I spent Saturday in a Greenland rolling class in Bowman Bay by Deception Pass with Dubside and Leon Sommé from Body Boat Blade. It was a small group (3 students on Saturday, I think 6 on Sunday) and the event was not highly publicized. We had students at all levels, some starting out with only a couple rolls. I was able to hit the norsamik masikkut (forward start-forward finish norsaq roll) and tallit paarlatsillugit paateqarluni/masikkut (cross arm roll) for the first time -- YEAH! I finally hit ariaammillugu (spine roll) also, but only in Leon's Romany, not my own skin-on-frame Misterie.  I was able to convince Leon that he really should try out my kayak and tuilik for a few minutes just so I could try that roll out in his kayak.  That's a lot of progress in one day after weeks of trying these rolls on my own!  One guy James broke his Greenland paddle.  Apparently the next day Sunday Leon broke the Greenland paddle he made 15 years ago -- ouch!

Dubside has relocated to Anacortes.  He's been living at Corey Freedman's place, the Skinboat School. He doesn't have a car so he hasn't been able to transport his kayak around to go paddling. There is a small pond nearby about 5-6 feet deep so he's been practicing his rolls there. The poor guy's been living a few miles away from world class paddling in the San Juan Islands and he's floating around in a pond!  I think about all the droppings I saw on the workshop floor from the pet goose at the Skinboat School when I was there.

Bowman Bay was incredibly busy for the fall. I saw as many kayakers as I did when I went there during the summer -- a lot of people going through the Pass. These people would wash down their fiberglass kayaks with fresh water from their water bottles afterwards. Oh man, <em>give me a break!</em> No matter how much you try to keep it looking like new, guys, it's still just an ugly fiberglass boat! (I'm really turning in to such a wooden boat snob!) 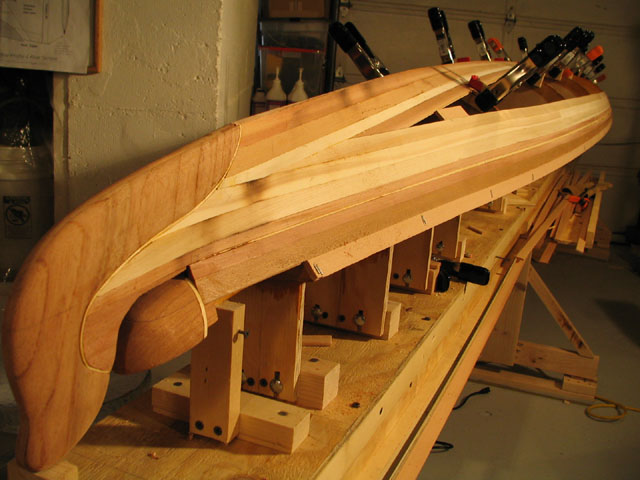 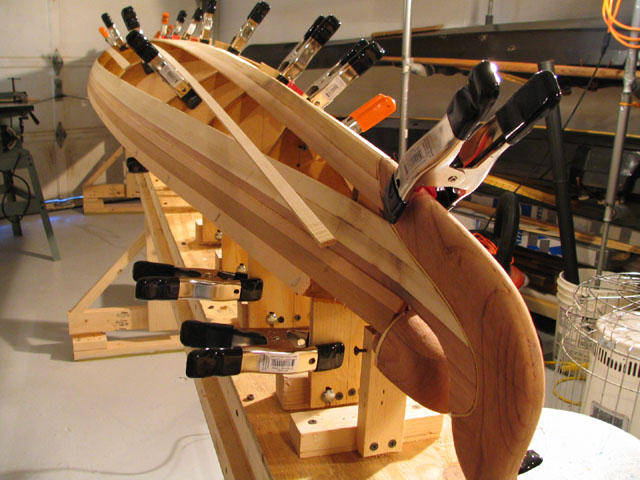 Spent a few hours today just putting on two more narrow strips along the keel. *Whew* It's been almost two months now since I started this kayak. If I were making a traditional skin-on-frame I'd be done by now. But building has been enjoyable and I got two new toys to play with: the Veritas sharpening system and a Shinto rasp. When you have cool tools, building is a real pleasure! Yesterday: got a chance to take out Necromancer and practice rolling. It was cold and windy. This time I wore my pfd to see if it made a difference with forward recovery. It seemed to make "reverse butterfly" easier. Also known as "modified storm roll" I think. But Necromancer also has a flatter hull and better initial stability so it's hard to say for sure. Another thing I learned: I still like Necromancer! 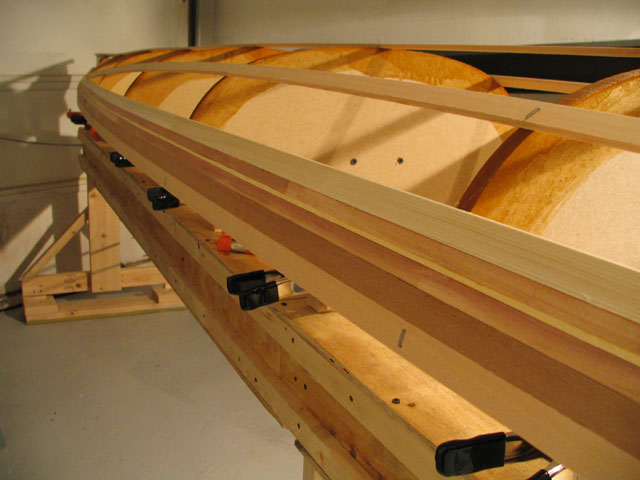 For the past few days something about the hull was really bothering me. After opening the garage door and looking at the kayak from a distance I realized that the half of the hull toward the stern was not fair. The unevenness could be seen as a waviness in the yellow cedar pinstripe. I couldn't figure out how it could possibly be uneven because I double checked all the measurements and everything was correct. I had already placed 4 strips on the hull, so I thought that there would be no way to correct the mistake without restripping at least the aft half of the hull. Then today I decided to try something else. I unscrewed a form from the strongback, then one that seemed to be placed too high (or actually too low, since the kayak is built upside down), and forced it down slowly (maybe as much as 3/16th of an inch) by ratcheting down a large clamp on each side of it. (No pictures of the process, sorry). When it looked like it faired out the sheerline and the pinstripe I checked for level and plumb and screwed it back into place. I repeated the process with one other form and now it looks much better. It might have changed the rocker a little bit and put some extra stress on the strips. Unlikely to affect the performance though (I hope). At least now it looks right. Another thing I noticed is light shining through gaps between the strips along the pinstripe. I'll have to fill those in with epoxy thickened with wood flour and Cab-O-Sil, and hopefully get the color right. There are all kinds of tricks to get around these mistakes. 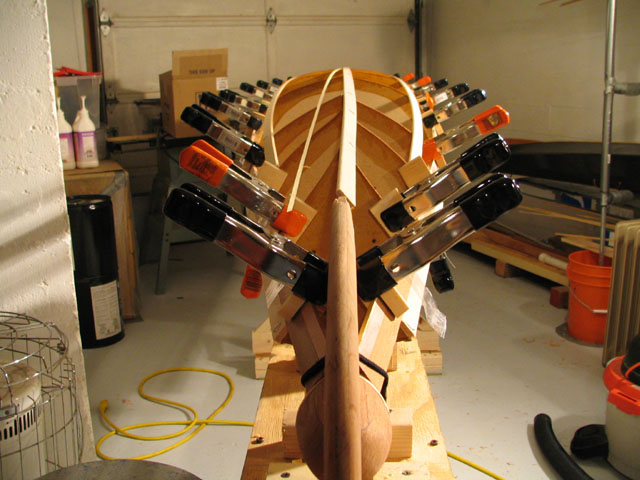 I bought a few more clamps -- only 99 cents each at Home Depot!  So now I can strip both sides of the kayak at the same time.  I put on one strip on each side today and a pinstripe on one side.  The pinstripe is a thin strip of yellow cedar. 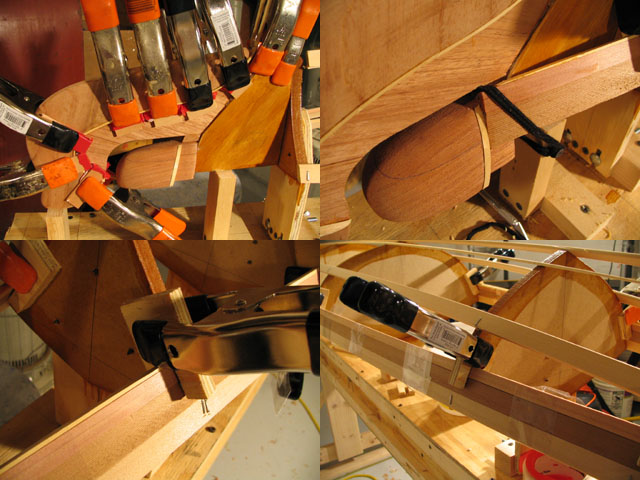 I also placed a thin strip of yellow cedar along the inside of the bow piece.  This was bent to shape in a tray of boiling water.  This is a "by any and all means necessary" stapleless technique, which uses a combination of hot glue, bungees, clamps, and packing tape to keep the strips against the forms and tight against each other. 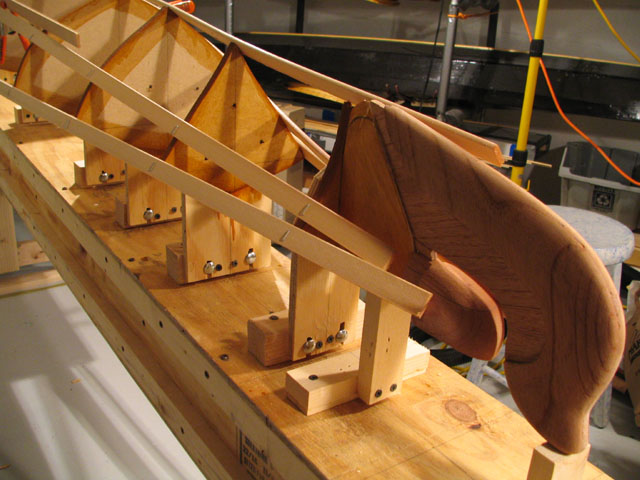 I stapled temporary strips to the forms to secure the forms to each other and the stems.   By looking at how the strips run down the kayak, I can check to make sure the hull is fair. 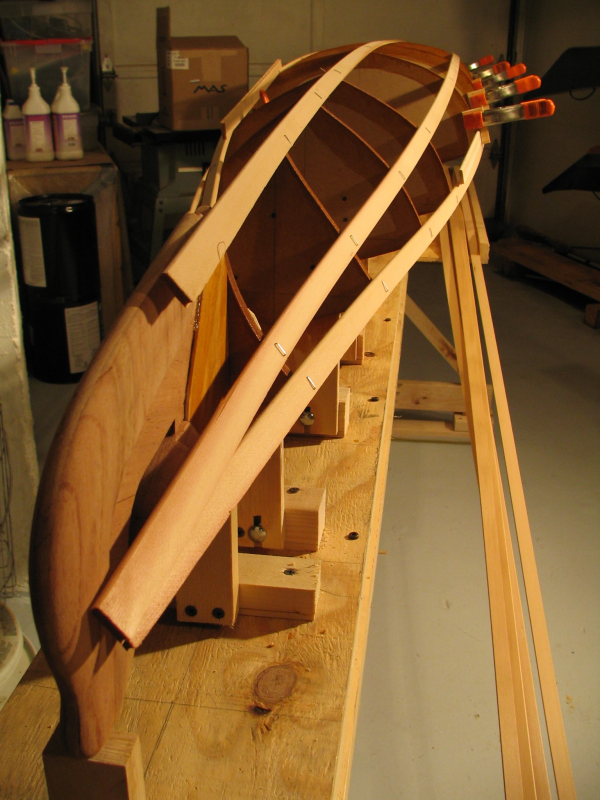 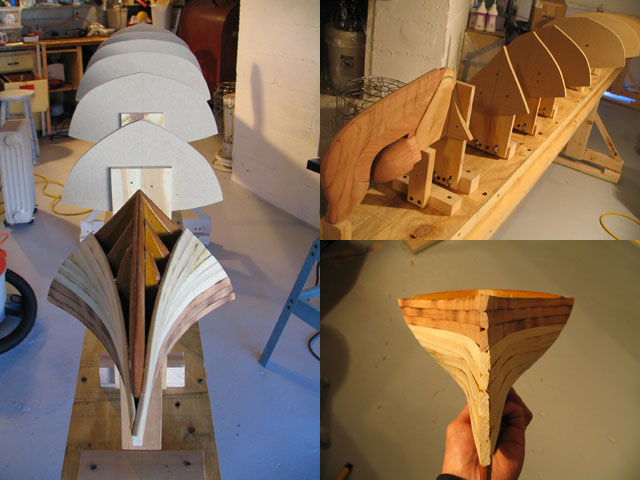 Day off from work.  Slept in until 10.  Added the carved bow stem and the stern stem to the strongback today.  This involved securing them onto the "L" brackets and checking the alignment with the rest of the forms.  Doesn't sound like a lot of work now but it sure took some time.

It was a beautiful sunny day so I went out to the beach for some rolling practice and a short paddle to the lighthouse.   There was one other kayaker in the water in a plastic orange boat.  He was paddling around the point by the time I got in the water and I never caught up with him.

If I do one type of roll I'll do ten in a row to make sure I got it down.  Repetition and some variation helps.  I'll change it by slowing it down, or try to add more "hip snap", or change the position of my legs, that sort of thing.  Somehow I was hitting my handroll only half the time today.  It's weird how that happens.  I must be doing something differently but usually I just attribute it to being tired.  Made more progress on ariaammillugu (spine roll).  Got under and back around OK but still getting stuck on the last part and I can't get my body back on the back deck.  I'm going to cut the straps off my tuiliq -- they've gotten caught on the horn toggles on my back deck and don't serve any real purpose anyway.

Cedar Strip Kayak Building: Forms on the Strongback for the Shooting Star Baidarka 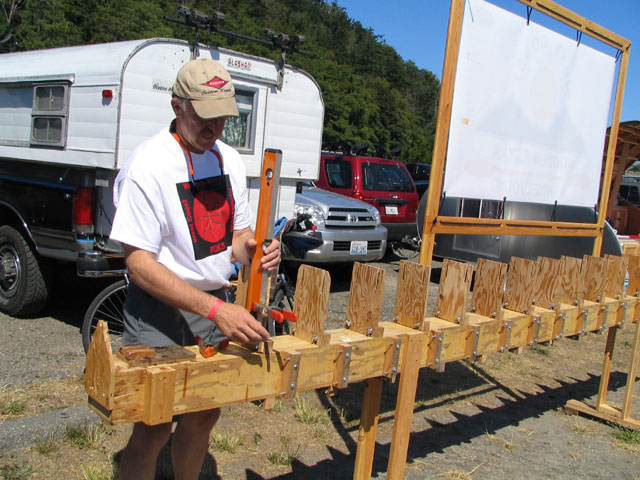 The Shooting Star is constructed using 12 "station forms" fixed along the strongback at irregular intervals.  Station forms are mounted on the strongback using "L" shaped brackets.  Experienced builders (for instance, Joe Greenley from Redfish Kayaks) say that it is not important that the strongback be level, and one only needs to use a level twice to build a kayak (that is, to level the end brackets on the strongback.  A string is then run between them to adjust all the other brackets).  I took Joe's advice (although I'm not building one of his designs) and made adjustable  "L" brackets with wing nuts.  Wing nuts are expensive (about $0.78 a piece!)  Then I used the level whenever I could, leveling the entire strongback side to side, end to end, and also checking each "L" brackets for level and plumb.  I ran three strings along the strongback: one for the strongback centerline, one for the centerline above the tops of the "L" brackets and one 14 inches above the strongback surface  to serve as a reference line for the amount of rocker.  Because the "L" brackets were adjustable, I was able to easily adjust them to correspond to the centerline.  Then I screwed them into place. 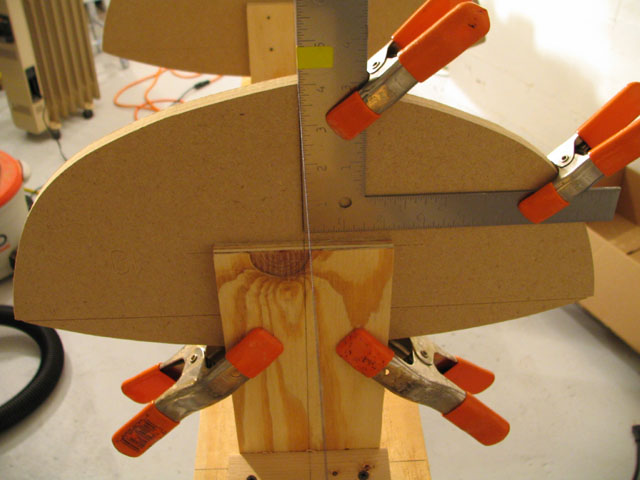 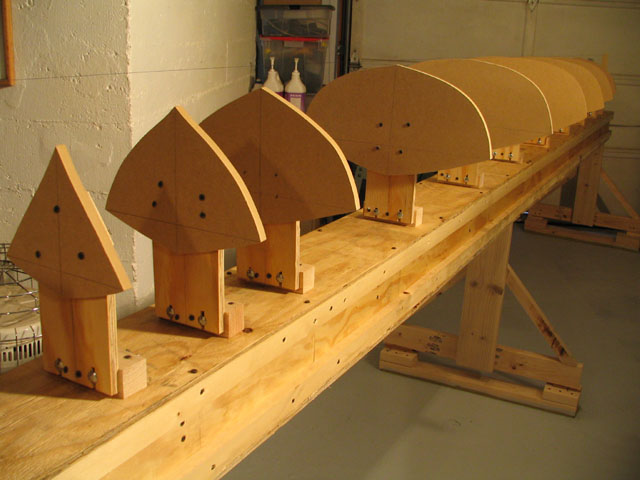 The next step is to mount the bow and stern stems, and then staple temporary strips between the forms to secure everything together for the real stripping.