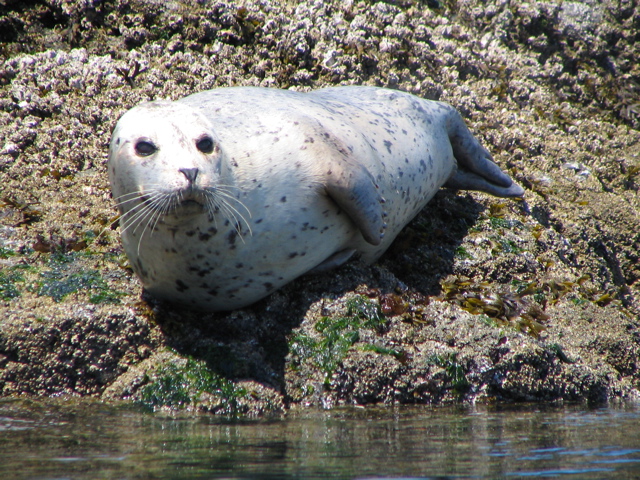 From my archives: seal at Doe Island, San Juan Islands

Back Hatch Design in Progress 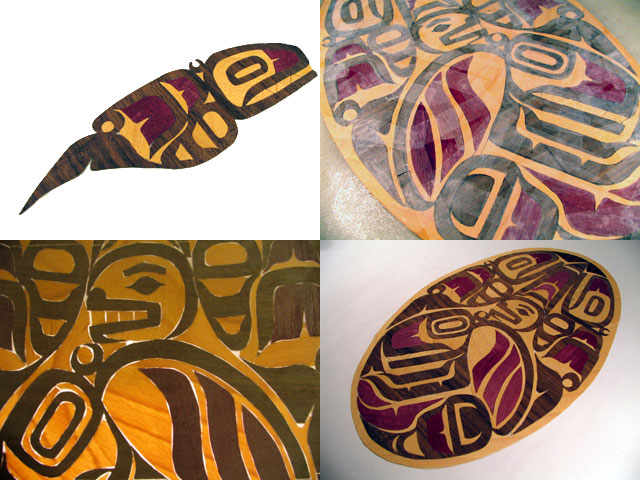 The veneer onlay is finished. I need to remove the mat of tracing paper and Scotch Magic Tape from the back and mark out where I'll glue it on the deck. See all the holes and cracks between the pieces? I'll try filling them with wood filler from the back this time before gluing it all onto to the deck. I posted my technique on the Kayak Forum today.

Paddling today: rolling practice at Dash Point, then to the lighthouse and back. My off side has really suffered -- if you don't practice constantly you lose it! 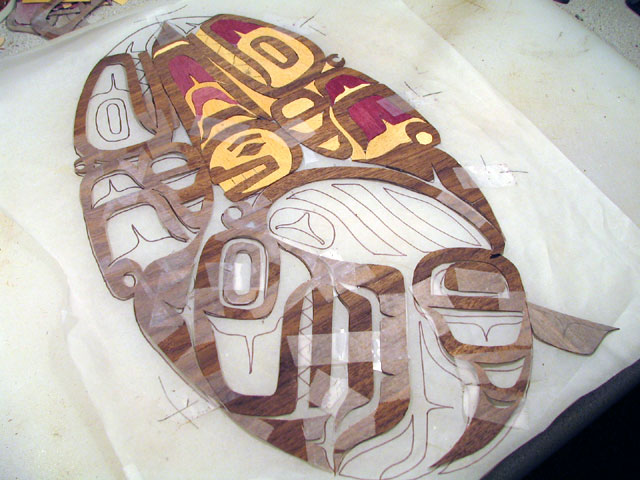 Kayak Routes: From Dash Point to the Tacoma Waterfront

Plying my usual route again: from Dash Point to the Tacoma Waterfront. It was a beautiful day -- clear and sunny, no wind, and flat water. The water was the clearest I think I've ever seen it. People were out on the beaches and parks. No other kayakers though except for a man in a short inflatable sit-on-top, probably fishing. At Brown's Point I saw big column of smoke rising up from what might have been a house fire.  When I got closer I saw streams of water shooting up into the smoke, maybe from firehoses. 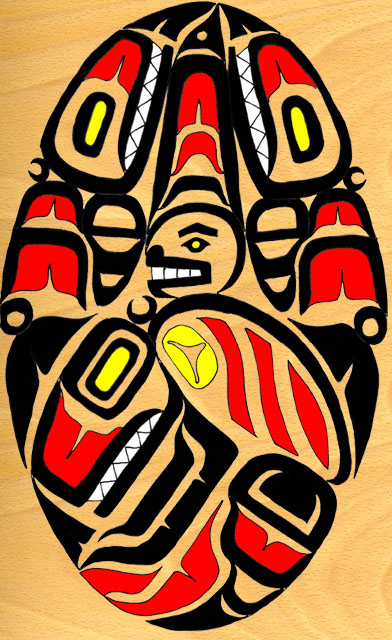 It turned out to have a lot more negative space than I wanted.  Also I think I'll simplify  the top filler pieces.  The yellow will be filled in with copper leaf.  I also have it simulated in wood inlay below.  I call it "Orcas of the Summer Moon" 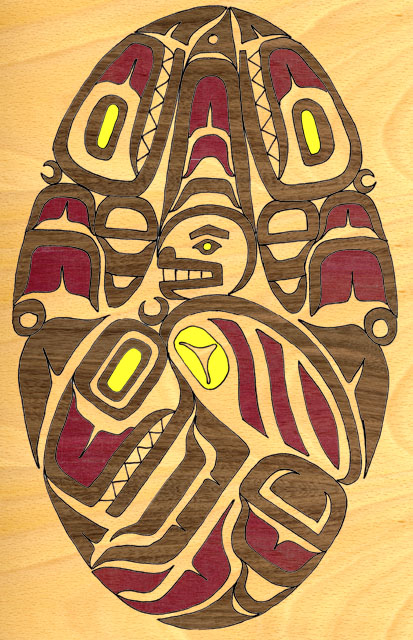 I finished the moon face last night, everything except the pupils. The last pieces of packing tape left a heavy residue of sticky stuff on the surface that was mixed in with excess yellow carpenter's glue. I tried sanding it off but it just gummed up the sandpaper. So I ran to Lowe's and got a bottle of acetone and rubbed down the surface. It got rid of the packing tape sticky stuff OK but softened up the yellow glue even more. I ended up scraping the entire surface with a scraper to get it all off. Then I slathered the whole thing with Elmer's wood filler and then sanded it all down by hand again. Then I taped blue painter's tape to the deck around the face to protect it and sanded the moon edge to fair into the deck surface.  Overall my method worked but next time I'll try to avoid sticking packing tape against the unprotected surface and limit the yellow glue to cut down on the sticky residue. Slathering the whole surface with wood filler wasn't such a good idea either because it ended up filling all the walnut grain with light colored filler which took a lot of sanding to get out. 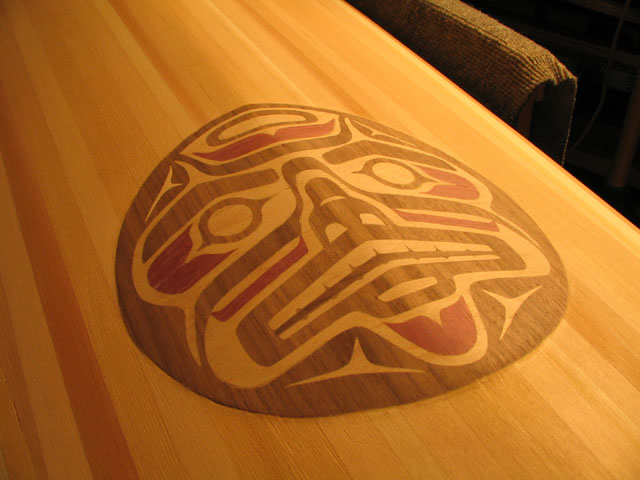 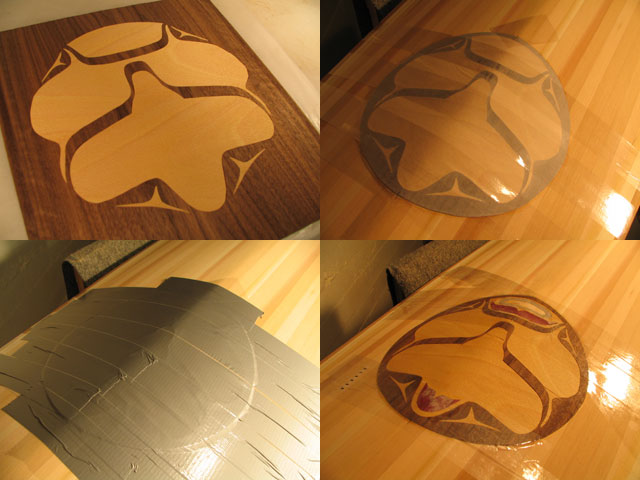 I cut the pieces of the moon face out of veneer again and stuck them on a piece of tracing paper with spray adhesive. They fit together very tightly. Then I brushed some Titebond II yellow carpenter's glue onto the deck and pushed the veneer firmly in place. I held it down with several pieces of clear packing tape and when I ran out of that started putting down several pieces of duct tape, rubbing it firmly so it was completely flat. Then something I didn't anticipate happened: the pieces of beech started wrinkling and pushing the tape up.  I could feel the wrinkles under the tape, and I kept trying to push them back down, but it wasn't working. I let the glue dry about an hour. When I came back I carefully lifted some of the tape off to reveal all the wrinkles. The glue was dry but the beech pieces had awful wrinkles along the edges.  That's what I get for trying to make this up as I go along! I should have used contact cement! I threw my hands up in despair, left to get coffee at Starbucks and along the way got called in to work. So after a few hours at work I came home, armed with some needles and syringes I was going to use to inject more glue under the wrinkles. I also referred to the veener work in the building instructions. Apparently Rob Macks also uses yellow capenter's glue for veneer work, so I wasn't really all that wrong. He uses an iron to flatten the veneer so that was another idea I could use. When I finally got back to the workshop though all the wrinkles were gone and a few cracks had formed. I guess the beech has very poor dimensional stability and expands and shrinks severely with changes in moisture.  Good enough!  I spent the rest of the evening inlaying some of the moon face shapes on the main part of the onlay. 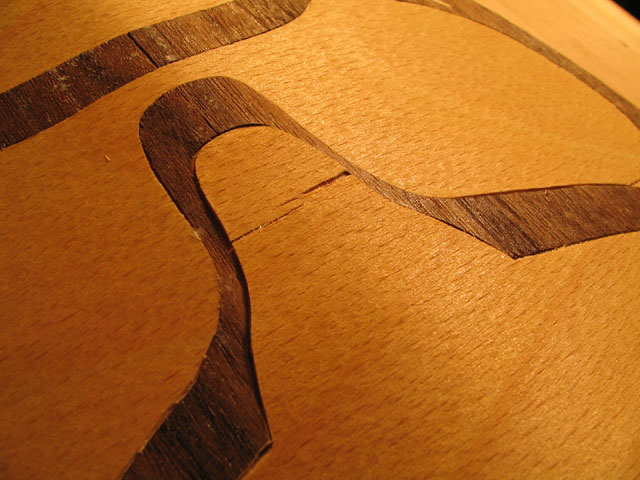 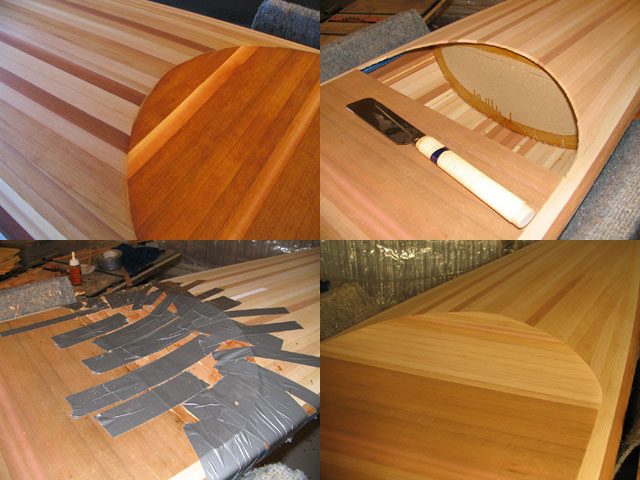 After stripping the entire deck and making the cockpit recess I was really bothered by the joints along the back recess and the deck. There were some big gaps in the joint. I filled them with Elmer's Wood filler but it ended up looking like a pretty poor stripping job. I didn't think that I could really do anything about it until this morning when I decided to cut out the back of the recess and strip it all over again. I took a razor saw and cut along the joint after marking it out, and then I made a cut across the recess. I re-stripped it, holding the strips together with duct tape until the Gorilla Glue cured, and then sanded it down. I completed it in a day, and other than the difference in color (I ran out of dark Western Red Cedar) it looks a lot better. There are some small gaps in the joint but I think after a small amount of filler it won't call attention to itself. This just demonstrates how with stripping there are many ways to correct the mistakes as you go along. As far as the hatch decorations go it was a big step backward. I completed the moon face and prepared to glue it to the deck. First I marked out the deck and brushed some yellow glue (Titebond II) onto the backs of the veneers. Then I laid the veneers down onto the deck. I've never worked with veneer before so one thing I learned is that if you apply glue to one surface of a veneer it curls up and becomes almost impossible to work with. I tried taping it down with packing and duct tape but just ended up making a big mess. Then somehow the pieces didn't fit together anymore. So I ended up pulling it all off and soaking the pieces in hot water to get all the glue off. I scrubbed down the deck again to get the glue off and sanded it down. The veneer cutouts recovered OK after they had dried. Then I thought I could stick them together using some tracing paper as a "backing" with spray adhesive. I could then apply the whole thing to the deck with the paper on it, paper side up, and after the glue had dried peal the paper off. But the pieces still wouldn't fit and it ended up breaking apart and making a big sticky mess, so now I have to cut out all new moon pieces again. Plus now I need to order more veneer for the back hatch decoration. 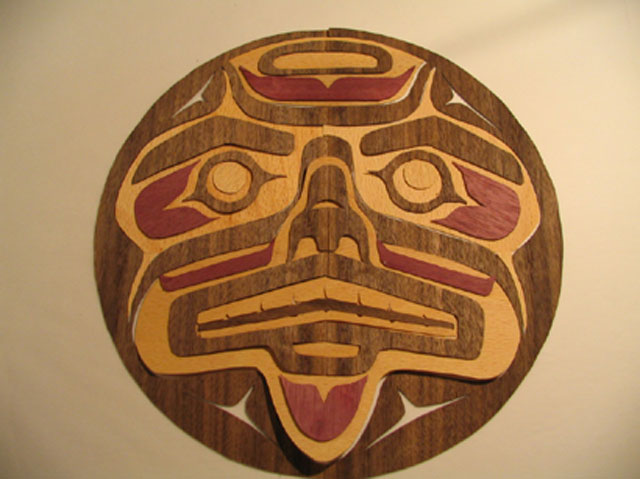 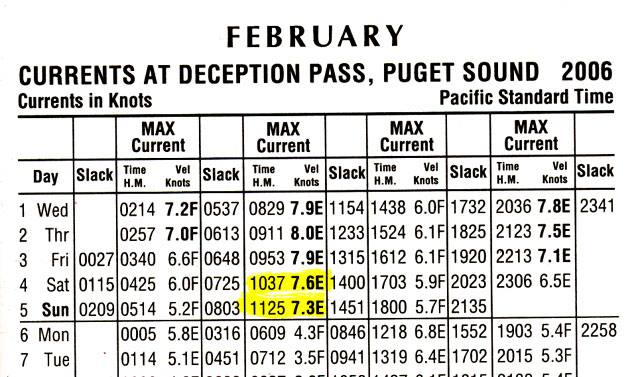 I couldn't have asked for a better day to go to the Pass: dry and clear, no wind or waves, and a 7 knot ebb running through at late morning. I left home at 0800 with Necromancer, got to Burrows Bay at 1030, after making a quick stop at Haggens grocery in Burlington for some eye glasses retainers, since I left mine at home. I saw a couple trucks parked at the beach with kayak racks, and a woman getting her plastic rec kayak out of her truck. It takes about 15-20 minutes to paddle to Canoe Pass, the smaller waterway where the kayakers usually play that runs parallel to Deception Pass proper. I launched right about 1100, just in time to get there when the ebb was really moving.

There were a couple guys in an Explorer and and Explorer HV -- obviously trained by Shawna and Leon! I paddled into Canoe Pass right into the current. Necromancer is so light (24 lbs) and carries no inertia so the current just jerks her bow right around. I brace downstream to keep upright. In the main current it works, but in the mushy random boils and whirlpools I capsized a couple times but rolled up OK. Some of the whirlpools were big. They turned Necromancer right around so I'm left facing upstream. It was a struggle to get back out of the current along the rocks.

I got the attention of the guys in Explorers, Steve and Earl. Steve is an instructor and a 4 star BCU paddler. He liked the Pass so much he moved here and lives 3 miles down the road. He has a Greenland paddle on his foredeck. Earl lives close by too. He's wearing a helmet. We talk about Shawna and Leon. They are building a new house! Apparently Dubside shows up once in a while with Shawna and Leon at the Bellingham pool sessions. Greenland style is gaining in popularity. After about an hour the current died down and Steve and Earl left. Steve told me to go to the Sea Kayak Skill Building group on Yahoo (SKSB-NW). He says it's a forum where all the serious local paddlers hang out and plan trips.

I played around a little bit longer in the current, then headed around Deception Island and then back to Burrows Bay. On the way back I saw someone else in a kayak heading toward me. It's Josh the Kayak Dude and he has a Greenland paddle! He said he just had to get out today. I said yeah, it's great that it cleared up after all that wind and rain. He seemed like he wanted to move on so I said bye and headed to the beach. While I was packing up Necromancer I saw him heading back and then he started rolling in the Bay. I walked back to the beach still wearing my drysuit and said, "Hey you've been practicing!" He showed me his paddle and norsaq that he just finished. He did a great job on the norsaq and fitted the ends with HDPE, but it's really short. We talked about rolling and Dubside. I wanted to get Necromancer back down off the car and do some rolling with him but I was too tired.  He kept practicing in the Bay as I left. In the car on the ride home I regretted leaving so early -- it would have been fun to practice rolls with him. 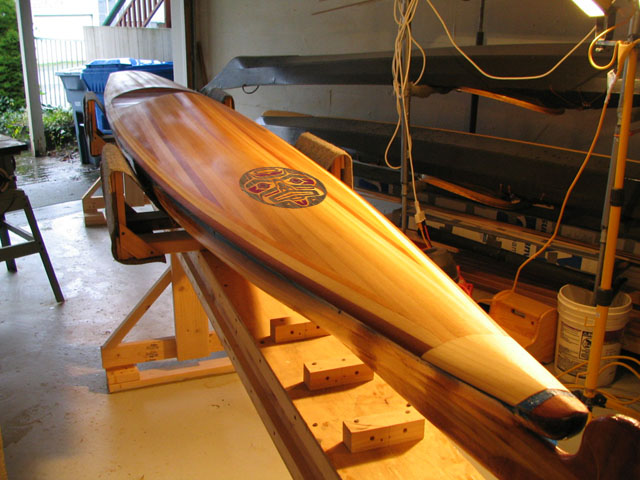 I took the moon image and pasted it on this picture of the kayak to simulate what it would look like. I love Photoshop! I couldn't find any abalone shell at the local craft store so I'm thinking about going with gold leaf for the eyes and teeth, maybe even around the entire moon. 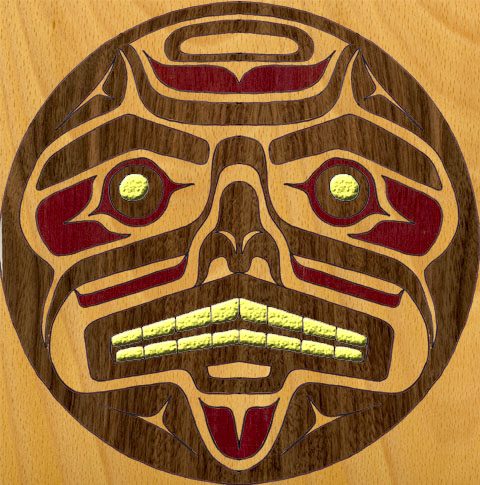