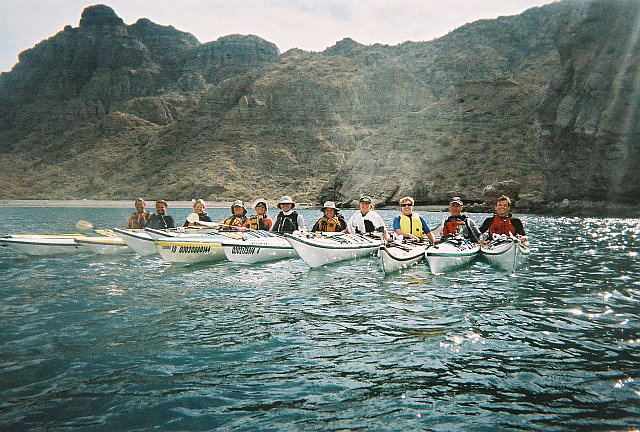 I wake up in the middle of the night to sounds outside my tent. Something is moving and it doesn’t have a headlamp on. Then I hear breathing. It’s very close. I lie still. Should I get up and look? I slowly feel for my headlight but don’t find it. I lie quietly for several minutes. It seems to go away, maybe down to the water. I fall asleep. I see a dark shape through the mesh window of my tent -- the hind end of an animal, like a big  dog. I think that was a dream though. But I definitely heard something.

At breakfast I ask if anyone else heard anything. No one did. Noah says that there are a couple of coyotes that live here though. One night he was sleeping while they came up about 3 feet away from him. Noah doesn’t sleep in a tent. Since he was downwind they didn’t notice him until he woke up and scared them away.

“They like to lick the dew off the tents,” he says. “They’re actually pretty small, about the size of foxes.  You could take them on.”

He says that another time at the same beach about 50 cows invaded the camp in the middle of the night.  People were pulling up their tents and scrambling to find somewhere else to sleep. Practice on the water today is a review of everything covered in class. The wind picked up the in afternoon, blowing us out away from the protection of little cove. I’m in the big Tyee, trying to scull for support on my off side. I capsize, then try to roll up. My blade angle is wrong and my paddle dives. I’m almost falling out of the huge cockpit underwater. I pull myself back in, brace with my knees against the deck and try rolling up again but don’t make it. I know I’m rolling against the wind, and should try again on the other side but in frustration I wet exit instead. I can’t believe it! I don’t remember the last time I missed my roll and had to bail out. Noah comes to rescue me.

“It happens to the best of us,” he says.

I hate feathered euroblades and swear never to paddle with one again after this trip.

It’s the last night. Noah has been busy for the last hour squeezing all the leftover limes into a big pot, using a headlamp now that it’s dark. I go to my tent and dig out the same fork and blue plastic bowl I’ve been eating out of all week long. All anyone really needs for camping is one big bowl and a fork. Don’t bother with the titanium forks though. They are cool but if you lose them which is bound to happen then you’ve just lost a really expensive fork.

“Time for margaritas!” someone says.

Apparently that’s what Noah was working on for the last hour. It’s a little warm without any ice but otherwise an awesome field margarita! John is walking around pouring extra tequila in everyone’s mug.  “We gotta finish it all before we get back!”

After dinner we sit on the beach and the water starts to sparkle as it splashes against the rocks. The bioluminescence is here early tonight. We throw rocks into the water, lazily at first, then more regularly.  The splashes glow. Gay takes out a paddle, stands in the water and starts sculling across the surface, stirring up swirls of light. Then Noah gets his kayak and launches into the darkness. He’s making circles in the cove but I can’t see him except for the occasional glowing splash from his paddle. I reach down into the water and scoop up a handful of stars. It’s magical.

[Thanks to Jackie for the great pictures]