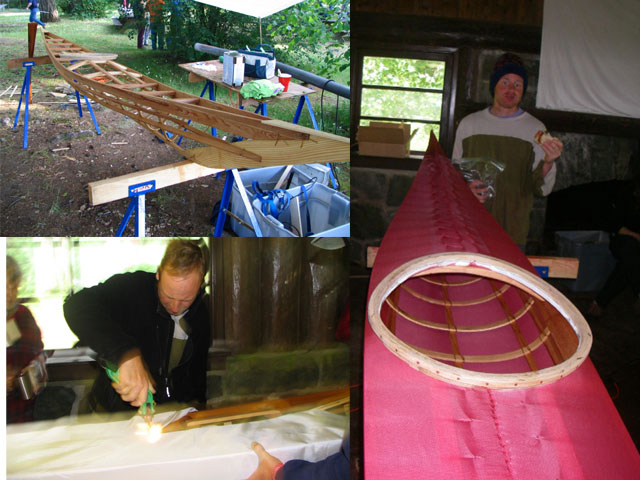 At SSTIKS Brian Schulz made a kayak in three days. He put the frame together on Friday and Saturday during the boat-building demo including steam bending the ribs, and stitched the skin on Sunday. I left Sunday afternoon, so I had no idea if he got as far as waterproofing it with two-part polyurethane. That would have only taken another day before the kayak was ready for the water. He acomplished all this between time messing around at the beach and promoting his boats and boat-building classes at Cape Falcon Kayak.

Recently Brian commissioned the production of float bags made specifically for skin-on-frame boats and now offers them for sale through Cape Falcon Kayak. He says they are a must-have safety item and are tougher than commercial bags - "the largest, highest quality float bags on the market". He makes no profit from their sales. “My goal is to bring skin-on-frame kayaks up to the BCU standard as far as safety,” he says. They fill the kayak so well that he has been able to paddle 4 miles in a flooded boat with float bags installed.

On the water he demonstrates a self rescue in a flooded skin-on-frame replica without float bags. He does a reentry in the water into the small ocean cockpit and secures his tuilik, but the stern sinks deep underwater. He sticks a bilge pump through the neck opening of his tuilik and starts pumping. “Where I paddle on the Oregon coast you have to come up with solutions or die,” he says. Water starts to pour out of the pump and the bow begins to rise, maybe and inch or two, but then it stops. “I think I’m sucking up my cock!”  No air can get in through the vacuum seal formed in his tuilik and into the kayak, so he remains submerged. So much for that solution.

[Thanks to Dick Mahler for the pics]

Posted at 10:37 PM in The Art of Greenland Style Sea Kayaking | Permalink | Comments (0)