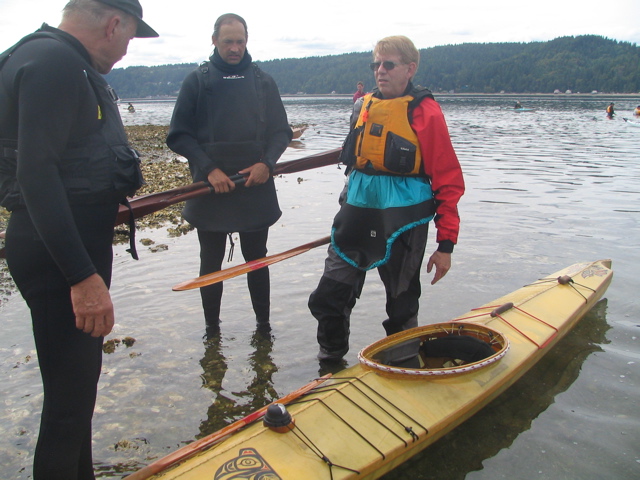 Some time ago I thought about carving an Aleut paddle. After meeting Jim Mitchell at SSTIKS I wouldn't even attempt it on my own. This guy knows Aleut paddles! Beautifully finished and carved out of western red cedar, they are exceedingly lightweight. Don't try any Greenland rolls with them though -- they might snap. They specialize in going forward. 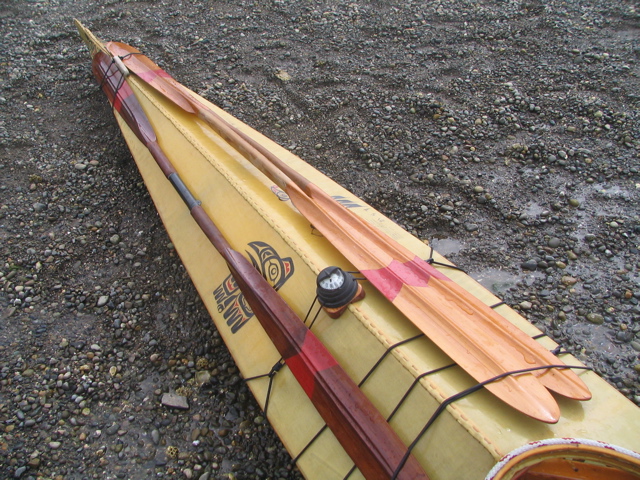 Aleut paddles on the foredeck of Jim Mitchell's Raven 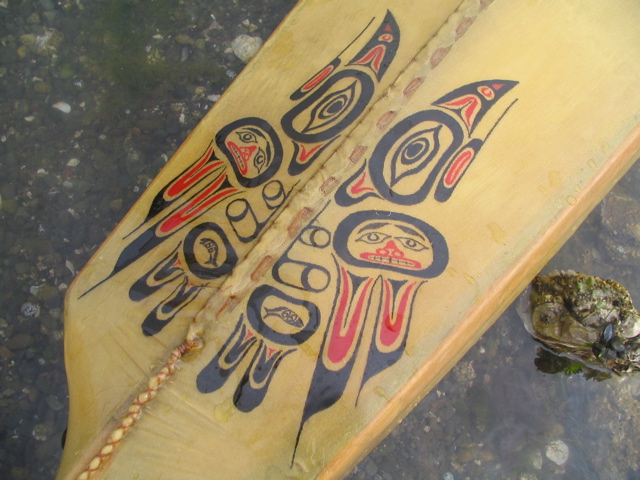 With Jim in his skin-on-frame baidarka Raven, and me in Moonlight Dancer, he showed me his technique for paddling with an Aleut blade. From what I can remember, it goes something like this: Reach as far forward as possible and plant the blade deep into the water. Rotate your upper body and pull back in a line close to and parallel to the gunwale, keeping the paddle vertical and with your outboard hand touching the water until you reach your hip. Then completely loosen your grip with the outboard hand and let the paddle rise out of the water from its own buoyancy. Grip the paddle as loosely as possible during the stroke.

His paddles feel so well balanced. The blades are very thin. They pull through the water smoothly with no flutter, and exit cleanly with no noise. The loom in cross section has almost a triangular shape. The grip feels natural.

He showed me another Aleut prototype, a paddle with a central groove. I forgot how the groove works but it is a more powerful blade.  He talks like an engineer, in a language I don't understand. Someday I'll have to take him up on his invitation to his workshop to carve one of these. By the way his best friend is Werner, as in Werner Paddles. He's tried to convince Werner to make a traditional paddle out of composites, but with no luck so far.

If Werner would make some composite traditional paddles, I might become a customer.

Thank you so much for your kind words!
A couple people have asked about a paddle workshop this winter, and I am considering it. If anyone is interested in building their own Aleut paddle, please email me. We will see what we can put together.