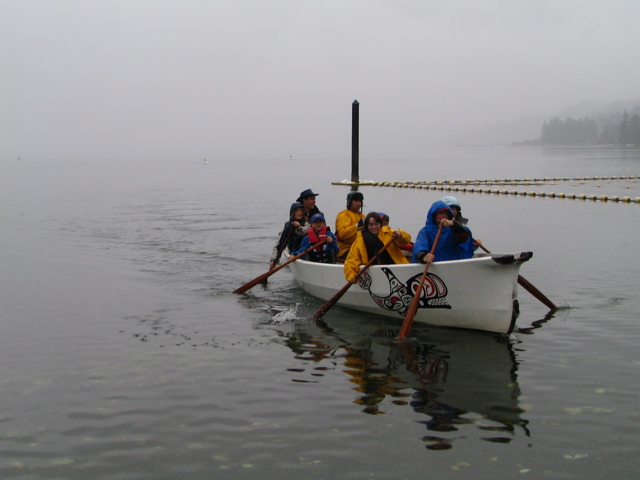 On the wet Sunday morning at SSTIKS a handful of us gathered to watch as a white umiak floated in to our beach. The umiak, or “women’s boat” (in this case paddled by several girls of the local 4-H chapter) is an open arctic skin boat propelled by paddles, oars or sail, and in recent times by outboard motors. It has been used for family migrations, carrying cargo or passengers long distances, and also alongside kayaks for whaling and walrus hunting. Skin-on-frame construction permits building a large boat with a minimum amount of material, and results in a lightweight craft that can be easily transported by sled or manually over long distances, yet strong and flexible enough to resist the shock of ramming ice. A two thousand year-old kayak model found in a cemetery in Siberia exhibits features that suggest that the kayak is a descendant of the umiak. Some scholars believe however that the umiak and kayak existed side by side in the arctic from the very beginning.

Corey Freedman helped build this umiak for the local 4-H club. The skin is nylon, I think coated with marine antifouling paint.The skin has lasted over 15 years, with occasional repainting. It is left in the water year-round. 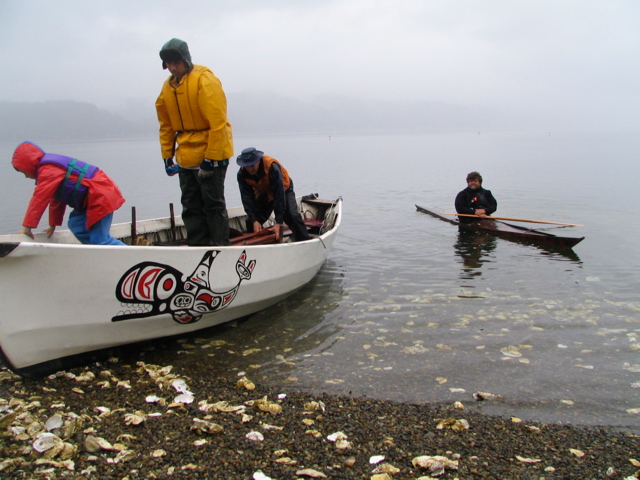 Hi Andrew!
My compliments on your interesting blog and the great kayaks you built.
I am fascinated by the Umiak. On the kayak-treff of Spiekeroog 2006(Germany) the family of Hakola arrived with a very original one:
http://kajakwoerden.blogspot.com/2006/06/spiekeroog-day-4-9.html
for a close up:
http://www.mijnalbum.nl/GroteFoto=S7OUTA8E
Hakola also built the rolling skin on frame kayaks of Freya Hoffmeister. It's a small world!
greetings,
Hans