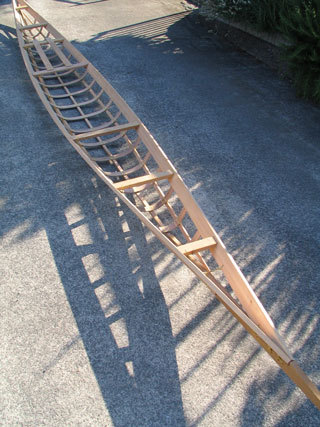 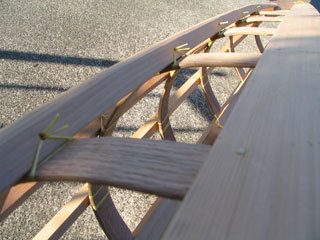 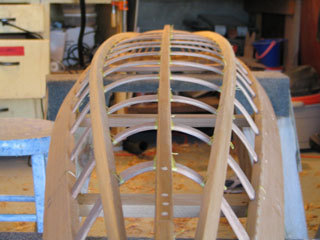 Although I've been cutting some corners to save time on this kayak, at this stage I actually slowed down and put more work than usual into building.  The keelson and chine stringers are typically lashed to the ribs with one long piece of artificial sinew that wraps around the ribs and down the length of the kayak.  This time I've decided to use individual lashings because on my last two skin boats I've noticed that the lashings have come loose, and some have even broken from abrasion against my sandy neoprene booties over time.  I've drilled holes through the keelson and chine stringers for the lashings.  One big advantage of doing this, other than avoiding having the lashings protrude from under the skin, is that you can position the stringers first and plane the edges and continue to shape them after they are installed.  If the lashings went around the stringers you have to do all the final shaping before installation.

Some measurements so far:

It still seems a little high at the backrest!  I've been in kayaks that feel very comfortable without any backband or padding on the backrest.  I think it's because the backrest is so low that it rests against your sacrum.  Once it starts touching your lumbar spinous processes than it starts to hurt.  Now I need to make some comparisons with Dick's East Greenland replica.

It's looking great! I can tell you that it's a great kayak -- a friend of mine has built a replica of this same kayak. It turns amazingly easily, and he's often adding a small strap-on skeg for longer paddles. It's a very fast kayak!

Keep up the good work! I am looking forward to following the rest of the building process.

Thanks, Magnus. Good to hear from you. Of course, I've followed and been inspired by the construction of your last two kayaks, the SOF Black Pearl and Lc.148, both East Greenland style kayaks. And in fact, the strip Black Pearl was based on "Chapelle Fig. 208", which is the drawing I'm working off of, so they are all related.

Funny -- the beautiful "Hope Island" photo of your Misterie was partly what made me go for a SOF build in the first place!

And yes, the "208" has a lot of offspring. Here's my SOF Black Pearl (not with me in it though), and Sten E Karlsson's "208" replica side by side on an early spring paddle (hence the drysuits).