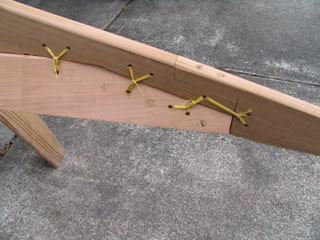 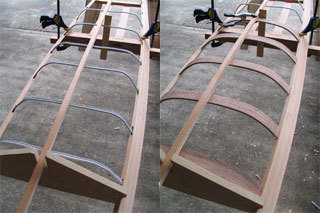 Some Greenland kayak stems are constructed out of two or three pieces.  I've always wondered why and now I know.  If you don't have a big enough piece of wood to make it out of one piece you can make it out of two or three.  Also it's easier to get a couple pieces to fit around the end of the gunwale rather than carving a notch in one big piece.  Building in a traditional way makes these little discoveries possible.

I like to determine the rib length and cut the ribs to size and trim the ends to fit before I steam them. The easiest way to determine rib length is to use Romex or heavy wire to mock up the hull shape.  This hull is easy to shape because it is flat on the bottom and the sides follow the gunwale angle. Let me put to rest any lingering doubt that kiln-dried red oak from the Home Depot or the local lumber yard will work as steam bending stock.  It works!  I ripped the ribs 1/4 in thick x 1.5 in wide and started soaking them 7 days ago.  Why 1.5 in and not 1 in wide?  Because I cut the ribs from an oak "2x4" which measures 1.5 in wide.  Plus my routing jig left over from the last two skin kayaks was set up for 1.5 in.  I steamed the ribs one at a time for about 8-10 minutes, then bent them in a jig with a leather backing band, then stepped on them with both feet in the middle while pulling the ends up, the same way Maligiaq does it.  The oak bends smoothly, not like rubber and with a lot of "springback", but it's a LOT stronger than yellow cedar which is my usual bending stock.  I only broke one rib, the tiny one on the end, and that was because the steamer ran out of steam before it was fully cooked. 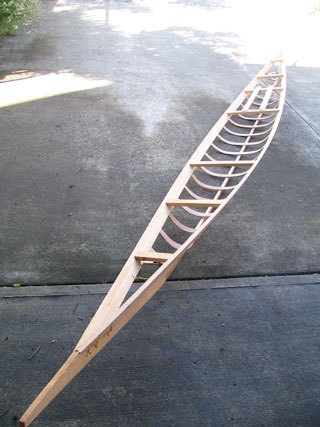 This kayak is going to have a sweeping sheerline.  That's because of the severe gunwale angle.  It's also going to have quite a bit of rocker.  I figure it's easier to fix too much rocker by adding a skeg or keelstrip than not enough rocker.