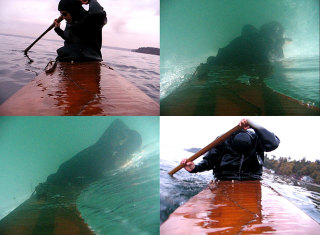 I've read a few boatbuilding manuals over the last year.  One of the things they say consistently is that building a boat can be a huge project.  In order to get through it you have to break it down into several small managable steps. If you try to visualize the entire project you may be so overwhelmed by the enormity, you may never even get started.  But by working steadily and consistently a little bit every day you will eventually get it done.  Building a boat can be difficult, but cutting wood, spreading epoxy, painting and sanding are easy.  Great things are accomplished one step at a time.

So what does that have to do with rolling?  The pic is kingukkut tunusummillugu by the way.  A year ago I would have never thought that I would be able to do some of the rolls I can do now.  I don't feel like I've been training particularly hard at it, just getting in the water and having fun.  I might go out for an hour at a time and feel like I didn't accomplish anything.  It doesn't make for much of a workout. To make it worthwhile I'll try something new -- like taking a chance at that impossible roll.  The process of learning a new roll for me goes something like this:  First I practice capsizing in the setup position.  After I get the capsize down (in those lightweight skin-on-frames, it actually can take a lot of twisting and sculling just to get under), then I'll try the sweep slowly, telling myself that it doesn't matter that I won't get up.  I just want to practice the motion and avoid injuring myself.  The recovery is simple -- it's going to be either laying back or leaning forward.  From then on it's just a matter of trying it out with variations, like adding more power and adjusting the paddle position and the timing.  Oh yeah, sometimes I'll review the roll on video in Rolling with Maligiaq or Greenland Rolling with Dubside or where ever I can find it on the internet.  Then comes the moment when I'll get it for the very first time.  That moment convinces me that it really isn't impossible.  From then on it's just a matter of practice to be able to do it consistently.