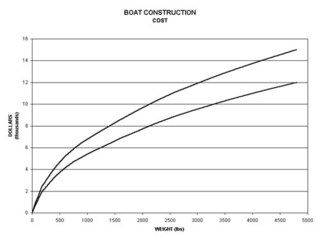 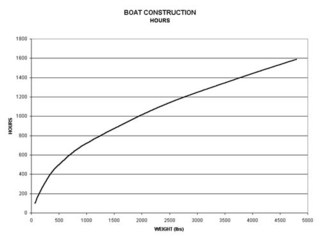 I'm preparing to launch into my next winter boatbuilding project, ordering plans, selling off kayaks and trying to figure out how I'm going to make space in the workshop.  This project will definitely not be as intense as the last two, because I want to spend more time paddling.  I'm planning to build a 15 ft sailboat.  Of course, one of my good paddling friends says I should build something like a 24 ft sailboat, with a cabin and a head, because he knows that I'm going to want to take the whole family cruising on big trips across the ocean weeks at a time.  "You think a 24 ft boat is big?" he says.  Well, if I'm going to build it, yes I do!

I happened to find these graphs on the Chesepeake Marine Design website, which illustrate how the cost and time to build increases steeply as the weight of the boat goes up.  The boat I'm planning to build, the Windward 15, weighs 250 pounds.  The Windward 24 (24 ft long with a cabin), weighs 2800 pounds.  So that's 1200 hours to build the bigger boat compared to 300 hours for the smaller one and about 4X the cost.

The issue of building time was already well thought out by Chapelle: "Most amateur builders do not care to spend more than a year in constructing a boat.  The exact number of hours required to build a boat is an important consideration, particularly as the amateur builder usually works after business hours and on holidays and weekends.  If a man is building a boat alone, he would work over 936 hours a year if he spent two hours every week day and eight hours every weekend on the job.  Of course, very few men with this amount of time to spend in building would actually be able to do so; in practice they would probably have trouble reaching a total of much over 700 hours."  That's from the second paragraph in the first chapter of Boatbuilding, 1941.

"Most people own a boat larger than they need or want...  On a typical weekend between May and September only 3-5% of the boats are away from their moorings or marina berths..."  That's from an article titled "Small Can Be Beautiful" on the Classic Marine website.  I guy I used to work with bought a motor boat a couple years ago.  He would talk about it endlessly at work, about how he had to have a carport made by the side of the hourse so he could have a place to store it, about all the parts he bought for the engine,  and how he had to prepare for the winter.  Mondays during the summer I would say, "It sure was a beautiful weekend.  Did you get a chance to take your boat out?"   He'd say he didn't for whatever reason.  And he never took it out on the Sound, thinking that the saltwater would destroy the engine.  Last I heard he was going to try waterskiiing.

If you've spent any time talking with boatowners I'm sure you've heard similar stories.  I bet kayakers get much more enjoyment from their small boats than big boat owners.  We're not dealing with trailering, engine upkeep, paying for moorage and fuel, and worrying about carbon monoxide poisoning.  We go out when wind and rough water keep other small boats in.  If you can roll then capsizing is not an issue.  We can put in and take out just about anywhere there is a beach, paddle in close to cliffs and rocks, play in tidal races and surf, silently sneak up to waterside houses, and dart between pilings, and under docks.  My favorite kayak now is my skin-on-frame, which probably cost me $250 in materials.  I can wear it on my head like a hat to the beach and go out almost every day. 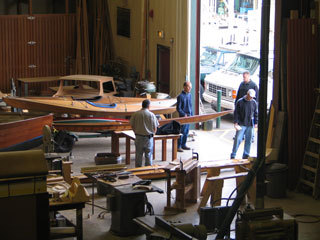 Dick invited me to bring my kayaks and speak about kayak building at the Bates Boatbuilding Program in Tacoma the other day.  It was something we had been planning since we first met at SSTIKS in June.  I brought Moonlight Dancer and The Jewel and talked briefly about both strip and skin-on-frame construction, incorporating a little about what I knew about traditional design.  I also talked about the features I look for in a kayak from the perspective of a paddler.  Dick introduced me as an “expert” on skin-on-frame kayaks.  In the land of the blind the one-eyed man is king!  I don’t think these kids were impressed with any bogus titles.  However they did react positively to my work.  I do enjoy giving little presentations once in a while.  It is a real test of your own knowledge to attempt to teach someone else what you think you know. 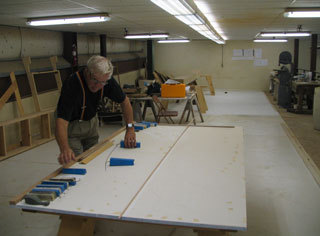 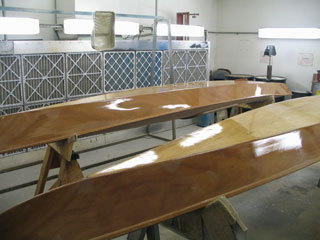 Dick is a volunteer at the program and benefits by having 5000 sq ft of shop space and 8 band saws at his disposal.  They also have a lot of other neat tools, a library and painting/varnishing room!  With some ugly old fiberglass and metal hulls lying around, it’s not as charming as Seattle’s Center for Wooden Boats, but has a whole lot more build space.  Dick is currently building a Joel White 16 ft Shearwater (pulling/sailing boat) in the loft.  They actually “loft” the boats there, that is, draw the plans out full-size on the white-painted floor. 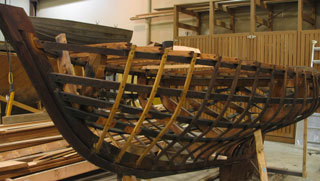 Here is another comparison of The Jewel with the Chapelle drawing [click on the photo for a bigger picture].  It looks like in my version the sheer is a little more pronounced and I may also have added more rocker, but not much.  I can always say that Chapelle got it wrong because the museum piece was hogged from being stored upright for so long.  Who really knows? 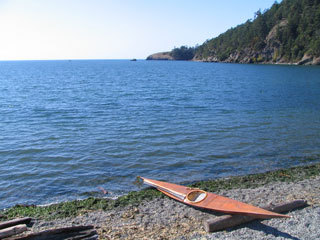 Ooooh, am I sore!  I'm walking around bent over like a stiff old man today, trying not to move my back and chewing ibuprofen.  I blame it on the four hours of driving to and from Deception Pass yesterday and all the recent stretching I've been doing trying to improve my forward recovery rolls. There is a numb patch on my right backside that follows the S1 dermatome -- ominous for a little herniated disc and radiculopathy.  Is that why my right foot keeps going numb?  After paddling just about every afternoon last week I'm spending this evening watching a movie.  Good thing I made sure my disability insurance was paid up. 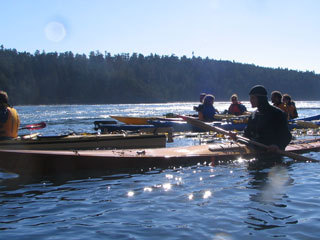 RECAP ON YESTERDAY'S TRIP:  I take The Jewel out to Deception Pass to try her out in rough water.  The mid-afternoon ebb is at 4.7 knots -- "mild".  Even though clouds are forecast it turns out to be a beautiful sunny day.  There is a group of kayakers at Canoe Pass when I get there, including Warren. Most of the group is a class from my favorite little kayak shop, Northwest Outdoor Center, plus Steve Walls and Leslie.  I paddle up and get in the long line of people waiting to get into the current.  Hey, Warren, let someone else have a turn! 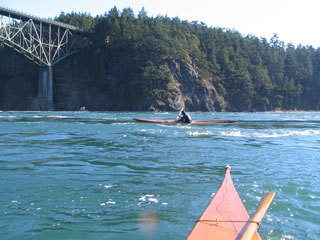 In Canoe Pass the current is swift but the water flat.  Not too interesting.  Finally I speed off into the current, brace and float downstream.  For a little excitement I do a butterfly roll.  First roll at The Pass!  The Jewel feels good.  I feel stable sitting low as the waves from passing motor boats surge by.  I'm not fighting my boat as I turn and paddle back through the eddy.

This kayak is simply awesome!  I really got it right this time.  This design begs to be built again and again in different versions, skin-on-frame, strip, and stitch-and-glue, tweaked and modified into the ultimate high performance Greenland-style boat.  Then again, "Your mileage may vary".  The next person who builds this replica will probably think it sucks. I may never get around to documenting exactly what changes I inadvertently made to the original design, or be able to reproduce them.  Then any secrets to the design will be lost forever. 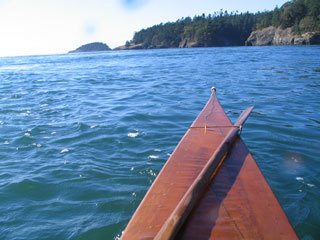 The NWOC group disperses.  Warren, Steve and Leslie play beneath the bridge under Deception Pass proper.  I do a few rolls to entertain the crowd standing on the deck of a whale watching boat that wandered in close.  A porpoise swims by.

Later on at Bowman Bay, Warren and I trade kayaks.  He says something like, "This is an awesome kayak!" and does assammik masikkut, a forward finishing hand roll.

I'd been practicing norsamik masikkut, the forward finishing roll with the norsaq and show Warren.

"Dude, it still looked like you were laying back on that one," he says.

"That looked perfect.  You weren't cheating that time."

As a rule I'll try not to brag about any new roll I've learned without sharing my tricks.  Like a lot of rolls, I thought I would never get norsamik kingukkut then all of a sudden I did.  If you capsize to port, set up twisted completely facing to starboard with the norsaq hooked on the port gunwale with your right arm.  The way I do it requires a STRONG capsize backward, keeping up the momentum of the capsize.  After capsizing bring your head and upper body up as much as possible alongside the gunwale.  Reach up OUT OF THE WATER with the norsaq along side the STERN and slap down hard.  Getting upright occurs EARLY in the roll, while your body is already in a layback position on the deck (capsized) and the center of gravity is low.  The sweep is more of a sweep downward, diving alongside the kayak rather than a sweep outward and forward.  As the kayak is turning upright your body twists right to left and tucks forward.  It is a twisting motion with the upper body and a continuous sweeping motion with the norsaq downward, inboard and underneath the kayak. 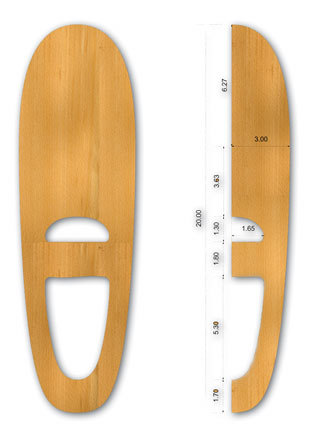 For practicing forward finishes Warren made what I would call a training norsaq, a flat paddle with a hand grip cut in the middle.  It's made out of 1/8 in plywood and fiberglassed on both sides.  While back in The Jewel, I try it out.  It requires a few contortions of your wrist to get the angle right, but it gives you more purchase on the water so you can concentrate on the proper torso motion for forward recovery.

Warren gets out and looks around the beach for some bricks.  He finds a couple rocks instead.  The park ranger sees him and asks him what he's doing with those rocks.  Imagine his reaction when Warren tells him we need them so we can roll our kayaks!  I pick up the smaller one and set in on my lap and paddle out.  It feels about the same weight as a brick.  For the first time I try ujaqqamik tigumisserlunii nerfallaallugu, rolling with a brick or stone starting forward and finishing aft.  After capsizing I bring the rock up to the water's surface before sweeping it back and down.  It's easy, really.  The next rock is about 50% bigger.  If you miss this one don't drop the rock in the water.  All you have to do to recover is switch it to the other hand and it will act as a counterweight so you can recover with a regular handroll.  Warren finishes with the rock in a forward recovery.  Bring on the bowling balls!