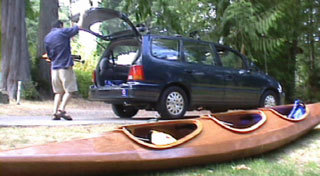 There are very few things that we really own in this lifetime.  It’s more like we rent and borrow.  I find myself always giving away old toys, clothes, furniture, home electronics, books, and selling off kayaks. If I haven’t used something in the past year, then I start questioning whether I really need it. A few days ago I finally sold our Pygmy Osprey Triple.  I had plans of taking the it out again with the kids in the San Juans for another summertime tour, camping on the outer islands and looking for whales.  After a lot of frustration trying to get them in it even for a little day trip at the neighborhood beach, I finally admitted to myself that they were not at all interested.  We don’t even own our kids -- they are definitely their own persons.  It’s hard to let go of the memories and dreams of what might have been.  Oh well, at least it went to a good family who I expect will get a lot of enjoyment out of it, instead of sitting forlorn in the driveway.  It was another successful Craigslist transaction by the way, sold in 18 days.  Unfortunately, I heard that they’ll start charging for that service in the near future. [PICS: captured frames from the video of the first time launching the triple] 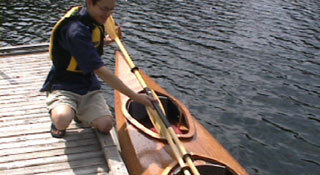 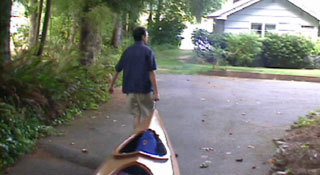 Getting rid of your stuff every once in a while helps to become less attached to material things and let go of the past.  That leads me to a discussion of the Sunk Cost Fallacy.  Sunk Cost is the cost that has been incurred that is irretrievable.  Economists say that since the sunk cost cannot be recovered it shouldn’t play a part in rational decision making.  Just as an example, let’s say I’ve invested a lot, both financially and emotionally, in preparing to take the kids on a long summer kayak tour.  But there are still a number of expenses that need to be taken care of, such as proper kayak outfitting and extra camping gear.  When it starts to become clear that they really don’t want to go, I have to make a choice between sinking more money into the hopeless project or giving it up entirely.  Economics proposes that the fact that I’ve already spent a lot of resources on the project should have nothing to do with my decision.  Realistically, humans do not behave in that rational manner.  Instead, after investing a lot into a project, they tend to be more optimistic that the project will succeed (known as the “overly optimistic probability bias”), and sometimes, just continue on in order to save face.  They also fall into the Sunk Cost Fallacy, continuing on in order not to “waste” the resources already spent on a failing project, even though doing so means sinking more money into a hole.  That was just one example -- maybe not the best one because I can and did recover some of my cost by selling stuff on Craigslist.  This flawed decision making occurs all the time, and partly is resposible for cost overruns in big government projects.  I bet you can think of some good examples.

hilarious, informative and typical all at the same time. good stuff.