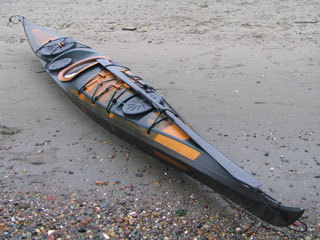 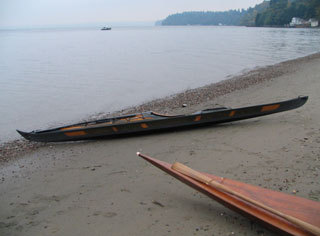 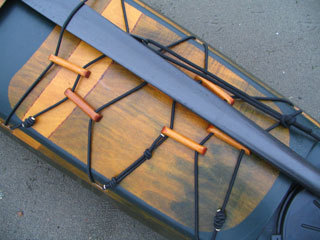 The other day Dick and I did an experiment with a kayak he has been keeping in storage for the past few years.  This is the Evolution#1, an 18ft long high volume fast expedition kayak constructed from plywood over a minimal internal frame.  It was made by "Blazing Aspen Kayaks" in Olympia, and I think the builder has moved on to other pursuits.  Although he named it Evolution#1 I'm not aware that there are any more of them and it may be a one off.  It weighs 45 lbs and used to be painted red, but now is green with some areas left bright finished.  Below the waterline the hull is coated with a very tough abrasion resistant black epoxy/silica/graphite mixture.  It has hard chines and is concave between the chines and the keelson (like the old Anas Acuta), so it simulates the shape of a skin-on-frame hull in the water. 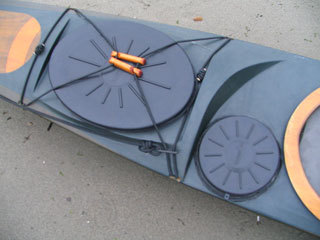 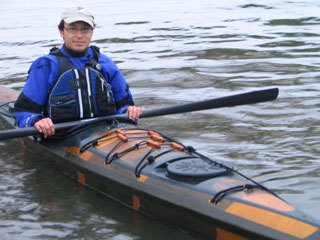 Dick brought the Evolution#1 to me to have a small hole in the rear bulkhead repaired (caused by forcing some gear into the aft compartment) and to test it out with some water ballast.  The reason he hasn't been using it is because it feels very tender empty.  If it still didn't feel stable after the ballast then he was prepared to put it up for sale on Craigslist. 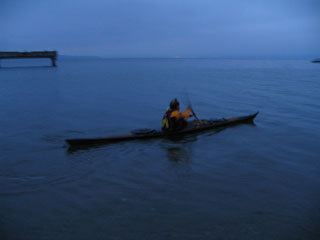 Dick got seven mylar bags free from his local Starbucks. When completely filled with water each bag weighs 12 lbs.  They are difficult to fill completely, even with a hose, so the total added weight was probably around 70-80 pounds.  Success! They made an incredible difference in stability.  It still didn't turn very well but we both felt like we could have paddled it all day.

I know that boat, in fact I've paddled it several times. This Evolution was the first of very few made, and I believe only two of the 18' version were made. Evolution #2 was a 17'4" version and unfinished when I built my 16'6" version, Evolution #3. Blazing Aspen Kayaks built custom kayaks and also offered one-on-one kayak classes. Evolution #3 was the first kayak with a small dry bag lined hatch on the front deck, between the paddlers legs. Evolution #4 was also a 16'6" version and the first one with a rudder, built for my wife. Blazing Aspen Kayaks also built an Aleutian style boat called the Murrelet. Evolution #5, which I think was the second 18' was unfortunately destroyed, along with a Murrelet when they flew off a car rooftop on a highway. I'm not sure if there were any other Evolutions built. Most of their boats were Murrelets and another (nameless) Greenland style 16' boat that had a similar hull to the Evolution but completely different deck lines.

I built that boat and it was the third evolution Greenland style. Paddled it around Vancouver island. Was a challenging boat fully loaded for sure with no rudder. But was fast and handled seriously rough seas.