The Little Baidarka That Could 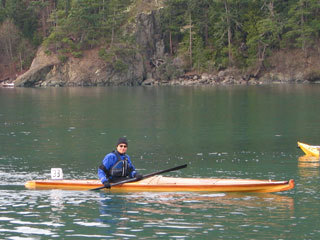 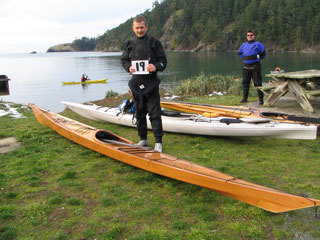 I entered my first kayak race Sunday, the first annual Deception Pass Dash, courtesy of Seattle Raft and Kayak.  It’s good to have an event in December to look forward to, other than floating around the Lake Union houseboats singing Christmas carols at night (although I must admit it was pretty fun the last time I did that).

Hey, wait a minute!  "I didn’t know we were going around Strawberry Island!" I say.

“Yeah”, someone says to me.  “Five nautical miles total.  We should be back here in an hour.”

I get a sinking feeling.  I’ve never been around Strawberry Island.

I unload Moonlight Dancer from the car.

“Are you racing in that?”

A bunch of racers have carried their surfskis to the beach and are already on the water.  Warren is there with his Arctic Hawk SS.  “Whoa!  Did you see that?" he says.  "Those guys are FAST!”

I suit up.  I’m going to get hot, I think.  I put on my drysuit, sprayskirt, PFD, hat and glasses.  I walk around but I’m still cold.  I decide I better put on more fleece.  I take everything off again. 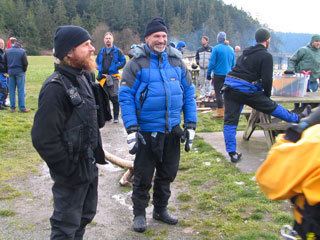 I get on the water to warm up.  I see Henry Romer in his Anas Acuta.

“Why didn’t you bring your skin-on-frame, Henry?”  I ask.  “The other day when you had it I couldn’t keep up with you.”

“There’s always a possibility it could get hairy out there,” he says. 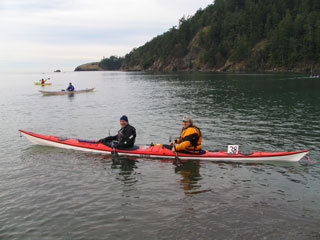 “Hey, guys, what kind of paddles are those?”  someone asks.

One long whistle blast.  Water splashes.  A mad rush of adrenaline.  Quick – draft behind the double! The wake pushes me sideways.  Don’t slow down just keep going! I edge to track straight, just inches from kayaks on either side of me.  I can’t imagine keeping up this pace for 5 miles.  Just keep it up until the island…

Earlier Warren asked me what my strategy was going to be.  Strategy?  How about go as fast as you can?

We make it through the kelp beds and around Deception Island.  The Pass comes into view.  Now I feel a headwind.  Someone has paddled way off to the south, maybe trying to get in the lee of the land, or make use of the remnants of the flood current.  It looks slack to me.  Warren is way ahead, off to the north.  What is he doing?  He must know something – this is his backyard.

After two miles I’m warmed up and feel like I’ve hit my cruising speed.  Someone in a Mariner Express HV inches up behind me.

He passes me.  It doesn’t look like he’s working hard at all.  I try to draft behind him as long as I can.  Occasionally he glances back.  He speeds up.  I think he’s trying to shake me.  Eventually I fall behind.

In this race the slower you go, the slower you go.  As you make your way into the Pass, the ebb continues to build, slowing you down and pushing you further behind.  As I reach Pass Island I can feel it, some gentle swirling and boiling.  I dig in and step up my cadence, following the Mariner through the kelp.  Just before Strawberry Island the current grows stronger.  I just need to make it around Strawberry -- it’s all downhill from there.  Reach forward high angle dig in bury the blade plant your foot torso rotation punch the deck belly crunch.  My right leg has gone numb.

Racing is all psychological, I tell myself -- the part that isn’t all conditioning, that is.  It’s ignoring the pain, heat, and paresthesias.  Will the next stroke kill you?   If not then you can keep going, barring major tissue injury.

I'm over the hump and heading back through the Pass, getting a little help from the building ebb.  I’m at Deception Island again.  The last leg.

Someone in a Wilderness Tempest 170 passes me.  "Nice kayak," he says.

Somehow those guys with Euroblades all look like they are on a lazy Sunday afternoon paddle, just one slow stroke after another.  Where is their speed coming from? 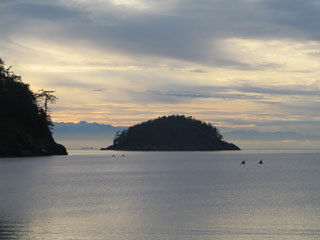 The finish line approaches.  I can make out a small crowd on the dock.  I glance over my shoulder.  A kayak closes in on me.  Not again!  The feeling has come back to my leg.  I sprint.  I am not going to let anyone else pass me!  I hear scattered clapping from the dock.  Did I finish?  I keep paddling just to make sure.  Then I stop and glide…

I collapse into a balance brace and close my eyes.  I’m floating weightless.  The cold soaks through my knit cap, into my scalp, into my head.  The wake from a passing kayak moves through me.  I rest on a giant waterbed and can’t help breaking into a big smile.

[See the results of the Deception Pass Dash here]

Good speed, Andrew. You are good.
By the way, it seems that Dubside and Tom Sharp will travel to Spain in late March 2007 for a Symposium.

Thanks, Wenley. Yes, I heard also Greg Stamer and Freya might be there as well. Will you be atending?

Yes, Magiliaq and her girlfriend will attend as well.
As for me, I have booked a week in the Symposium for a course with the Salzwasser Union paddlers. They have a look-alike, Bcu 4* award.
You know, modern stuff. :)

Does every little country in Europe have to have their own sea kayak awards? You would think the BCU alone would be good enough for the EU, or the whole world for that matter! ;-)

Great description of the race. Sounds like a fun time. Hopefully I'll have similar stories to tell one of these days as I'm hoping to try some non-whitewater racing next season as well.

A little update: I measured the distance on the chart and it actually comes out to about 5.75 nm. Others claim to have measured it at 5.5 nm but gotten 6 nm on GPS so it's a little longer than we thought, which means our overall speeds are better!

I can hear the signature "Beep, beep" of the Road Runner, Andrew.
Guess what? John Petersen is considering to join. I hope the organizers realize how good this man is and pay for his flight expenses.

Cool. I want to go carolling by houseboats in Lake Union.

Wish I'd thought to do that when I was still on the Hudson and we could've paddled up to the 79th st. boat basin, which is mostly houseboats although the city's trying to get the liveaboards out through attrition, the oldtimers are grandfathered in but newcomers don't have that option. Haven't seen many houseboats in the Paerdegat (although there is one really festive motorboat there, I couldn't resist taking a picture on Saturday).

The cool thing about Christmas caroloing on Lake Union is that the residents hand out cookies and mulled wine!