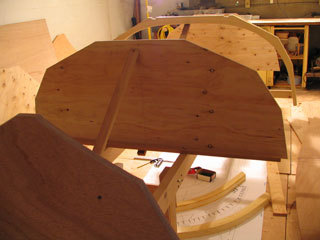 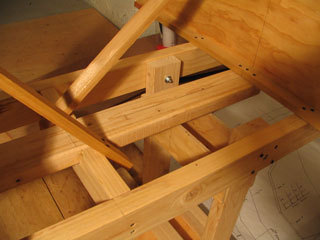 Don't you hate it when it seems like everything you own starts breaking down at once?  I feel like I'm constantly fighting rot, corrosion, wear-and-tear, senescence.  The replacement Uniden Voyager VHF radio I received as a free replacement for the last Voyager that broke while under warranty won't work anymore after I got it wet.  I think it's a battery problem.  Those buttons on my camera still don't work. I really should get the leaky socks replaced on my drysuit.  The latex cuffs are starting to look pretty ratty too.  My hybrid car is broken. Something is draining the battery overnight so I need to jump start it every morning.  This has been a problem on and off over the last six months.  So far no one can figure out what's wrong, even after changing the starter battery and what they told me was a faulty relay.  But I'm absolutely sure it all started when they installed the latest software update!  I think I'll start looking for something I can run on biodiesel.

I haven't had a lot to post lately but I thought I'd at least show what little progress I've made on my Joel White Pooduck Skiff.  I think all of last week I was either busy with work, trying to get my taxes prepared, or just rolling around out at the beach without actually going anywhere.  The weather has usually been rotten anyway.  Nothing interesting to say about rolling either, except that I've started practicing while wearing a PFD.  Every once in a while someone will ask on the forum if wearing a PFD makes it easier or harder to roll.  I've decided that it makes forward recovery norsaq rolls easier, and even layback rolls easier as long as the thickness of the PFD doesn't impair your layback.

I thought I would at least have the backbone of the boat finished by the end of the month.  I'm not quite there, but I still have a few more days.  Now that the strongback is up, there is so little room that I'm crawling on my hands and knees to use the floor space under the strongback while working with the plans and patterns.

1)  View of the strongback from the stern, with forms and midship frame installed.  The midship frame is sanded down smooth, since it will be more difficult to sand down once it is epoxied onto the planks.

3)  Transom.  The edges are beveled at different angles to join with the planks.

4)  Nail heads used to mark the edges of the inner stem on the laminated inner stem blank.

5)  The laminated outer stem, carved to fit the full-size pattern. 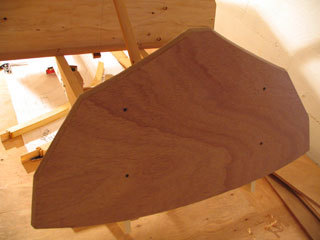 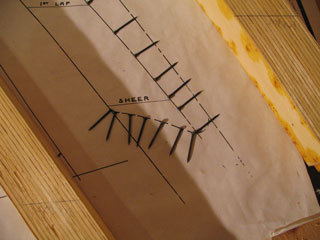 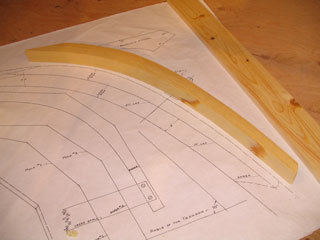