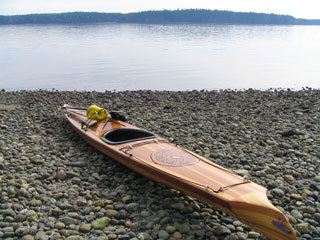 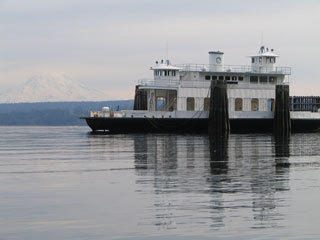 Well, getting back to the Islands of Puget Sound Series…

Today I circumnavigated Anderson Island.  The wind was calm.  The water was like a mirror.   The sun came out briefly.  I even put on some sunscreen!

The only notable thing about Anderson Island I can think to mention is that there are no public beaches.  Pretty lame, huh?  Also, I think I saw the MV Steilacoom, the 71-year old ferry that the State recently sold on eBay for $49,500 to a guy in Las Vegas!  Apparently, he was the only bidder.  It's pretty amazing what deals you can find when shopping for old boats.  The ferry looked like it was in good shape too.

I really didn’t feel like paddling at all today.  I guess I was feeling lazy.  Sometime though the best antidote for that is to just get out there and do it.  Being outside, feeling the sun on your face and smelling the salty air can do wonders.  Just in case I got bored though I brought my iPod and stuck it inside my drysuit, and ran the ear buds out of the neck gasket.  It’s the first time I’ve done that before.  I don’t have a waterproof case for the iPod or marine ear buds, but there was no way I was going to capsize unintentionally today anyway. 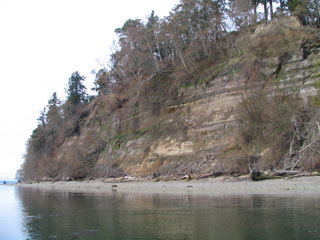 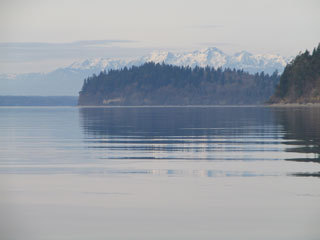 I guess I used to find something offensive about bringing an iPod kayaking.  I have to say that it definitely adds another layer of dissociation between oneself and the environment.  For instance, there is less feedback from the noise of the paddle.  I used to not like to even wear gloves when I paddled because I couldn’t feel the paddle as well.  With the combination of gloves and an iPod I felt like I wasn’t all there -- I might as well have been watching myself while sitting at home at my computer!

How did we get this far?  I remember sitting in on a particular slide show at the West Coast Sea Kayak Symposium that featured a husband and wife team who talked about the sea kayak expeditions they took around BC and Alaska during the Seventies.  Of course, there wasn’t the variety of quality kayaking gear back then that they have today, so they were putting camping gear in plastic garbage bags and drying their own food (does anyone dry their own food anymore?).  What did they wear back then?  I think rubber bib waders and wool sweaters.  The point of their talk was that people have been sea kayaking for years without all the high-end gear or training available to them now, and that no one should be discouraged from getting out there if they don’t have all this stuff.  This guy even admitted that after over two decades of sea kayaking, he still didn’t know how to roll (this was followed by a collective gasp from the audience)!  Was the focus different back then?  Was it more about connecting with Nature and escaping a media-filled consumption-driven technological life for something more simple?  I don’t know – that was before my time and just about everything I know about it comes from reading The Starship and the Canoe! I am reminded of that iconic image of George Dyson in his skin-on-frame baidarka, exploring the Inside Passage of British Columbia, playing a flute made out of the same aluminum tubing his kayak was made out of.  I get the impression  that sea kayaking now is more gear- and performance-oriented and has started to cater to adrenaline junkies.  Of course, better equipment design and training have resulted in vast improvements in comfort and safety.  But I’m also sure that, given my GoreTex® drysuit, carbon fiber paddle, silver embedded Xstatic® socks, and iPod®, the media-filled consumption-driven technological lifestyle has won.

You are right; we are all spoilt silly with the gear choices we have just to go outdoors, with the activities itself essentially free. I have to admit it gives me pleasure to go shopping online for high-tech gear and to use them though. Looks like consumerism really sold itself to us...