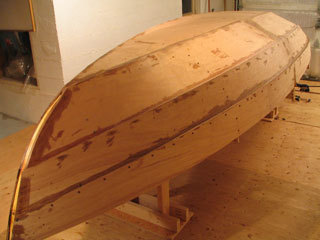 Just a warning: it might look nearly finished but there is still a lot of work to do.  Even before I can turn her over to start building the interior I have to install the outer stem, take out the temporary screws, fill all the little holes, and sand the exterior.  Once the interior is completed (gunwales, breasthook, quarterknees, thwarts, maststep, air chambers, floorboards, and centerboard trunk) I have to turn her over again to install the keel/skeg.  Then there's the rudder, tiller, centerboard, hardware, painting/varnishing, spars and rigging... Come to think of it, I've probably just begun! 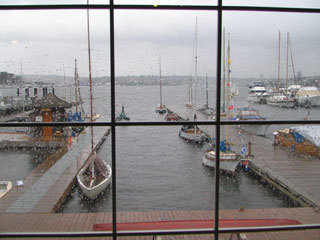 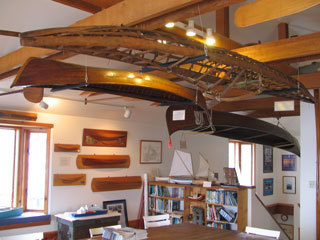 This was going to be a my sailing week but unfortunately the weather has been nasty and I have no crew.  I went down to the Center for Wooden Boats to get "checked out" on their sailboats.  When I got there the wind had picked up, it started to hail, and they closed the livery.  Apparently they close it at around 12 knots -- no big deal in a kayak, but I guess those little boats are only good between Force 2 and 3!

I ended up spending the afternoon lazily browsing through old issues of Wooden Boat magazine in the CWB library.  I finally found the issue with Brian Schulz's cover article about cruising the Sea of Cortez for two weeks in a 18 ft skin-on-frame version of the Joel White Shearwater with a lug rig.  Amazing!