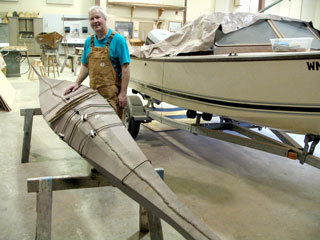 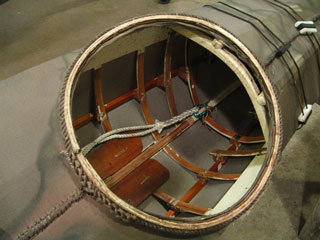 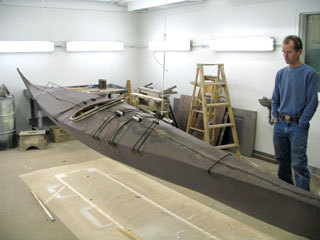 I made a visit to see Ricardo's Greenland kayak in progress at the Bates Boatbuilding program.  He took the lines from one of the drawings in Harvey Golden's book, increased the beam a little and raised the masik for a comfortable fit.  He had just finished dyeing the nylon and was waiting for it to dry so he could apply the polyurethane.  When I first saw the kayak my first impression was that it already looked like a museum piece, a little rough around the edges. The rope cockpit rim really makes it look authentic, and he managed to get a deep brown color using multiple coats of dye.  I gave him a hand suspending it from the ceiling in the painting room to prepare it for spraying on the two-part polyurethane.  Isn't he lucky to have all this space and specialized equipment at his disposal?  Well he was, anyway, until the college authorities found out that he had already built several boats under the radar while being a "volunteer" and not paying any tuition!  I think that is why he's anxious to get this kayak done and out of there.  Congrats Ricardo!

Posted at 09:44 PM in The Art of Greenland Style Sea Kayaking | Permalink | Comments (1) 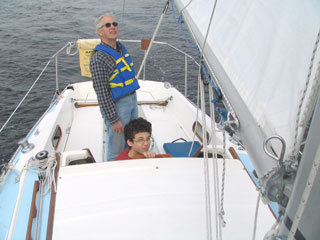 Whoa!  My readership has really fallen off since I started writing about sailboats -- don't think I haven't noticed!  I bet there are a bunch of people out there who miss the regular posts about wooden kayak building, trips around Puget Sound, occasional BCU training and the Dubside Watch.  "What's all this sailing crap?" they're probably thinking.  Well don't worry -- I'll get back into the kayaking scene eventually.  For one thing, the Puget Sound Kayak Symposium is coming up next month, SSTIKS 2007 is coming up in June, and I hear Dubside is back from Spain.  Registration for SSTIKS is open, by the way, so reserve your spot before it's too late.  Space is limited. 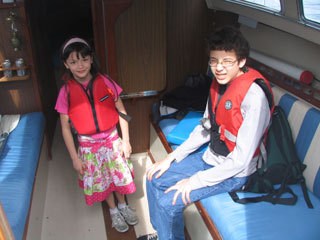 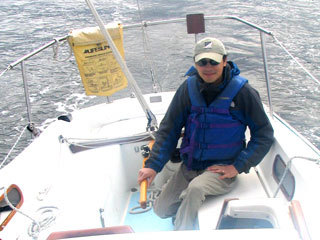 Today I took the kids out on a Saturday surprise sail around Commencement Bay with Ricardo on one of the Sailing Club boats.  I say it was a surprise because if I had told them what we were going to do beforehand I would never have gotten them in the car.  They got on the boat reluctantly, of course, but cheered up a little after we threw them a bag of Cheetos and some cream soda.  We ended up sailing across the bay and docking at the Ram Brewery for beer, onion rings and ice cream.  It was good to have an experienced sailor like Ricardo along -- I could still use a lot of practice docking under sail.

By the way Ricardo just finished skinning his Greenland kayak at the Bates Boatbuilding Program.  He took the lines from one of the kayaks in Harvey Golden's book, of course. 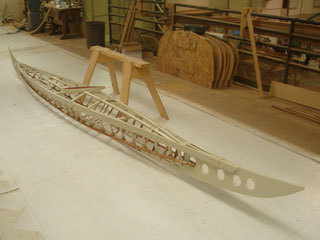 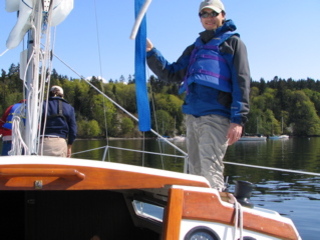 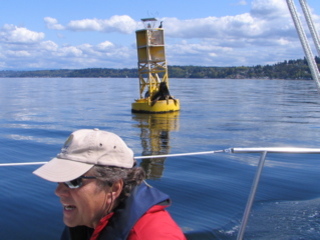 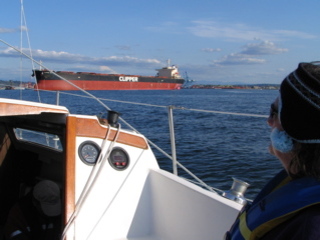 Couldn't have asked for better weekend to take my basic coastal cruising class: windy, dry and sunny.  The wind was blowing at 15-20 knots Saturday so conditions on Commencement Bay were perfect to practice reefing.  With sailboats all over the Bay our instructor was able to show us plenty of examples what not to do: "See that guy over there?  Didn't I tell you the worst combination in these conditions is a full mainsail and no jib?  He's heeled way over and is probably fighting an extreme weather helm!"  Mike Rice, owner of Puget Sound Sailing Institute, has sailed over 85,000 nautical miles and crossed the Pacific Ocean seven times.  He's also an excellent instructor.  The pictures are from today after the wind had died down quite a bit.  It gave us a chance to work on navigation and anchoring. 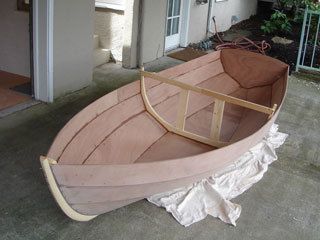 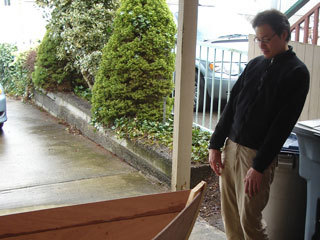 Ricardo took a break from building his skin-on-frame Greenland kayak at the Bates Boatbuilding program to help me roll over the Pooduck Skiff.  I had finished sanding her down with 220 grit just this morning.  The exterior is probably smooth enough for paint, but that will have to wait until all the interior work is done and we flip her upside down again.  So far she feels pretty lightweight and came off the forms easily.  That's me agonizing about how far off-center the stem is.  Thanks to Ricardo for the pix.

Filling the holes and the outer stem 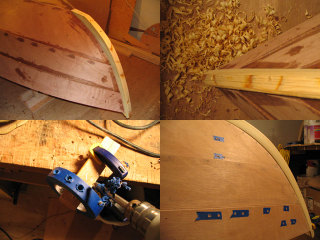 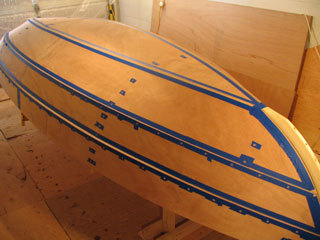 Remember the "outer stem" I had laminated out of yellow cedar and carved to fit the full size pattern quite a while ago?  Well, after the boat was planked I installed it using thickened epoxy and silicon bronze screws, counterbored and bunged with pieces of hardwood dowel.  Since I had some thickened epoxy mixed up, it was also a good time to fill in all the holes left by the drywall screws that had temporarily clamped the planks together and held the planks against the forms.  The spaces between the laps also needed to be filled with thickened epoxy.  To keep the epoxy mess (and the subsequent sanding) to a minimum, I masked everything off with blue painter's tape.  One trick I learned was to mask around the screw holes with a roll of tape that had holes drilled through it. 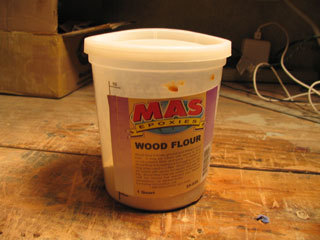 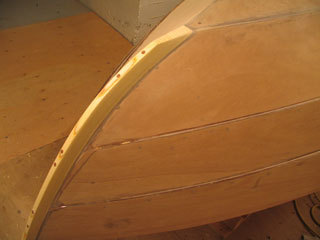 It really took a lot of thickened epoxy to fill between the laps.  In the middle of the day I ran out of the "wood flour" (the fine sanding dust that was the by product of my previous projects) that I was using to thicken the epoxy.  So I dropped everything and ran to my local Boater's World to get some more wood flour.  They charged me $9 for a container of MAS brand wood flour!   Oh well.  Of course, after the epoxy had cured and I started sanding I ended up making more flour than I would ever need.   I felt like I was making money!

Just a little bit more sanding to go then she'll be ready to "roll over"! 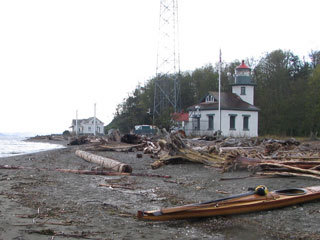 Maury is the land mass I see every day as I look across East Passage.  Quite a few years ago, I think not long after we bought our house, a company that owned an old gravel pit on Maury wanted to reactivate and expand it to produce gravel for the Third Runway at SeaTac Airport.  It would have meant excavating 10% of the entire island and transporting the gravel north by barge.  We would have probably seen and heard the pit operating 24 hours a day.  Studies subsequently demonstrated that the soil on Maury and Vashon Island is heavily contaminated with arsenic, from the old ASARCO smelter that spewed it north from Tacoma.  That meant that, in addition to the inevitable destruction of the precious local eelgrass habitat, there was a risk that digging into the water table would contaminate the aquifer.  Residents of Maury and Vashon were able to organize a strong grassroots opposition to the gravel pit.  I think right now the plan still locked up in the courts. 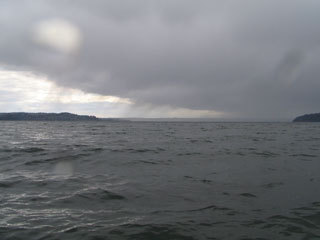 Maury is called an island but it is actually connected to Vashon Island by a small isthmus, aptly called "Portage".  A popular route is to put in and take out at Portage.  I put in at low tide at the Quartermaster Harbor side, carrying my kayak 300 yards across a mud flat littered with driftwood and debris, then slogged my way south against the wind.  It was a wet, ugly day.  Finally, I rounded the southern end of Maury and headed north.  I was able to catch a couple good rides on the small windwaves.  Then I saw a front approaching.  It came with a strong gust of wind and passed quickly.  The sky cleared.  I ate a late lunch at the Point Robinson Lightstation.  The most interesting thing I saw today was a curious  collection of old exercise bikes along the side of the road at Portage, positioned to face the water.  What could it mean?