There is nothing that gets me more inspired to get back to building than seeing a bunch of little boats up close, feeling the wood and smelling the varnish.  So I got back to work and made the "breasthook", the wooden plate at the bow that attaches to the inner stem.  This is a key component, because it can be difficult to fit, and is prominently displayed at the bow where you will see it everytime you take the boat out, and where everyone can inspect it up close.  So there was no small amount of sitting around visualizing, sketching and planning how I was going to make it.  Instead of following the plans for the Pooduck I used the technique described in the book How to Build Glued-Lapstrake Wooden Boats by John Brooks and Ruth Ann Hill.  It is a bit more complex than the technique described for the Pooduck, but results in a stronger breasthook. 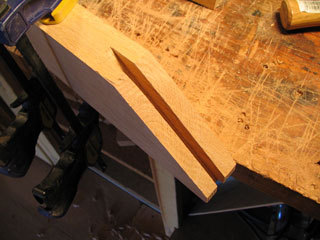 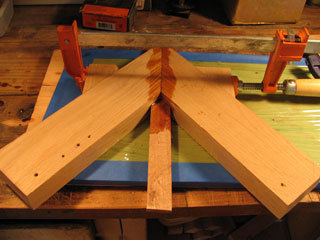 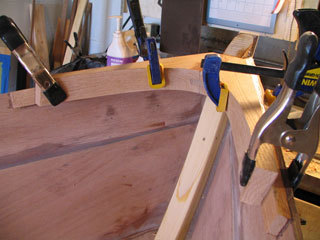 The pieces were joined together with a spline (mahogany), so a groove was cut out in the blanks, with some creative use of the tablesaw.

The blanks and spline were glued together with epoxy and clamped tightly.

After positioning the blank on the bow I traced out the final shape.  I brought it to the Bates Boatbuilding Program and used one of their many bandsaws to cut out the shape, with the help of Ricardo. I've never used a bandsaw before! Oh the boats I could build with all the cool tools they have there!

After a little planing around the edges to get a good fit, the breasthook fell nicely into place and was secured with silicon bronze screws and epoxy.  Once the epoxy is fully cured I'll plane it down so that there is a little camber at the top and it joins up smoothly with the sheerstrake.