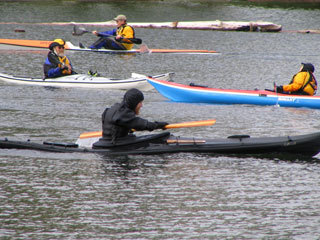 The Whatcom Association of Kayak Enthusiasts (WAKE) held their annual Demo Day in Bellingham yesterday.  My friend Dick Mahler talked me into coming along with him, instead of paddling around Lake Union for the Opening Day of boating season at the Seattle Yacht Club.  He wanted to sell some of his old gear and also his unique green wooden kayak Evolution#1 at their swap meet. 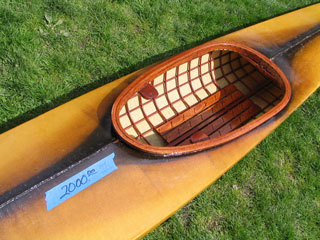 There were quite a number of kayaks for sale, including a couple of meticulously crafted skin-on frame baidarkas and a skin-on-frame Greenland boat by the same builder.  The skins were cotton canvas coated with linseed oil. I had an interesting conversation with one of the owners of a kayak outfitting/guide company who was lamenting the pressure to give big discounts on slightly used and even new kayaks.  Apparently people have learned to wait to go to a kayak symposium to buy their kayaks and gear, because they know they can pressure dealers to sell them at a discount.  In fact, they’ll even wait to get all of their on-water kayak instruction at an annual symposium.  In addition, symposia have really expanded here in recent years, so small outfitting/guide/instructor operations are feeling pinched between attending all the events and operating their own business. 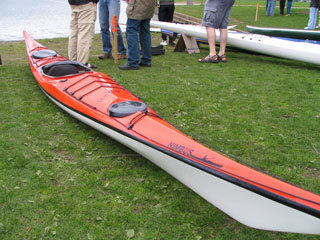 Once in a while I’ll flirt with the idea of buying a “real” boat – you know, a long, fast fiberglass monster I can pack a barbeque grill in for that big expedition, but I keep gravitating to the low volume boats.  The one that caught my eye yesterday was the Ice Kap built and designed by fiberglass guru Sterling Donalson.  It was designed to compete directly with the NDK Romany.  It’s just under 17 ft LOA, has a 20 1/4 in beam, and weighs 38 pounds.  It’s highly maneuverable.  I thought the cockpit opening was big, even for a keyhole cockpit.

According to Donalson, the British manufacturers have some excellent designs and safety features, but their construction process is stuck in the 1970s.  Specifically, their use of fiberglass mat rather than cloth soaks up lots of resin, resulting in a heavy, brittle layup.  Their use of hand layups also results in manufacturing inconsistencies.  In contrast, Sterling Kayaks uses all cloth and a “resin infusion” technique, where a vacuum is created in a closed mold and the resin is then injected into the mold.  This results in a precise resin to fiber ratio, a stronger and more flexible hull, and reliable, consistent construction with finished boats weighing within a pound of each other.  He offers to demonstrate with a 6 pound sledgehammer on any part of the boat.

A while ago Brian Rhody commented on this blog that Dubside used to be a one-man reggae band in Philly.  Yesterday I was able to get confirmation from Dubside himself: he built a custom electric guitar with three base strings and three guitar strings and controls for a drum machine.  In fact he is having it taken out of storage and shipped from Philly.  Back in his previous life he would play in the corners of small clubs and at frat parties.  He could play for three hours without a break, but according to him the act would get old after about ten minutes.  Those frat guys were too drunk to care anyway. Pleasure meeting you and Dubside at the Demo Day. You guys inspired me to practice rolling more so my day today was consumed with rolling practice. I have some photos of you rolling if you want them drop me a line. Roll on.

Hi Rodger -- good to hear from you. Just a reminder for you and anyone else who might be interested: Dubside regularly hosts rolling sessions and gives individual rolling lessons at the Lake Stevens High School pool. Email Tom Sharp at tom@dubside.net for the schedule.

I'd love to have some of those pics if you can email them to me. Thanks!