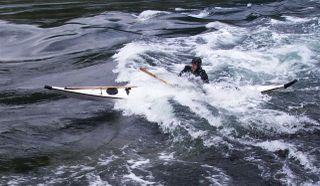 Warren sent me this pic of him playing at the Skookumchuck tidal race. I'd like to give credit to whomever took the pic. More photos from Warren's trip with the SKSB-NW group can be found at Larry Knell's album here.

Warren did ask me if I was going on that trip to BC with them but I declined.  In fact, I thought he was crazy -- no way my skills are at that level!  In fact, I haven't even been at Deception Pass for quite a while.  I've been suffering from quite a bit of "been there, done that" feeling about the Pass that keeps me from making the two-hour drive.  With the beautiful summer days coming up though I think I'll make it a priority to spend more time up there.

ADDENDUM: That photo was taken by Rob Gibbert. You can see more of his Skooks pics at the SKSB-NW group here (requires login):