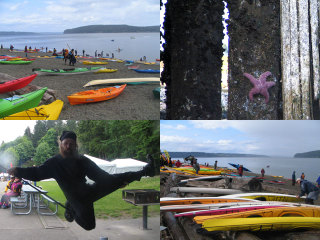 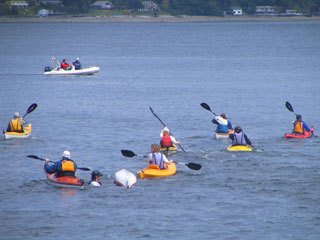 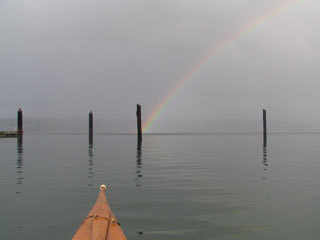 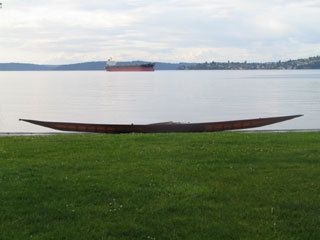 Other than wandering through the vendor booths, showing off my kayak, and chatting with random friends that I run into, I don't do much at kayak symposiums.  This year I paddled to the Puget Sound Kayak Symposium from Thea's Park at the entrace to Thea Foss Waterway.  Despite the rain and a little breeze it was a pleasant trip along the Tacoma waterfront.  It was a good way to avoid fighting for parking at the Symposium which is usually pretty limited.

When I arrived at the beach they were in the middle of holding a series of races, with divisions ranging from "beginner" to "advanced".  Contestants would run down to the water, jump in their kayaks, paddle around a not-to-distant buoy and an anchored boat and back.  They were knocking paddles together trying to get off the beach and a couple even knocked each other over, unintentionally, I think.  But what a great idea for a race that would be, to have "no holds barred"!  It would certainly be much more interesting than the typical race where only the most seasoned paddlers with surfskis bother to enter.

My friend Rey showed up to try out some boats.  He had been kayaking a few times before and he and his wife were interested in buying a kayak.  We went over to the Impex tent and checked out the Currituck and  Montauk and Force 3.  I really liked the Montauk, which is highly maneuverable and a good size for me.  In comparison I thought the tracking on the Force 3 was stiff, and when I rolled it I fell back over on the other side!  Based on that experience alone I would avoid that boat completely.  Rey fell over and went for a swim, after trying some low braces that I had taught him.  He was only wearing a thin shorty wetsuit, and described the water as "shockingly cold."  The support boat came and picked up him up and that was the end of this kayak experience for the day, hopefully not forever!  I should keep away from instructing -- I just end up doing more harm than good!