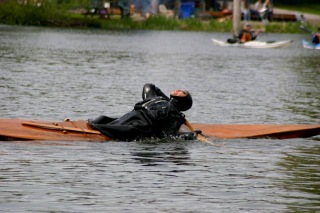 More about the WAKE Demo Day:  Of course Dubside gave a rolling demo, but this time they had a “Roll Off” where anyone who wanted to could participate alongside Dubside and do as many of the Greenland Rolls as they could.  Honestly when I showed up I didn’t know anything about it but I happened to have my tuilik and joined in.  Turned out that only the really serious rollers participated, I mean, everyone there who had a tuilik.

Dubside performed some new rolls I’ve never seen or heard of before, such as:

So, as you might expect, for most of the show we participants were left watching as Dubside continued on and on for well over 50 different rolls both sides.  Apparently he and Maligiaq had worked on the new rolls in Spain together.  Maligiaq even attributed Greenlandic names to them.  One of the rolls I think Maligiaq came up with was sculling on the foredeck while tucked forward with arms crossed.  Dubside is still working on that one.

Thanks to Rodger for the pics!