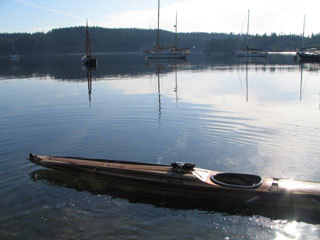 Every once in a while when business is slow I'll get a random day off from work. It just felt wrong not showing up, especially on such a beautiful summer day after already being off for a week of vacation. Just to be sure I really wasn't needed I work up early anyway and checked in.  When I received the  "all clear", I picked up a coffee from Starbucks and immediately left for the Peninsula.  Of course, I had packed my gear and strapped the  kayak on the car top the night before.  I felt so guilty that I decided to punish myself by circumnavigating the Indian/Marrowstone Island complex.

Randel Washburne wrote about the Indian Island circumnavigation in his book Kayaking Puget Sound, the San Juans, and Gulf Islands.  Marrowstone and Indian Island are connected by a little isthmus, so the circumnavigation of either island alone requires portage over some muddy tidelands and a highway.  I've done that before and it wasn't very pleasant. Indian Island is occupied by the Naval Undersea Warfare Engineering Station and landings are strictly prohibited, so its circumnavigation can be an uncomfortable trip.  In contrast, Marrowstone has plenty of public places to stop.  By the way, Capt. George Vancouver named Marrowstone Point in 1792 after the whitish cliffs behind it made of what he called "marrowstone."

I put in at the public boat launch at Port Hadlock across from Ajax Cafe and next to the Northwest School for Wooden Boatbuilding.  I planned my launch to coincide with slack and paddled clockwise around the islands.  I caught the flood current around Marrowstone Point.  Even though it was still an hour before the maximum flood I got a good boost: first 5, then 6, then an unbeliveable 7.5 knots around the point!  There was a very impressive tidal rip consisting of a row of standing waves extending out from the point a long way into the channel.  All my speed was lost as soon as I passed through that rip.  Check out the picture of Marrowstone Point I took after my trip (last picture). Even 4 hours later at slack, the rip is still there (the dark line extending from the point).  Unfortunately, you can't see all the whitecaps and turbulence in the picture.  Maximum current at the point today was predicted at 3.2 knots.  I'll have to come back some day during a strong flood just to play in it.  There is convenient beach access at Fort Flagler right at the point.

I continued on and stopped at East Beach County Park, and then Indian Island County Park before waiting a little for the current to slow down before paddling through narrow Port Townsend Canal and back to Port Hadlock.  Total distance was about 17 nm. 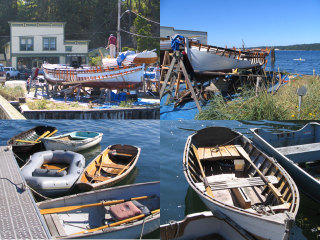 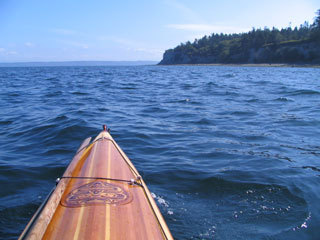 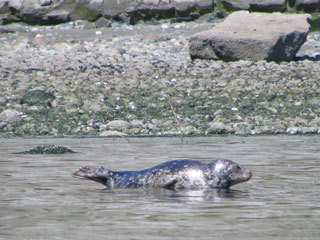 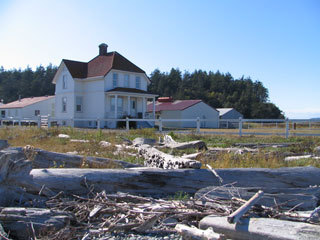 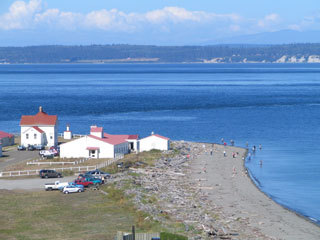