I just got back from another fantastic time at the 2007 West Coast Sea Kayak Symposium in Port Townsend, with a couple things to share:

Dubside unveiled his new shiny black kayak, a custom Ice Kap designed and built by fiberglass guru Sterling Donalson. Using a resin-infusion technique, Donalson is able to precisely control the resin/glass ratio, producing a ultralight, flexible and incredibly strong layup. Dubside's Ice Kap weighs 32 pounds. Donalson says that by omitting the day hatch and day compartment, he can get the weight down to 28 pounds.

Ten year old McKinley Rodriguez starred in the Greenland Rolling Demo. Here is a short clip of her performing the bowling ball roll -- for the first time. She looks like she is having way too much fun! Congratulations on a great performance, McKinley!

That's it for now -- hopefully I'll get a chance to upload more videos of the Symposium later! 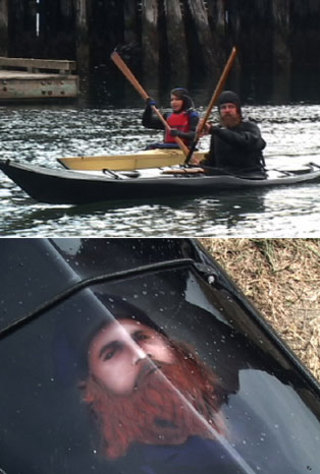 It is so cool to see a kid having fun outside instead of being lazy indoors. She obviously is having a blast. I wish I was half as good as her in my kayak.

McKinley is not only very talented but also fortunate to have parents who know how to nurture her interest in kayaking. Her father Marcel gave the presentation on Kayaking with Families at the Symposium and also developed the highly successful Kids Program at SSTIKS. I left his presentation with the impression that it's not just about being a good instructor for kids, but also about being a good parent in general.