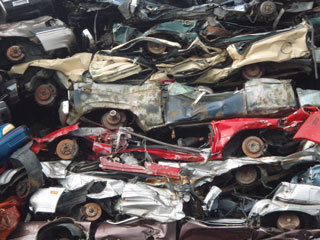 I have an old minivan that’s making strange clicking noises.  It also leaks oil and there is a big dent in the driver side door.  But I’m really not interested in shopping for a new van right now.  Does it even make sense to buy a new car now that we are beginning a long slide down the terminal slope of the global oil production curve, soon to be hurtling toward the collapse of Western Industrial Civilization as we know it?

Have you ever stopped to think about what awesome stuff gasoline is?  Next time you get the chance, pour some into a glass jar and admire the pale pink-gold color.  Swirl it around and take a little sniff (I loved the smell of gasoline when I was a kid).  Then pour it over a pile of wood and throw a match on it (stand way back).  The other day I did that and WOW -- it just burst into a huge, hot fireball!  Nothing comes closer to purified, concentrated liquid energy.  Take some time to bask in the warmth of that flame, because one day gasoline will be gone forever.

My pressure washer sat unused in a storage shed for the past couple years before I got around to replacing the hose the other day and filling it up with some new gas.  After a few pulls on the starter cord it started right up.  YESSSS!  I spent a big part of the afternoon blasting away the slimy buildup and the oil stains on our driveway (from that old leaky minivan), washing it straight into Puget Sound.  (Isn’t that typical of our suburban lifestyle, that we squander the two important resources that are becoming scarce in the world, gasoline and fresh water, for something like washing off a driveway?)  It didn’t take much gas to clean the whole thing -- plus a deck, patio and wooden bench -- less than a gallon.  Did you know that the energy in a gallon of gasoline is equivalent to 25,000 hours of human labor?  Just imagine, for instance, how long it would take to do that job with a brush.  At only $3.60 a gallon that’s really an incredible bargain when you really stop and think about it.  When all the oil runs out and everyone is riding bikes to work we’ll all realize what a bargain it has been for so very long!  For now I’ll keep living in my gasoline-fueled dreamland and powerwash my driveway clean.  When the collapse does come and the financial markets crash, and war, famine and plague start ravaging the world (I think it’s already begun), I’ll probably end up tearing out my cherished driveway for room to plant vegetables.

I bought a hybrid car in 2002, you know, before it was cool.  Gas was only $1.55 a gallon back then and those guys driving Hummers and Ford Excursions snickered at my funny car.  Well who’s laughing now, dumbass?  You don't see very many Hummers on the road anymore, huh?  You probably couldn't pay people to take one off your hands!

To celebrate of Earth Day this year I’m mailing in my order for a Tango Electric Car.  I’m clinging to that glimmer of hope that in the not-too-distant future electricity will still be cheap and abundant (yeah, right) and I’ll be the first on my block have a plug-in car!  I may even figure out how to put a kayak on top.  Don’t expect pics of it any time soon though because production is still dependent on getting enough investors involved to fund it.  Plus they have to overcome the underhanded dealings of the Big Oil/Automobile Industry Conspiracy that's been working very hard to keep everyone dependent on oil for as long as possible.

If you have any serious interest in electric cars, take a look at the Tango.  As far as design and safety goes it’s a real winner.  It has a roll cage that meets NHRA specifications and even comes with a cup holder.  The company is even located in the Pacific Northwest in Spokane.  My sources also tell me that the President, Rick Woodbury, rebuilt a sailboat with his son.  During the sixties he was living in Berkeley and studying Tibetan Buddhism.  [Check out the video clip on the Tango from Evening Magazine here.]

Show Me The Wood! 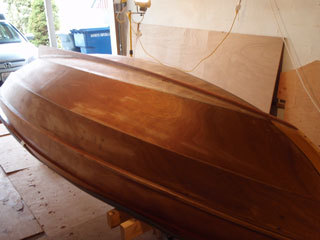 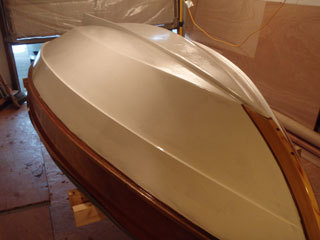 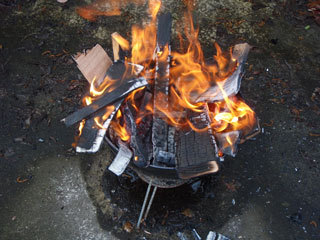 I originally had planned to paint the entire exterior of my Joel White Pooduck Skiff, but after so many people asked me if I was going to leave the hull "bright finished" I decided to varnish the sheer strake, to show off a little of the wood.  I think that's a good compromise.  I don't want people to think that it's made of fiberglass after all that hard work!

I finally started the long slog of several coats of varnish and several coats of primer followed by paint.  When the paint is dry she'll be totally ready to hit the water as a rowboat (with the addition of a couple oarlocks).  Still, I don't plan to launch her until she's ready to sail away.

I cleaned out the shop a little, burning wood scraps in an old barbeque grill.  It's a respectful way to dispose of all that beautiful cedar, oak and mahogany.