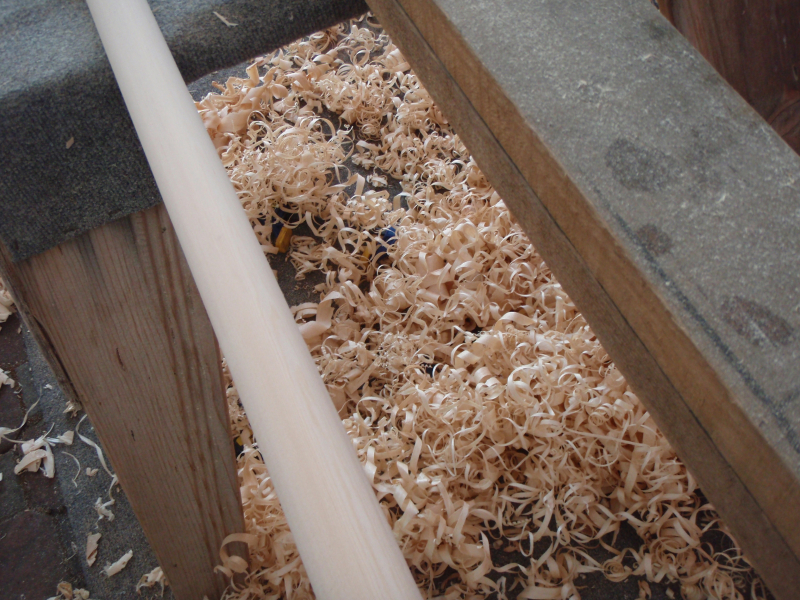 I finally finished carving out the spars for my Joel White Pooduck Skiff. I set up a couple sawhorses outside under a backyard storage tent that has been holding my kayaks for the past one-and-a-half years, ever since I cleared out the garage to build my boat. The spars are made out of Sitka Spruce I ordered from Edensaw. This is great stuff -- totally clear, straight grained and easy to work with a plane.  Its strength and light weight makes it the standard for spar material.  I even have a 11 ft long rough 2x4 left over!

I feel like I'm limping toward the finish line. I spent all day carving out the mast and my back is sore and tools dull. Fortunately the boom has a square cross section. It's a real pain trying to make them round.
The time pressure to get this boat done by the holiday weekend has forced me to be resourceful in getting by with tools I have on hand. For instance, instead of taking the mast blank to Bates Boatbuilding where Ricardo could have helped me cut it out precisely with a bandsaw, I just roughed it out with my old circular saw.  It worked suprisingly well.  Tomorrow I'll do one final sanding and rub on an oil finish.  No time for varnish.
THE OFFICIAL LAUNCH DATE is Saturday July 5th, 2008 sometime.  Unfortunately it'll be low tide midday which will make for a long slog down to the water.  I would have launched on the July 4th holiday but too many other things are going on, including the little cruise I booked on the Hawaiian Chieftain during the Tall Ships Festival.  She'll be having a mock battle with the Lady Washington.  Stay tuned for some cool pics of that!

Remember Super Secret Kayak Project X that I reported about back in February? That was the skin-on-frame kayak commissioned by Dick Mahler, designed and constructed by Portland, Oregon kayak builder Lodro Dawa of Monkcraft Kayaks. Well I missed the South Sound Traditional Inuit Sea Kayak Symposium (SSTIKS) this year so I didn't get to see it unveiled.

The kayak is a three piece Greenland-style skin-on-frame. It has watertight hatches and bulkheads which attach together with bolts. Dick told me that Chris Cunningham, editor of Sea Kayaker Magazine wanted to do an article for Sea Kayaker on it. Chris requested that Dick make sure that no pictures of it get out on the Internet before his magazine article came out.  Well, too bad, because the cat's already out of the bag!  Remember you saw it here first! These are some of the pics that Stephen S published recently on his awesome SSTIKS gallery.
Great job, Lodro!  I heard she's a pretty sweet ride too! 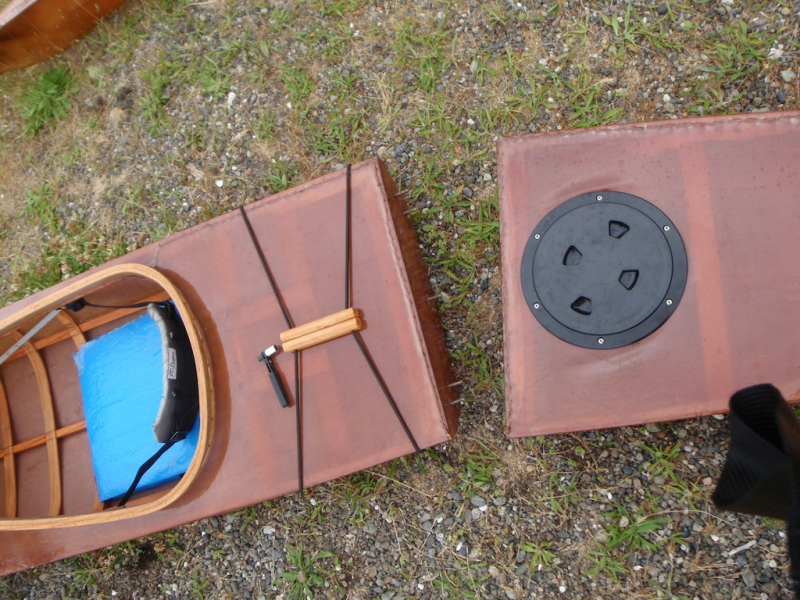 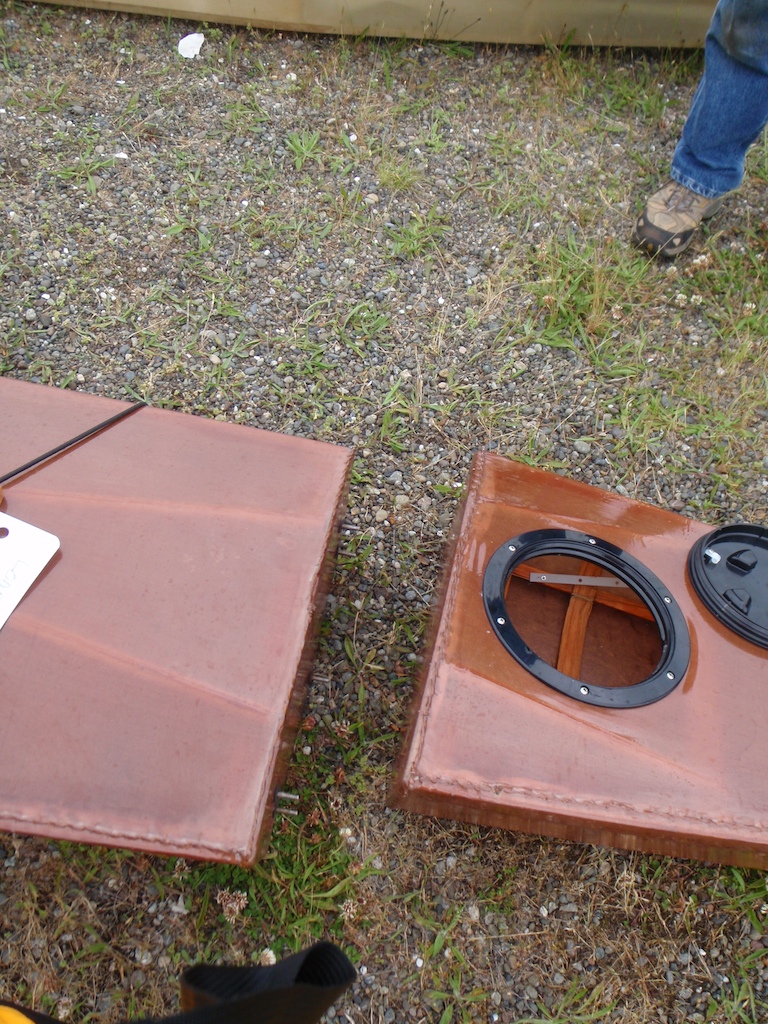 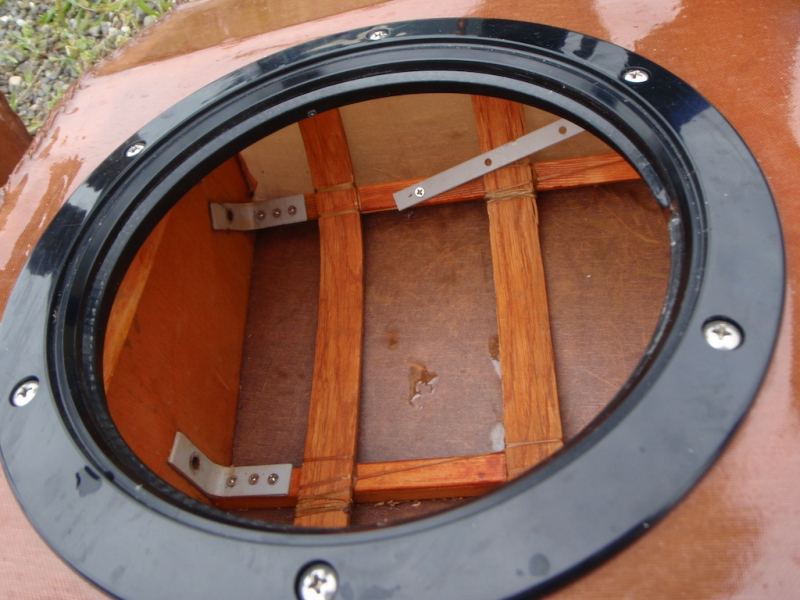 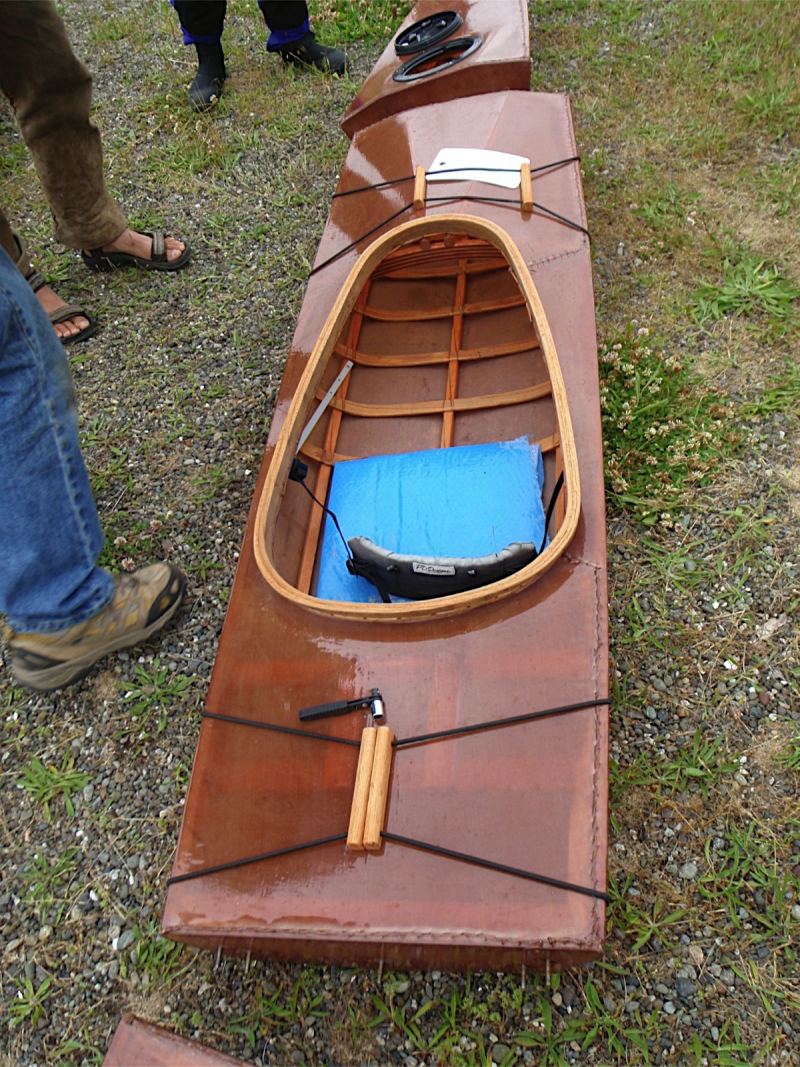 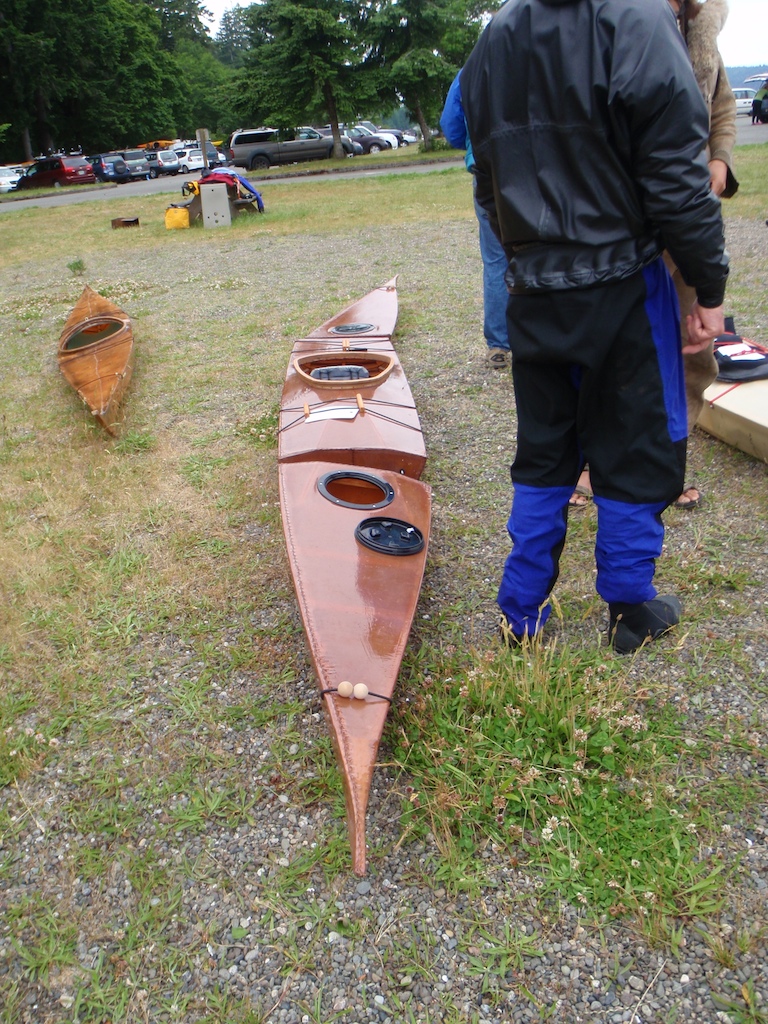 Pooduck Skiff: Down to Brass Tacks 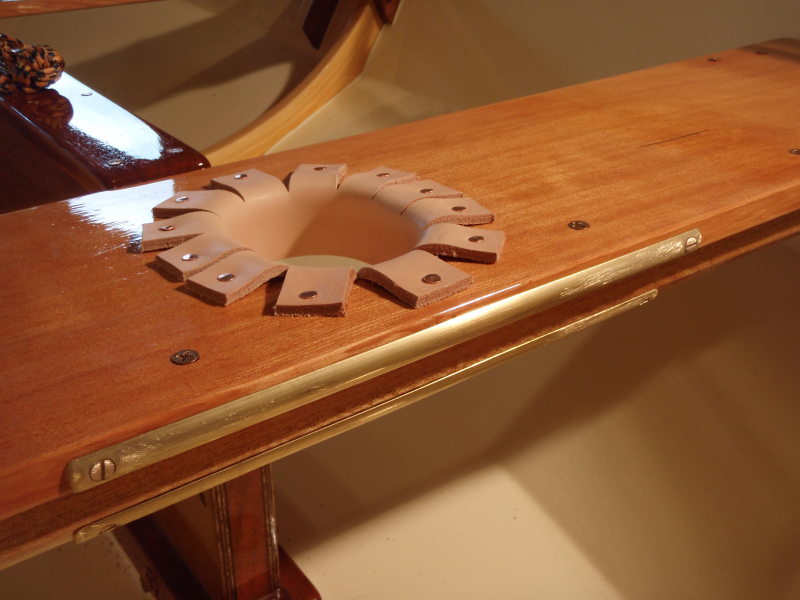 Just a progress note on my Joel White Pooduck Skiff: I lined the mast partner hole with leather, secured with tacks and Pumbler's Goop. Note the brass half-oval rub strips positioned to protect the seat edge from abrasion from the halyards. 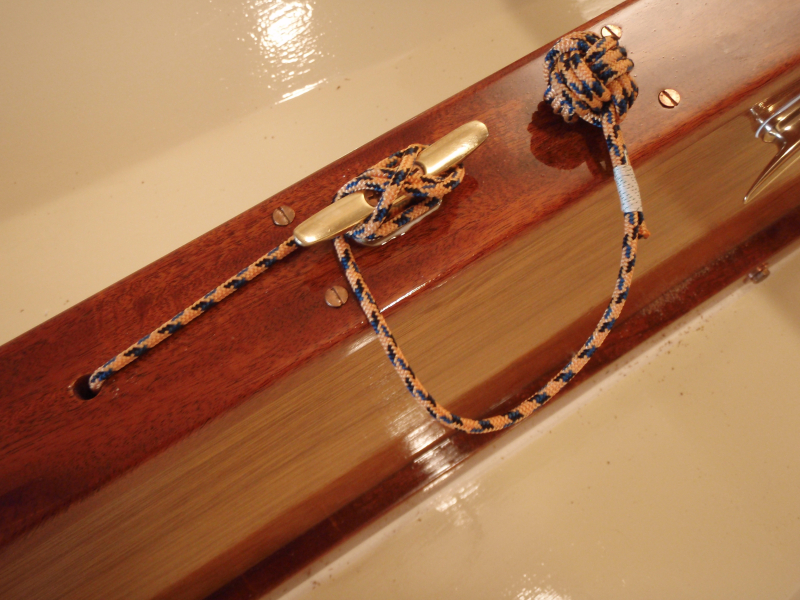 I installed the trunk cap using silicon bronze screws and 3M 5200 adhesive. The cap has a couple cleats on it: one for the the jib sheet and one for the centerboard pennant. The plans called for wooden jam cleats but I've gotten too lazy this far into the game to carve them myself, so I just bought a couple small brass ones.  I put a little monkey's fist on the end of the pennant to give it more of a nautical flare. 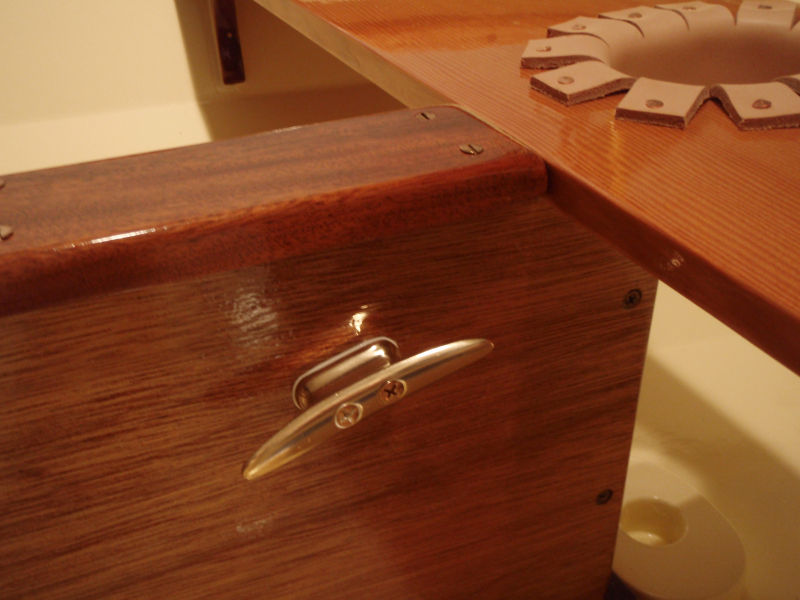 I also installed two larger cleats on the sides of the centerboard trunk for the jib and mainsail halyards. 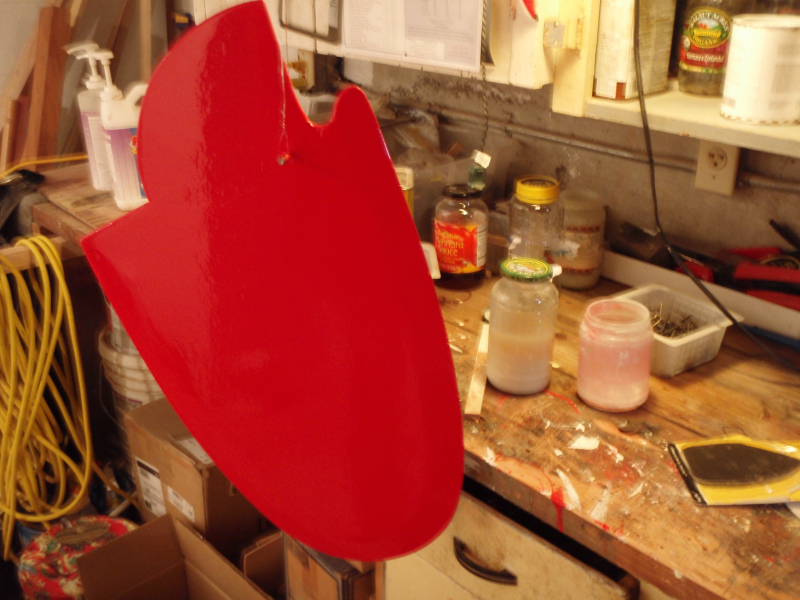 The swing-down part of the rudder got a couple coats of red paint. 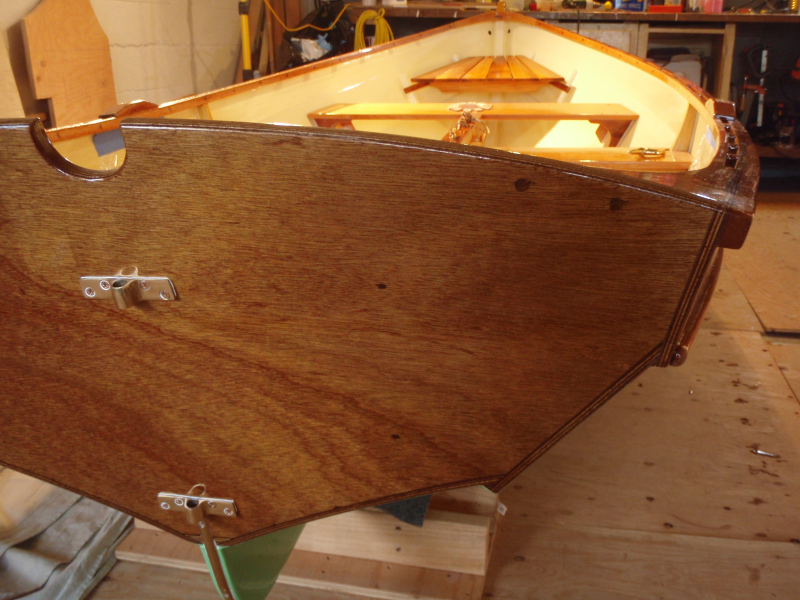 The gudgeons were installed on the transom, with screws and more 3M 5200 (I like that stuff!) 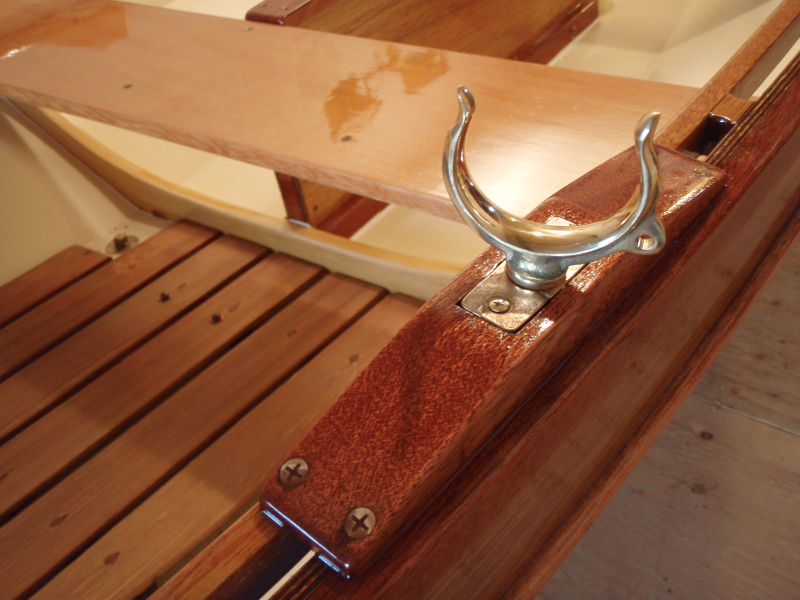 The oarlocks were fixed in place with screws and epoxy. By the way did you know that "oarlock" is pronounced "rowlock"? Thanks to Richard Lovering for pointing that out to me. It's probably another one of those silly British nautical things.  When the epoxy has cured she will be ready to row!