I don’t think the IceKap tracks very well. There -- I said it! That’s Lesson#3. This isn’t supposed to be an advertisement for the IceKap anyway, just a collection of my personal impressions. During the crossing over to Cypress the kayak tended to wander and I’d be doing draw strokes to avoid running into my friend Tom Sharp who was paddling a classic Mariner Coaster. I thought at first maybe it was because I packed it too heavily in the bow, so we stopped at Strawberry Island and I shifted some cargo.  It didn’t make much difference. Dropping the skeg fixed it though but also added more drag.  With the skeg up I tended to lead just ahead of Tom but with it down I found myself right beside him. 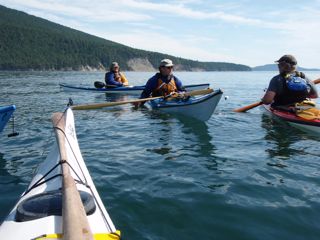 Just north of Strawberry we happened to run into Tom Banks paddling with his wife and another group of kayakers. He was paddling his low−volume IceKap, named Blue Ice. I had been exchanging messages with him just a few days earlier, after having read his testimonial about the IceKap on Sterling Donalson’s website. To run into him on the water like this was just an amazing coincidence! Sterling had told me that Blue Ice was the second IceKap ever made (completed about a year and a half ago). Tom Banks said that the low−volume and the standard volume models really behave like completely different boats. I should have asked him to be more specific on that. While on the water he popped his sprayskirt, slipped out of the cockpit and sat on the back deck so he could show me his Nimbus seat. He agreed with me on the tracking issue and said that he paddles with the skeg down almost all the time. Otherwise he seemed very enthusiastic about his boat, which is carbon composite layup. He can even do forward finishing handrolls in it--pretty awesome!


Tom Banks and his group were paddling the opposite direction that we were, which suggested to me that we were going the wrong way. In fact we ended up fighting a little ebb current. I’ll blame that current for my sluggish paddling. Even at a sprint I couldn’t get the IceKap over 4 knots. Sterling said that other paddlers can typically cruise at 5.2 mph (statue miles per hour, not knots). I don’t understand why anyone would measure speed on the water in mph and not knots, except that it might make you feel like you’re going faster. Lesson#4: Set your GPS to mph, not knots. 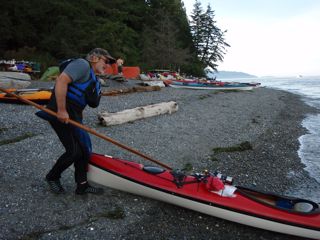 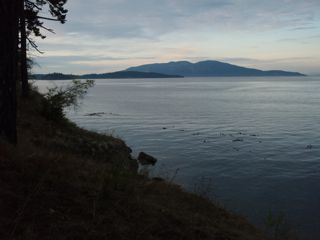 We ended up stopping at Cypress Head. We had wandered around at Pelican Beach earlier, but the campground there was crowded and felt very exposed to me. The campsites at Cypress Head are set in the trees and located right on the headland −− much more scenic, sheltered and private. Tom decided he wanted to paddle back to Anacortes and go home, so he left me alone to make camp. By the way it sure was a pleasure to drag a fully loaded kayak onto the beach by myself and not have to worry about scratching up the beautifully varnished wooden bottom (especially since it was not my kayak!) Actually the IceKap is so light that I was able to carry it loaded by myself short distances on the beach over rocks and driftwood logs. The lighter weight does make a difference, even with a loaded boat. 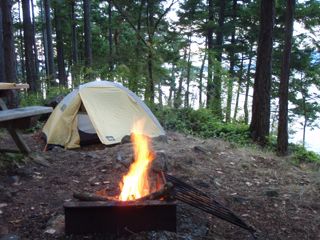 I made a campfire even though it was a warm evening. There is something comforting about a big campfire. It turns an otherwise vacant patch of dirt into a home away from home. Plus it’s entertaining burning stuff and you can burn a lot of your garbage instead of packing it out with you!