The Dash Point Pirate
Home Archives Profile Subscribe
The Paradigm Shift I Didn’t Make
Set a Course for Adventure and Raise the Muslin! 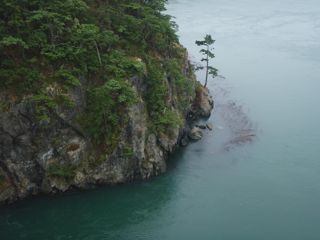 I got up at 5AM Sunday to break camp and cross over to Anacortes during slack water. As I shoved off the sky started to grow brighter and it began to rain. Except for the raindrops on the surface the water was completely still. A porpoise swam by. A warm breeze blew gently from the south. An early morning ferry passed close in front of me. From what I could see in the windows, it was mostly empty except for a handful of passengers. I saw no other boats on the water.
After landing and unpacking back in Washington Park, I drove down to Deception Pass to find some rough water. I grabbed a  second breakfast then took a nap in my car at the Bowman Bay boat launch. Later I was awakened by the arrival of a group of kayakers and a van pulling a trailer with about a dozen kayaks. When they started doing warm-up exercises in a circle on the grass I decided I would get going.


I warmed up by doing a few rolls in Bowman Bay. I’m used to an “ocean sized” cockpit but even with the large cockpit I felt that I could get a good grip on the underside of the deck of the IceKap with my knees. It felt a little stiff doing layback rolls (I think the backband was a bit restrictive) but forward finishing rolls were very easy, and the IceKap felt like it wanted to just pop back upright.


Then I sprinted toward Deception Island, with the skeg down. It seemed faster today, probably because the boat was empty. I wish I knew how fast I was going this time, but unfortunately the battery cover on my GPS came off and it got wet. It twisted off because I had a lanyard attached to the battery cover lock.  Lesson#5: Electronics will fail.
The IceKap’s maneuverability made for easy paddling around the rocks and kelp at Deception Island. I pulled the skeg up when I approached the Island. I didn’t notice any weather cocking with the skeg up when I left the Island and headed into the Pass with the wind at my beam. 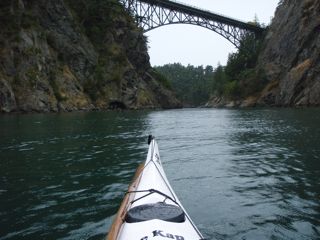 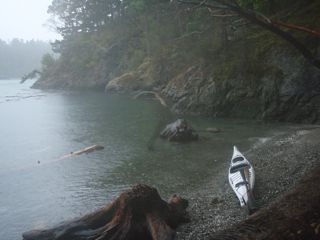 I timed the trip so I would enter the Pass at slack, but still had to work against the growing ebb, paddling close to the rocky shore and taking advantage of back eddies when I could, and sprinting through the current when I had to. I really loved the IceKap’s agility here. The light weight made for quick acceleration and turning. Did I mention that Sterling says the IceKap will turn 360 degrees in three strokes?


Playing in the current was a real pleasure. Edging was smooth, and the IceKap felt very stable in the waves, despite the hard chines and 19.5 in beam. Once in a while some standing waves would pop up as the current evolved. They weren’t big enough to do any surfing on but it was fun to roll around in them. 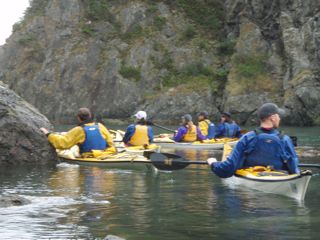 Finally the kayaking class arrived. Soon after, a whale watching boat came in close to watch the kayakers. I couldn’t resist showing off for the tourists. I did the trick where I appear to capsize accidentally and then stay under for as long as possible before slowly rolling back up. If you’ve ever watched someone else do that it’s unnerving because you don’t know if the guy is drowning or what. Another cool trick is to paddle into the current and then fall into a balance brace. The current carries you floating on your back and it feels like you’re flying (I learned that from Shawna and Leon of Body Boat Blade). 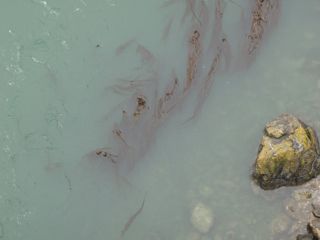 So in conclusion I think the IceKap is an awesome kayak! I was unsure the first day out, but the second day at the Pass really convinced me that it is really as good as people say it is, for Greenland style rolling, playing in rough water, and light camping. Apparently it excels in the surf and in very nasty outer coastal conditions as well, although I can't speak from any experience on that. It's also fully equipped to do the BCU thing. So if that’s your paddling style than I highly recommend it. In addition, the state−of−the−art lightweight construction makes a difference in performance as well as in the ease of cartopping and resistance to getting holes in the hull. I would definitely buy an IceKap myself, and still might someday, but I guess I realized from this experience that I have a number of low volume rolling/light touring boats already and didn’t really need another one. Maybe what I really wanted was something different, like a fast boat with enough volume for multiday touring.  Or maybe it's because I just can't get emotional about a boat that's not made out of wood.


Do you think I could get Sterling to sell me a license to build an IceKap in vacuum-bagged cedar strip?