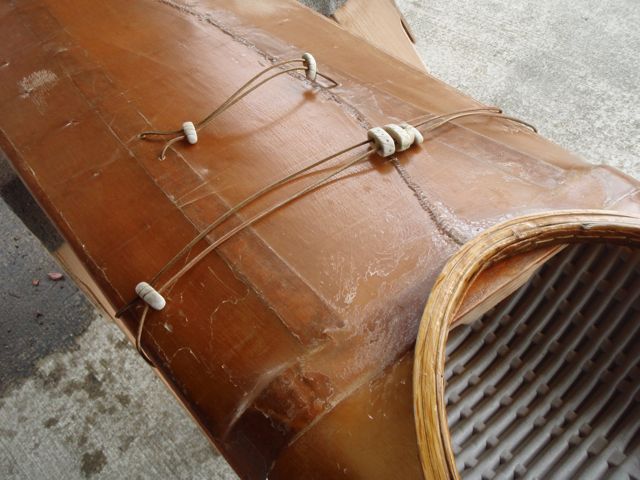 I know I said I wasn't going to be doing any boatbuilding until the end of 2009, but the reason for that was partly to to give myself time for maintenance of the boats I already have.  So now I'm starting my long list of kayak projects.  First of all, I'm reskinning my historic reproduction of the Howard Chapelle's 1948 Greenland kayak, fig. 208 of Adney and Chapelle's book The Bark Canoes and Skin Boats of North America.

Here is what my kayak looked like after two years of regular use and storage outside: generally in good condition except some wear around the coaming, especially the back deck, and where my knees and feet pressed against the underside of the foredeck. Also, the thin coat of one−part polyurethane that I put on is flaking off from the underlying two−part polyurethane. Brushing on that coat of one−part hardware store polyurethane was a big mistake. I did it purely for cosmetic reasons, to cover the glossy sheen of the two-part polyurethane. It lasted a year before it started to peel off. 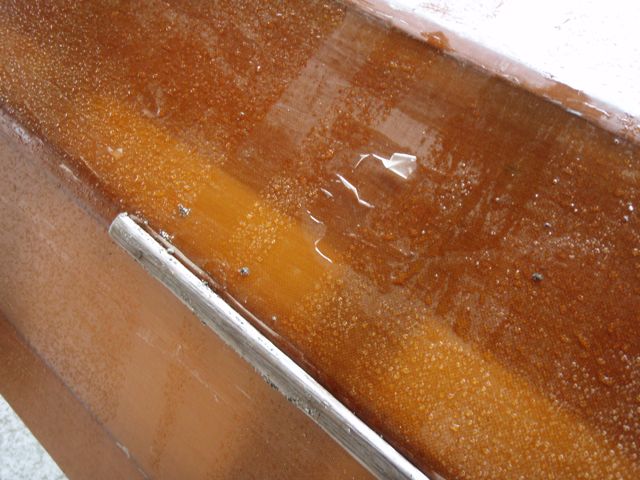 If it wasn’t for all the unsightly peeling I probably wouldn’t have bothered replacing the skin for another few years, but it had gotten just too embarrassing to show off anymore. So I finally took a box cutter to the skin and pulled the whole thing off. This also gave me the opportunity to remove the rub strips I glued and pegged to the keelson and chines. Although they were traditional, the skin was plenty abrasion resistant by itself so they really weren’t necessary. I also suspected they added some drag and slowed the kayak down. I also wanted to tweak the frame a little, giving the bow a finer entry and see if I could finally figure out why the kayak tended to pull to the left. 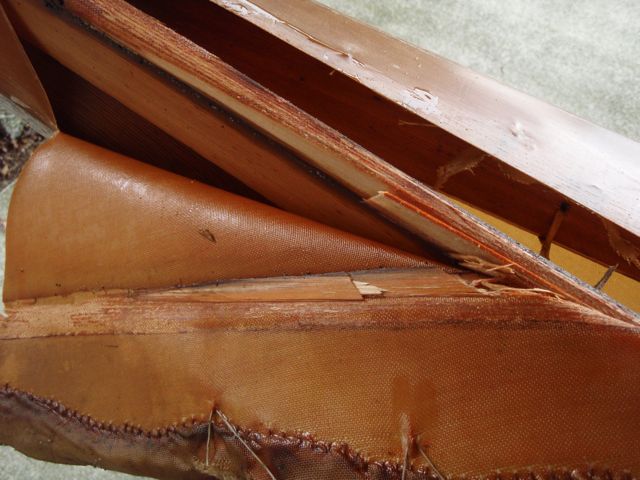 The skin adhered well to the frame. I was able to pull it off, but had to cut the skin into several pieces to make it easier. In some areas, it stuck so well to the frame that it tore chunks out of the gunwale and keelson. Whether that happened depended on if I was pulling the skin with or against the grain. If you ever do this yourself, I recommend that if you start tearing pieces of wood out just pull in the other direction.


The frame looked like it held up well. The lashings were still tight, except for a couple lashings in the floorboards.  No signs of rot, but the frame felt wet and heavy. It was probably seasoned like driftwood. I found pockets of sand at the ends. I suspect that it never completely dried out since the first time I took her out. The moisture would explain the significant weight gain over the years: the day she was completed she weighed 29 pounds, but last year in the middle of winter she weighed 44 pounds. Originally, I didn't oil the frame because I thought it an unnecessary step to preserve the wood which would be constantly exposed to saltwater. But this time I’m going to coat it generously with tung oil to see if it will inhibit the absorption of water and keep the weight down.


Next step: repairing the frame 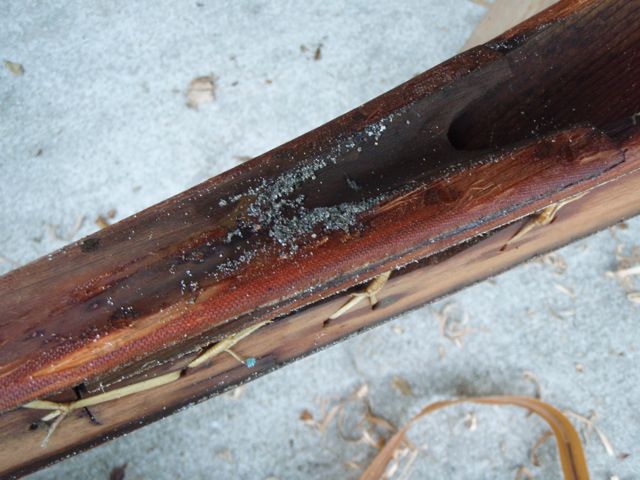