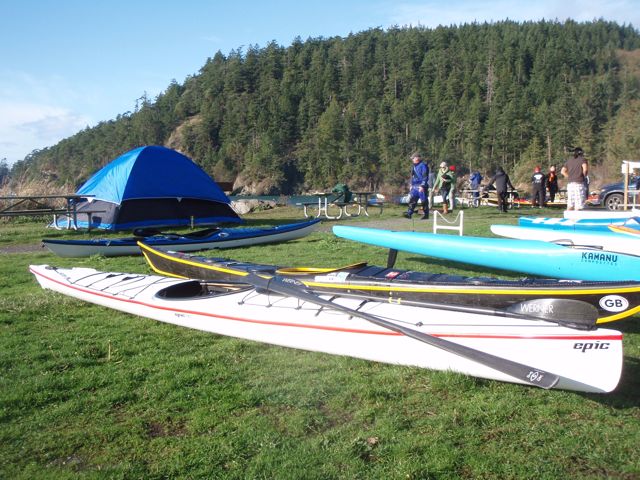 Here is a picture of my new kayak. It is the first production kayak I've ever owned. All my others were skin-on-frame or homemade wooden composites. So yeah I actually did make that paradigm shift after all.  I think the whole time I was looking for that perfect playful low volume rough water kayak I must have really wanted a fast touring boat. When a friend let me try his Epic Endurance I was so impressed by the comfort, speed and maneuverability that I knew that this was the type of kayak I needed to go farther and faster. Hey if it's good enough for Freya Hoffmeister it must be good enough for me!  I know this kayak is ugly as hell but I think once I start covering the deck with corporate logo stickers it will look much better.

I had my Epic for week before the Deception Pass Dash and had only paddled it 4 times. During that week I switched back and forth between using my Werner Ikelos blade and my Superior Kayaks carbon Greenland paddle. I think I hadn't used my Werner for at least a couple years (since the Baja Incident), but I convinced myself that by using it I could paddle something like 0.2-0.3 knots faster. It was actually not very easy to determine that because of all the confounding currents on Puget Sound. 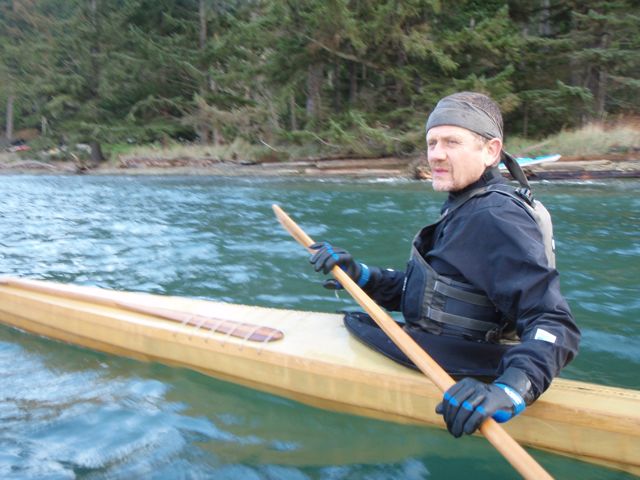 Using my Werner in the race turned out to be the biggest mistake of the day. For one thing I am pretty rusty with it for rolling. For another the conditions turned out to be pretty challenging.  Lisa J recently posted the recorded wind speed in knots on the SKSB-NW message board:

The steep waves reflecting off of Deception Island demanded a lot of bracing.  Just after rounding Deception Island I pulled out into a protected spot and switched to my Greenland paddle. That cost me a couple minutes but WOW did I feel so much better! I felt like I was ready for anything and I was finally able to take advantage of the Epic 18x's speed on flatter water. Pushing against the ebb current was not a problem this year compared to last and being able to precisely control tracking with the rudder was a real pleasure.

There was a brief moment of relief when the safety crew around Strawberry Island told us "It's all downhill from here!" Of course they didn't count on the wind channeling through Canoe Pass, the steep standing waves in the channel, and all the chaotic water around Deception Island that we had just gone through before. It was actually a much tougher fight back with the wind and waves in your face but totally exhilarating.
There was a guy surfing the standing waves in the middle of Canoe Pass. I don't know if he was part of the rescue team or what.  It wouldn't have surprised me if he was a racer.  More than a few people must have been tempted to forget the race completely and take advantage of the rare opportunity to play in such fantastic conditions. 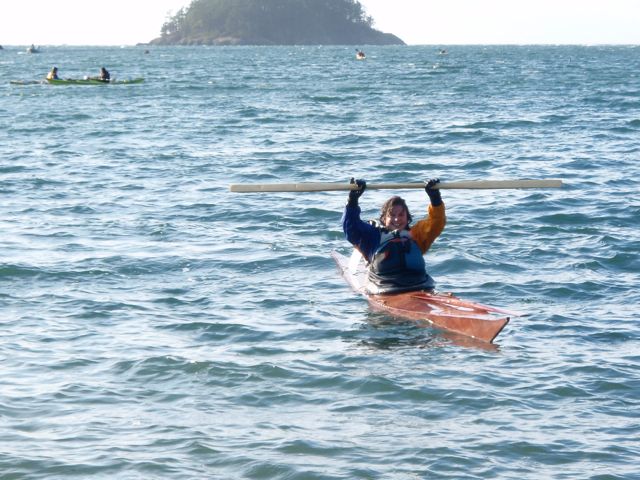 Some results:
There were 126 racers.
Thirty-two did not finish.
I finished 12th out of 16 in my class ("fast sea kayak") with a time of 87 min 12 sec.  I was the last in my class who finished.
According to my GPS the course was 5.93 nm.
Fifty-two percent of those in high performance kayaks ("surf-skis") did not finish compared to 25% of those in fast sea kayaks and 22.5% in sea kayaks.
The video below was filmed by Dubside from the Bowman Bay dock and the on water footage was taken from the back of my kayak. 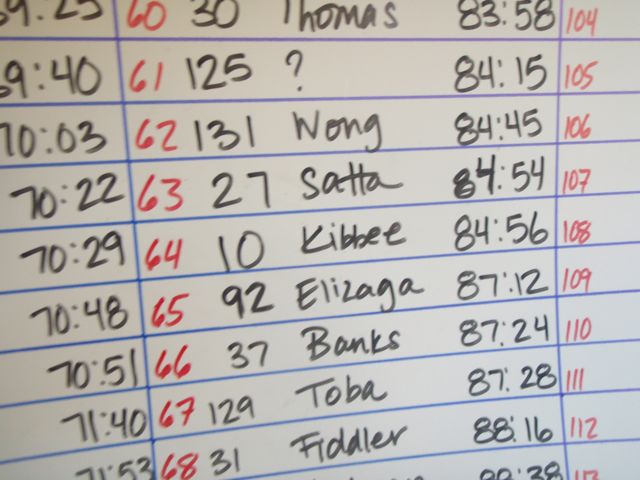 Great photos, and I'm looking forward to your video Andrew. One more result for you- 4 out of 5 of us in skin on frame boats made it to the finish, including the final finisher. :)

Were you the one in the transparent Yost-style baidaika-type kayak? That was one fast kayak!

Yep, that was me. It's a fast boat in certain conditions, although I sure spent a lot of time w/ my bow buried on Sunday, both upwind and down. I also got stuck when my bow went under some kelp, which wedged between my boat and my spare paddle quite solidly. That was pretty funny, paddling backwards, upwind, outside of Deception Island. Sounds like you saw me out there at some point. ps- i'm the same guy who drove down to see your baidarka about a year ago. decided to build the clear boat instead. :) i bet the dimensions are pretty similar.

Epic seems kinda skinny..got no backend..like you Andrew..but ugly? When it grows older like me it will shorten...thats were the new Coasters come from...I LOVE my Coaster..it would have been grrreat in the DASH
cheers Tom