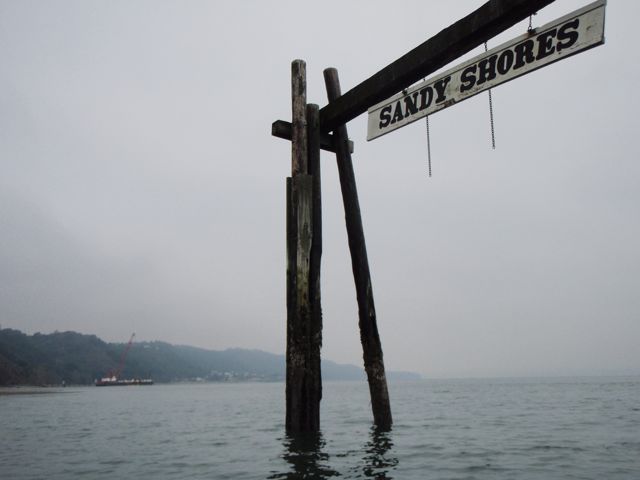 An article published on the front page of the Tacoma News Tribune today says that the mining company Glacier Northwest ran out of time yesterday to build the new dock that was going to serve their proposed gravel pit mine on Maury Island. The gravel pit mine is located 2 nm right across East Passage from where I live on Dash Point. Local island residents are concerned that the mining in the area could contaminate their water supply with arsenic that was deposited all over the Tacoma area by the old ASARCO smelter decades ago.

According to their permit, construction needed to stop on January 14th and could not resume until August 15 in order to protect spawning herring and migrating salmon. The dock supposedly is "90% done" and they were only a day short of completing it.  Some of that delay might have been due to the protesters who chained themselves across the road leading to the construction site and took to the water in kayaks:

Opponents, some of whom have fought the gravel mining and transport project for more than a decade, have resorted to civil disobedience during the past month, chaining themselves together to block construction access. On Tuesday and Wednesday, they launched a flotilla of kayaks to get in the way of cranes and pile drivers. Glacier Northwest was forced to halt pile-driving to avoid injuring the protesters. “They were trying to maneuver themselves under the crane,” Stoltz said. “We couldn’t proceed safely with them trying to get into harm’s way.”

Of course Glacier Northwest won't admit that protesters contributed at all to the construction delay. Instead they are blaming the weather. Glacier Northwest is also implying that the protesters are doing more harm to the environment than the mine is, specifically by trampling on lance eggs on the beach. The News Tribune of course gives them plenty of opportunity to spew this ridiculous propaganda.  It's right out of the corporate playbook, along with characterizing protesters as "ecoterrorist" bums who can't hold down jobs, and scaring people into thinking that jobs will be lost and the local economy will suffer if Glacier can't mine there. The ultimate spin of course is to turn the the environmental issue around completely: they say that shipping gravel all the way from Canada will leave a much bigger carbon footprint than mining it here, so actually the mine is good for the environment!
I paddled over to the gravel pit mine this afternoon to see for myself.  They are actually still hard at work: only the work underwater must cease during the January 14 - August 15 period.  They will likely continue to built everything that they can above water and on land in the meantime.
By the way, I also have issue with the title of the News Tribune article, "Battle Over Maury Island Gravel Mine Suspended". The pile driving may have stopped but I'm sure the battle is going to continue. This several months delay might allow time for legal action that will stop the mine completely. 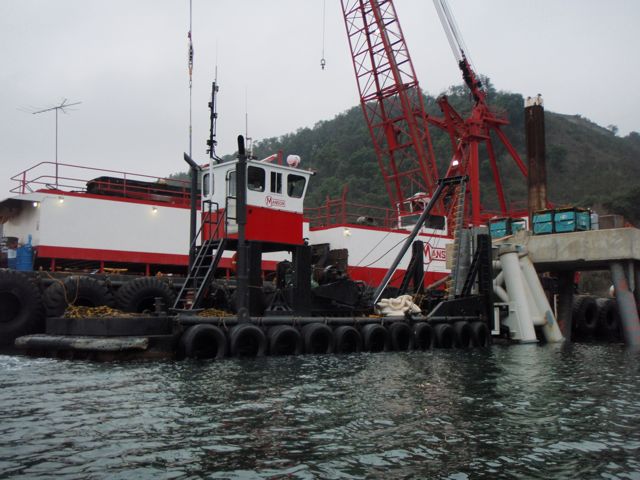 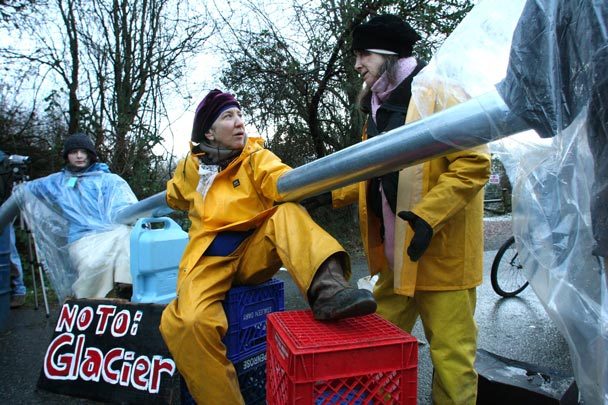 [Picture from today's Seattle Times]
Things are starting to get interesting across the water on Maury Island! Protesters are chaining themselves together to stop the construction of the Maury Island gravel mine. If they can prevent construction until January 14th, construction may have to be delayed until August.
For over a decade now, Glacier Northwest, the Northwest subsidiary of one of the largest cement manufacturers in the world, the Japanese-owned Teiheyo Cement corporation, has been pushing for approval to dig a giant gravel pit on Maury Island. The pit will be the largest gravel and sand mine in the nation, located right in the heart of Puget Sound. Glacier Northwest has proposed extracting 1.5 – 2 million tons of sand and gravel per year, "depending on market conditions". The gravel would be loaded onto barges, which would require the construction of a new dock on the site.


There are a number of things that are concerning about the proposal.


The old ASARCO smelter in Tacoma spewed lead and arsenic all over the areas north of Commencement Bay, including Federal Way, Normandy Park, Tukwila, and especially over Vashon and Maury Islands. Digging on Maury Island not only risks releasing carcinogenic dust into the air, it also reduces the buffer between the toxic soil and the aquifer and risks contaminating the aquifer with heavy metals by a direct breach during mining operations. The aquifer is only source of water for island residents. It is estimated that 10,000 gallons of water per day would be required to control the carcinogenic dust, further compromising the island water supply.


To transport the gravel by barge a dock would be built right over the State’s only designated aquatic reserve. Maury island is one of the healthiest and least impacted marine shorelines in the state. The habitat supports migrating Chinook salmon and resident Orcas which feed in late fall and early winter months. In fact, in December 2007, Orcas were documented by the National Marine Fisheries Services in the waterways adjacent to Glacier's proposed dock on more days than they were documented at the San Juan Island's State whale watching park for the months of July and August combined. Dock construction and the subsequent barging operations would create underwater noise at levels that are harmful to the whales and other marine mammals.


It should be noted that Glacier Northwest has paid over $600,000 in fines due to environmental violations in the past decade alone, and as recently as 2007 was fined over $200,000 for the company's discharge contamination of the Thea Foss waterway. The reality is that for major corporations, fines for environmental violations are just part of the the cost of doing business.  The potential profits are worth the risk of getting fined for breaking the rules.


Recently and right after he was voted out of office, Republican Public Lands Commissioner, Doug Sutherland, signed a 30-year lease to allow Glacier Northwest to build their new dock. I'll bet that the Maury Island issue was no small reason why Sutherland lost the election (at least that's why I voted against him).  Signing that lease was the final step needed to get the gravel mine started. The very next day I noticed a big crane working on the shore, which is a couple miles across East Passage from my neighborhood on Dash Point. The bright lights at night suggest they are working around the clock to get that dock completed.


How this can happen after governor Christine Gregoire announced a major plan to clean up Puget Sound three years ago?  It was described as the most-ambitious plan to date to clean up toxic dumps around the Sound, prevent oil spills and take other actions to revive the ailing estuary.  The gravel mine is a direct contradiction to Gregoire’s rhetoric.


Sea kayakers should take notice. If you value the health of Puget Sound and are willing to do more than make sure your septic tank is in proper working order, not wash your car in your driveway or dump your used motor oil down the drain, then educate yourself and get involved.  Spread the word and tell your friends!


Next time there is a flotilla rally, I want to be there! 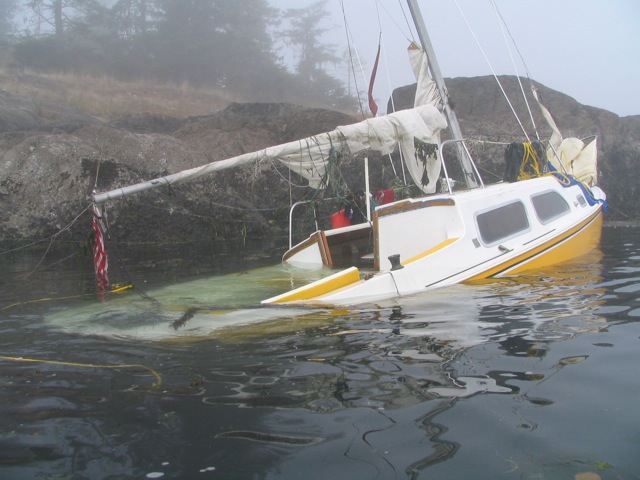 I've been trying to get my pics organized lately and found this picture I took about three years ago. I came across this fresh sailboat wreck on the west side of San Juan Island, just north of False Bay. Surprisingly, no one seemed to be around at the time so I paddled in close expecting a dead body to pop up out of the cabin.  After a few minutes I noticed a woman standing on the shore.  It must have been her boat because she looked pretty upset. After getting lost in the fog in False Bay for about an hour I passed the wreck on my way back.  The woman had been joined by a man in a dinghy and a diver. They were salvaging what they could from the wreck. They were in no mood to chat but told me it had broken free from its anchorage off of Lopez Island.