A Day Trip: Sea Kayaking from Anacortes to Friday Harbor 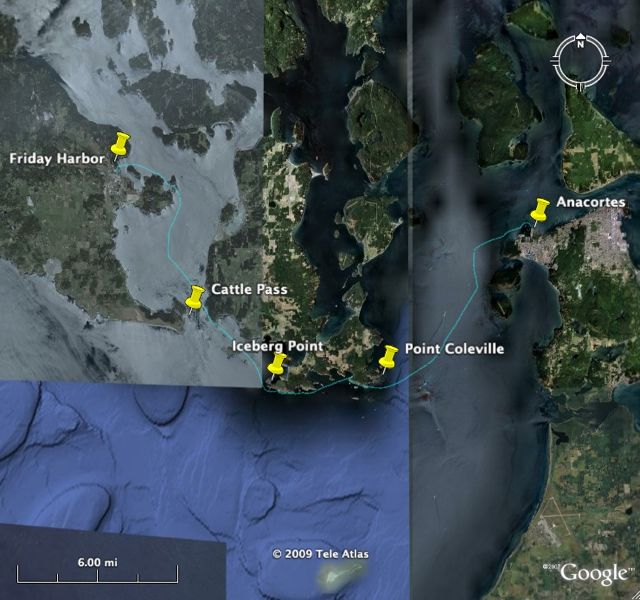 I'm a little late posting this report. This is the trip I took on Monday, May 25th. I had wanted to try paddling from Anacortes to Friday Harbor for a while. My friends have called this the "ultimate day trip". It can involve challenging conditions in Rosario Strait and south of Lopez Island, and paddling through a large tidal race in Cattle Pass between San Juan and Lopez Islands. Experienced kayakers will spend time playing in Cattle Pass as the current hits its max before continuing on to Friday Harbor to catch the ferry back to Anacortes.

Since fares are only charged going west on the ferries, the return trip is free! That's a great deal considering the fare for a car and driver is over $50! You will need to bring wheels to cart your kayak if you plan to walk on to take the ferry back to Anacortes.

Memorial Day weekend happened to have perfect currents for this trip: an ebb in Rosario Strait in the morning predicted for 3.4 knots, and a flood in San Juan Channel in the afternoon at 4.9 knots. But the southerlies, predicted for Sunday and Monday at 15-20 knots, had me worried. The "wind against current" phenomenon would steepen the waves in Rosario Strait and stir up reflecting waves off the cliffs on the south end of Lopez Island. If you haven't read it already, this is a good time to read Rob Gibbert's excellent incident report in the August 2008 issue of Sea Kayaker Magazine about this very same trip that turned into a total disaster.

As it turned out, Warren Williamson planned to do the same trip the day before I wanted to, on Sunday. Sunday evening I asked him how conditions were and he wrote:

... there was a little wind out in Rosario, not bad. The waves were just starting when I got to Davis Point [Cattle Pass]. They got big. I surfed and worked out in the waves for over four hours. Mat and Djuna [from Body Boat Blade] were there.  We had a blast... I think you'll have the same conditions tomorrow.


Actually, the forecast called for the wind to lighten up to between 10-15 knots in the morning so I expected to have an easy time of it on Monday. 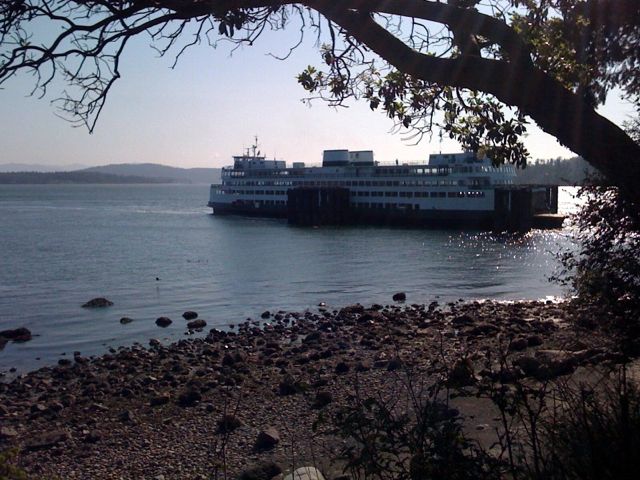 I arrived at the Anacortes ferry terminal a little before 9AM. I was the only kayaker there. "Where is everybody?" I thought. "Don't they know that this is the perfect day to do this trip?" I got a parking spot in the upper parking lot of the terminal right next to the trail that goes down to the beach. It costs $10 to park for 24 hours. If you plan to do this, be prepared to carry or slide your kayak down the steep bank to the water.

It was a lot windier than I expected. I could see whitecaps all over the confluence of Rosario Strait and Bellingham channel. I had second thoughts about continuing but I decided to go ahead and see what conditions were like in the Strait. Just off of Green Point the waves were at least 4 ft. As I continued west across the Strait they got a little smaller but then got bigger again. I was paddling with a strong wind blowing at my beam toward James Island and somewhere in the middle of Rosario Strait I decided that I wasn't having fun anymore, and wondered what was I doing out here alone while everyone else was at home planning their holiday barbeque. Actually, I wasn't completely alone: a sailboat passed by fairly close, double-reefed. I am sure the wind was blowing at least 20 knots!

I almost turned back on this trip. I felt like I wasn't making any progress in the wind and waves. I figured that it could be a very long and tiring journey if conditions were going to be this challenging all across the Strait and especially south of Lopez Island so I decided to head back to Anacortes. The current had carried me far south off of Burrows Island. Since there was no way I could make significant progress against a current that strong I just paddled with the current, hoping to duck in between Burrows and Allan Island for protection.  But further south the waves became smaller, so I changed plans again and decided to cross the Strait after all.

I was traveling at 6 knots down the Strait. When I reached Point Colville at the southeastern tip of Lopez Island I slowed to a crawl. I suspect there is a large back eddy all along the south end of Lopez Island between Point Colville and Iceberg Point because I didn't go much faster than 3 knots. I parked in the middle of a kelp forest to eat lunch.

Beyond Iceberg Point my speed picked up as I approached Cattle Pass. Even from over a mile away I could feel it sucking me in. I struggled to bring my kayak close to shore when I realized I was headed straight into the raging whitewater.  I found a relatively protected path between Lopez and Deadman Islands and hauled up on Deadman Island to take a closer look at the chaos in the Pass. The flood wouldn't reach its max for another hour and a half. Well, I really didn't care to stick around to see that, and decided I would get out as soon as possible. With help from the current, I was doing 7 knots just north of Cattle Pass toward Friday Harbor. 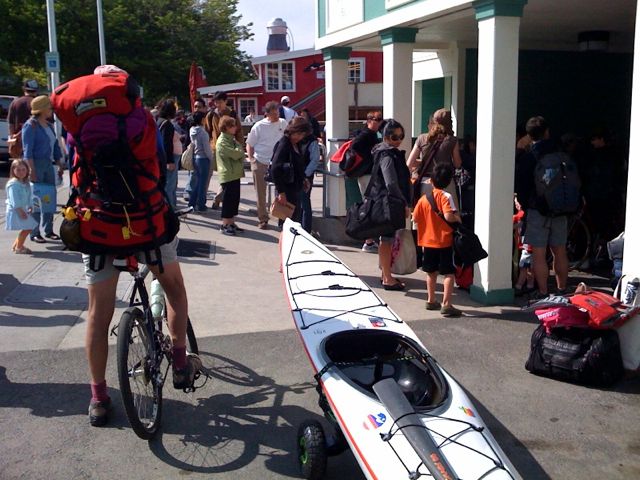 My Epic 18X Ultra, in line at Friday Harbor for the return ferry to Anacortes.

I paddled into Friday Harbor with just enough time to put my kayak on my NRS C-Tug wheels, take a shower at the marina, and walk right onto the ferry along with a large crowd of tourists returning home for the holiday weekend. Unfortunately I had a bunch of really great on the water pictures from this trip, but can't find them now and I think I erased them all!