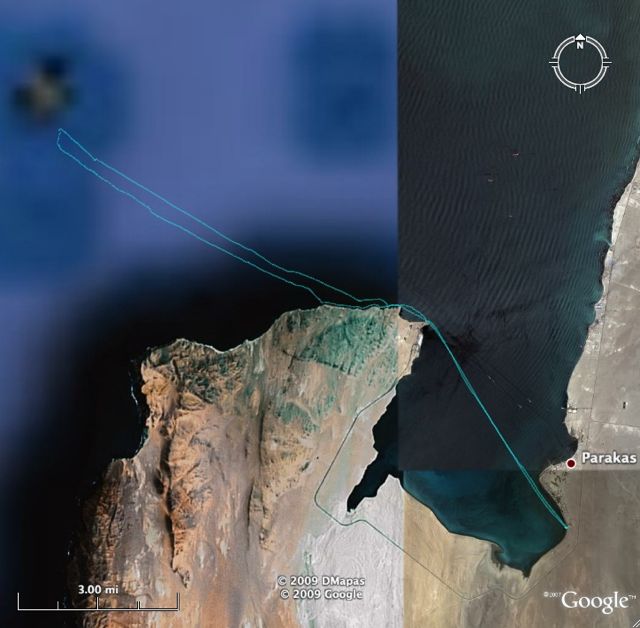 [Our GPS track from June 1, 2009: We started at the southeast corner of the Bay of Paracas, headed northwest to the tip of the peninsula, then crossed to the Islas Ballestas, and drifted slightly south on the return path.  22.9 nm]

My friend David has a boathouse full of cool toys: six brand new Epic kayaks, sailboards and kite boarding gear. His house is located on the Bay of Paracas which is sheltered from the ocean swell but is known for having a lot of wind, which typically comes from the south and picks up late in the day. It's not uncommon for the wind to blow up to 25-30 knots, so we planned to be off the water before late afternoon.

We launched at 0730 under an overcast sky, toward the guano islands, the Islas Ballestas. The sea was calm. We didn't have a weather report, a chart, or a even street map. There was no way to get information on swell size and no one had been following the trend in the barometric pressure. There's not much of a tidal range at 13 degrees south so we didn't worry about that either.

What we lacked in the usual essential data we tried to make up for in "local knowledge". After crossing the Bay of Paracas to the northeastern tip of the peninsula, David stopped to talk to some fisherman. We needed to ask for directions because it was so foggy offshore that you couldn't actually see the islands from where we were.

"I told them that we wanted to go to the Islas Ballestas," he said.

"They said we were crazy."

Earlier David had told us a story about a group of three Peruvians who had paddled out the the Islas Ballestas in two kayaks. Two paddlers were in a double sit-on-top and another was in a single decked sea kayak. The person in the single was apparently an experienced kayaker and decided to break away and paddle toward Islas Chincha to the northeast by himself. Conditions deteriorated in the afternoon as they typically do and the two kayakers in the double abandoned their attempt at the Islas Ballestas and returned home safely. But the kayaker in the single was found dead by fishermen the next day, still tethered to his kayak but missing his paddle.

The fishermen pointed us in the approximate direction and said it takes them about 45 minutes to get there in their boat, going about 5 knots. That didn't sound too far. 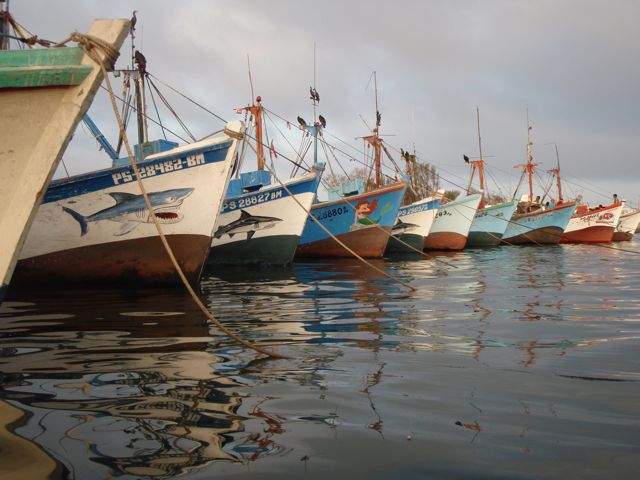 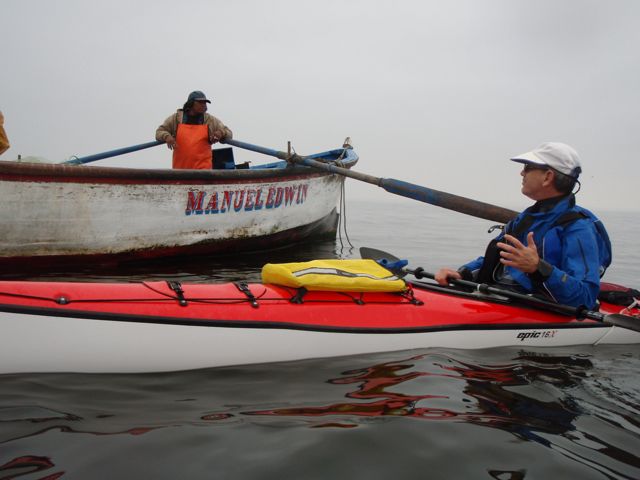 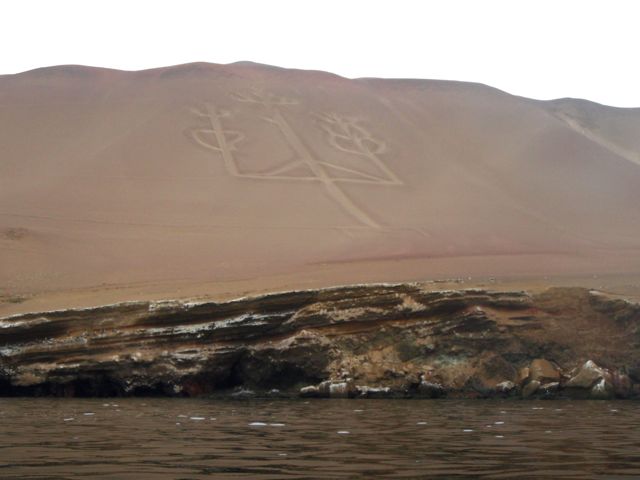 A number of tourist boats joined us at the northern shore of the peninsula by the Candelabro de Paracas, a famous geoglyph of mysterious origins. It was probably made a few hundred years ago as a landmark for sailors, unlike the Nazca lines which are far older. The symbolism may be Masonic. As the boats sped off to the Islas Ballestas I took a bearing on them with my handheld compass and we followed them into the fog. I also set a waypoint on my GPS. 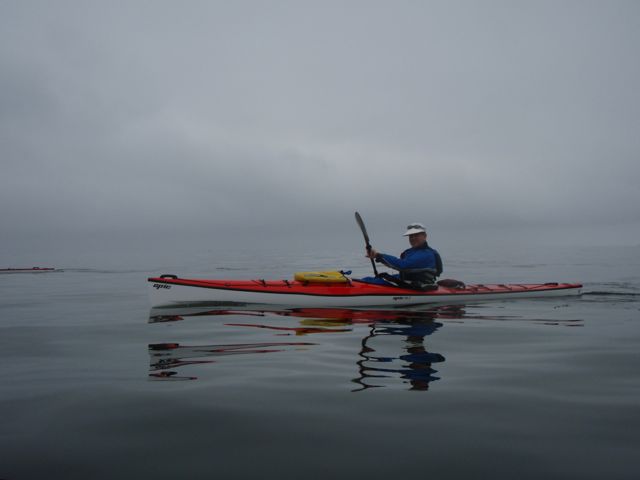 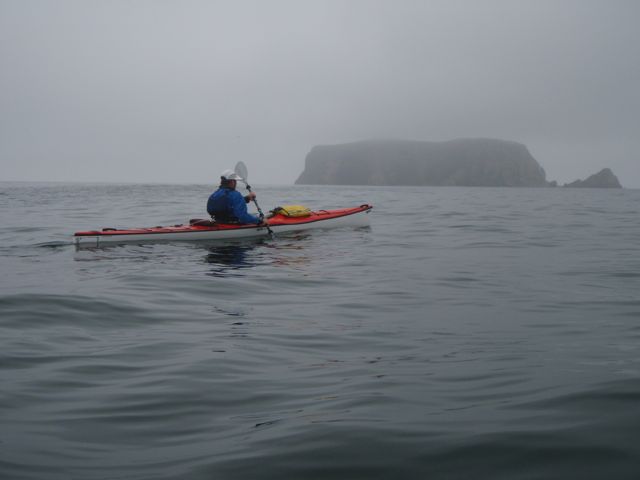 This close to the equator I expected to be paddling in much warmer conditions. It was the beginning of autumn in Peru and in the upper sixties -- cool enough to wear a drysuit with a thin base layer, much like the Pacific Northwest in the middle of summer and perfect sea kayaking weather.
Our heading was 280-300 (it depended a lot on whether my compass was lying level on my sprayskirt). My compadres questioned the heading because they thought the islands were somewhere southwest, not northwest. I honestly had no clue if it was correct: I was just following the tourist boats. Fortunately we were able to use other islands to the east and west as landmarks even though we lost sight of the mainland. After about 3 nm we were finally able to make out the faint outlines of the Islas Ballestas.
As we paddled closer the swell grew bigger but the sea remained otherwise calm. A group of penguins swam by. It was hard for me to judge the remaining distance to the islands because I had no sense of scale. In any case it sure seemed like we had paddled a lot farther than we expected.
We stopped at 11 nm and rafted together for lunch.  We were about 6 nm from where we left the fishermen, and I estimated within a mile of the islands. I could make out the steep cliffs, arches, and surrounding spires of rock, and see and hear the waves breaking on the shore. I wanted to see if I could find a small beach protected from the south swell. David advised against it. Again it was difficult to judge scale so I had no idea of how big the surf was. No one was allowed to land on the islands anyway, except those workers with permission to mine the guano. In fact, David recommended that we turn around and head back after paddling this far. He hadn't expected the trip to take as long as it did and it starting to get late. He thought the wind might pick up. It was difficult to for me to break away from the island. I wanted to get just close enough for some good pictures, and possibly land and stretch my legs, but in the end decided against it. David knew this sea better than I.
We followed our reciprocal heading back to the north shore of the peninsula.  We paddled along the cliffs among caves and sea arches. I was impressed by how totally lifeless the land is, in contrast to the richness of the ocean. Nothing grows here -- not one blade of grass or tuft of moss or lichen. 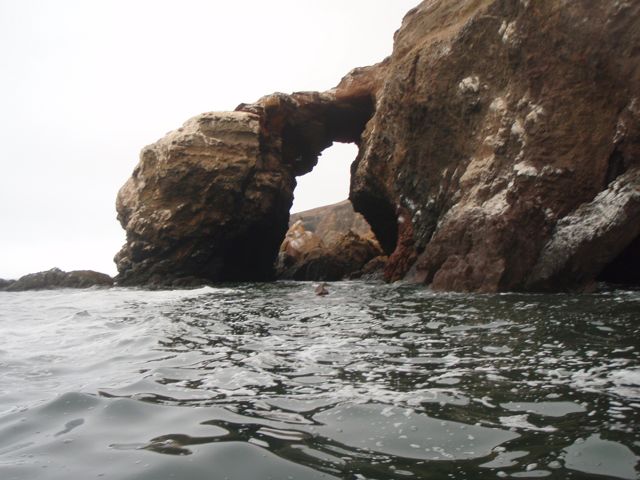 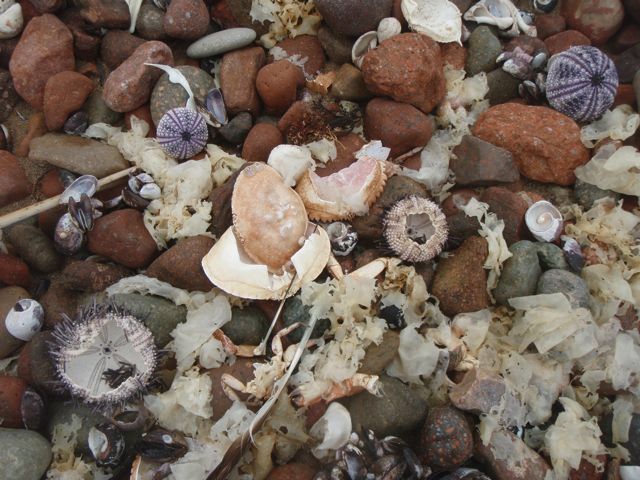 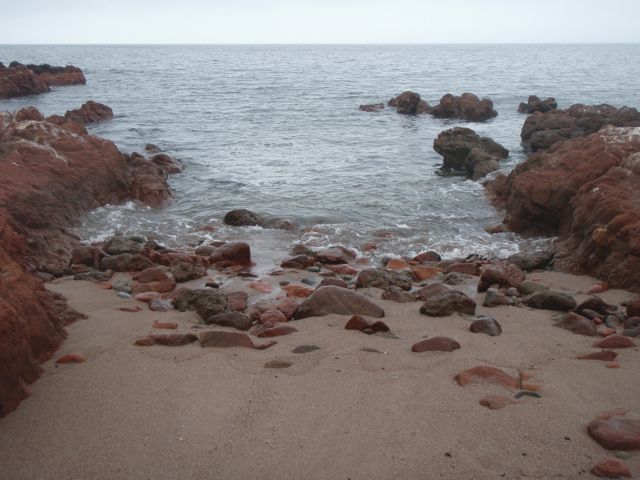 On my last day in Peru I had the chance to return to the Islas Ballestas, this time on one of the tour boats. There were thousands of birds, of course, lots of sea lions lounging on the rocks, and everywhere the strong smell of guano. The islands are riddled with huge arches and sea caves, the inside of which resembles interior of a cathedral. With a gentle swell and calm wind, this could be a sea kayaker's paradise! If I had known that it was this beautiful earlier, I would have spent the rest of the week trying to get out there again.

This is stunning! Thanks for sharing it, Andrew.

Hi Wenley! Yes it's pretty amazing. It's possible to leave from a beach on the northeast corner of the peninsula and cut the trip to the islands down to 7 nm. If I ever make it back there that's what I would do (and bring a helmet).

Thank you for the stuff, I am more than impressed, keep sharing amazing stuff like this.