David had hired a Peruvian guide named Juan Carlos to lead us on a trip around the Paracas peninsula. Juan Carlos had worked as a biologist and ranger in the National Park of Paracas for several years and had apparently also kayaked along the south coast before. Juan Carlos doesn’t speak English and I was the only one in our group who doesn't speak Spanish, so unfortunately I wasn’t able to talk to him at all about his previous kayak experiences.

We had anticipated having a total of 5 people in our group but our fifth man cancelled at the last minute. He happened to be one of the Peruvians who had been involved in the ill−fated trip to Islas Ballestas a few years earlier where one kayaker died (see my previous post about our attempt to paddle to Islas Ballestas).

We packed our kayaks and gear the night before in preparation to leave as early as possible the next day. We planned to drive south through the desert in the National Park and launch from a beach south of Paracas called Playa Mendieta, and from there paddle north to Lagunillas, a small fishing port on a protected bay within the National Park.  When we reached our put-in at Playa Mendieta I was happy to see that the surf was minimal so getting off the beach would be easy. 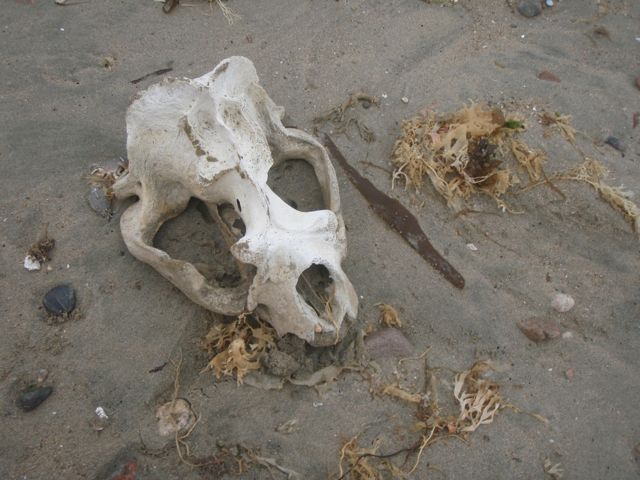 Dan launched first. He was wearing shorts and insisted on putting his neoprene booties on after he had gotten in his cockpit so that his feet would stay dry. I learned on our previous trip that he had this obsession with keeping his feet dry. I helped stabilize him while he got inside his boat and tried slipping his booties on. While he was an awkward position with one knee out of the cockpit a wave surged up and pushed us sideways, nearly knocking us over and flooding the cockpit with water and sand. So much for keeping his feet dry! After Dan scrambled out we emptied the cockpit and started over. 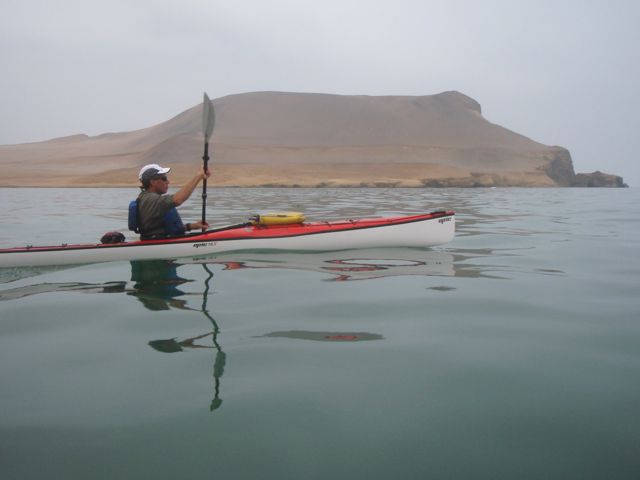 After Dan made it out through the small break, we started to help Juan Carlos. David introduced him to his kayak and adjusted his seat and foot peddles. Unfortunately, Juan Carlos arrived just before dinner the night before so he didn’t have a chance to try out any of the gear beforehand. He essentially got a a 5 minute crash course on the Epic 16X and coastal sea kayaking.

David pushed him out as the water surged in. Juan Carlos made it over a small wave but immediately capsized. David ran out and grabbed his kayak. I had my video camera on, but put it away to help empty the flooded kayak and another attempt at launch. Juan Carlos looked a little shaken. In a minute though he was ready to try it again -- a real trouper! He made it through the second time.

“My God,” David said. “Look at him! It’s like he has never been in a kayak before. There is no way he can do this. It’s too dangerous."

I reserved judgment for the moment but got a sinking feeling as I watched Juan Carlos paddle off. He was “arm paddling”, with short, choppy and sometimes hesitant strokes. The kayak veered off in random directions. He was obviously having trouble maintaining direction, even on totally flat water, and probably overcorrecting with the rudder. But all this time he was paddling with a big smile on his face, like he was having the time of his life!

David followed him out. Juan Carlos had just been fired! David was going to send him home with our support crew.

I waited onshore, thinking that if Juan Carlos is coming back I better stay to help bring him in. Some discussion occurred among the three of them on the water. After a few minutes I decided I should go out and find out what our plan was going to be.

In the end we let Juan Carlos come along. Although I agreed that having an inexperienced paddler along put everyone at additional risk, because of the sea conditions that day it turned out not to be a non-issue. The weather was perfect −− calm and overcast. We paddled passed rocks and sea stacks, keeping far from the big breaking waves close to shore and point breaks. 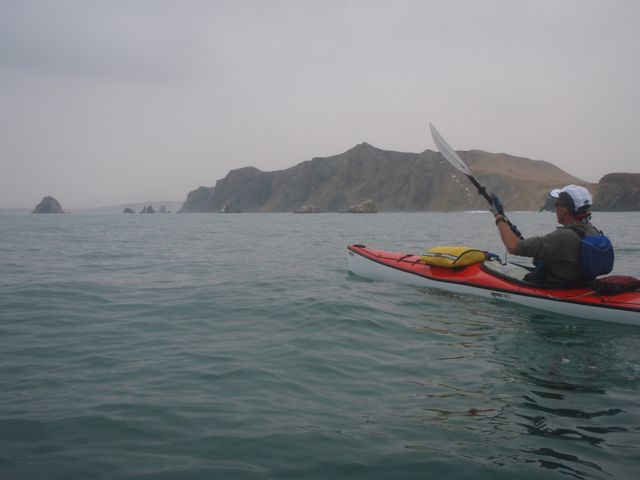 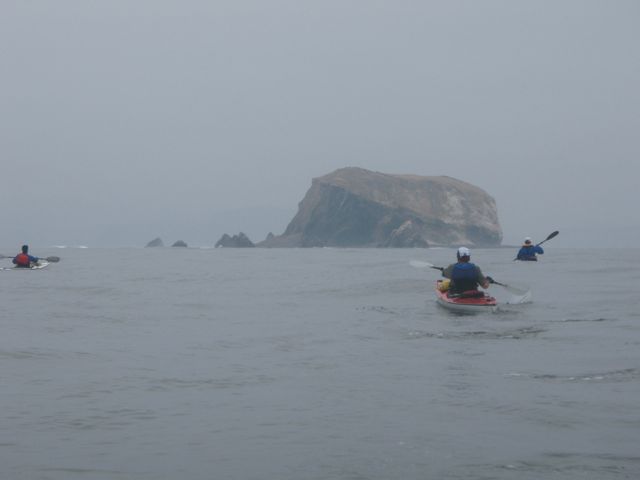 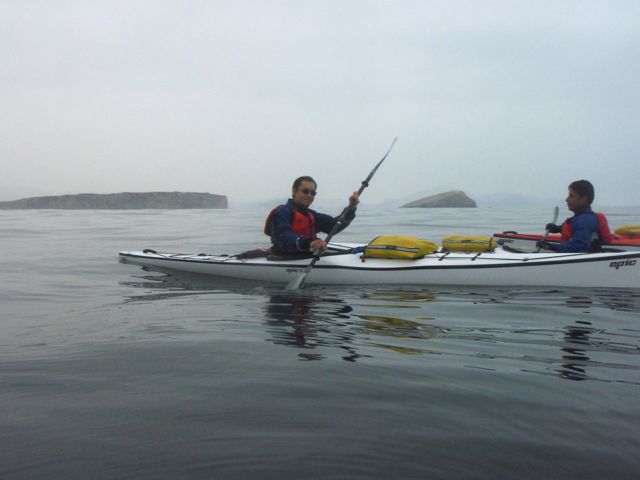 Juan Carlos lagged behind. David stayed close to him.  Dan and I moved closer to shore to get a better look at La Catedral, the remains of a huge sea arch. Two years ago an earthquake sent it crashing into the sea along with other large sections of cliffs along the coastline. A tsunami followed. The 3 meter surge destroyed many of the fishing boats and houses in Paracas as well as the historic Paracas Hotel. Incredibly, no one in Paracas died. For a year afterward the ocean was muddy brown. 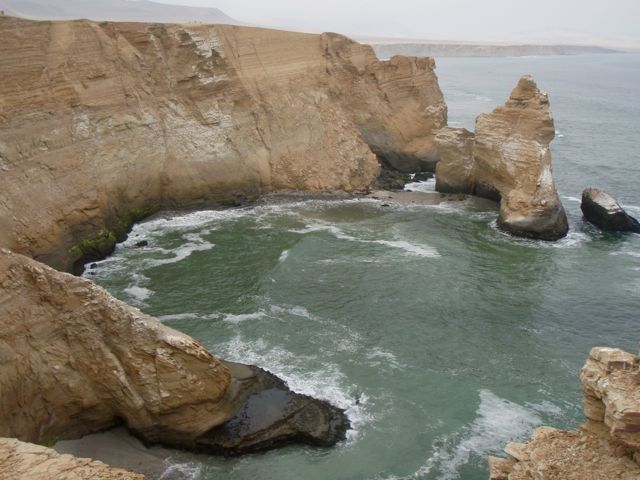 We ended the day midafternoon after paddling 11 nm in Lagunillas, riding the surge through a narrow slot in the rocks and onto the beach next to the Restaurant La Tia Fela. Our friends had gotten a table outside and were waiting with cold beers. La Tia Fela had no running water or electricity. Somehow they managed to serve busloads of tourists every day.  They presented you with a tray of fish fresh off the boats for you to select to have fried or prepared as ceviche (served raw and marinated in lime juice and sliced onion).