Out the Gate: Fort Baker to Point Diablo 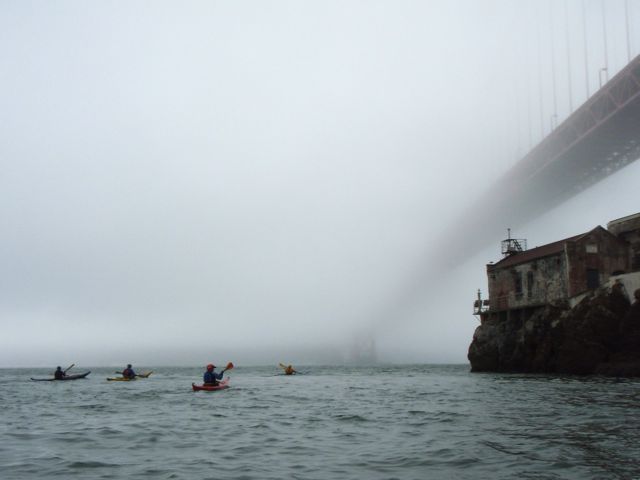 I recently spent a week in San Francisco sightseeing and paddling around the city. This trip came together when my parents offered to let me stay in their downtown condominium that they had been renting out but had just become vacant. I had planned on flying down to San Francisco and renting gear when I got there. When I asked Helen Wilson who lived in Arcata if she knew of any friends or outfitters I could get a kayak from, she said she would be happy to drive down from Arcata herself with a couple kayaks and join me. 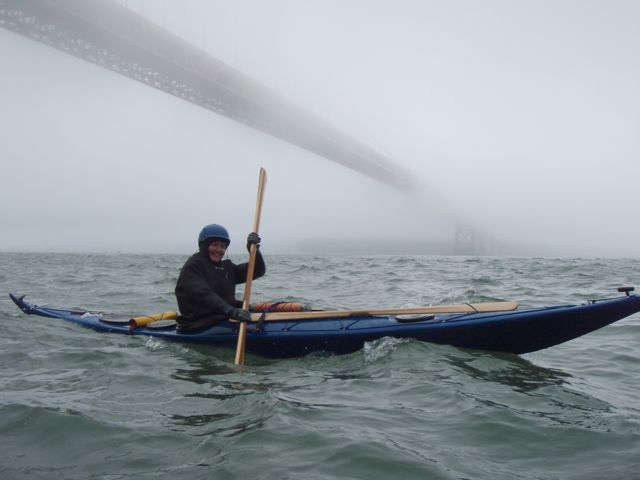 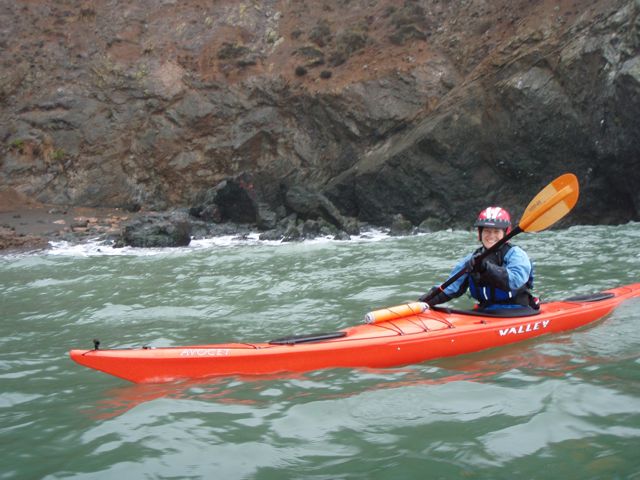 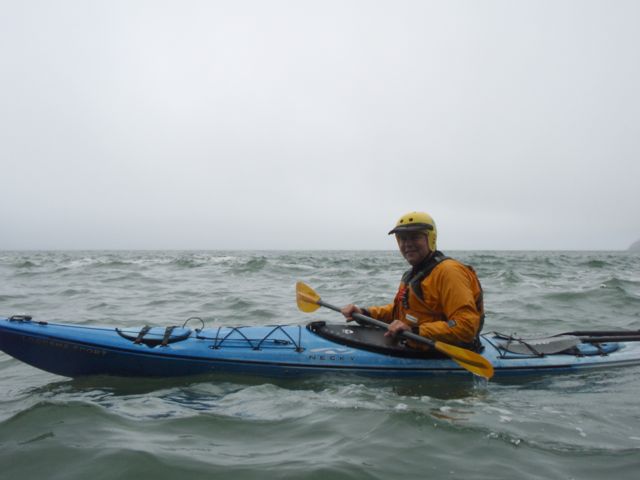 Helen arranged for us to meet with a few members of the Bay Area Sea Kayakers club for some coastal rock gardening just north of the Golden Gate Bridge. We met at Horseshoe Cove in Fort Baker, south of Sausalito. As we pulled into the parking lot by the boat launch, Kim, Don and Thomas were waiting for us, but hadn’t unloaded their kayaks because of the intermittent showers and lightning flashes. Instead we all drove into Fort Baker to try to find some coffee and wait until the thunderstorm passed.

The question of how long we needed to wait -- or if we should cancel the trip entirely -- came up, as we sat outside around a fire pit. The sky seemed to be clearing a little bit and I hadn’t heard any thunder for a while (wait a minute… was that a thunder clap, or just a car door slamming?)  My feeling was that it was probably safe to proceed. Plus I figured the bridge might act like a huge Faraday Cage, protecting us while we paddled underneath it, right?

I later found out that during an electrical storm, you aren’t safe anywhere outside. According to the National Weather Service, "There is little you can do to substantially reduce your risk if you are outside in a thunderstorm. The only completely safe action is to get inside a safe building or vehicle.” So what the hell were we doing sitting outside around a firepit? I recall being a 4 star BCU class on Neah Bay and waiting out a thunderstorm. Lighting was flashing very close by. We delayed launching our kayaks and instead sat on the beach and ate lunch. In retrospect we should have waited inside our cars.

For some interesting reading on lightning I recommend the National Weather Service Lightning Safety site. They say that you should stay inside at least until 30 minutes after you last hear the last clap of thunder. Is that the same as saying that it’s completely safe to come out after 30 minutes? Helen (who I would defer to regarding issues having to do with both weather and natural disasters) says that it’s actually not completely safe as long as the air is unstable, and one thunderstorm can be followed within hours by a second storm. 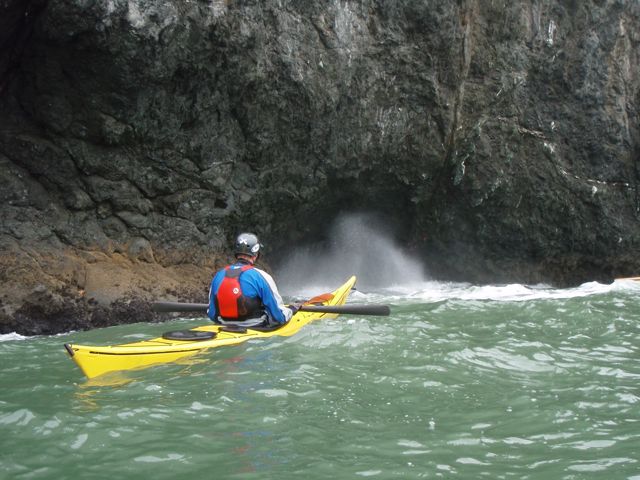 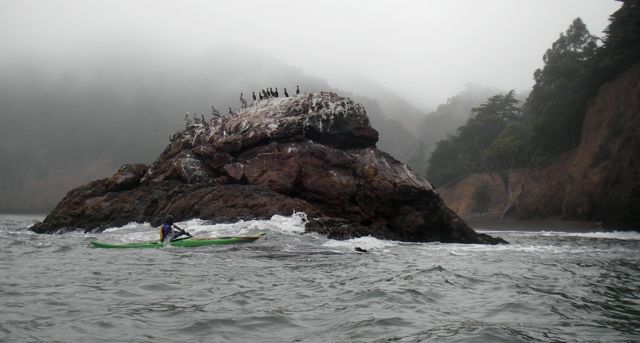 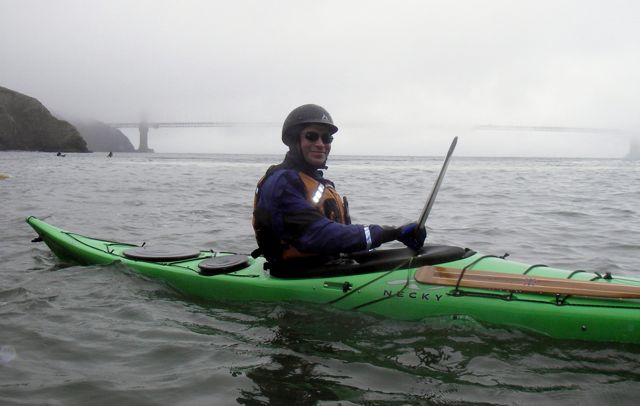 Paddling “Out the Gate” requires knowledge of tidal currents, which can be swift. Outside of the Gate, it starts to look like exposed open coast. The swell typically comes in from the northwest, so we were sheltered as we paddled along the northern shore. The occasional big swell made for some interesting moments among the caves, blowholes, and rock gardens. I think the swell period was long, around 13 seconds.

That’s me in Helen’s bright green Chatham 16. It’s great having a boat you can drag along a stony beach and float over sharp rocks. Plastic boats do have their place. 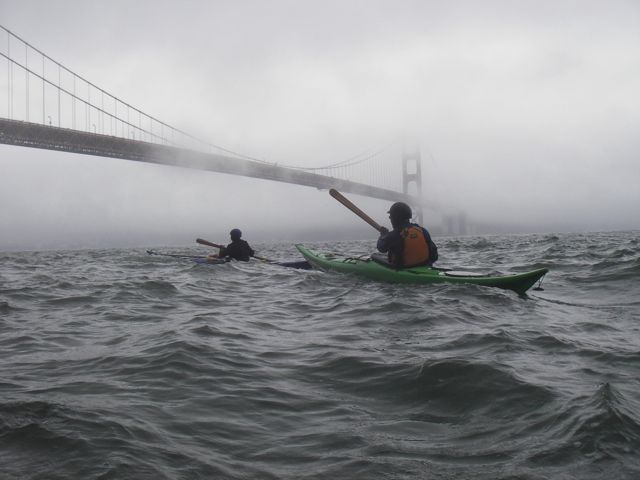