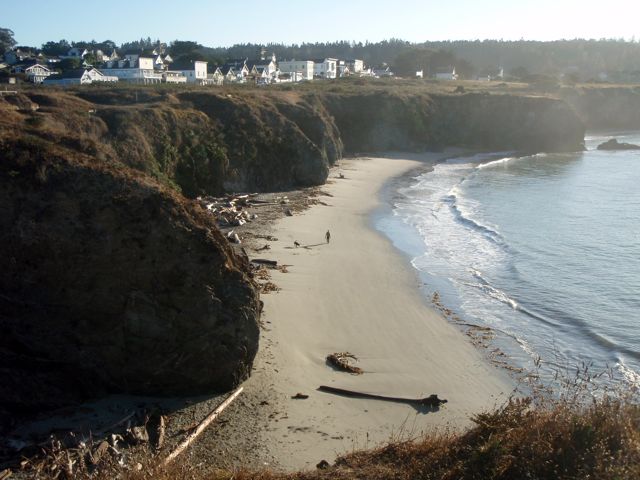 I rented a car in San Francisco and drove north about four hours to Mendocino. Helen Wilson drove down from Arcata to meet me there with her two kayaks. The coast at Mendo is stunningly beautiful, so dense with caves, tunnels and rock gardens that you could spend several hours exploring all the little nooks and crannies, then turn around to head back at the end of the day only to realize you’ve traveled just a couple miles along the shore.

Helen showed me a little guidebook published a few years ago by a local kayak club. It contained detailed descriptions of all the launch sites, beach features and hazards, and included details from nautical charts.

“Don’t spill coffee on it," she said. It was a very rare book loaned to her by a friend. Thumbing through it I saw that each route had a hand-drawn map of the shoreline, with notes on interesting features. I imagined touring this part of the coast over an entire week, a different beach every day. When I had finished I could start over at the beginning and see each place again at a different tide level. It would be like never paddling in the same place twice.

We parked at Van Damme beach, three miles south of Mendo. A small crowd had already gathered −− a mix of individual abalone divers and a group of sit-on-top kayakers getting ready to head off on a guided tour. 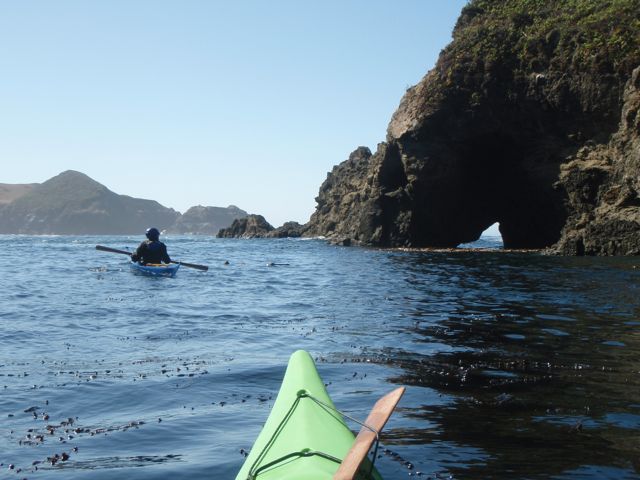 Earlier that day we talked about the basics of rock garden paddling over breakfast. Corncakes and coffee. Mimosas sparkling in the sun.

“So what do I need to know about rock garden paddling?” I asked. “Remember that you're talking to a total newbie.”

She said first of all you have to exercise some judgement about when to go. The best time is when the swell is small. Ideally around 2−3 feet. When the swell is too small to go surfing it can be the best time to play in rock gardens. There is still plenty of action around the rocks. Pay attention to the swell period as well. At the same swell height a longer period will give you waves with more water and energy behind them. Good conditions would be a swell around 2−3 feet and period less than 7 seconds, for instance.

As you paddle out, stay alert and anticipate how conditions and waves can change several minutes ahead. Plan a course through the rocks and stay on the lookout for optional routes. When you come to a cave or a slot or playspot, wait and watch it for a while. Five minutes. See what the largest sets are doing. You will occasionally see "set waves” that are much larger than the typical waves. It may happen only once every 20 minutes. A “monster wave” can appear only once every 3 hours. You have to be alert for them.

As far as caves go, make sure it’s big enough to roll inside before going in. Face the ocean and back into it. Avoid caves with low ceilings. If you’re in a cave and a big wave surges in, capsize to avoid getting pushed into the ceiling, which can be very dangerous. Then roll up when the waves has passed. If you are trapped between the ceiling and your kayak, the few hundred pounds of buoyancy in a kayak can crush your spine.

I felt like having another mimosa. On second thought, I figured I should stay sharp that morning. 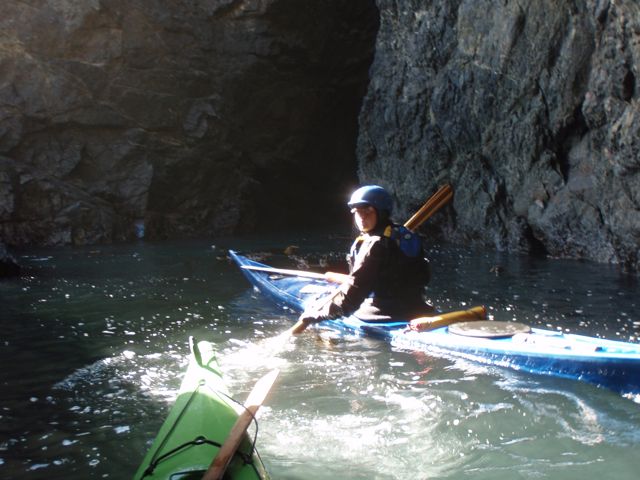 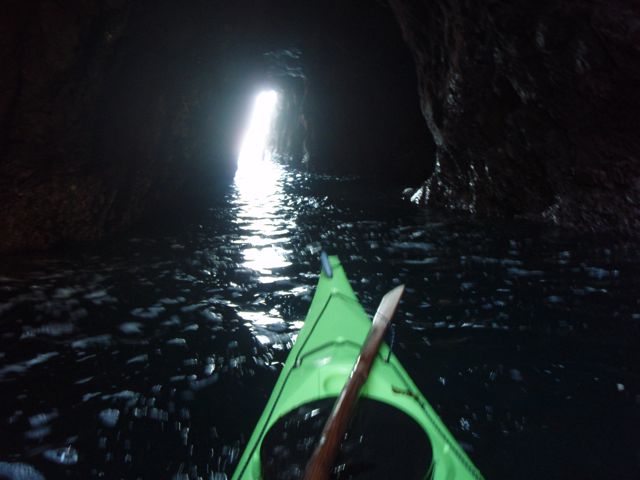 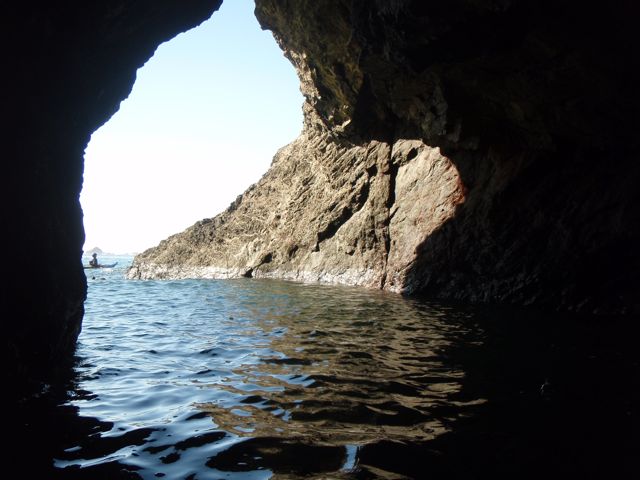 Once back in the green Chatham, I followed Helen out into the middle of the protected cove, over kelp forests and then north. Waves were breaking over the reef and around the headlands. Along the way we passed a cliff with a cave in it.

“How about that one?” I asked.

Ha ha -- silly me! People get all excited about little holes like that where I’m from!

She found a tunnel and led us into the cool and dark. Sunlight shone through the green water below. It led into a larger chamber where the ceiling opened up to the sky. A passage led around back toward the cove.  Opposite that, a longer tunnel led toward the ocean. It was as if this place was made for kayaks! We paddled on through, against the surge coming in from the exposed side. 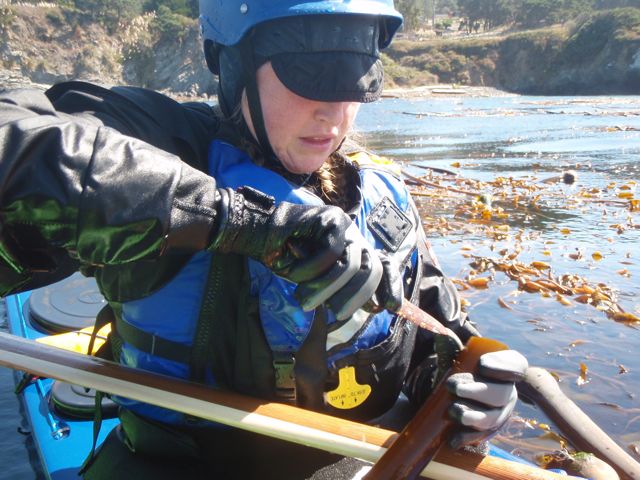 Once outside we headed back south, passed teams of abalone divers working off the sit−on−tops, and over forests of kelp.

“Let me borrow your knife", she said. “I’ll show you tricks you can do with kelp.” She sliced off of a length of kelp. Fashioned it into a horn. “Don’t breathe the gas inside. It’s carbon monoxide.” She put her lips to one end and blew, but it made only a weak hissing sound −− not quite as musical as she expected, I think.

“You can also cut it at the bulb like a funnel and make it into a Freshette.” (Clearly it's one of the tricks they teach in those “women only” kayak classes). 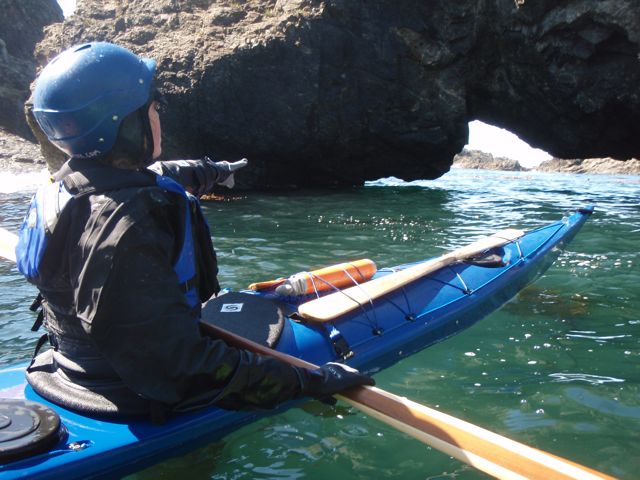 We paddled through narrow slots, and rode small surging waves around and over submerged rocks. I practiced timing the swell, and controlled my boat with a hanging draws while the surge pushed me through.

Helen told me another thing about caves and tunnels. The walls sometimes project outward above the water and are more open underwater. You can see this at low tide and sometimes when the water level changes with the surge. This can present a hazard if you capsize and are trying to roll up while being pushed against a wall. Your kayak can get caught under this rock shelf and you won’t be able to roll up.

Sometimes the wall can open up to an underwater chamber. If you capsize and are caught under the shelf, and then wet exit because you’re not able to able to roll up, you could get washed into this chamber and not be able to find your way out. Visibility underwater is poor. People have died this way, trapped under the rock, disoriented and in the dark. 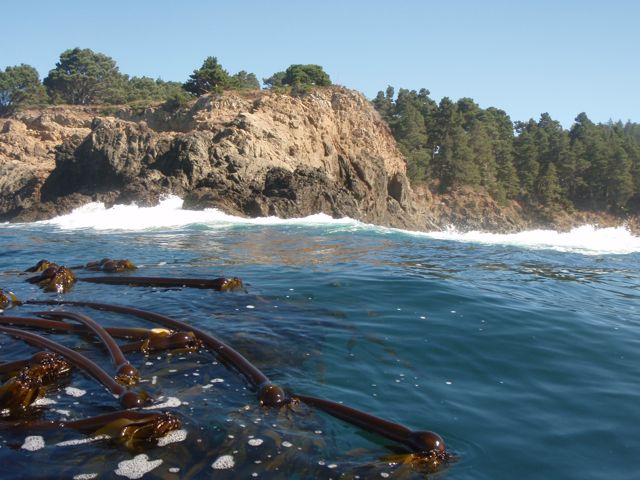 Helen found a long narrow slot that led to a playspot behind some rocks. She watched it for several minutes, sizing it up. I waited as she paddled through. Once she was out of sight I started to head through myself, but I hesitated. Just then a huge set wave washed in. Suddenly the slot was all chaos and whitewater −− a roiling cauldron. I backed out quickly, and thanked God I didn’t follow her through! I met her as she exited the other side, a big smile on her face.

“Did you hear me yelling at you not to go through, after that wave came in?’ she said.

Back on the beach we met up with some abalone divers. California is unique in that there has been a moratorium on commercial harvesting of abalone for more than 50 years. This has resulted in the densest population of abalone in the world, open only to recreational harvesters. All harvesting is all done by freediving −− no SCUBA is allowed. It’s quite a skill to be able to harvest in that challenging exposed coastal environment.

We asked to see their catch and they showed us. The shell was covered with marine growth. Underwater it would be difficult to distinguish the abalone from the rocks. Divers look for the characteristic black border of the foot. They turned it over to show us the underside. It had a huge fleshy foot, 7 or 8 inches across. A very impressive sea snail! 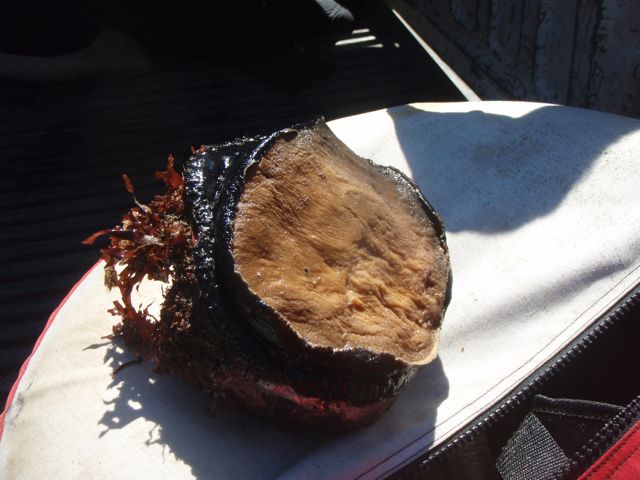 Very interesting reading! Thanks for sharing.

The whole experience looks fantastically good. I myself am well into kayaking and canoeing and love the great outdoors, there is nothing better than experiencing the world and its waterways, this way.

There are some great waterways throughout the world to experience, and how better to enjoy them, than on your own in your own canoe. It is important to remember to do your homework prior to riding the rivers, plus it is really important to work out whereabouts the white water rafting parts are in order that you are prepared for all eventualities.