Thanks to David Tiller for taking this video. He froze his butt off standing on the Deception Pass bridge to get these shots. I love photography and sometimes it kills me that I can't be several places at once -- competing in the race plus covering it from several locations and angles, and taking stills. Unfortunately because of dead batteries and other last-minute technical difficulties I don't have any on-the-water shots this year, unlike last year. The water wasn't that exciting anyway. (By the way, did anyone happen to find the little Sticky Pod suction cup camera mount I lost on the beach?  Let me know.)

Highlights from the 2009 Deception Pass Dash 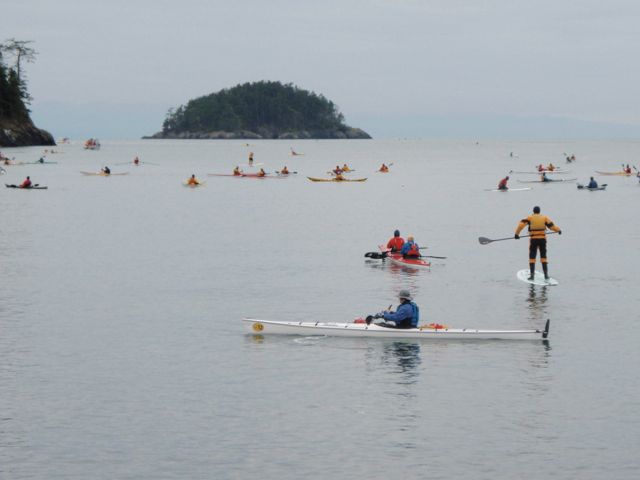 A huge crowd showed up for the 4th Annual Deception Pass Dash this year -- 158 paddlers! Conditions were totally calm. No wind. There wasn’t much current to deal with going through the Pass either, even though the max ebb later in the day was predicted at −7.3 knots. 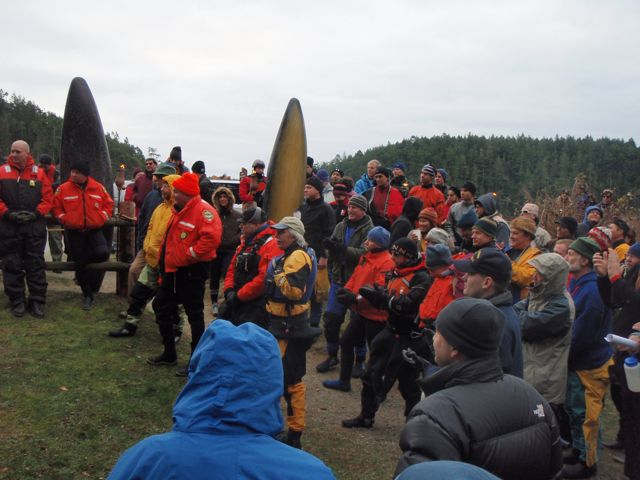 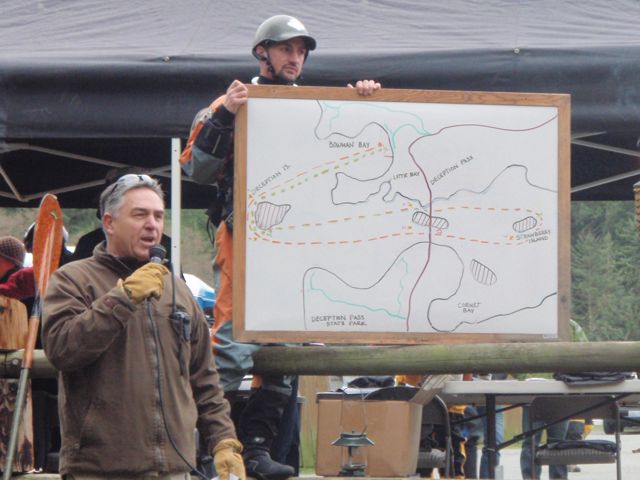 I finished with my best time ever: 62 min 47 sec for the 6 nm course! The secret is my Epic 18X Ultra kayak and wing paddle combination. Conditioning helps, obviously. I guess all that training I did over the past year did some good after all. I also had to get used to using a feathered wing blade after using a Greenland paddle exclusively for years. 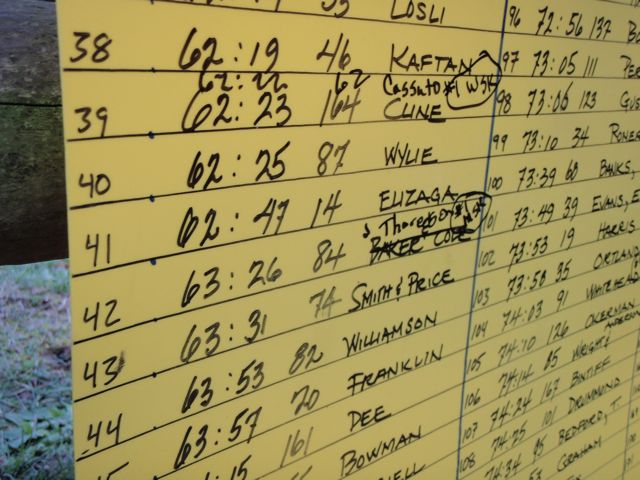 The trick for me in the race was to find someone just a little faster than me to draft behind. I played that game from the very beginning. When you have it tuned just right you just glide behind the person in front of you with little effort. The challenge is keeping on course. It’s natural to focus your attention on their stern the whole time but I think it's better to watch their bow because it will give you a better idea of which direction they are headed. Sometimes they'll try to suddenly speed ahead and shake you off. Other times they’ll just stop to take their hat or gloves off and you have to swerve to keep from crashing into them. 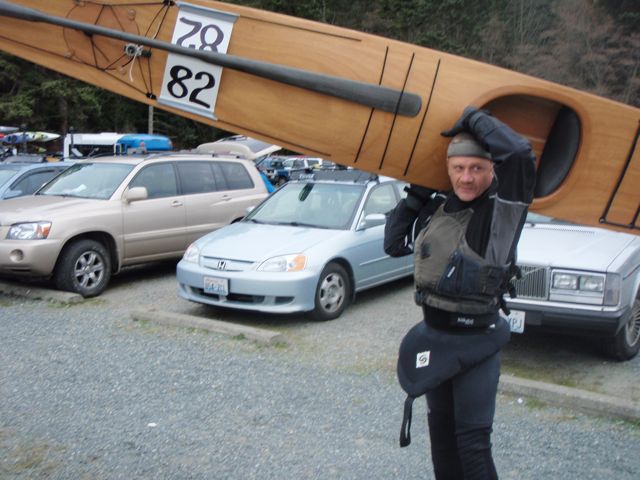 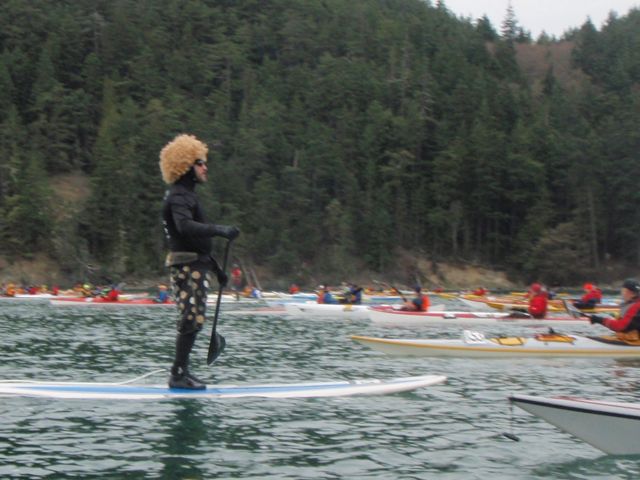 Check out the stand up paddle board dude with the big hair! A couple guys who completed the race soon after I did had been kneeling on their boards and using their hands the whole time. Impressive, sure, but if you aren't using a paddle does it really qualify as a “paddlesport”? 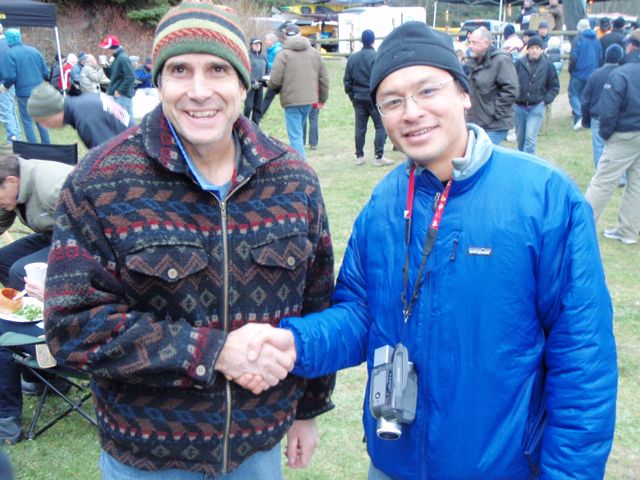 I got to meet President of Epic Kayaks, Greg Barton. He finished in 46 min 24 sec and won the race. Of course I gushed all about how much I love my Epic. He told me that the long awaited new Epic Track Master Plus steering system with the pivoting stern and deployable secondary rudder will be available very soon, maybe in a couple weeks! I can’t wait to get the kit and retrofit my kayak with it. When I was out a week ago paddling off of Point Defiance in some rough water with the Kayak Academy crowd, George Gronseth said that my rudder was out of the water much of the time. 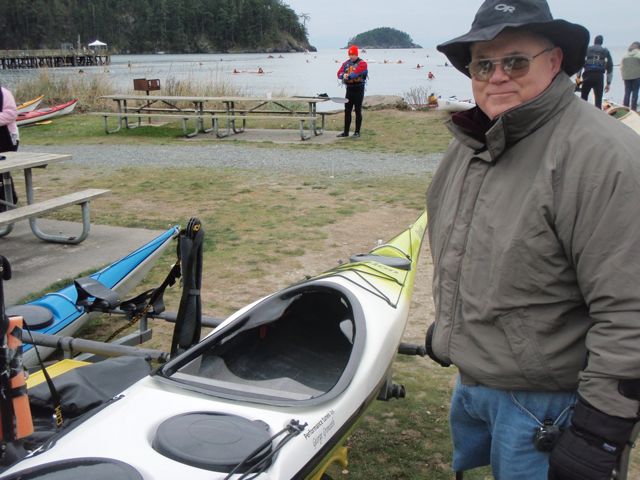 Sterling Donalson was there showing off his latest Illusion design. Sterling lowered the deck behind the cockpit to make layback rolls easier. It makes a ridiculously easy to roll kayak even easier. He also located the skeg right behind the cockpit. The skeg box sits to the left of the day hatch compartment. The bulkhead separating the day hatch compartment from the aft compartment is actually “L”− shaped. It’s a beautiful design. 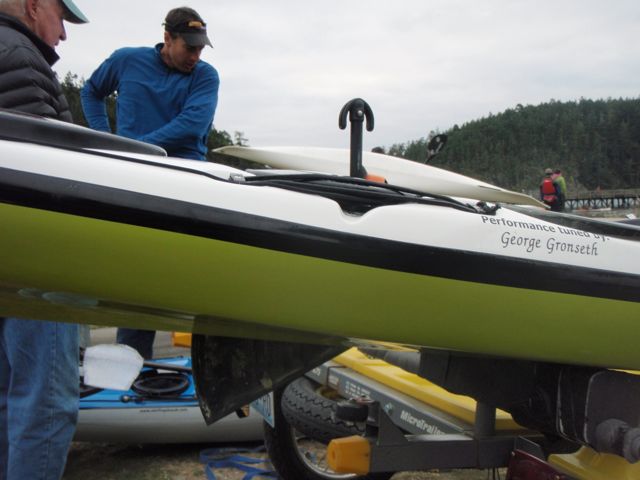