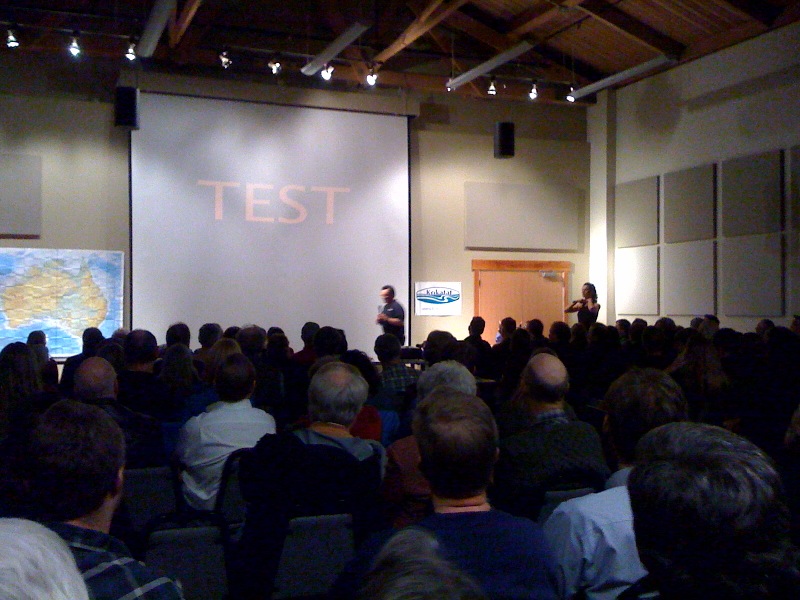 The new Seattle Mountaineers headquarters in Magnuson Park is a beautiful facility which features airy conference and lecture rooms with large windows, high ceilings, and indoor climbing walls. The lobby has a stone fireplace surrounded by leather couches and a library/bookstore on the side. The only thing missing is a bar where crusty old adventurers sit and recount tall tales of their past expeditions.

Freya Hoffmeister greets people at the entrance to the lecture hall, wearing a black dress and high heels. She stands statuesque -- hard, toned, deeply tanned, skin tight over her high cheekbones. She towers over me and gives me a warm welcome. I think she remembers me! So what will she do now after having finished the ultimate sea kayak journey--the circumnavigation of the continent of Australia? Get through this talk, she says!

Sponsors are giving away lots of swag. I grab a Kayak Academy sticker− the nice ones printed on SOLAS reflective tape. George Gronseth shows me the medals that they will be giving out as prizes for the 2010 Greenland Week competition in November. A silver norsaq! 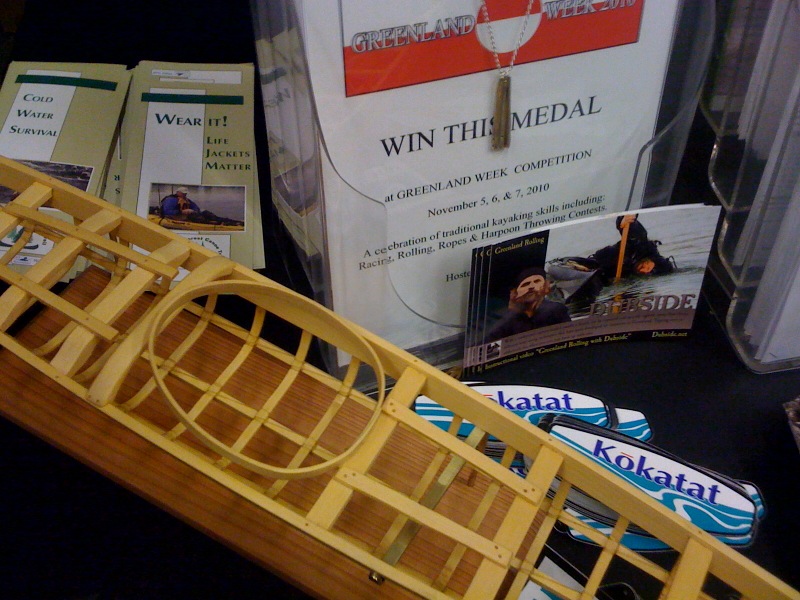 There's a table covered with posters and postcards of Freya. I pick one up, then realized later that I should to get her to sign it. They tell me signing will come after the slideshow.

I run into Kayakgrrl in the beer line. She asks me if I'm still interested in volunteering for SSTIKS. Of course, I am! By the way, did you hear that the Puget Sound Sea Kayak Symposium and West Coast Sea Kayak Symposium have been cancelled this year? It's the economy. Yet SSTIKS keeps soldiering on!

We need to get our picture with Freya and go back in line. Chris Cunningham takes it with my iPhone. Damn, I forgot to bring a real camera! 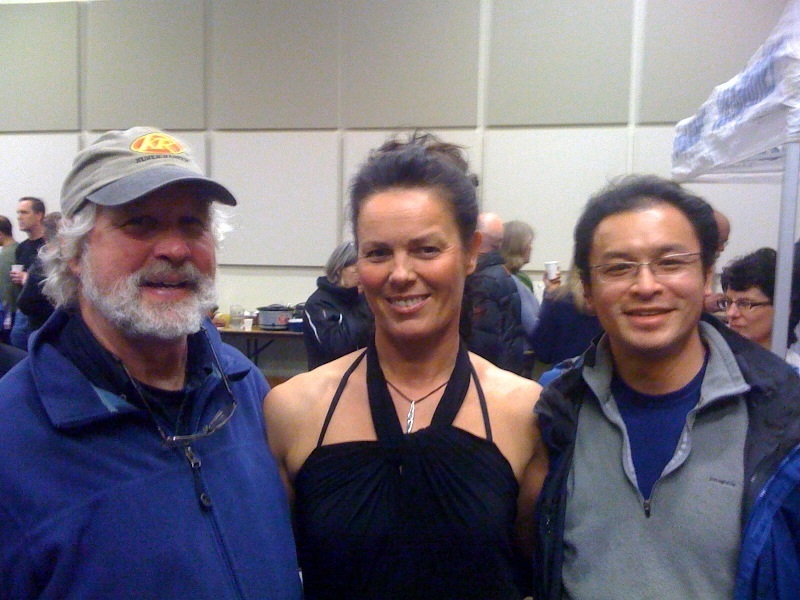 They have Freya's Epic 18x Sport up in front. Funny, it looks like it's in perfect condition. Turns out its not the real boat, just a model. Her real Epic wing paddle is there though, the finish dulled but otherwise in good condition. It lasted the entire trip. 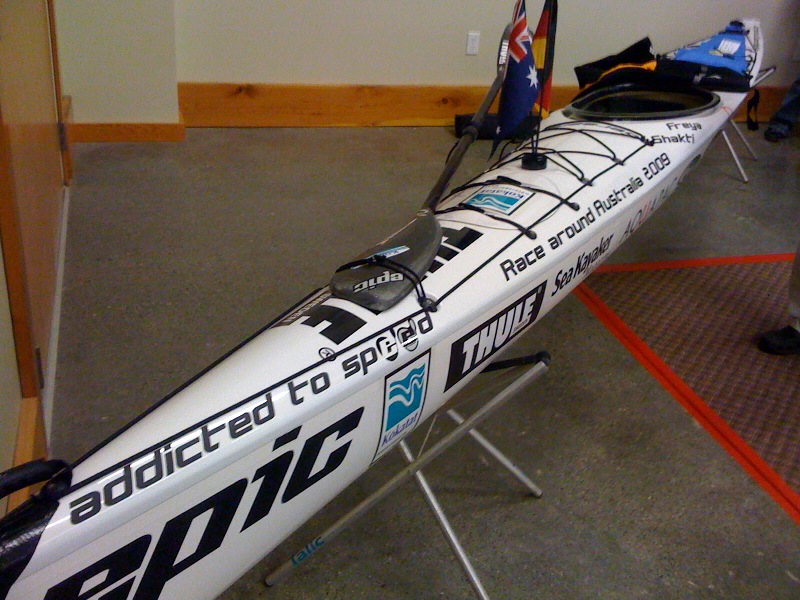 The lights go down and the show starts. Chris Cunningham gives the intro. Freya comes on and says this is a big talk for her. She knows about 50 people here personally. Another few minutes thanking her sponsors. Some of the text on her slides is cut off at the bottom. The aspect ratio is wrong . She says it makes her look fat and blames the Mac Powerbook. Laughs from the audience. Freya is a PC!

Slideshow continues. Packing her food. Cutting out coastal maps. The big pile of electronics she brings (but no iPod). Fantastic photos of wildlife. Islands of the Great Barrier Reef. Flip flops of all sizes littering the sand -- probably floated in from Asia. The flying fish that flew into her face. An enormous sunfish stranded on the beach. A whale stuck on a reef. The gouge in the hull of the Epic after it struck a reef at night. She's sitting in what looks like a big driftwood stump but its actually a whale bone. Venomous sea snakes. A horde of little sea turtle babies. A six meter long crocodile.

Suddenly the picture is gone and the Mac desktop appears: "The application has quit unexpectedly." They restart and try again, but can't figure out how to jump to the last slide we viewed. Freya apologizes as she fast forwards through the show again. Finally we’re back where we left off. More about crocodiles and turtles. Next slide. The application quits again! Groans from the audience. Freya curses the Mac. Good time for a break she says. By the way there is still more beer in back. I get up and accidentally knock my beer on the floor. 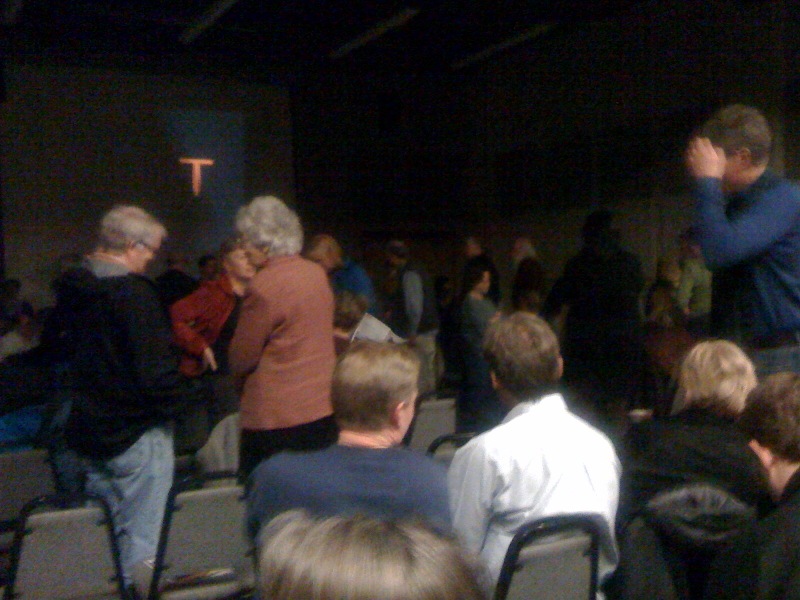 The slideshow continues. She tells us how she slept during the crossing of the Gulf of Carpentaria. Seven days on the water. A picture of her sitting in the cockpit, reclining with padding to raise the seat, a PFD and rolled up mattress pad behind her back and a bag of clothes for a pillow. Her paddle strapped to the back deck acted as an outrigger, with float bags tied to the blades. She would drift in the right direction because of the southeasterlies. The GPS would navigate for her. When it got rough she deployed a sea anchor. She worried about being bitten by venous sea snakes, but got quality sleep. She explains what she ate, how she peed, and how she took a dump. She tells it all!

Pictures of the hole a shark made by biting in her stern. Her back compartment leaked, soaked her tent and ruined some food. Pictures of her custom Epic with the Trackmaster Plus rudder and retractable skeg. It arrived halfway through the trip. She thinks the noise from the loose rudder knocking around kept the sharks away.

Three stretches of coastal cliffs with nowhere to land, over 100 miles each. More rough nights on the water. Then the slideshow winds down. 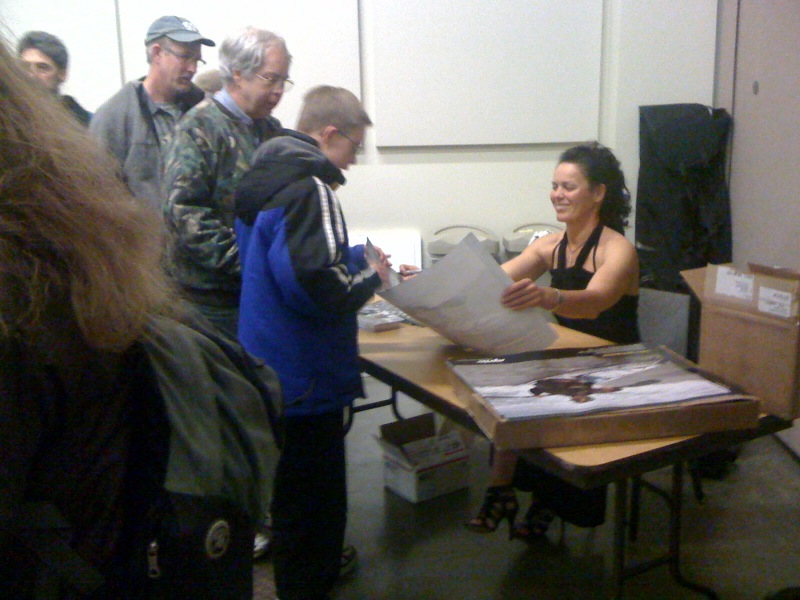 Long applause. Questions. Do you practice yoga? What did you think of out there -- to keep your mind occupied?  She says it's just like any other boring job. What do you think of every day at work, for instance? (Personally I think a lot about sea kayaking!)

Then door prizes − get out your tickets! George Gronseth hands out a lot of gear. Greg Barton gives away Epic hats.

"After the show there will be poster signing in back with Freya". The line forms and gets longer by the second. I can’t stay late so I pick up a copy of the pre−signed Sea Kayaker issue with Freya on the cover: “xx, Freya”. 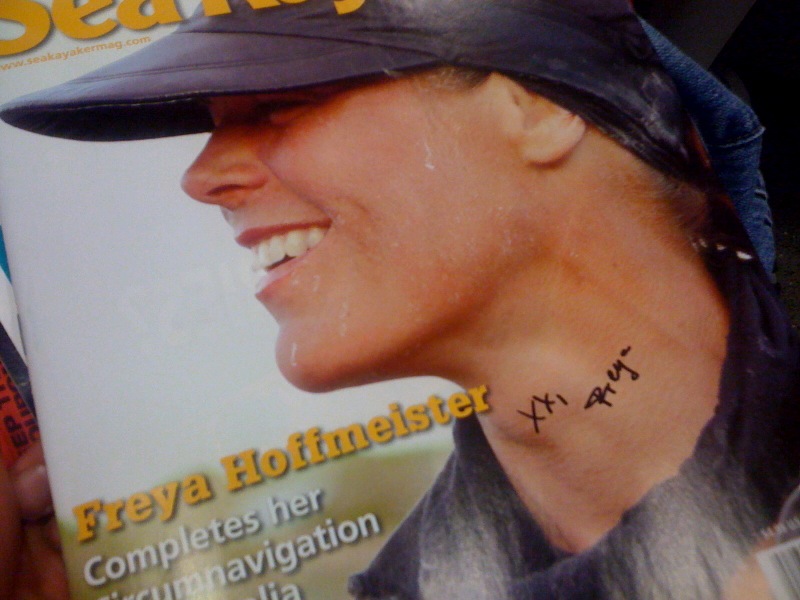