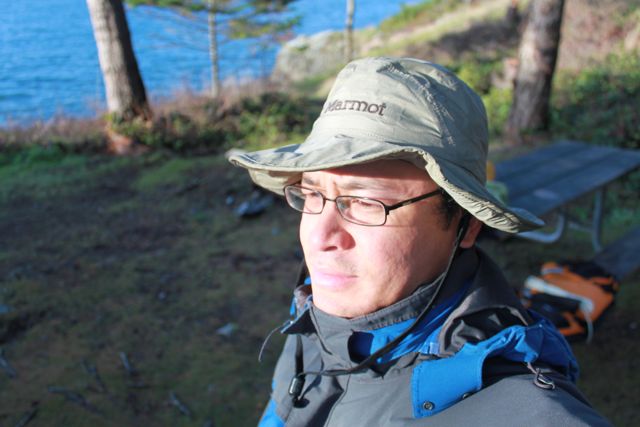 This was a spur of the moment trip. I hadn’t put a lot of effort planning around the tides and currents. I didn’t want to do a lot of sightseeing but just pull off a quick and dirty circumnavigation instead. The marine weather forecast sounded a little unpleasant −− mostly wind and rain. But if you wait for perfect conditions in the winter around here you will never go anywhere. The point is to be flexible. Listen to the forecast but see what it’s like for yourself and have a back−up plans and escape routes.

I hadn’t been camping in a while so it took me about 4 hours to sort through all my gear and get packed. My tent suffered from a touch of mildew but was otherwise OK. I had to throw out my Garmin GPS which had corroded and was beyond salvage. My knife was hopelessly rusted out too, but I found a spare. I gathered together 3 used Isopro canisters, but were they full enough? I didn’t have a tide and current table so I collected all the data I needed off the NOAA website and jotted it all down in a waterproof notebook.

Fortunately the currents were weak. One thing I don’t enjoy is keeping a tight schedule, breaking camp before sun rise and having to reach a certain destination before the current changes. Weak currents give you the flexibility of sleeping in, taking your time, and going any direction, even against the current.

I left my car in the lot in Washington Park in Anacortes and loaded my kayak on the deserted beach. No room for my kayak wheels −− so no possibility of taking the Friday Harbor Ferry as an escape route. No room for extra immersion wear, a real luxury anyway. I would be fine as long as my old drysuit gaskets hold up. Damn, I forgot to bring duct tape!

I left a little later than I expected, around 1300. The ebb had just started in Rosario Strait, and would reach a max of −2.5 knots at 1606 at Peapod Rocks. But I enjoyed a strong southerly tailwind, so I didn’t notice much of a current against me all the way up to Doe Island. Distance about 10.3 nm.

I found the Cascadia Marine Trail campsite at Doe Island along a small rocky beach. A path had been cleared of rocks in the water for kayaks −− a nice touch. There was a campsite on the point close to the beach with a gorgeous view of the Strait but I chose one further in the trees because a Small Craft Advisory had been posted for the night and it was going to be breezy. Twelve dollars a night: put the cash in the paybox. 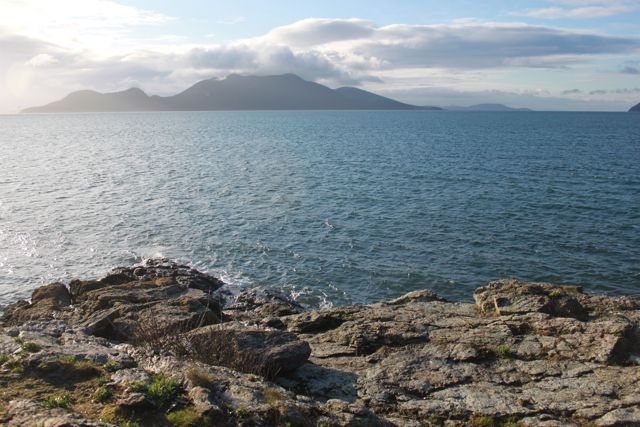 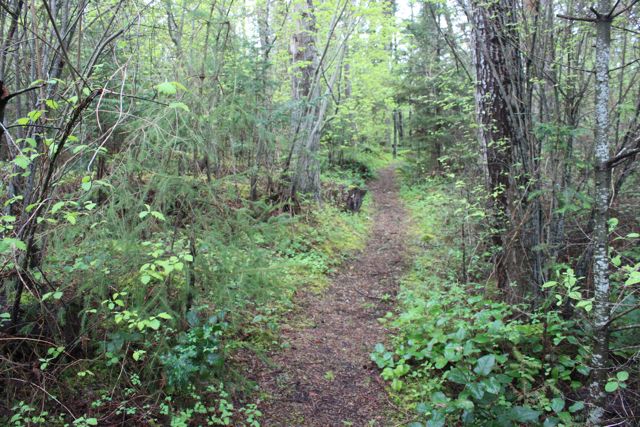 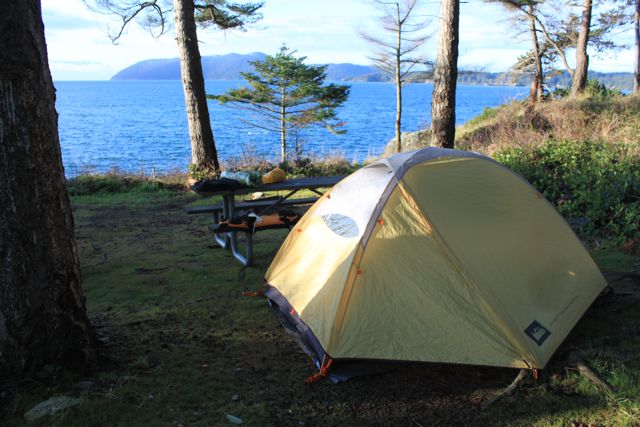 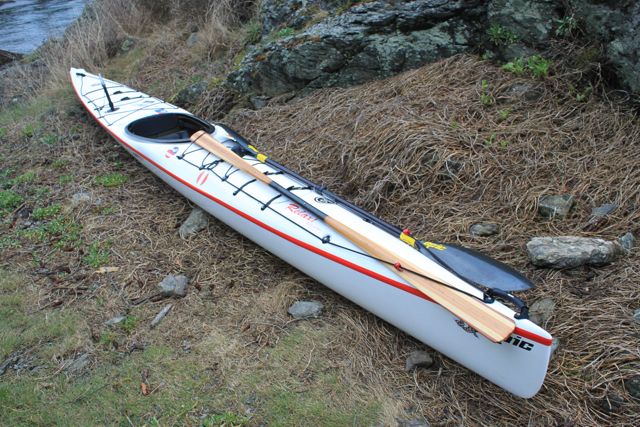 I brought along a big tarp as well as my tent. It’s great to have when it’s raining because it extends your dry living space outside of your tent. It’s not as nice to have when it’s windy though because it will flap like crazy and might even break loose in the middle of the night and force you to get out of your warm sleeping bag to cinch it down tight again. I learned my lesson that night. I even went to check on my kayak to make sure it hadn’t blown away. The wind was that bad. You have to be especially careful with those ultra lightweight kayaks. From now on I’ll always tie my boat down so I don’t lose sleep over losing it to the wind or tide. Yes, that’s an Epic wing paddle as well as a wooden Greenland paddle on my deck. I use them both to mix things up a bit. 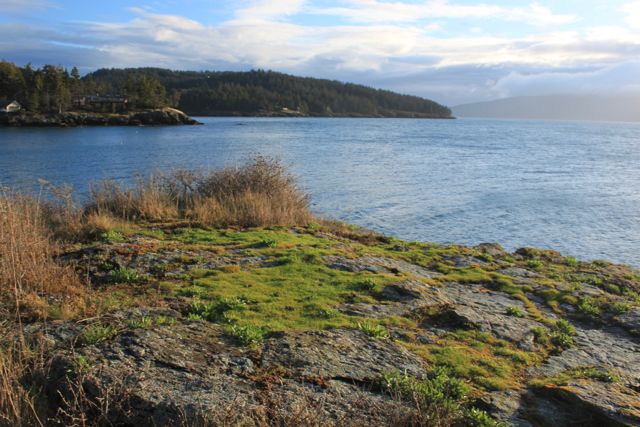 The wind was still blowing in the morning but it was going in my direction and the water looked fine. It pushed me quickly all the way up to Point Lawrence, where I turned westward in the lee of Orcas. By the way, if you have time be sure to stop at the funky Doe Bay Resort just north of Doe Island. They are home to the famous clothing−optional outdoor hot tubs and a great café serving fair trade/locally grown/organic food. I would usually drop in but really wanted to put some miles behind me.

Tall cliffs make up the undeveloped northeast shore of Orcas. Along the way you pass the outer islands, Clark, Barnes, Matia, and Sucia. Clark, Matia and Sucia have campsites and are possible stops along the way. With its unusual sandstone rock formations and hiking trails, Sucia is a destination unto itself. 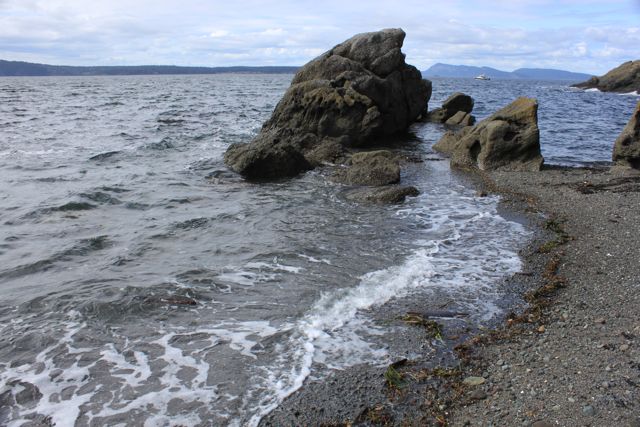 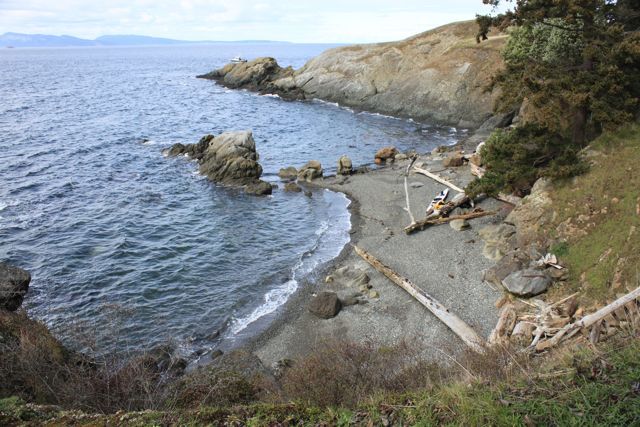 I didn’t stop until I got to Point Doughty on the northwestern tip of Orcas. Once I rounded the point I got a little blast of the south wind again. The park has a small rocky beach exposed to the south. The only way to reach this park is by water. The rocks keep out the big boats. A steep staircase leads up to the Cascadia Marine Trail campsites high above the beach. I originally thought I would stop here for the night, but stayed for a long lunch instead. The forecast called for the wind to pick up on Sunday, and I wanted travel as far as I could today so I could be done before then. I paddled south another 7.5 nm to Jones Island before setting up camp.

By the way if you plan on doing any kayak camping around Puget Sound or the San Juans and don’t have the Cascadia Marine Trail Guidebook yet I highly recommend joining the Washington Water Trails Association and getting one. Be warned though that it does not list all of the campsites available. It says nothing about the campsites on the outer islands, for instance. 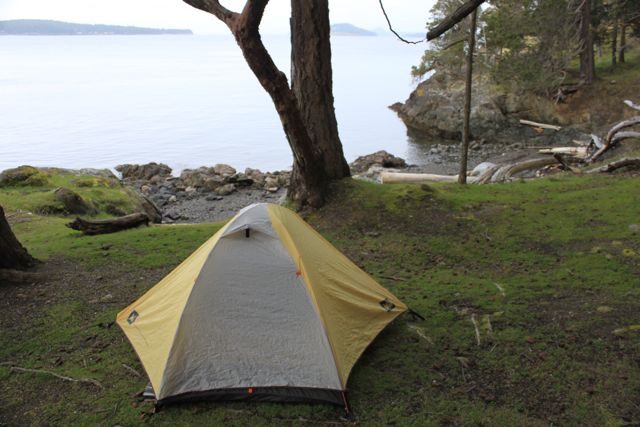 I was very tired by the time I got to Jones. I had paddled about 20 nm. Fortunately I found the campsite quickly. I had been paddling against the wind and had also gotten a little chilled. There was a pile of firewood next to the firepit that seemed dry enough but I figured it was too much effort to make a fire. My priories were hot tea, dinner, and then lots of sleep! Oh yeah, I also had to hike around the island to find the paybox and drop off my $12. I think it was only about 6 PM but I had slept poorly the night before.

In my experience, you can paddle all over the San Juans in the winter and not run into another kayaker. In fact, I didn’t see another person the whole time, except an occasional a passing fisherman. It’s great if you want privacy and your choice of campsites. Unfortunately there wasn’t not a lot of wildlife around either, just a porpoise and a few seals.

Apparently the hike around Jones Island is very nice but I wouldn’t know because after sleeping what seemed like 12 hours I broke camp and packed up to go. It was a calm, pleasant night. 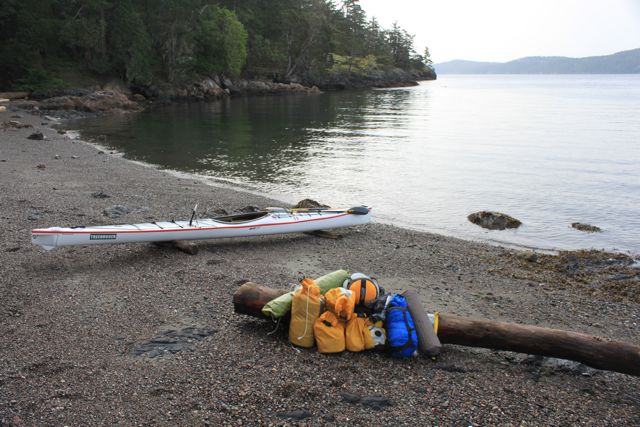 By the way, I figured out a way to land and launch my fully loaded kayak easily by myself while minimizing scratches to the hull and damage to the rudder (and to my back). While landing I’ll pull my kayak up to shore as far as possible until the stern starts digging into the sand. Then I’ll find a small driftwood log and kick it under the bow. With the driftwood in the place I can either pull or push the kayak up the shore further. Usually it will slide over the log but sometimes the log itself will roll up the beach with it. By repeating the process with another log I can move a fully loaded kayak by myself as far up the beach as I need to.

My plan was to make my way east through Wasp Passage at slack. A great stop in the Wasp Islands is Yellow Island, a Nature Conservancy preserve. If you're lucky you might even get a tour from the island caretaker who lives there year−round. If you need to resupply, take a hot shower, pick up an espresso or even do your laundry, it’s a short paddle up north to the marina at Deer Harbor.

The wind was channeling from the northeast though Wasp and Harney Passage, so it was a bit of a slog all the way east to Obstruction Pass. I stopped for lunch at one of the campsites on Blind Island just south of the Orcas ferry terminal. It is known for having great views of the ferries coming and going to Orcas and Shaw Islands, especially at night. I had also planned to stop at Obstruction Pass State Park but was off a few degrees on my navigation and ended up at the entrance to Peavine Pass instead. I didn’t want to make the extra effort to head north. If you do go that way there is a little resort called Lieber Haven were you can pick up supplies and see the 72 ft schooner Lieber Schwan. Once I was through Peavine Pass I was done with the circumnavigation. Distance from Jones Island about 10 nm. 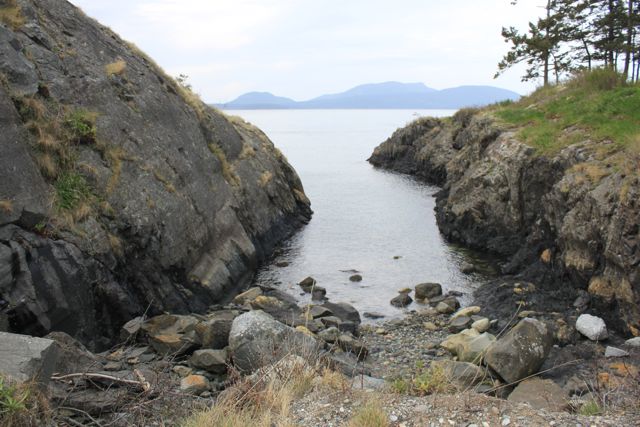 I still had to get back to Anacortes, another 7.5 nm. I had one last break at Strawberry Island before crossing over to Anacortes. Strawberry used to have 3 great Cascadia Marine Trail campsites but due to budget constraints they have been closed, along with the vault toilets. It’s still a great site with beautiful views up and down Rosario Strait and one of my favorites places to stop.