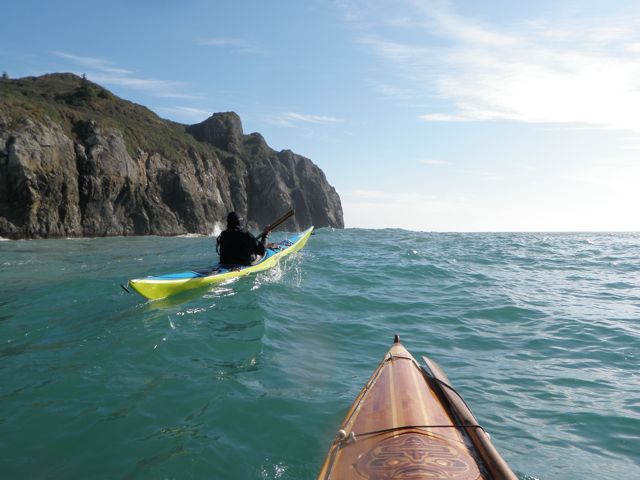 For a lot of reasons, John Petersen’s Traditional Arctic Kayak Symposium (TAKS) is now one of my favorite kayaking events. For one thing, it’s always held at some spectacular location along the California coast −− San Simeon, Mendocino, and this year Trinidad. Other symposiums like SSTIKS, the Puget Sound, Port Angeles, or now defunct West Coast Sea Kayak Symposium, will have formal strokes, rescues, and rolling classes, and you'll come away feeling like you have learned a lot, but will still be looking forward to that one day when you can get out there in the real water. Well, at TAKS you actually get the chance to play among the rocks, swell, and surf. 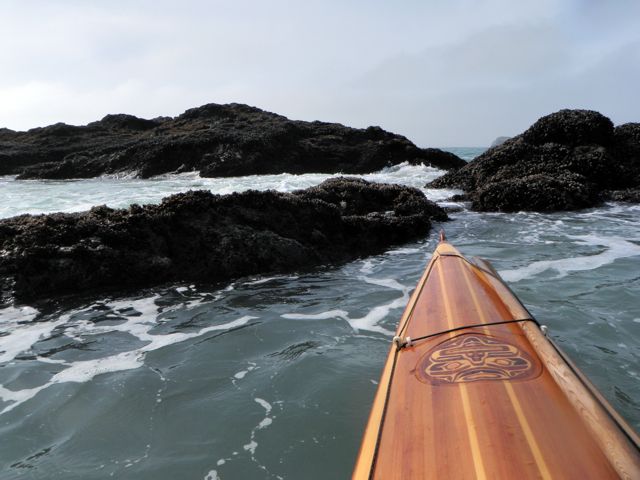 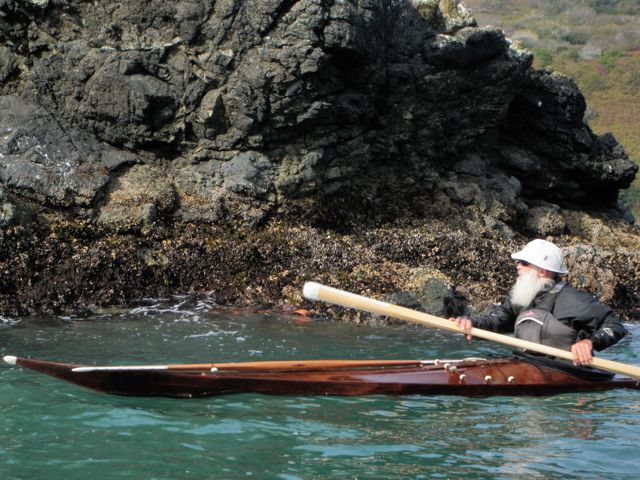 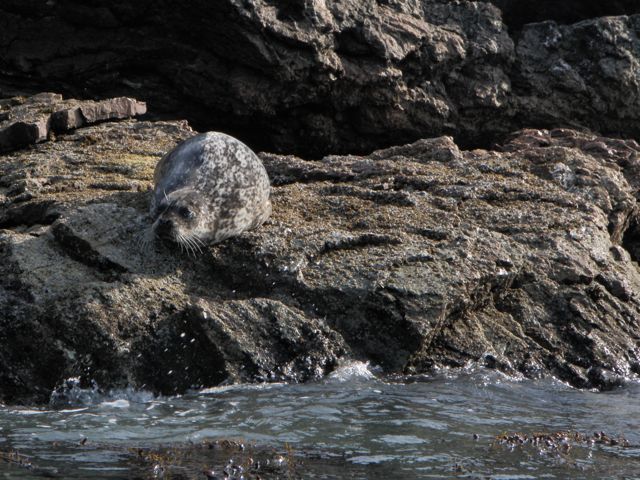 Trinidad is a wonderful coastal paddling location and a great choice for TAKS this year. Maybe I am a little biased because it is only a 10 hour drive from my home, which made it easy for me to come down with a couple kayaks. Trinidad Harbor provides a sheltered put-in and calm water for rolling instruction. Just south of the Harbor is a playground of stacks and rocks. Just north of the Harbor around Trinidad Head the water changes to an exposed coastal environment, with big swell, off-shore rocks reeking of guano and crowded with birds and sea lions, and of course the famous "Smack Wall". The surf ranges from gentle to challenging, depending on which beach you choose. By the way, just up the hill from the beach are three small restaurants and a grocery store, which I visited plenty during my short stay (I recommend the “Condescending Vegan” bagel sandwich at the Beachcomber Café.) 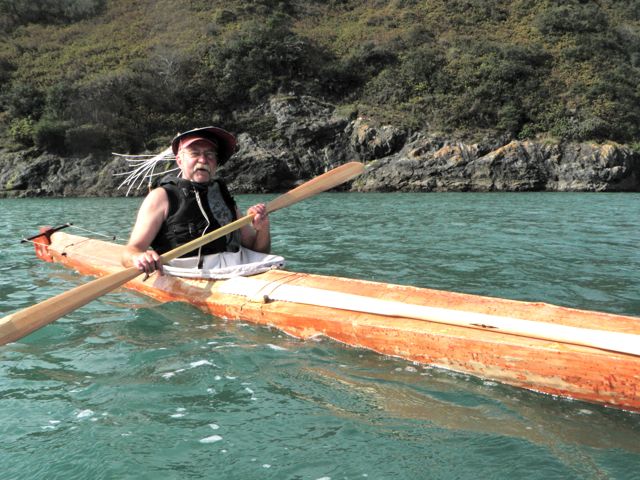 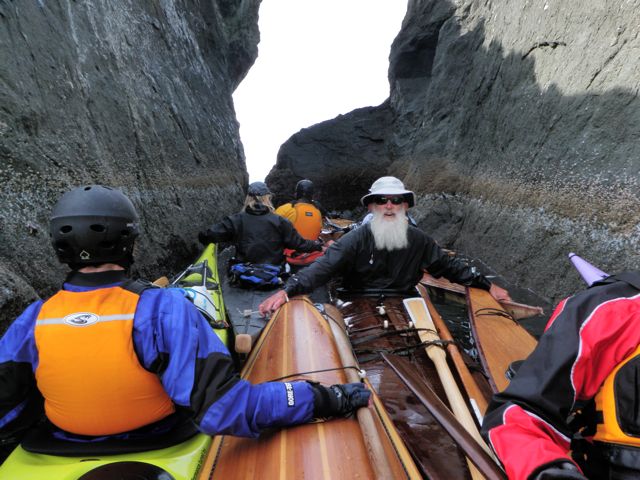 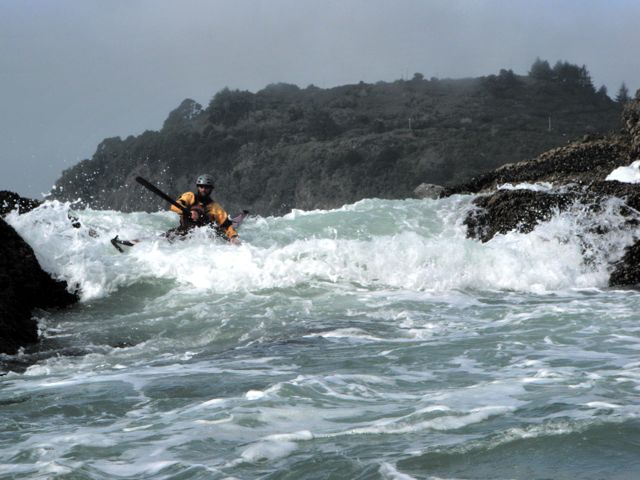 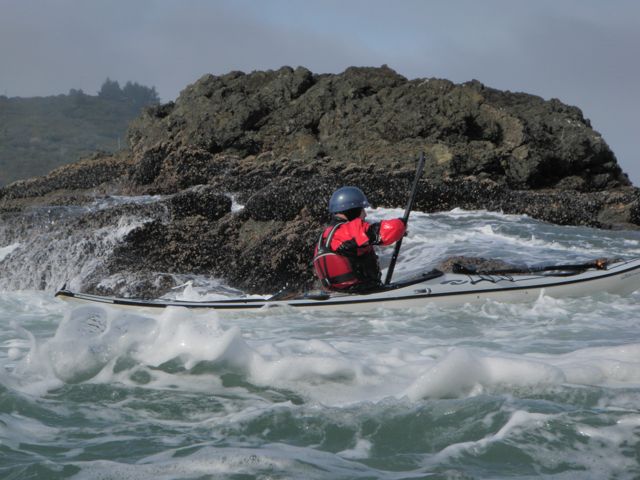 Most people camp at the event. A schedule is posted, but if you want to know what is really going on, it’s best to just ask John. Things are kept pretty casual. I think they had safety meetings or demos every morning but I never showed up for them. On the Friday morning group paddle we started with everyone counting off, but at the end of the day no one was checking if anyone was missing. You did sign the waiver, didn’t you? Instructors and expert paddlers abound, but be prepared to take care of yourself, just like you would at home. 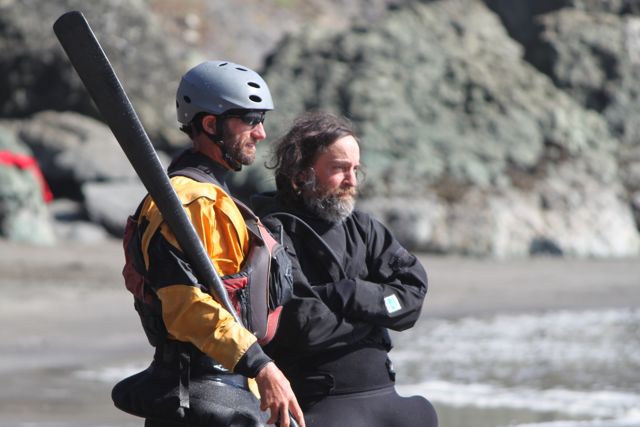 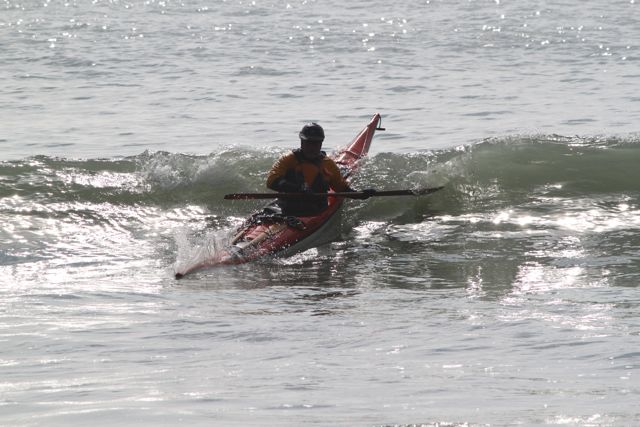 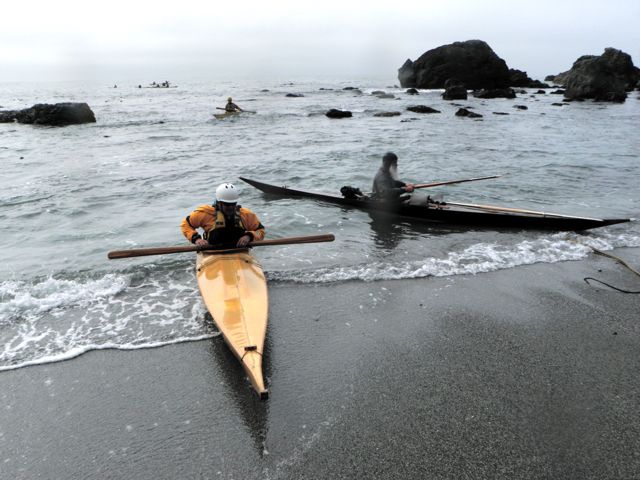 I took the opportunity to get some help from Dubside, Cheri Perry and Turner Wilson on my norsamik masikkut (forward−forward norsaq roll). One thing that Turner made a big deal of was the importance of the ajaaq seeqqortarfik, the knee support beam which sits just forward of the masik. Many modern American builders will omit this extra deck beam on their skin−on−frame kayaks because it appears to be structurally redundant. Turner says while the purpose of the masik is to provide support for the coaming, the ajaaq seeqqortarfik provides the contact for the knees to control the kayak. In Greenland this beam is carved to fit against the paddler’s thighs and knees. I remember someone saying that the real reason there are two deck beams there is because it reduces the creaking noise that can scare away game. Well, whether you do it with the masik, ajaaq seeqqortarfik, a thick pad of minicell foam, or norsaq wedged crosswise above your thighs, the principle is the same: a snug fit with your thighs and knees transfers the movements of your lower body to the boat. The less that contact will slip, the better your boat control will be.

Good news for you rolling enthusiasts: in the TAKS rolling competition PFDs are optional! In all of the other rolling comps and kayak races I’ve participated in, PFDs have always been required, which has lead may competitive rollers to acquire low−profile inflatable PFDs to wear under their tuiliks. Secretly, they typically don’t bother to arm the CO2 canister. I had assumed that it was the always the rule to wear a PFD. Instead, I suspect that it is simply an insurance requirement: the federal law clearly says that you only need to have a PFD "readily accessible". The exact quote from the Coast Guard site is: “Though not required, a lifejacket should be worn at all times when the vessel is underway.” Being "readily accessible" is probably open to interpretation and could mean tucked under your spray deck on your lap or lying under the rigging on the back deck. 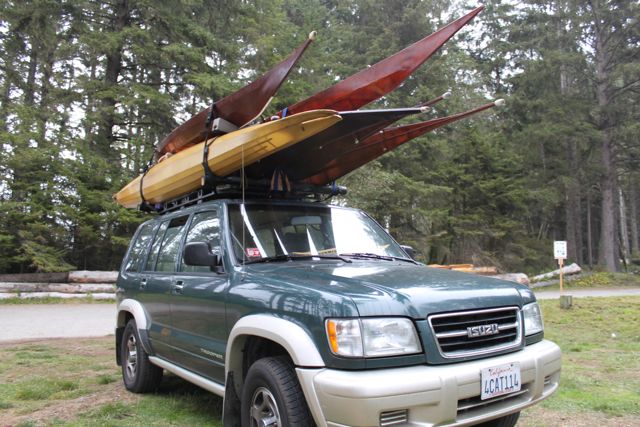 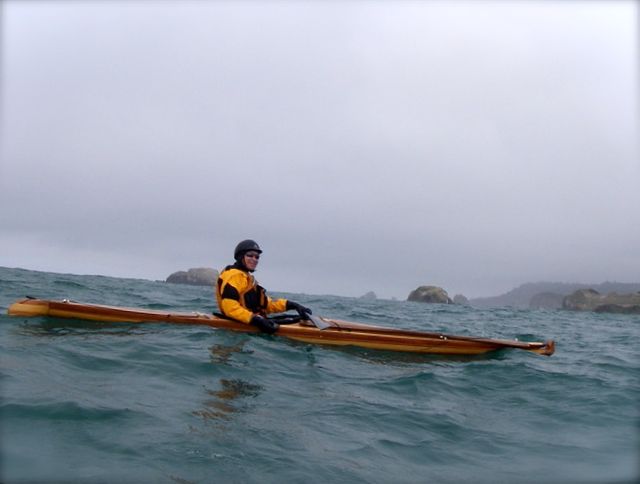 John brought along six of his kayaks −− works of art. He recently came up with a kayak kit. The pieces break down to fit into a box 6 ft long. The gunwales are scarfed, the masik preformed and laminated, and the ribs pre−bent. He showed me one kayak that that was made from the kit. It was quite impressive. I especially liked the white fur seat he had in it. Was it sheep’s skin? I would love to see him make a pair of fur paddling pants like that. Faux polar bear pants.

I finally got a chance to paddle my baidarka in true coastal conditions and was quite pleased: a smooth ride in the swell and clapotis. In surf it pointed straight down the wave face and tracked like a train. Unfortunately that front hatch still leaks, and I don’t like how the waves like to catch the long nose and push it around on the beach, making it difficult to launch in surf.

Great post. Blue with envy for not been there. First news I had about the ajaaq seeqqortarfik.
Thanks for sharing it.

Oh man -- I wish it WAS summer. For those who live in the north, it starts to get cold for kayaking. I'm already looking forward to next Spring.