Dash Point Pirate TV arrived at Kayak Academy's Greenland Week 2010 Competition with cameras rolling! I was juggling shooting video with jumping in and out of my kayak to actually compete in the events!

This was the first attempt by Kayak Academy at putting on an event like this (actually, the first formal Greenland-style competition ever held in North America), and it was impressively well-organized. The events started on schedule and, as far as I know, the organizers didn't run into any major hiccups.

One of Dubside's goals was to design the events (ropes gymnastics, race, harpoon throwing, rolling) to be very spectator-friendly. One of the ways they did this was with real-time scoring: competitor's scores were displayed during the event on monitors. I thought this worked especially well during the rolling competition. Two evenly-matched competitors would roll simultaneously, and suspense would build as the crowd waited to see who would come out ahead as the clock ticked down.

I think some of our best video came from simply talking to a few of the competitors, coaches/judges or personalities who just showed up to watch. In our first interview, Duane Strosaker talks about being attacked by a great white shark in his kayak! In the second, Richard Lovering chats with Helen Wilson about rolling. I'm currently editing a series of these interviews that I'll post here.

It's Summer Again, in November Wednesday’s high of 74 degrees at Sea-Tac airport broke the record for Nov. 3 set 40 years ago in 1970. It also matched the all-time high temperature for November. The last time a November day was as warm was in 1949. So let's hear it for global warming! It was perfect day to play outside, especially because the predicted max ebb current was -7.7 knots at Deception Pass. As usual, I showed up a little late to the party. George Gronseth and Maligiaq were already there with a group of students from Greenland Week. By the way, did you know that Canoe and Kayak magazine has named Maligiaq the best kayaker in the world? If you have the weekend free, don't miss Kayak Academy's Greenland Kayak Competition this Friday, Saturday and Sunday at Lake Sammamish. Jeff Renner, chief meteorologist for KING5 news will the be emcee!

At 4PM Saturday there will be a rolling demo by the masters, then we will all meet at a local pub for brews and dinner before the evening presentation (open to the public) by native arts specialist and kayak builder Kiliii Yu. Kiliii will talk about his 30 day trip in a traditional skin-on-frame kayak along the exposed west coast of Vancouver Island. The trip was entirely self-supported and he fished and foraged along the way, gathering shellfish and whatever else he could find when the tide went out. It should be a fantastic presentation, if only because Kiliii is an amazing photographer. 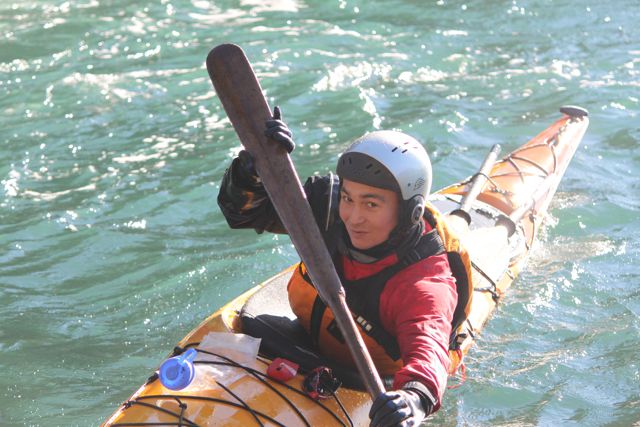 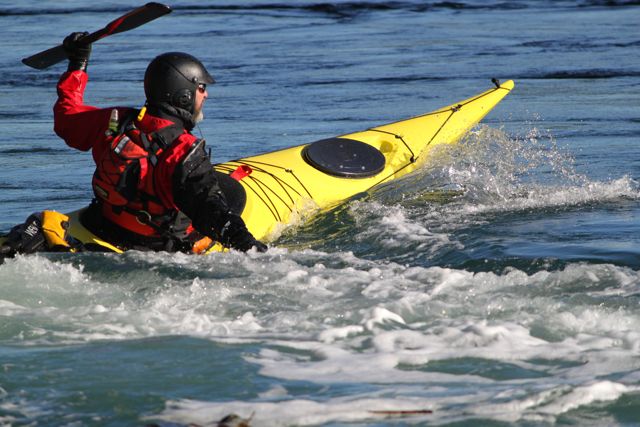 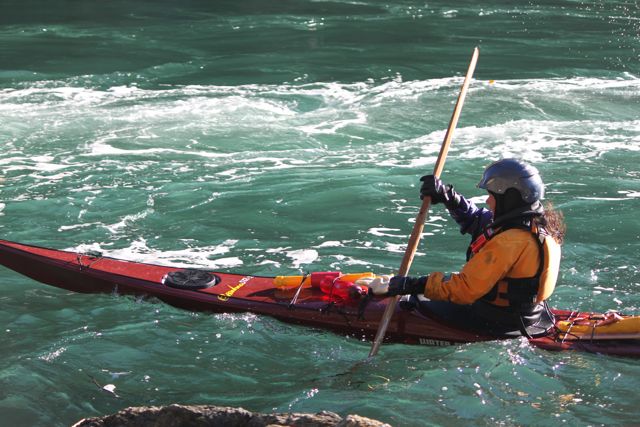 Even with the current at this speed, on a calm day the water can be totally flat. There were no standing waves to surf. Playing around means peeling out over and over again -- a lot like just trying to hop onto a fast moving sidewalk without falling over. You can practice doing this forwards and backwards, bracing with your paddle or just with your hands, or with just edging the boat, using no hands at all.

Maximum current is when you get the big whirlpools. They form at the edge of the boils. When a boil starts to surge up, which occurs periodically, you will start to see a depression in the water where the boil collides with the main current. The depression will deepen into a whirlpool, up to about 3 feet deep. You can run your kayak over it and get sucked in by the stern, and it will twist you around. The suction is so strong that if you capsize it may be impossible to roll up until it releases you.They don't last long and will release you in a few seconds.They come in series though so don't be surprised if you escape from one only to fall right into another one. You know, after doing some river running, these whirlpools don't scare me anymore. Yes, it's all a matter of perspective. If you ever want to overcome your fear of something, just try doing something even more scary.