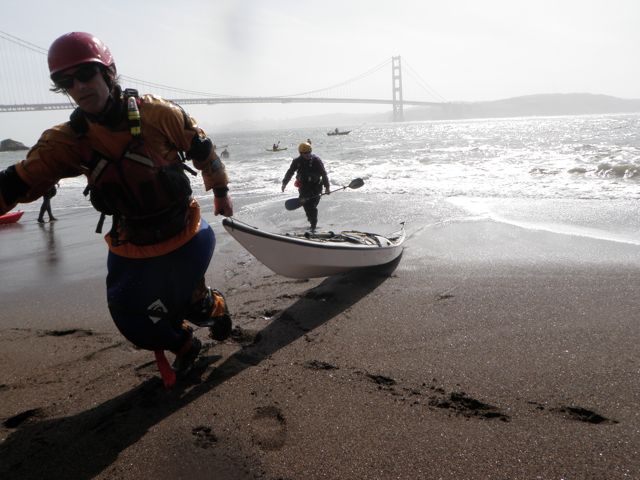 Since the tragic earthquake in Japan and the resulting tsunami has been big news, I thought it would be a good time to tell the story of the tsunami warning we had for the West Coast during the Golden Gate Sea Kayak Symposium last year. A magnitude 8.8 earthquake lasting up to three minutes struck the coast of Chile on February 27, 2010. It ranked as the sixth largest earthquake ever to be recorded by a seismograph.

The tsunami had been predicted to hit the Bay Area around 1PM. Our group which was taking the BCU 4 star leadership class with Gordon Brown had gotten off the water for lunch at Horseshoe Cove at 12:30. The situation happened to make for a good decision-making exercise. We stood around in our drysuits on the small beach under the pier, arguing about what we should do. A wave of 1 meter or less was predicted out in the ocean, but no one knew what it would be like in the Bay. The Coast Guard hadn't issued any warnings to evacuate, but we noticed that they had moved all of their boats out of the station to deeper water. And all the other kayakers seemed to be going about their business and classes continued as usual. Why did it seem like we were we the only ones worried? One woman in our group had been monitoring Channel 16 on her VHF all morning and seemed especially concerned. She thought we should pack everything up, get in our cars, and run for higher ground. Who knew how big this was going to be?! I don't remember if it was her or someone else, but someone there personally knew someone else who had witnessed the 2004 Indian Ocean Tsunami. Mr. Brown and our other instructor, Tom Bergh, said that they thought that the safest place was out in the water. Although that may have been true, I couldn't help think that there was a little bravado in that statement, like, "Yeah our skills are so rad, dude, that we can just sit out there waiting for that big wave, and when it comes, man, we will all have one awesome ride! " Mr. Brown did admit that, no, he actually did not have any experience paddling in tsunamis.

I thought to myself, If you guys really thought that it was safer out in the water, then why did you lead us back to the beach?

People kept talking and this went on and on as time was running out. We needed to decide. Soon. Finally I made a motion to take the kayaks up to the parking lot which was about 10 feet above the water and have lunch, and suggested we vote on it. We had less than 10 minutes left to do this. I didn't really care if my own kayak got washed away since it was a rental.

Later, as we ate lunch from our drybags, sitting on the sunny strip of soft green grass high above the water, 1PM came and went uneventfully, and all you could hear was the sound of water gently lapping against the shore, mixed with the echoes of children playing in the distance. Later we heard reports that a group paddling around Angel Island experienced 8 ft swells about that time, which may or may not have been related to the tsunami.

If there is a lesson to learned from that experience I think it has something to do with the synergistic power of paranoia. With very little information and a lot of unknowns, a small group of scared people can really work themselves up into a frenzy thinking about every awful thing that could possibly happen.

By the way, here is some video of yesterday's (3-11-2011) tsunami as it hit Sausalito. I am impressed by how much power a wave even a few inches high has because of the huge mass of water behind it.

It's interesting that you brought up the idea of groups taking up the roll of a canary in a coal mine.

I was teaching an advanced kayaking course several years ago and we paddled out to an offshore island for the evening with the plan to paddle home the next day. During the night a huge gale storm came in which really freaked the group out. We were wind bound for a day but when the time to vote or stay the next day everybody errored on the extreme conservative side.

It's interesting how that happens.