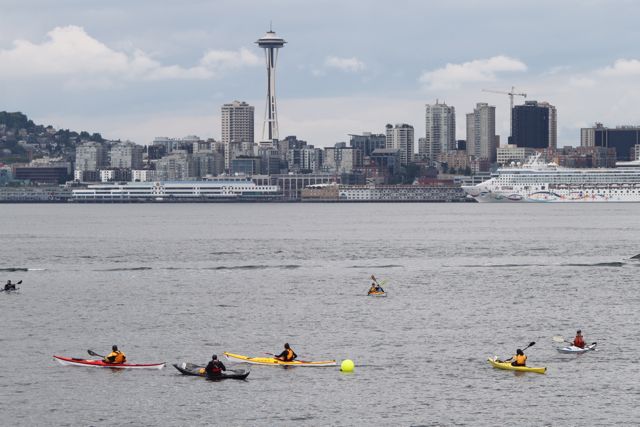 Kayakers enjoy a view of the Seattle skyline from Elliot Bay at the Northwest Paddling Festival 2011.

I slept in late this morning but decided to drag myself out of bed to show up at the first annual Northwest Paddling Festival in Seattle. I used to be a big fan of the local kayak symposiums until I realized that I had taken so many classes that I was taking the same classes over and over. I thought maybe the instructors were getting tired of seeing me. I imagined them thinking, "Dude, you really need to stop taking classes and start getting out there paddling on your own!" I still enjoy the symposium atmosphere though. I like running into people I know and checking out the latest crazy gear and kooky kayak ideas the vendors are trying to sell to the gullible and uninitiated. This year I give the grand prize to the catamaran type stand-up paddling thing made by Easy Rider. It was so new the rep couldn't even tell me  much about it or even what the hell they called it. From the brochure I grabbed I figured out it was called the "WaterWalker Glider". You stand up with one foot placed in a hole in each hull, paddle it like a SUP but steer a rudder with your knees. The winner of the race that morning was using one. Optional features included the lightweight and waterproof Torqueedo 403 electric motor with lithium battery and solar charger. I did not see that it came with cupholders. 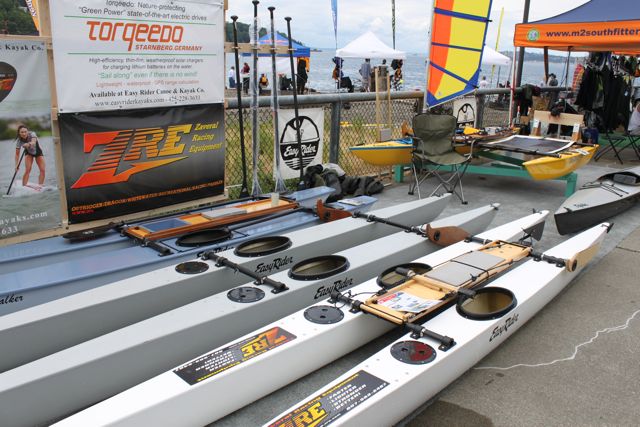 There was one presentation I really wanted to see: Rob Avery's talk about expedition paddling tips. Rob is a kayak instructor who runs Kayak Kraft kayak school on Bainbridge Island. He recently completed an expedition in the Aleutian Islands and is planning another trip again this year. It turned out today that he forgot to bring his laptop so he said his presentation would have to be a casual “fireside chat” without slides. A few of us sat around in folding chairs in the tent as he talked.

He started by discussing the importance of navigation skills and reading the weather. Information about tides and currents are important but in some areas you simply won’t have any, or the information you do have may be wrong. You may not have a weather report. How good are you at predicting the weather by looking at the sky? Mark your location on the chart with a grease pen as you go. Then there is the importance of "adequate reserve". Suppose you can’t land at your planned spot at the end of the day. Can you paddle another 10 miles to the next landing spot? With that in mind, if you plan to paddle 20 mile days, you should be able to paddle 30 miles a day. Expeditions can consume your life both before and afterwards. A two week trip actually may take 6 weeks of your life, including two weeks before in preparation and two weeks afterwards to wind down from it.

Then we got into the "nitty gritty". A long narrow tent is much easier to find a spot for on a beach than a round one. Alpine tents will serve you well on the stormy, rugged BC coast. He likes MSR. Synthetic sleeping bags are better because they still work when when wet. Although it compresses very well, the down in down−filled bags will clump up with moisture and becomes useless. A sleeping bag liner helps keep the moisture from transferring to the bag. Although those Kelty tarps are light and affordable, they aren’t waterproof. Try to select gear that will have more than one use. Paddles can serve as poles for a tarp, for instance. Don’t bother using a stuff sack for your tent: stuff it right into the ends of your kayak. Bring duplicates of critical gear, like 2 cooking stoves plus a repair kit. White gas is a more efficient fuel in terms of space and BTUs per pound for cooking and, unlike isopro, the fuel canisters are reusable. Bring two days of water, 4 liters per person per day, minimum. In areas where fresh water is unavailable you will have to bring more. Treat wild water with a filter or just bring it up to a boil to get rid of the pathogens. Using a water filter rather than boiling will save cooking fuel. Mix in some protein powder into your morning oatmeal. It will keep you full longer. You only need to bring two sets of clothes, one for paddling in and one for sleeping in. Wool is the best for base and outer layers and it won’t stink even after wearing it for several days straight.

Then the presentation ended and it was time for questions. I asked what was burning on my mind: what do you do about human waste? I’m used to designated campsites and composting toilets where I don’t even have to bring my own toilet paper. He said out in the real wilderness you just dig a hole in the intertidal zone and burn your toilet paper. He brings toilet paper but apparently seaweed makes for a good substitute, Turkish Towel specifically, because of it’s bumpy texture. I suspect the broad leaves of bull kelp would work OK too.

Of course you don’t want to just dig a hole in ecologically sensitive areas. While in Baja, for instance, we brought along a portable toilet and packed all the waste out. A turd buried in the desert would dry up and last a hundred years, maybe more! We were only out a week though. Practical considerations must be taken into account for longer expeditions. So here is expedition kayaking’s dirty little secret and the sad fact of human existence: No matter how righteous we are about low impact and leave−no−trace techniques, or gush about protecting Nature’s beauty, we all end up shitting on Her in the end. 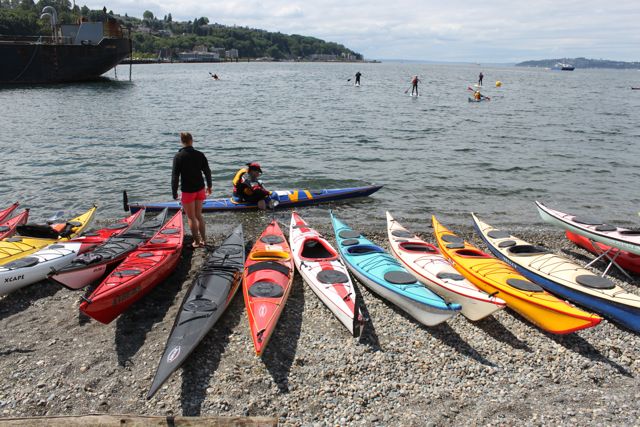 Amazing variety in the new sea kayaks available for demo at the Northwest Paddling Festival.

Posted at 12:06 AM in Northwest Paddling Festival | Permalink | Comments (0)