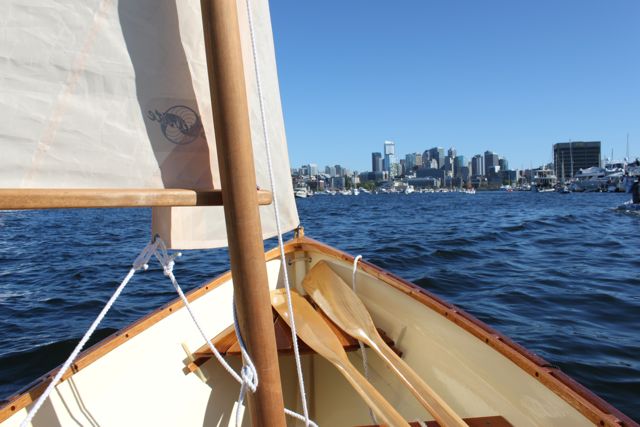 Even though I arrived late, I got a great spot for by boat at the Lake Union Wooden Boat Festival. When I arrived Sunday morning and called in on my VHF radio, they directed me to a spot behind the boathouse, right in front of a bench. Nestled between large powerboats, Annabel Lee looked tiny, like a toy. I left my  duffel bag, cooler and backpack inside −− evidence of my journey. I loved being able to tell people that I sailed her up from Tacoma. That seemed to impress them. Also that I built her by myself in my garage. Someone asked me if I kept to mostly sheltered waters. I said that as far as I was concerned, all of Puget Sound is sheltered water. It's really more or less equally hazardous everywhere, the main risks being wind, currents, and boat traffic.

This was the first time I was an exhibitor at any wooden boat festival. Since registration didn’t cost a dime, I figured I might as well sign up and try sailing to Seattle. I gave myself two days to get there, since with sailing you can’t really tell when or if you will actually get anywhere. If I couldn’t sail I thought I could at least row and make around 3 knots. And if I didn’t make it at all I didn’t lose anything.

After spending Friday night making last minute preparations, I launched around 8:30 AM on a sunny Saturday morning and made it to Blake Island by midafternoon. Blake Island was crowded and I thought I might not find a camping site. I took a nap on the lawn under the shadow of a tree by the Longhouse. There was still plenty of time left in the day to continue on and camp on Bainbridge Island at Faye Bainbridge State Park, or even maybe make it to Lake Union, so I sailed on.

I beat upwind but also struggled against a flood current. For about 45 minutes I was stuck at the South end of Bainbridge Island by Point Restoration. Then the wind picked up and the waves grew bigger. I remember looking around and realizing that, while there were quite a few boats out before, everyone seemed to have disappeared. I started to feel very alone out there. I abandoned the plan to go north, dropped my jib to reduce sail, pulled up the centerboard and fell off into a run back to Blake Island to find a campsite. Fortunately, I found a spot right on the beach on the sheltered west side. They charged $22 dollars for a campsite but they had running water and flush toilets and large garbage can−sized plastic containers to keep your food secure from animals. And on the other side of the Island they sell ice cream out of a window in the Longhouse. In the safety of camp I checked the Marine Forecast on my phone. It had turned out that a Small Craft Advisory had been posted for that afternoon.

A couple I met while camping on the island had taken the Argosy Cruise line to the island to camp. I discovered that if you are ever stuck on the island for whatever reason (because of injury, conditions, or losing your kayak for instance) you could call Argosy Cruise Lines and buy a one−way ticket back to Seattle for $20.50, depending on availability.

At night the wind blew harder and shifted. I lay awake listening to it blow through the trees. I woke up around 5:30 AM, packed and launched off the beach at 6:15 AM. I wanted to take advantage of the high tide for launching and the building ebb current. I was also concerned about the 20 knot winds that were predicted for later in the day. I wished I had a GPS to record my track and speed (my last unit corroded and died long ago), because it felt like I was just screaming across Elliot Bay, a couple times even surfing a bit down the larger waves in the middle of the channel. I pulled up into the shelter behind West Point in no time, feeling very happy to successfully make the crossing, and rowed my way through the Hiram Chittenden Locks, and occasionally sailing through the ship canal to Lake Union. 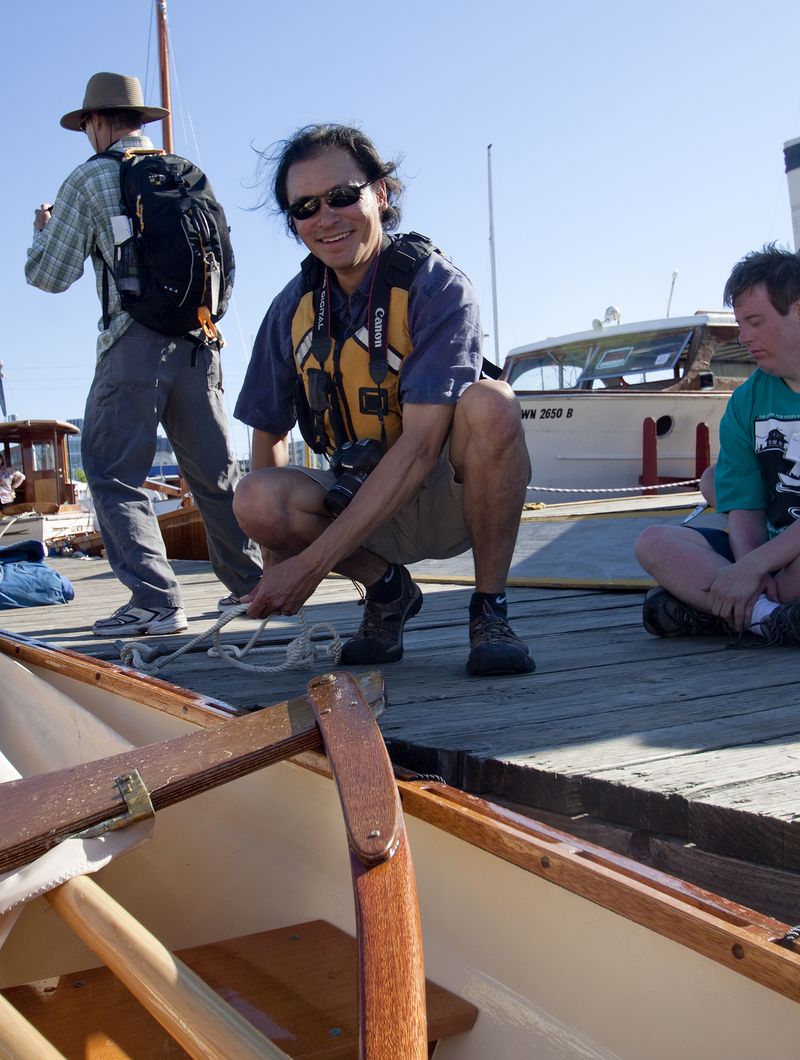 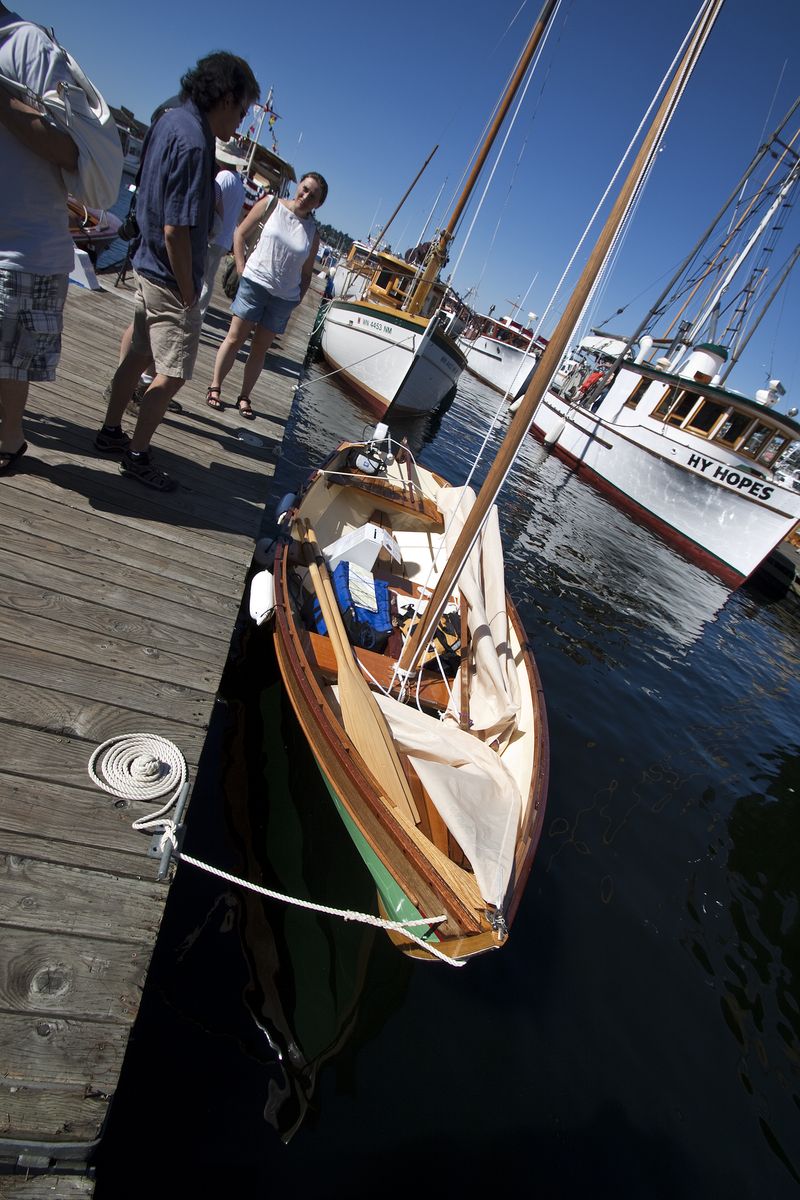 I’ve posted my pictures from the Lake Union Wooden Boat Festival Gallery here. Please also check out my friend Katya Palladina’s wonderful photos (including the two above) in her galleries here, and here. 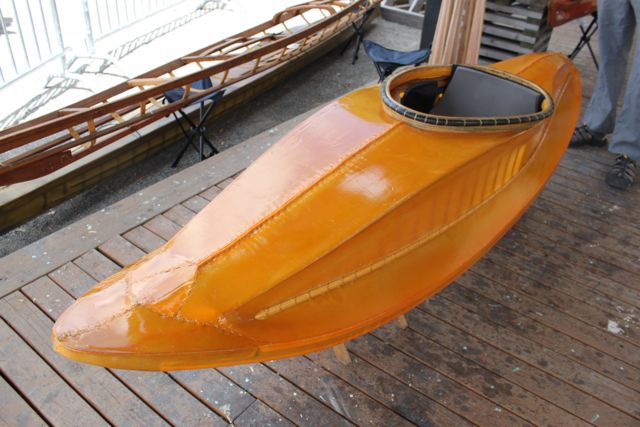 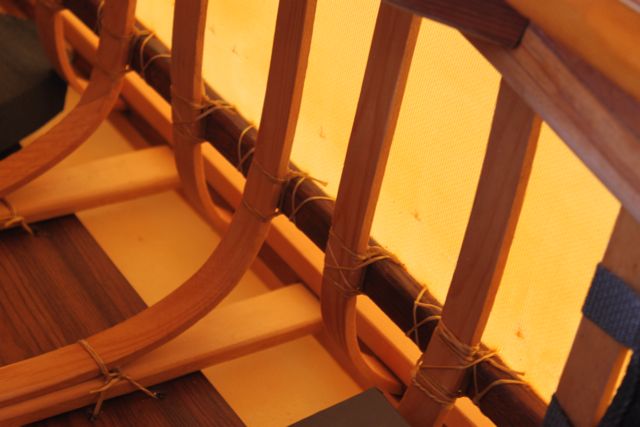 I was really impressed with the skin−on−frame surf kayak. The construction is fairly traditional (steam  bent ribs rather than plywood frames). I like the use of outwardly bent ribs and the external stringer to achieve the concave surface.

The other thing that impressed me was the Salish Canoe which was carved out of a cedar log. The canoe was partly filled with water and large rocks that had been heated in a fire were used to get it hot, then the whole thing was covered with a thick plastic tarp. The steam softened the sides of the canoe enough to get them to flare apart. 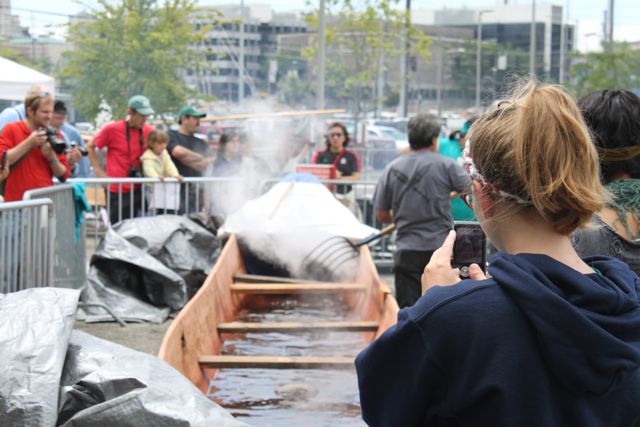 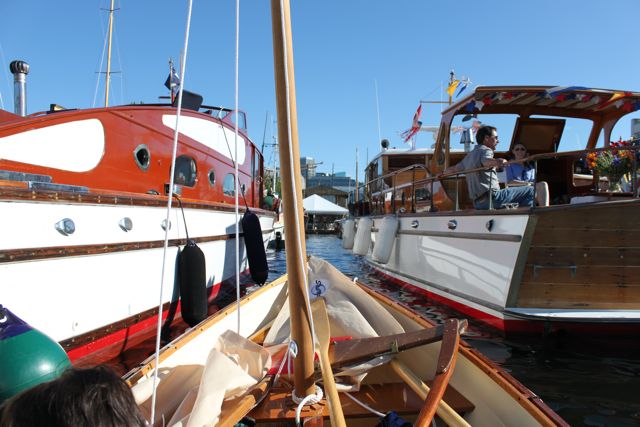 Wooden boat people in general tend to be a pretty good crowd and will talk your ear off about their boats if you let them. Once in a while you will run in to a genuine prick though, like the Captain of Industry type I was parked next to. People who own really expensive classic powerboats aren't like you and me, even the wooden boat owners. For one thing, they can't be bothered to make boats −− they just buy them. He was so paranoid I was going to scratch his sparkling white hull while I was trying to maneuver through the narrow space around his boat. “Don’t scratch my boat,” he said. “I just paid $30,000 for this paint job!” “Sorry," I said, and he replied with, “'SORRY' doesn’t cut it, buddy!” Well, if you want me to stay away from your boat why don’t you help me get passed you instead of waving that damn boat hook in my face, asshole!

Sweet looking surf SOF. It looks like it is based on the Valley Rush. Very cool stuff, do you know who built it?

Hi Keith. Sorry, I don't remember who built it, but I think it came out of the Anacortes Skin Boat School: