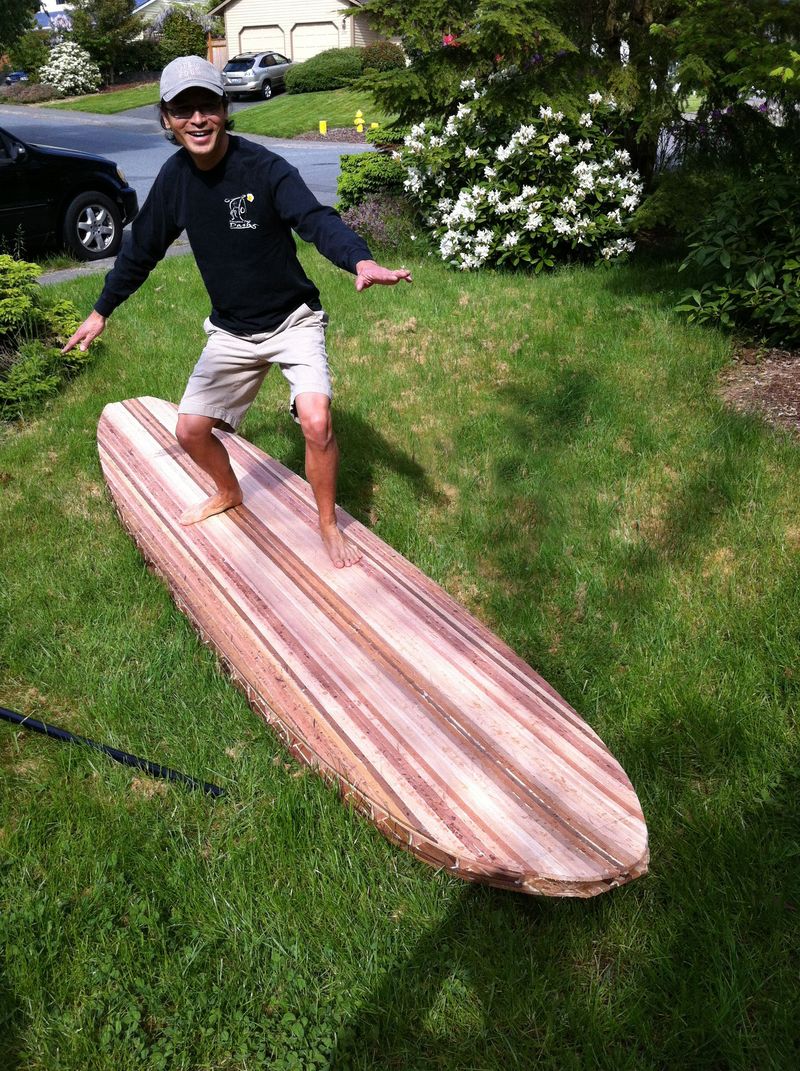 Here is a picture of the board with the finished deck and bottom. After the bottom was planked the overhanging edges were carefully trimmed with a handsaw and planed flush to the rail strips with a block plane. It still weighs almost nothing and now I’m getting really excited about taking it out on the surf! 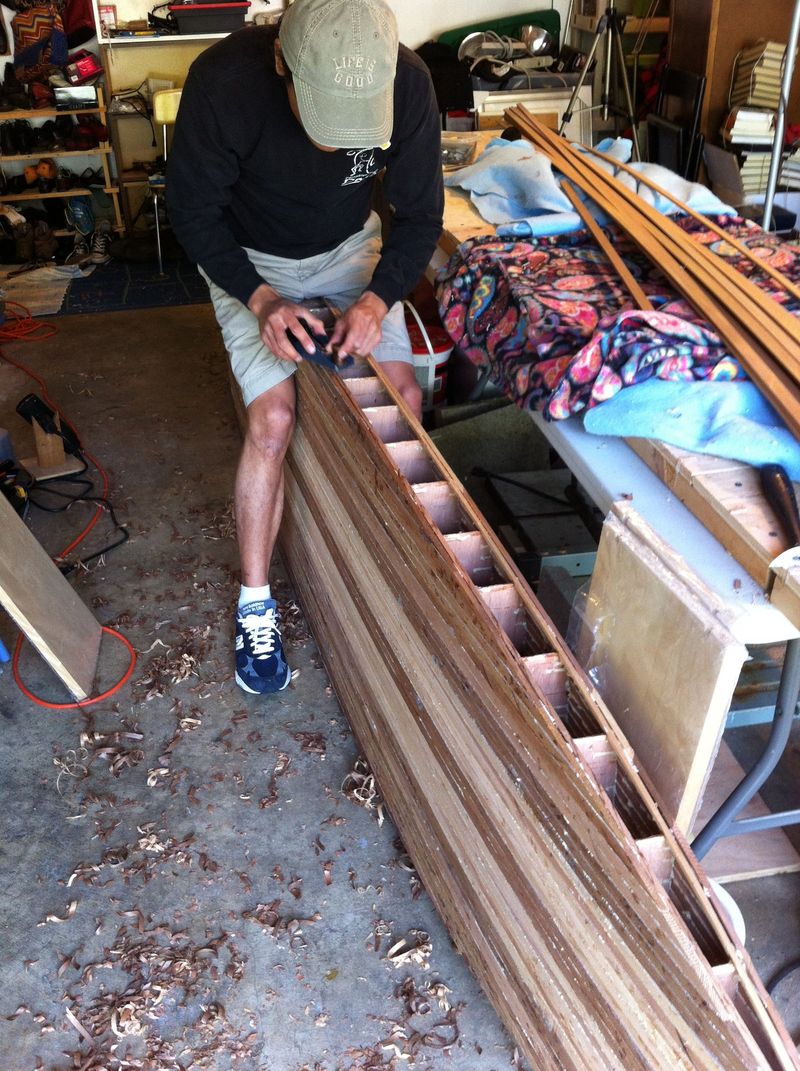 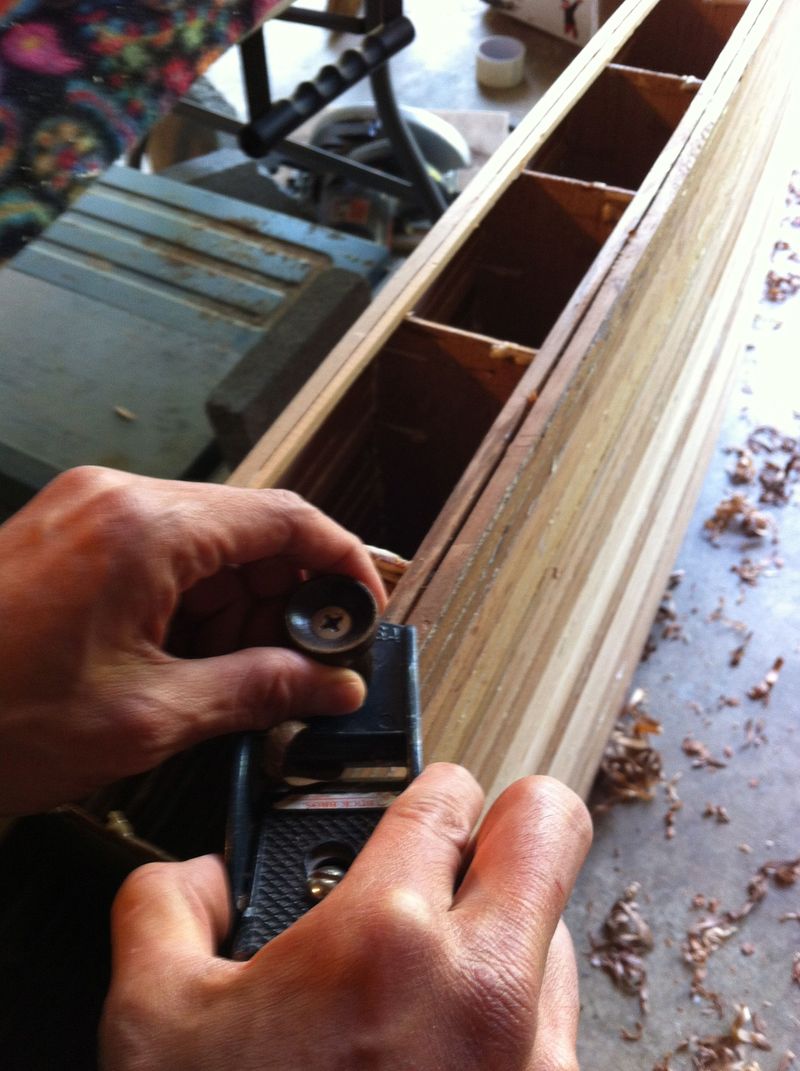 The process of building the rails (sides) on this board really concerned me. The instructions recommended laminating them from several thin strips of wood (balsa or paulownia), enough to build up a rail thickness of 1 1/2 inches. With this thickness, the rails could be carved creating soft, rounded edges with the deck and hull. Since we are working in cedar, building up a rail that thick would require a lot of wood and add a ridiculous amount of weight to the finished board. Instead we decided to laminate the rails out of two layers of cedar strips, one 3/16th inch thick and the other 1/4 inch thick. This would result in more squarish sides. My guess is that it might affect performance on surf and waves but probably wouldn’t make much of a difference on flat water. By this time I have abandoned reading the instructions and am making all this up as I go along. Typical boatbuilder! 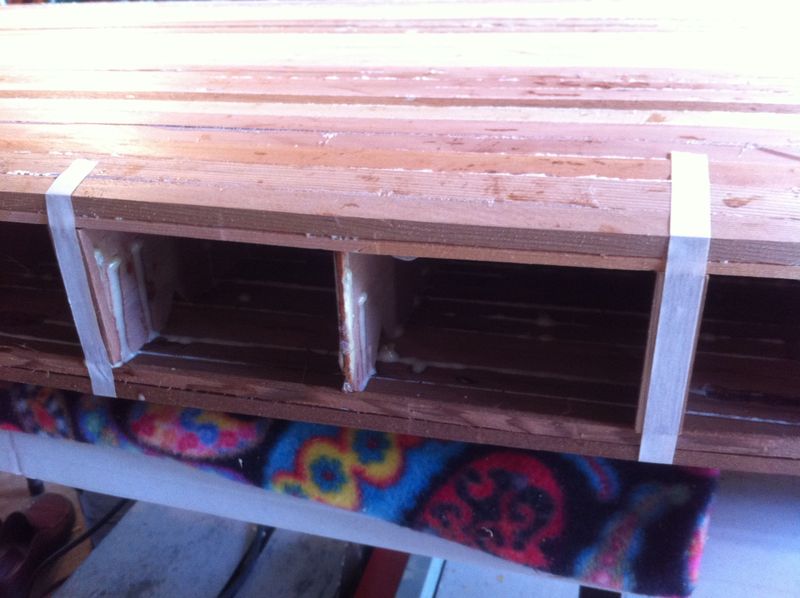 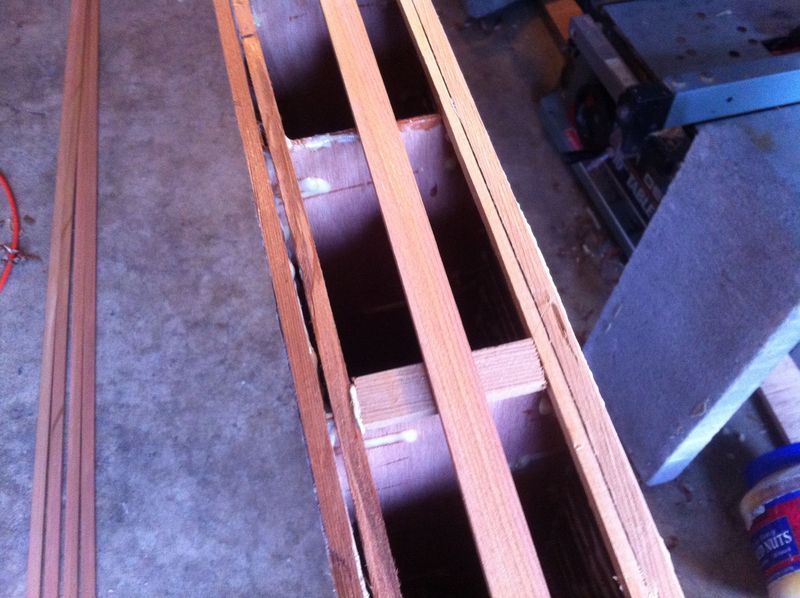 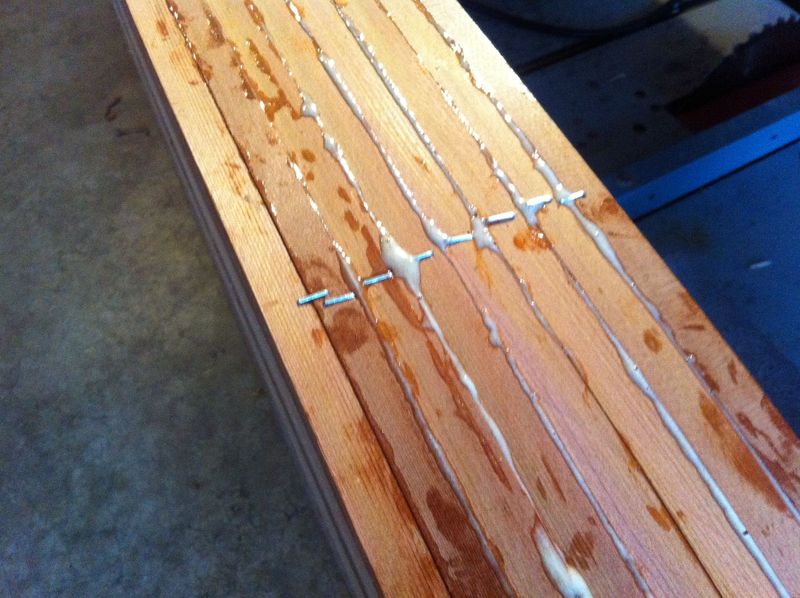 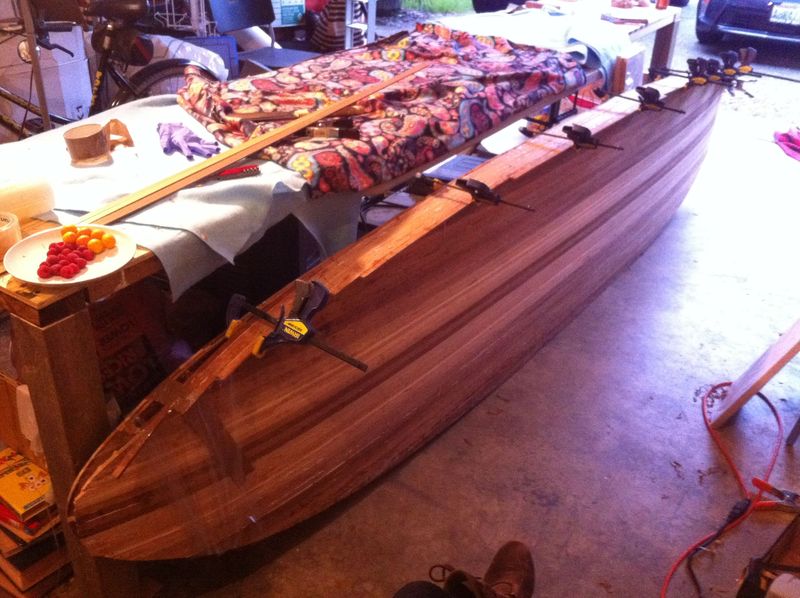 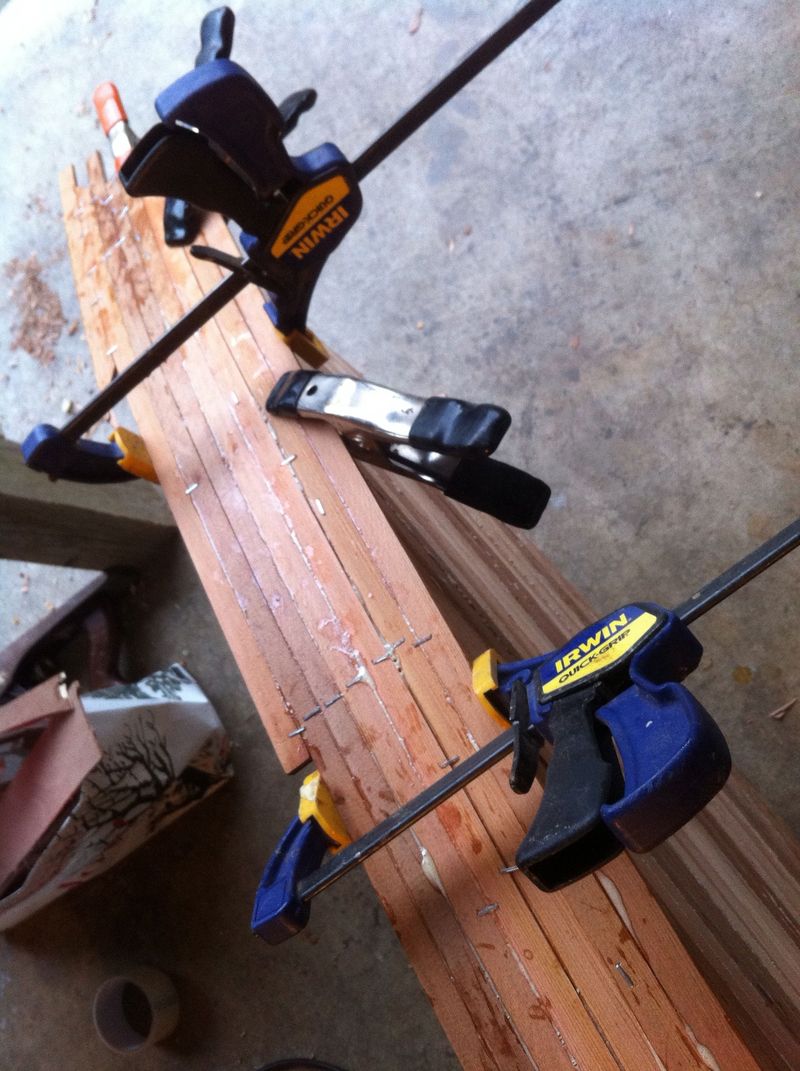 The inner layer was made from 3/16th inch x 12 ft stock laid lengthwise (horizonally). We choose to use thinner stock so it would bend and follow the curve of the board easily. Short pieces of 1/4 inch thick strips were glued along the edges of every other rib. The inner layer strips were then glued to them with Gorilla Glue and stapled and clamped into place. Stapling makes it possible to position and glue all of the strips into place at once. The staples are pulled out after the glue has dried. Since an outer layer of strips covers the inner layer, the staple holes are not visible.

The outer layer was made by laying short strips vertically, perpendicular to the inner layer strips. We used epoxy thickened with wood flour instead of Gorilla Glue, because we anticipated that there would be gaps between the strips, and epoxy is a better choice when you need a gap-filling glue and when joints might be exposed. The outer layer vertical strips were also secured into place with staples, but only at the ends, and stapled into parts of the inner layer that would be trimmed off afterwards. Sometimes duct tape was needed to keep strips in place. The goal is to avoid visible staple holes in the final layer as much as possible. 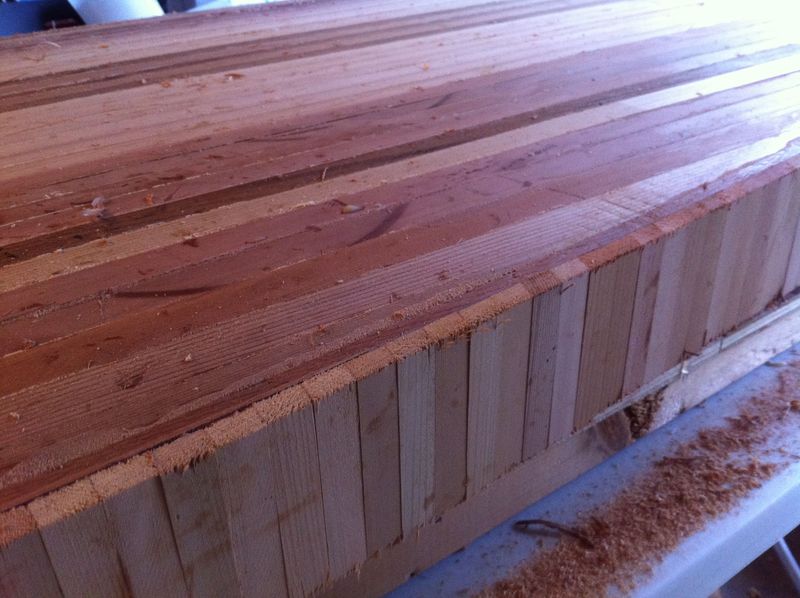 A word about epoxy: I like to use MAS brand epoxy, specifically the Low Viscosity Resin and Slow Hardener, because that is what I have used in the past and am familiar with. I’ve heard so many horror stories about working with epoxy so I don’t like to mess around. The last thing you want is to ruin all of your beautiful woodwork by trying to save a few cents on epoxy! The Low Viscosity Resin works well for a clear wet out of fiberglass, joints and making fillets. The Slow Hardener gives you plenty of working time. It is unlikely to kick off prematurely as you are spreading epoxy to wet out fiberglass. Because of the slow cure time, it doesn’t produce any of the dreaded “amine blush”. You also have plenty of time to add additional coats of epoxy without prior sanding. The disadvantage is that in cold weather, it may take a couple days or more for a thin layer of epoxy to completely cure. If you are in a hurry to meet a deadline this can really mess up your plans!

I save all my sanding dust from previous projects in a big can and use it as “wood flour” for making thickened epoxy for joints and fillets. It’s free! (You might be surprised to find out how much a small container of “wood flour” costs.)

After the epoxy on the second layer cured, we trimmed off the overhanging edges of the rails with a handsaw, and then carefully trimmed them flush with the deck and bottom with a block plane. Since you are planing the end grain of the outer strips, the plane needs to be really sharp. At this stage the wooden structure of the board is complete. It felt a lot heavier after putting on the rails. A lot still needed to be done to shape the edges of the rails and fair surfaces of the deck and hull, prior to sanding and glassing.

Posted at 08:50 PM in How to Build a Wood Stand Up Paddleboard (SUP) Free Step-By-Step Instructions | Permalink | Comments (0)