Vegan Adventures in Baguio from Baby Seal Films on Vimeo.

Traveling overseas on a plant-based diet requires a little planning and resourcefulness. It’s good to request a special vegan meal for your international flight, for instance. For that you need to call the airline in advance, at least 24 hours before, or maybe it’s within 24 hours. I don’t remember exactly because honestly I don’t do it anymore. But when I do remember to do it I am usually pleased with the results. You get your food before everyone else and it is a much less greasy and more interesting choice than the usual "chicken or beef" smothered with cheese product that everyone else gets. The airlines purposefully make it difficult to find the telephone number to call to make your request, so these days I just deal with what everyone else gets but only eat the veggies. I will also carry-on my own food such as nuts, dried fruit, and LARA bars (which are basically nuts and dried fruit). Most of the time I just sleep as much as I can on the plane and skip the meals. Flying in economy is so miserable anyway that you don’t really want to be conscious for it. Essential gear: inflatable neck pillow, a beanie (toque if you are Canadian) to keep your head warm and pull over your eyes, and Ambien.

While we are on the subject of eating and flying, I should mention one weird trick discovered by a mom to compleletly cure jet lag in one day. Fast for 16-12 hours prior to the time when you want to wake up. You can drink liquids but nothing with any calories in it. Then have a big breakfast. The caloric intake overrides the control of the suprachiasmatic nucleus over your body’s diurnal rhythm and resets your biological clock. I will also use sublingual melatonin to go to sleep at night, about 1 to 3 mg. Using this technique we didn’t have any problems with jet lag at all. 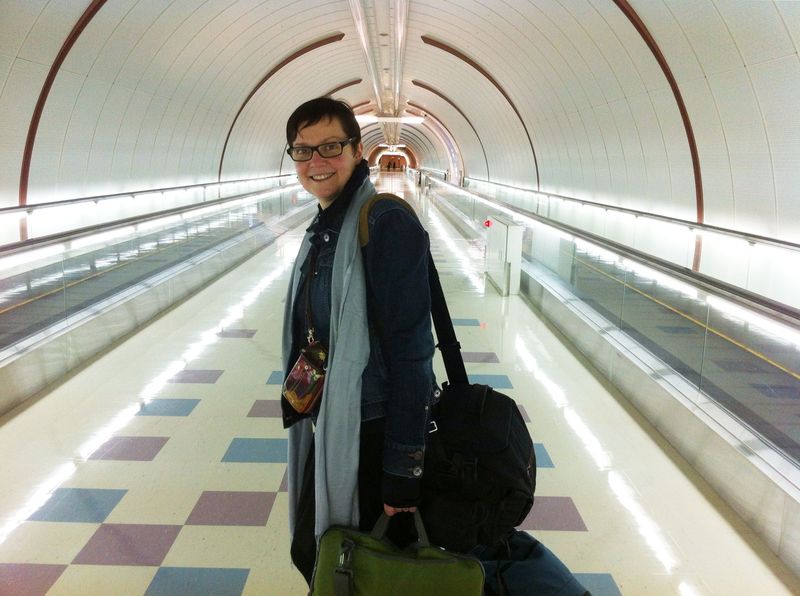 When traveling I do allow myself some flexibility in eating. When in Peru, for instance, I couldn’t resist that chance to try cuy (guinea pig), or eat the sushi in Japan. That might offend some people who say that I’m cheating, being hypocritical or “unpure” or something along those lines. Whether I am or not depends on the reasons I decided to stay on a plant-based diet in the first place. For me it is primarily for health reasons, because there is a lot of scientific evidence that a whole-foods, plant-based diet can prevent and even reverse the progression of the most common chronic diseases. I am also concerned about animal welfare, and especially the effect of factory farming on the environment. Lastly, I am a little concerned about my carbon footprint. Not eating meat is the single most effective thing you can do to decrease your carbon footprint, even more effective than switching from a standard car to driving a Toyota Prius.

In developing nations, you take a risk of getting gastroenteritis from drinking tap water, or eating raw fruits and vegetables and street food. Filtered water was available everywhere in large jugs. I also brought my own Lifesaver bottle, which I could use to filter tapwater. It came in very handy when bottled water was scarce and you just wanted some to brush your teeth. (Yes, you should avoid brushing your teeth with tapwater.)  The Lifesaver filters down to 15 nm and produces sterile water. It filters out all microorganisms, including viruses.

The higher end restaurants might have washed their produce in filtered water. You could wash your own vegetables in filtered water, but that alone might not remove the biofilm. Sprouts and root vegetables for instance, are known to actually absorb surrounding soil microorganisms into their tissues, developing a commensal relationship with them. That’s one of the reasons eating spouts is risky, even in the United States. What if that lettuce was fertilized with raw human sewage? You could try adding a little bit of bleach to it but I don't know how effective that is. I would have to be really craving a raw salad to go before I go to that much effort. In general I just avoided eating any raw vegetables or fruits unless I peeled them myself. 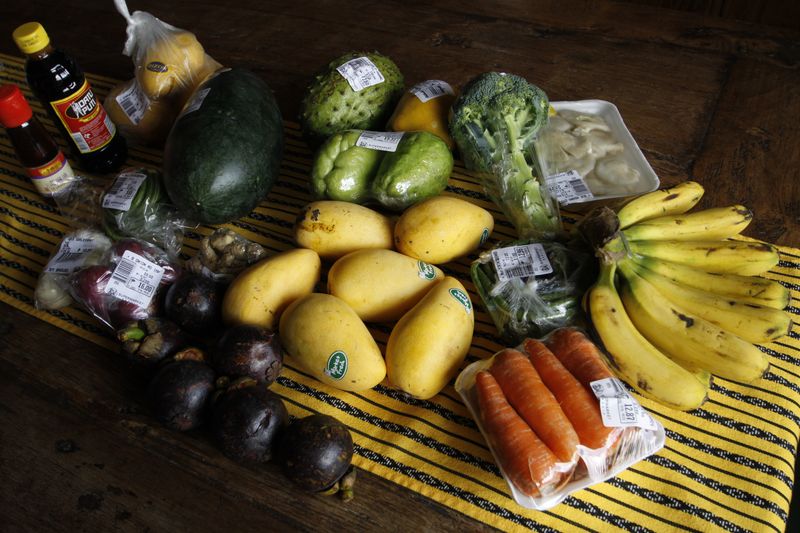 We were prepared to cook a lot so one of our first stops was the grocery at SM Mall. The kitchen at Ating Tahanan was equipped with pots and a wok, knives, and cutting boards, but we needed to buy cooking oil, soy sauce, spices and plastic wrap. We cooked mostly veggie stir fries and rice, tofu adobo, and that green mango/papaya salad I mentioned earlier. 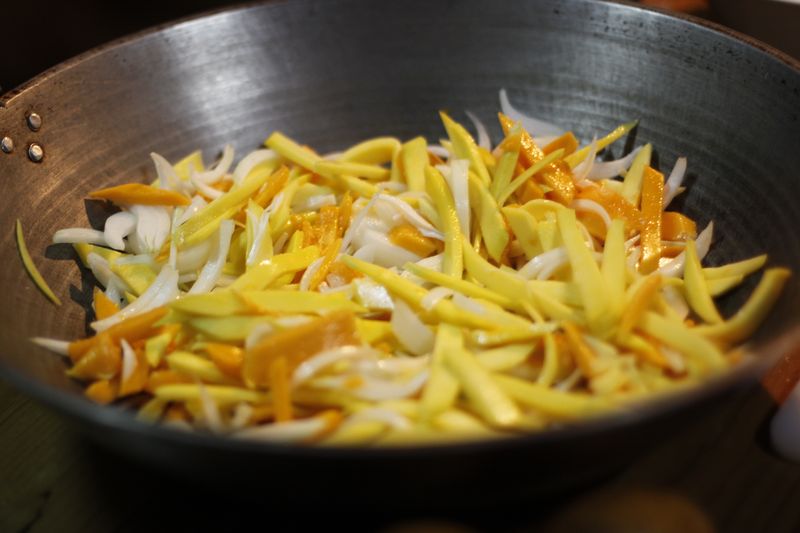 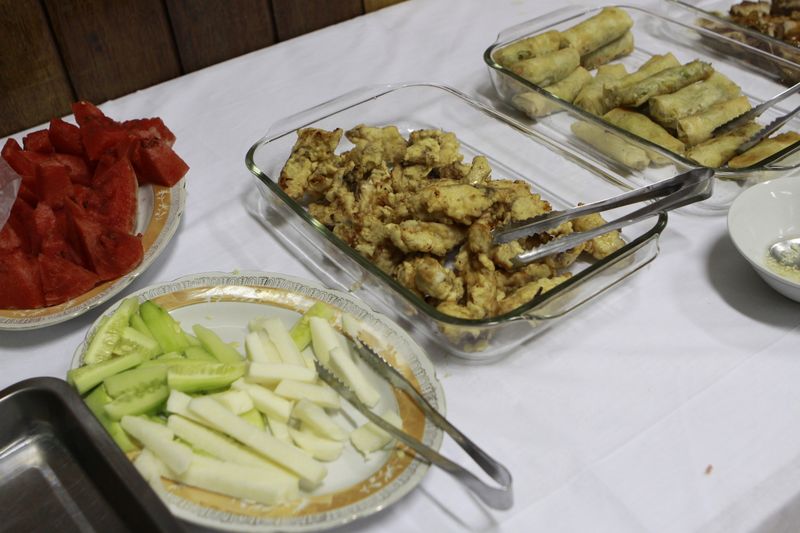 The meals they served in the hospital were excellent. They provided us with breakfast and lunch, so there was always a buffet set out in the lounge, which was perfect for grazing between cases. We would get a lot of rice, grilled eggplant, okra, chayote and sayote greens, green beans, bananas, watermelon, mangoes, papaya, and strawberries, a specialty of the Baguio region. 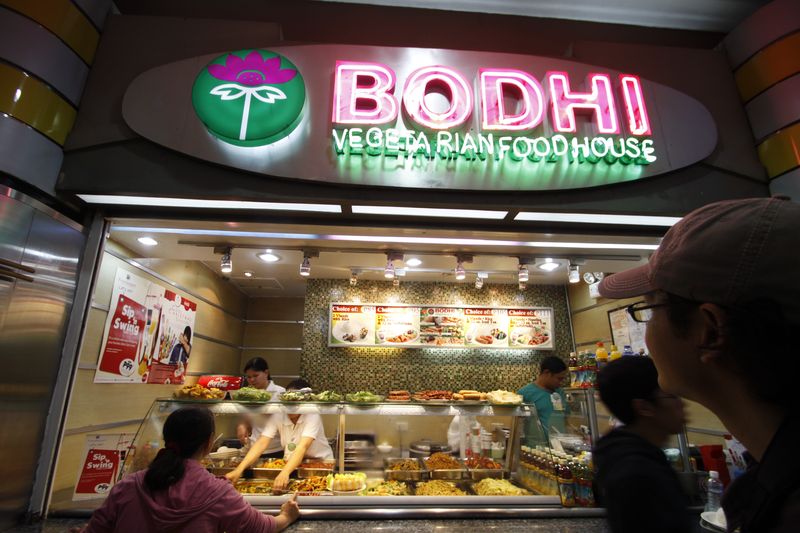 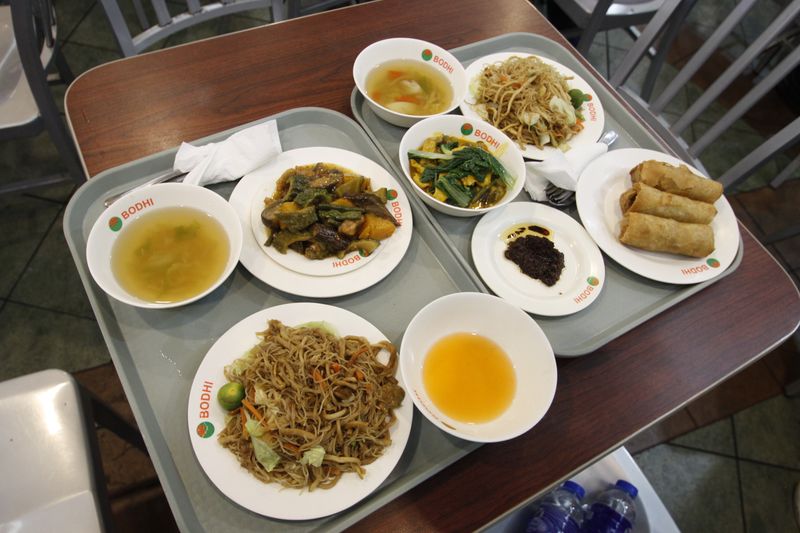 I was surprised at the vegetarian options as far as restaurants went. There is a place called Bodhi at the food court at the bottom level of SM Mall which served vegan versions of filipino dishes, a lot with some very convincing fake meat. There is another vegetarian restaurant on Session Road called Oh-My-Gulay! It is a little hard to find because the signs aren’t very good, and it is on the roof of a 5 story building and as far as I could tell only accessible by the stairs. The restaurant has two levels and a balcony, on one side looking across town to Burnham Park, and into a garden courtyard area with a fish pond on the other. The interior is really very interesting and worth the visit. The food was good, but the waitstaff seemed less than enthusiastic about working the day we were there, even though the restaurant was nearly empty. Also the bathrooms were a little sketchy and didn’t have any toilet paper. 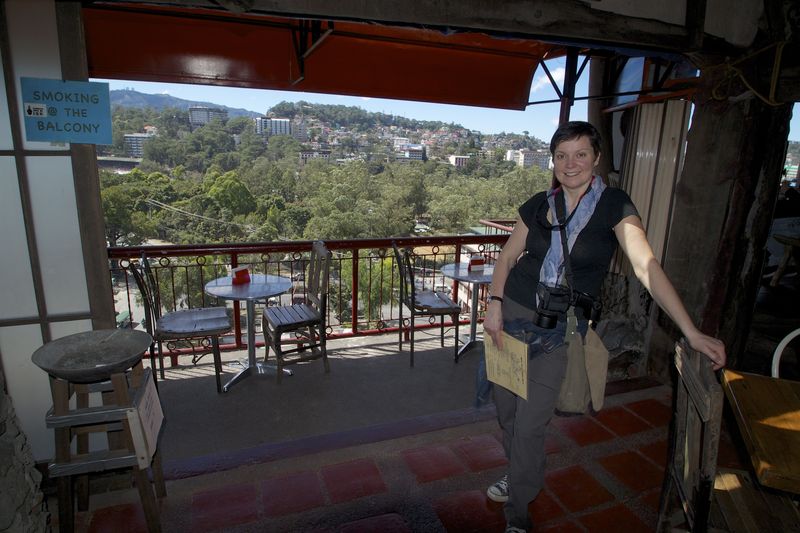 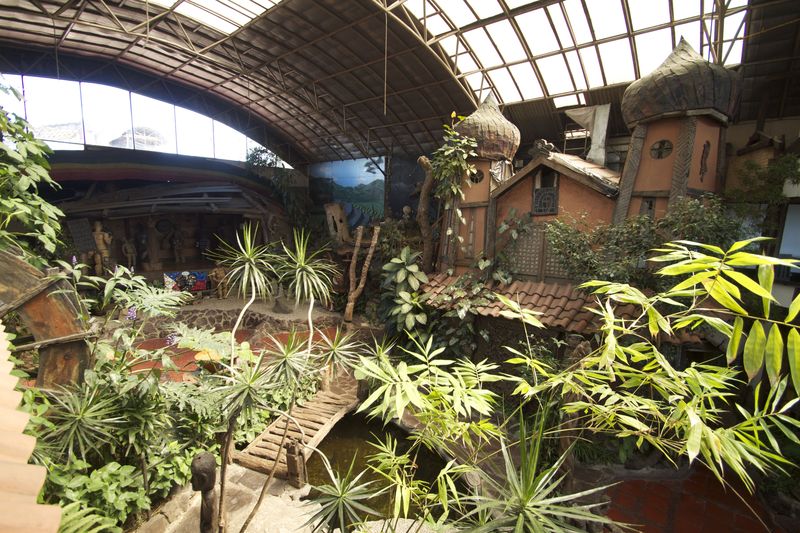 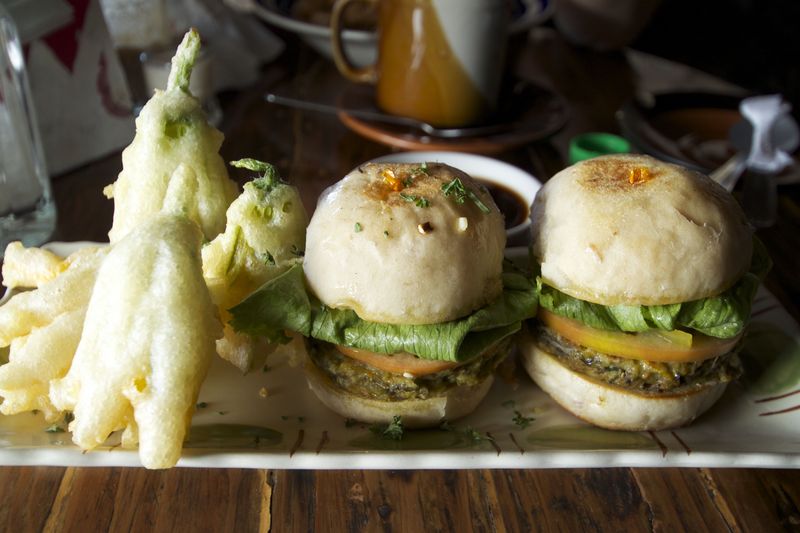 Don’t even bother going to Jollibee or Chow King; there is nothing at all to eat there, except maybe the fries at Jollibee if you are desperate. We shared a Super Halo-Halo at Chow King, because Katya wanted to try halo-halo and ube ice cream.

One of the Canadian nurses who knew we are vegan said that he saw some vegan sausages at the public market, which really surprised me, because we had been there, and didn’t see any. He showed me the picture he took on his iPhone. The sign actually said “Vigan” sausages, which in this case refers to a type of sausage made from garlic and pork that comes from the capital of the province of Ilocos Sur called Vigan. I think he really thought that they really were “vegan”, but i suspect the concept has yet to reach the filipino consciousness. 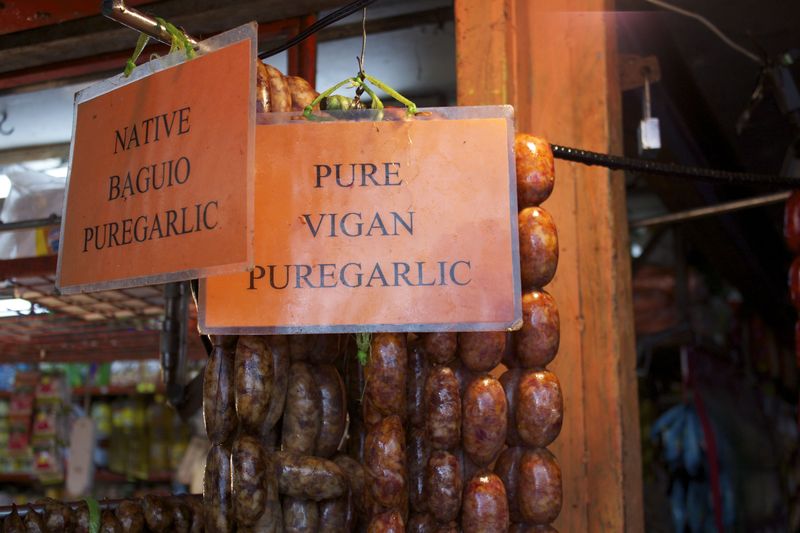 In the video Katya describes how to eat like a Filipino with a fork and spoon. The kitchens of filipino homes are often decorated with a giant wooden fork and spoon. Filipinos eat with a spoon in their right hand and a fork in their left, and push the food onto their spoon with their fork. They don’t use knives but use the edge of the spoon to cut food. This is possible because the meat is usually prepared in small pieces instead of big slabs, and also cooked very well-done. The cooking style probably evolved to avoid rare meat because bacterial contamination was common in the warm climate.

In 2006 in Quebec, a Filipino-Canadian boy attending Grade 2 at Lalande School in Montreal's Roxboro district was repeatedly reprimanded by a lunch monitor for eating with a fork and spoon at the same time:

The boy's mother met with her son's lunch monitor, Martine Bertrand, after she told him that his habit of eating his noodles with both a fork and a spoon was disgusting.

Maria Gallardo said she explained that the practice was a tradition in the Filipino community, but that Bertrand was unwilling to compromise.

When Gallardo tried to meet with the school's principal to address the situation, Normand Bergeron dismissed the request and said her son should learn to eat like other Canadians.

Ultimately, Quebec's Human Rights Tribunal ordered a Montreal-area school board and two of its employees to pay a total of $17,000 in damages to the family of the boy for their cultural insensitivity.

Posted at 08:09 PM in The Philippines Medical Mission | Permalink | Comments (0)