Pic of the Day: Dubside drops the base. 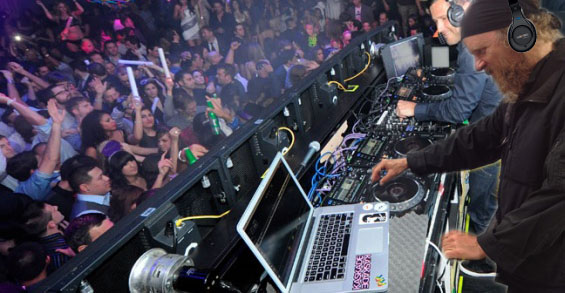 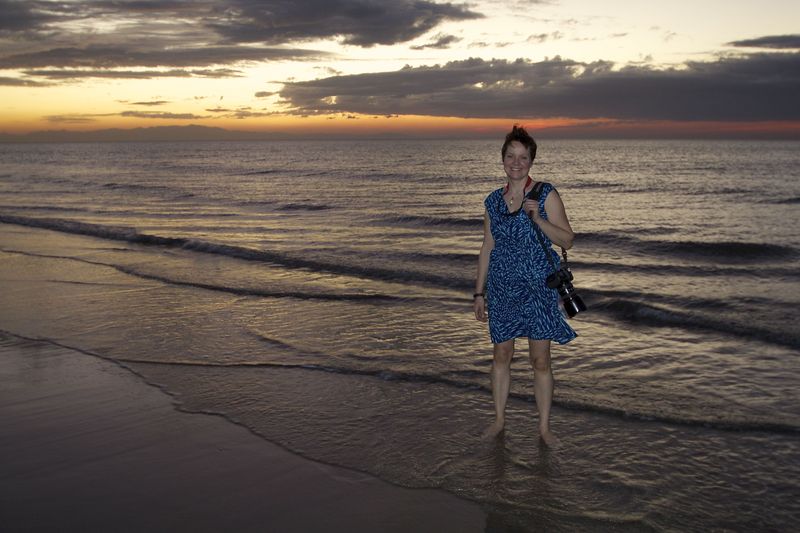 Katya on the beach in Pangasinan.

Between the two weeks we spent at Baguio General Hospital, we had a free weekend to relax and explore. Our group hired a couple vans to take us to a resort located on the beach in the neighboring province of Pangasinan. We left Friday evening right after work, driving only about an hour and a half down the winding mountain roads and through small villages in the lowlands to get to the water, the Philippine Sea. We arrived just as the sun was setting. After checking in and unloading our bags we gathered for drinks in the open air bar, which sat on the roof of a small building right on the beach. They had cold beer and buko (young coconuts) waiting for us, and we were treated to stunning views of the sun setting across the calm ocean.

The resort, called Happy Ripples, is owned by Shirley’s (the mission coordinator's) brother. It is right off the main road that runs along the shore, just north of the small town of San Fabian. Besides the beach, it offered clean air-conditioned rooms with showers, a pool, karaoke, and massage services that went on all day long. You had to get your reservation in early because everyone in the group wanted at least one massage a day and I think some people were able to get in two. Katya and I were probably the last people to sign up and we had to schedule for the leftover spots that started at 9 in the morning. Personally, I don’t understand the attraction of having a massage. I can name at least a couple more things I find more relaxing than a massage (that don't involve drugs) including sitting in a natural hot spring after a few days kayaking in the Canadian wilderness and savasana after a good yoga session. 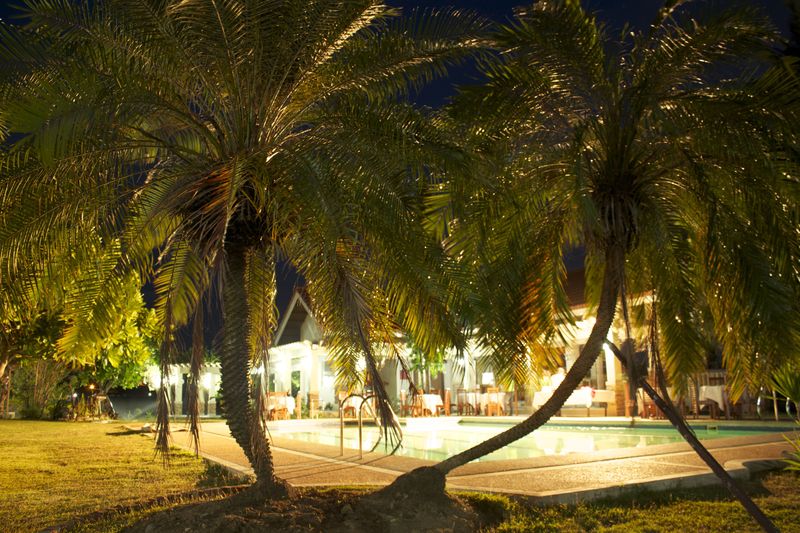 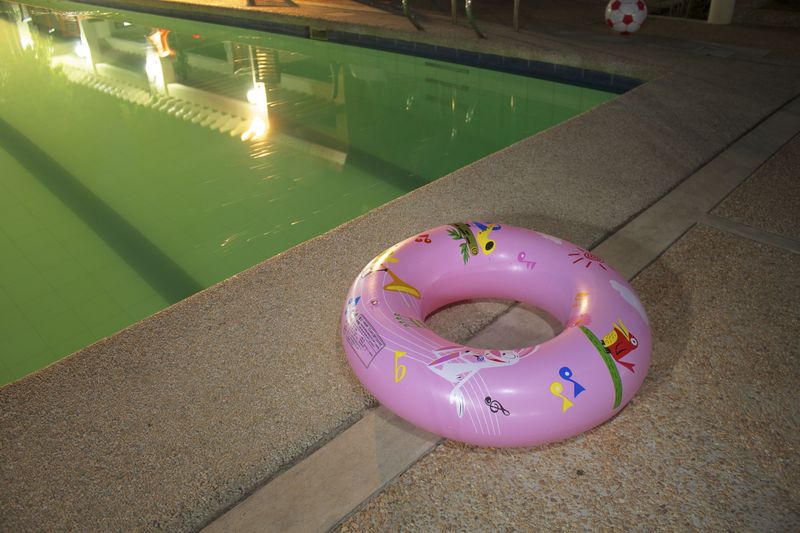 The warmth of the lowlands was a welcome change from cool weather in Baguio, where I would often put on a fleece jacket to walk to work in the morning. Swimming in the ocean was a real treat too-- as warm as bathwater. A few of us including Katya couldn’t wait until the morning to take a dip. 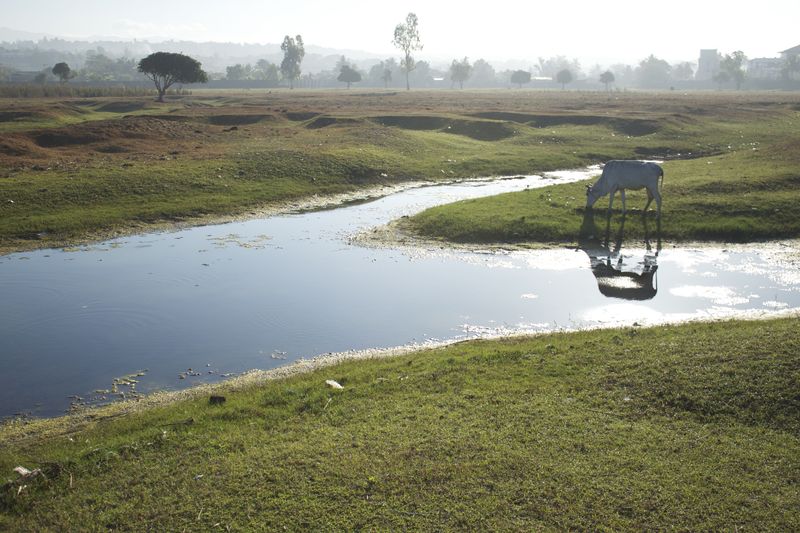 Cattle graze around the brackish pools just above the beach.

Katya and I wanted to get up early to photograph the fishermen on the shore. The beach was wide and flat. Although the tidal range wasn’t more than a meter, there was a noticeable high water line where all the plastic garbage collected. Shoes were a common finding, and Katya ended up with a impressive photographic series of old shoes. 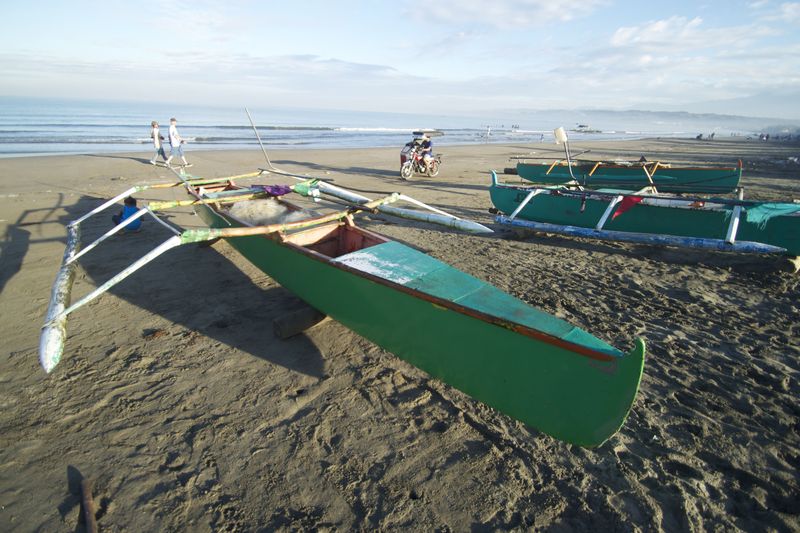 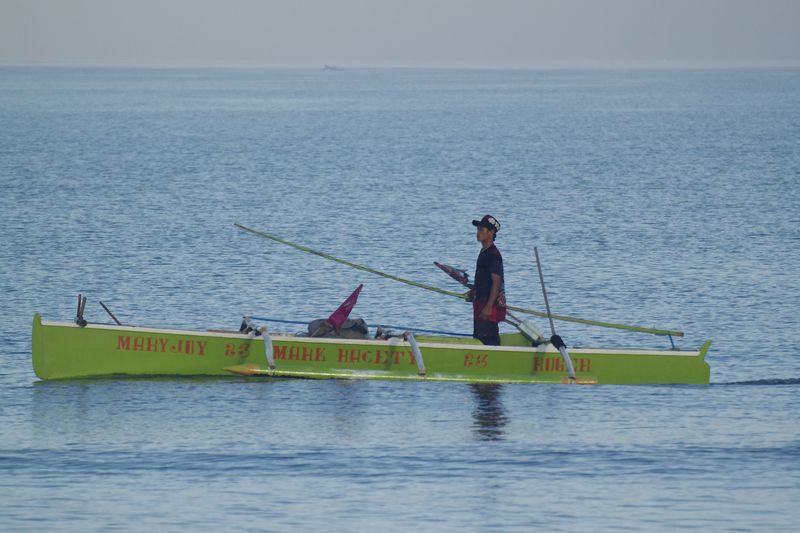 The fishermen here use small boats known as bancas, which are traditional filipino outrigger canoes. They range in size from 10 ft long one person human-powered canoes to boats 45 ft long with inboard diesel engines that can carry several people. They all follow the same basic trimaran design and wood construction. The bottom of the main hull is carved out of a large log, and the sides are constructed from plywood. Bamboo is used for the for the amas (outriggers) as well as the akas (the parts of the frame that connect the main hull to the outriggers). One boatman described to me how they would heat the bamboo under a fire to bend the ends of the large akas. Synthetic line is used to lash the frame and the amas together. We saw a few bancas under construction on the beach and it appears that they use an epoxy compound to seal the joints in the hull. Many fishermen build their own bancas, using old diesel engines and scavenged parts. Despite strong breezes and good sailing conditions, we never saw any boats with sail rigs. 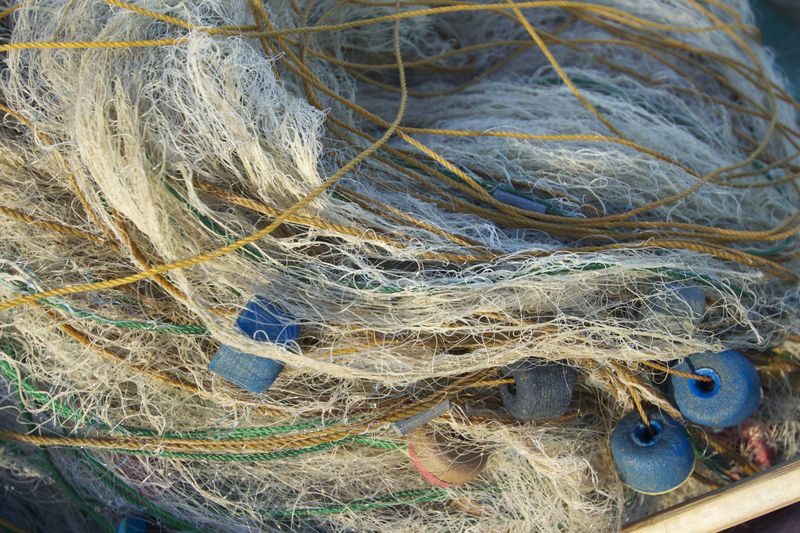 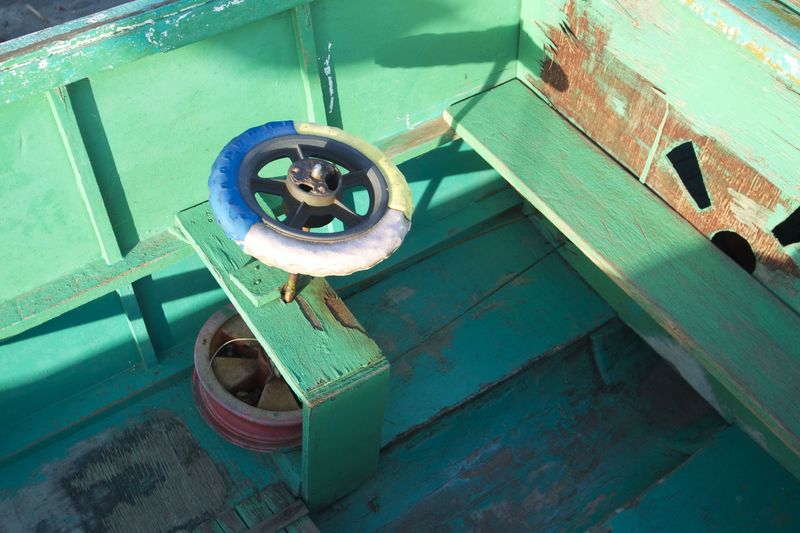 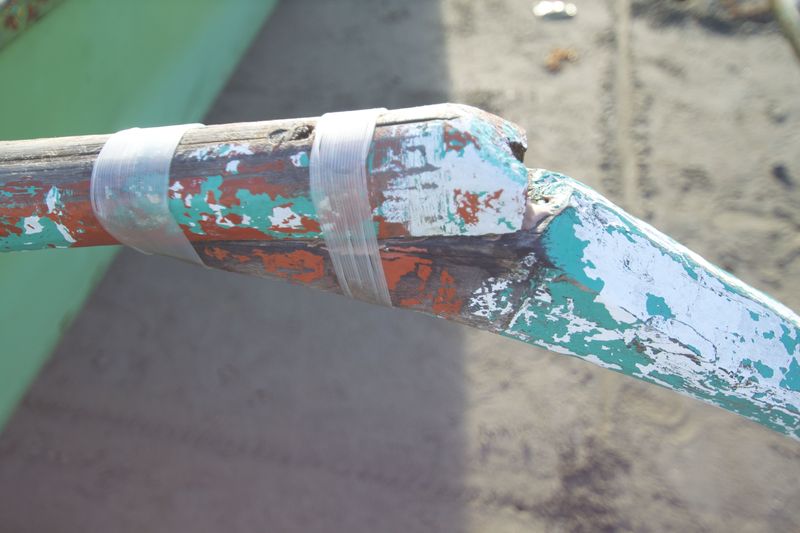 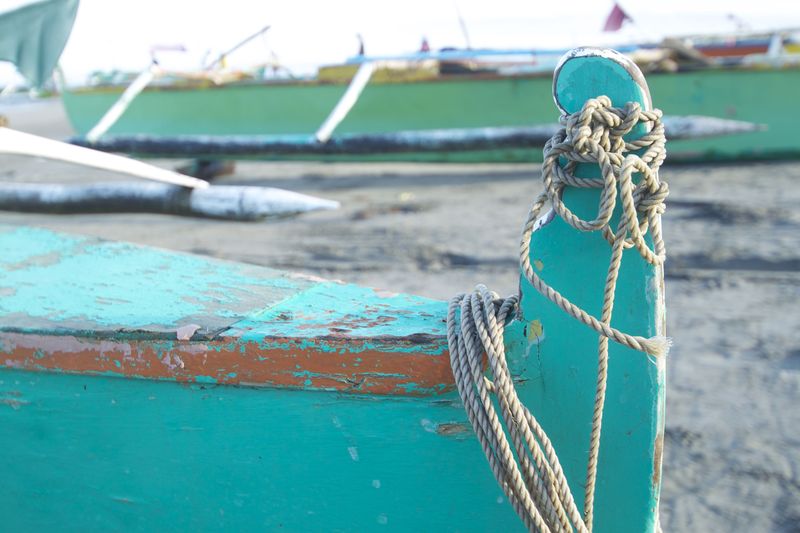 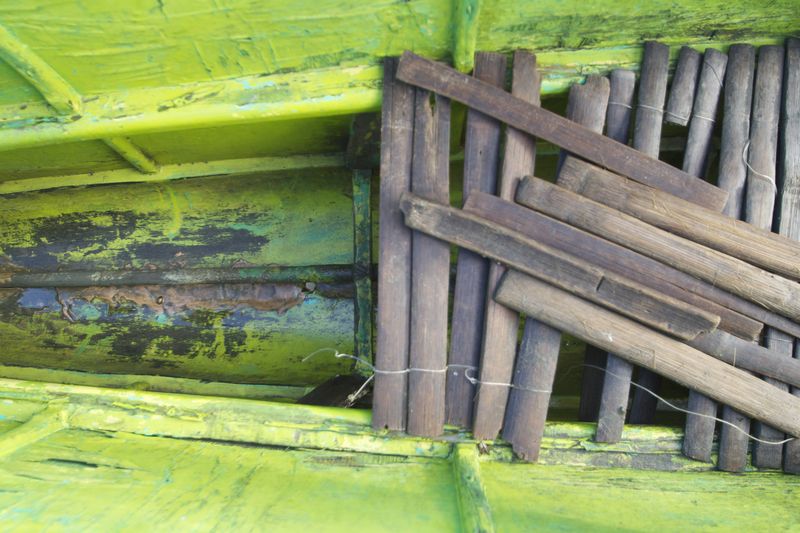 In Pangasinan the fishermen would haul their bancas onto shore when not in use. In El Nido they would leave them anchored in the water at night, in water so shallow you could wade out to them from the beach, When the tide went out they would be left high and dry.

We saw some fishermen pulling in a net that was cast just off shore, and one who had come from his banca. His catch looked pretty meager -- just a few small silvery fish. Despite all the fishing activity on the water and on the shore that day, we really didn’t see many fish, probably because this fishery is depleted. 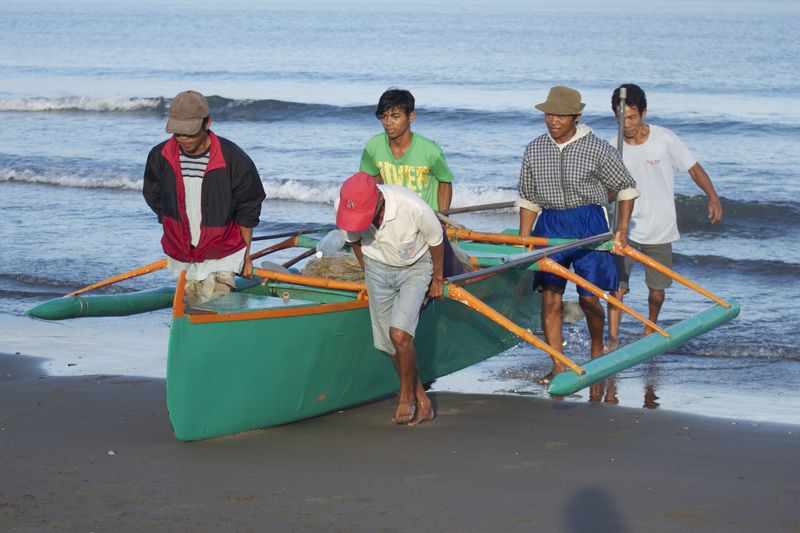 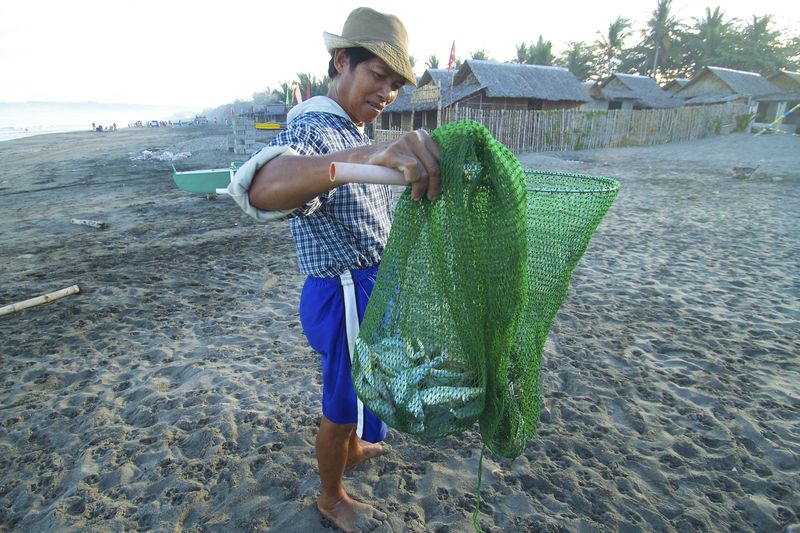 With 7,100 islands, the Philippines has the world's longest discontinuous coastline. Over a million Filipinos are engaged in marine fishing, the vast majority using traditional methods such as net fishing from small boats. Commercial fishing operations from Japan, Australia, Canada and the United States have a large presence in the waters around the Philippines. They use industrial fishing methods such as large-scale trawling and purse seiners that clean the open ocean of fish. This has resulted in fewer fish along the coastal areas where subsistence fishermen live. As the stocks of fish decline, coastal fishermen have to venture farther out to sea to find fish. This requires a greater investment in fuel and maintenance, to the point where they can’t afford to eat what they catch, but instead have to sell it to meet their expenses. The extra time they spend chasing the fish farther out to sea also means that they have less time to spend on supplemental farming at home.

One tragic outcome of the increasing scarcity affecting subsistence fishermen is that some have turned to dynamite fishing -- a more cost effective, although extremely destructive, method. The way it works is that a fisherman throws dynamite into the water, creating an underwater explosion which kills all the sea life in the immediate vicinity. Many dead fish sink to the bottom, but some of the dead and stunned fish float to the top where they are easily skimmed off the surface.This is a common method used to capture tropical reef fish for aquariums.

To make matters worse, even more people are migrating away from economically depressed inland areas and toward coastal areas, increasing the number of people dependent on fishing. 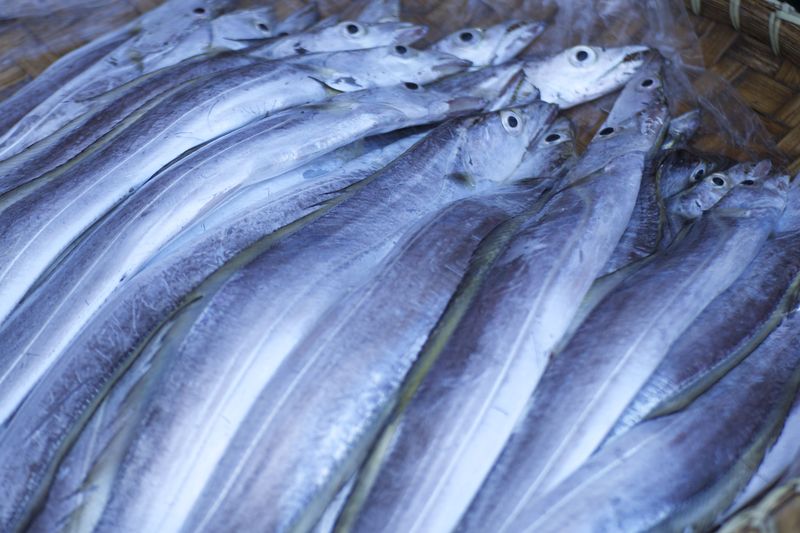 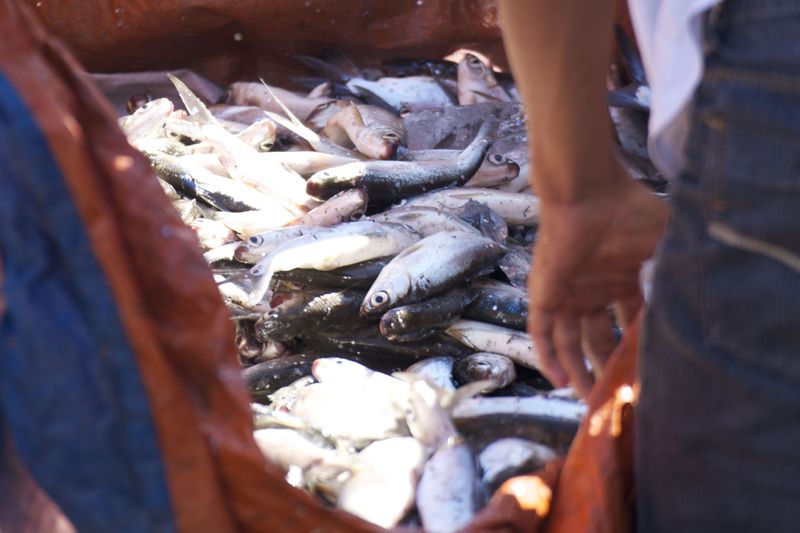 Fish for sale at Dagupan market.

National Geographic has brought attention to the problem of overfishing in a short presentation which I highly recommend watching called “Still Waters”. The case they present is that commercial fishing operations of the rich countries are basically taking fish out of the mouths of subsistence fishermen in poor countries. 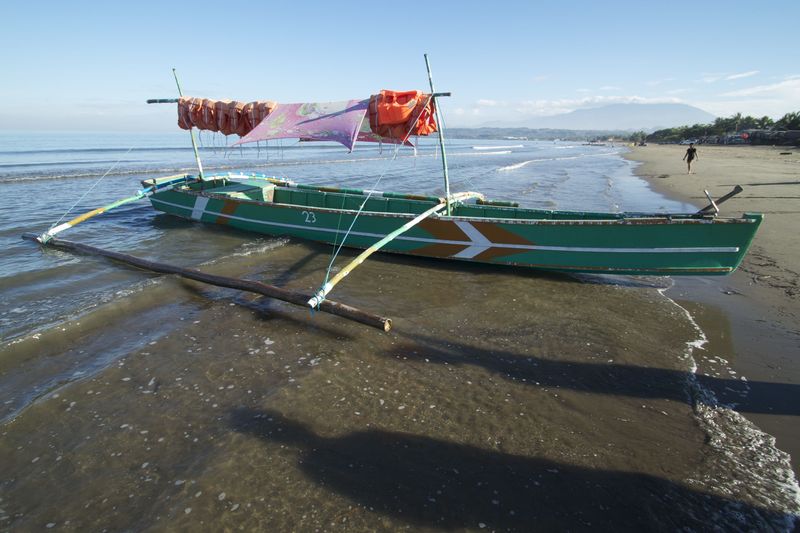 A banca re-purposed for tourism, complete with lifejackets and Hello Kitty sun shade.

Some fishermen have turned to tourism to make a living. We saw a couple bancas for rent, inlcuding one that would sit on the beach in front of Happy Ripples waiting for business. For about $1 per person they would take you out on the banca for an hour. In addition to the boat’s skipper, a small group of vendors would show up at the beach in front of the resort, patiently waiting and hoping to sell their handicrafts.

Posted at 11:05 PM in The Philippines Medical Mission | Permalink | Comments (0)