Who Owns This Beach, Anyway? Fighting for Shellfish on Washington's Public Tidelands

Harvesting Oysters for Dummies from Baby Seal Films on Vimeo.

I've actually only foraged for oysters a couple times prior to making this video. The original idea was to just record ourselves gathering oysters but it turned out to look more like a public service announcement. I'm certainly no foraging expert and can barely shuck an oyster to save my life, although through the magic of video editing, we make it look easy! So that's where the "for DUMMIES" part of the title came from. More accurately, it probably should have been titled  "Harvesting Oysters, by Dummies". 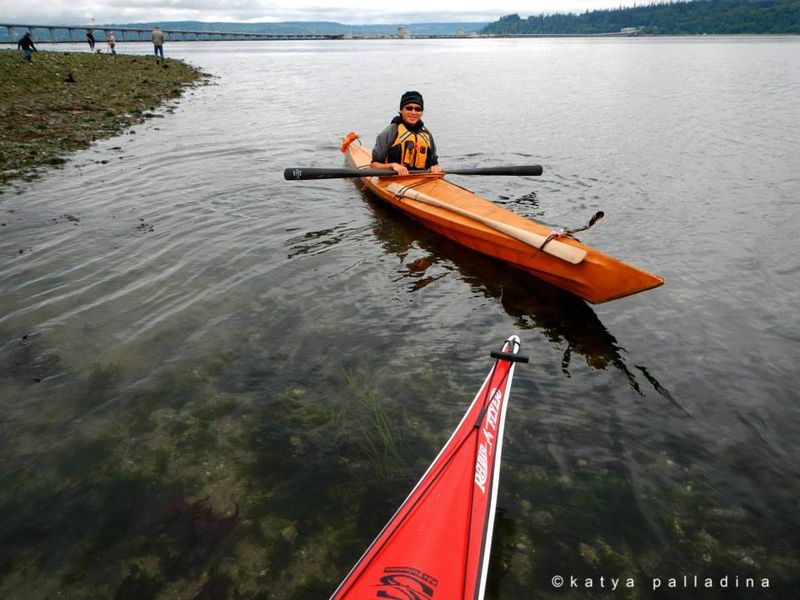 Kayaking at the entrance to Hood Canal, extreme low tide. 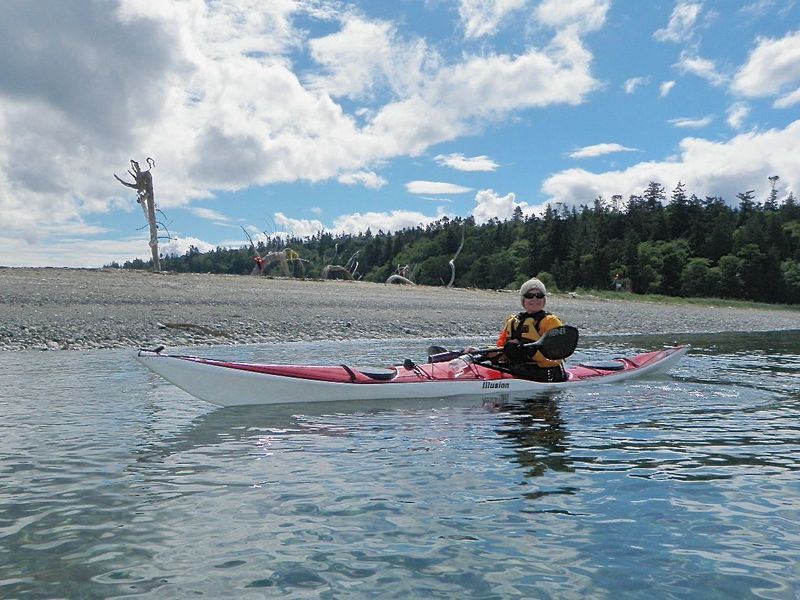 Katya in front of "The Dragon", a sculpture of driftwood and found objects, at Point Hannon.

We actually almost scrapped the entire project because were confronted by some locals at Hood Head who told us we weren't supposed to be gathering oysters there. While Katya and I were scraping oysters off the rocks a man approached us and yelled, "Hey, don't you guys know oyster season is over?" I told him that actually it WASN'T over, and that we knew for a fact that this particular beach was open. He said, no, it WAS over, and this beach was closed, and also asked if we had a license. I said that I sure did, and that it was in my pocket. "Well you pull it out and show me where it says on there that this beach is open!" I asked Katya to look up the harvest rules and beach closures on her iPhone, but before she could he just walked away. Later, another man approached us and said, "We told you guys that oyster season is over! You need to put those oysters back right now! It's Jefferson County regulations." I said he was wrong and that he had no idea what he was talking about.

We finally pulled up the beach closures on the Department of Fish and Wildlife site and confirmed that oyster season, and specifically this beach, Point Hannon, is open year-round. We walked over to these two guys to where they had planted clam seed that morning. The man I approached refused to look at the information. "I don't need to look at no computer!" He yelled. "I haven't been on the internet my whole life anyway."

When he saw Katya pointing her camera at him he yelled at her to stop. She did immediately when it looked like he was going to throw a bucket at her. 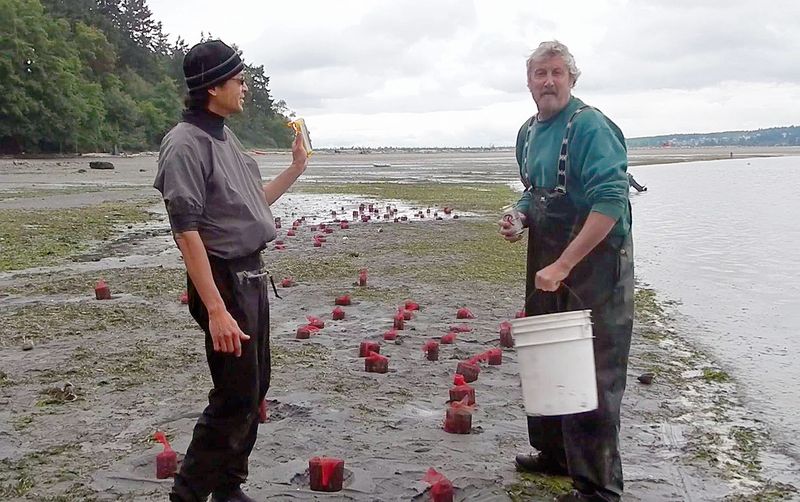 Look at the RAGE in this guy's eyes! Your old LIES don't stand a chance against the POWER OF THE INTERNET, buddy!

They declined to be interviewed on camera (to put it mildly). The other man said that they owned property on this beach and had taken great care to ensure the health of the shellfish here and in fact were planting clam seed at the time. "I have watched the public rape and pillage this beach," he said.

"You mean by harvesting shellfish?" I asked, and he said, "Yes."  He said that because of all the effort they had put into protecting and maintaining the beach, "We basically own this beach."

Oh, OK. I think I get it now. You guys don't want people to harvest on a publicly-owned beach, because they take all the shellfish away. But it's OK for YOU to do it.

After some discussion, he basically admitted that it was a public beach, and that they tell people that it is closed to keep them from "raping and pillaging" it. So they can save the shellfish -- for themselves! Later he said he had no beef with us, because we were just doing our best to follow the rules, unlike a lot of other people. I also found it very interesting that he recommended we go foraging on the other side of Hood Head where there are some very good oyster beds -- on tidelands that I know for sure are privately owned.

I tell this story as a warning. You need to know which tidelands are public and which are private. You need to know exactly where the boundaries are. Public tide land only includes the beach below the high mean water line. Local fishermen and waterfront property owners will challenge you, ask to see your license, and will LIE to you about boundaries, the season, and your right to harvest in any particular area or time to protect their own interests. Be prepared to defend yourself from aggressive locals by having the right information. 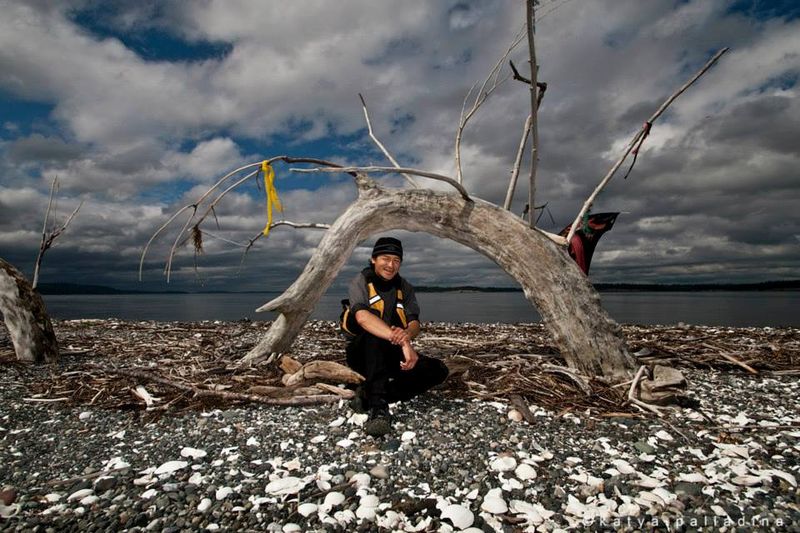 Sitting underneath The Dragon at Point Hannon. 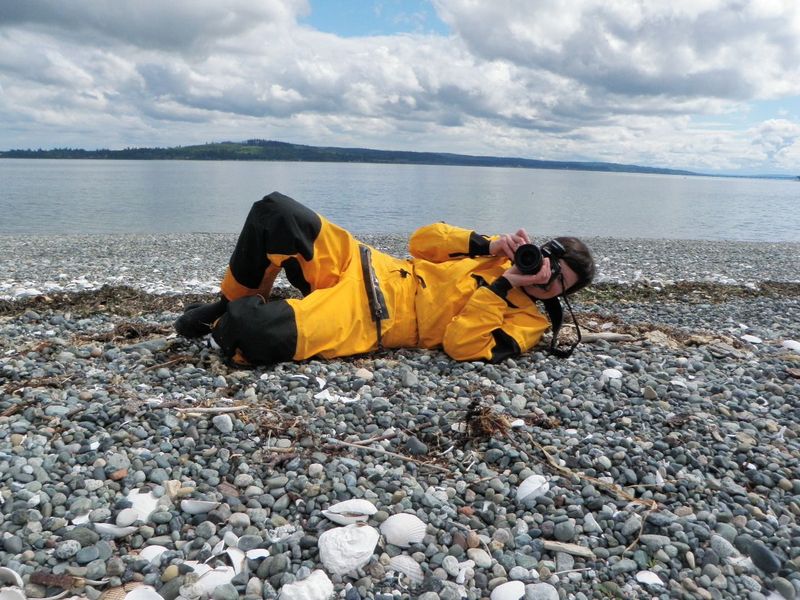 These confrontations really raise the whole issue of private ownership versus public access to waterfront land. All tidelands in Washington State used to be public. Between 1889 and 1890 the Washington State legislature authorized the sale of public tidelands to private individuals to raise revenue. Sixty percent of Washington's public beaches were sold before the practice was discontinued in 1971. Now, Washington State actually is one of the most restrictive states in the country when it comes to access to public beaches. In Texas, for instance, public access to all Gulf Coast beaches is not just the law, it is a constitutional right. Cities and counties along the coast are required to adopt laws to protect the public's beach access rights. There are actually 1,300 miles of public beach in Washington State, but you can only get to much of it by boat, because it is entirely surrounded by private property.

It's true that if everyone went out and harvested shellfish without limit, the stocks of wild shellfish would be rapidly depleted. But private property owners like to use this argument to limit public access and keep the privilege of harvesting for themselves. I’ve only just begun foraging for shellfish around Puget Sound. Eventually I’d like to explore all of the designated harvesting beaches in the area. It gives me yet another reason to get out and paddle, with the added challenge of trying to arrive at my destination at the right time, when beaches are exposed at low tide.

My diet is normally entirely plant-based, but I will eat a small amount of wild foraged shellfish a few times a year. Oysters or mussels are simple organisms that are most likely not sentient and don’t feel pain. Harvesting them also poses very little environmental impact. Because they are filter feeders, oyster farming actually improves water quality. An annual shellfish and seaweed harvesting license costs a little over $16 when you purchase it online. Refer to the Washington State Department of Fish and Wildlife Harvest Rules. Mussels can be harvested from salt water year round, up to a limit of 10 lbs/day. 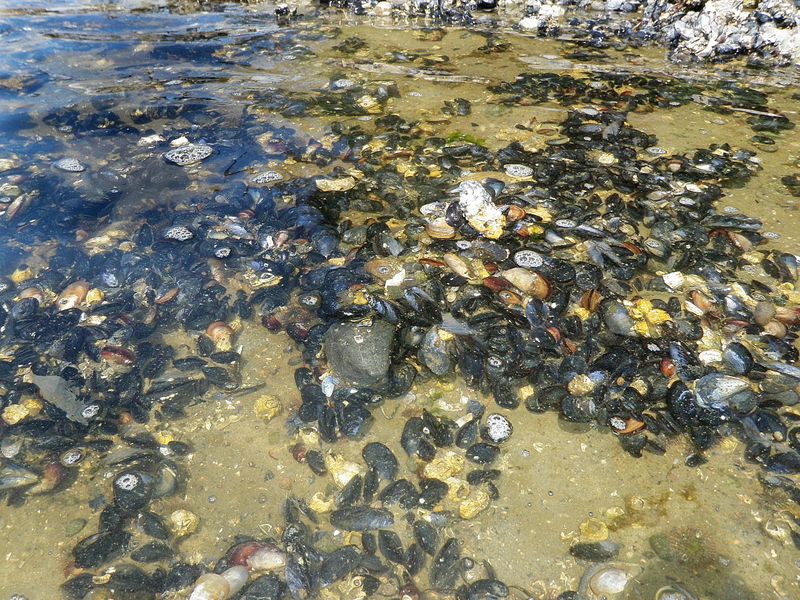 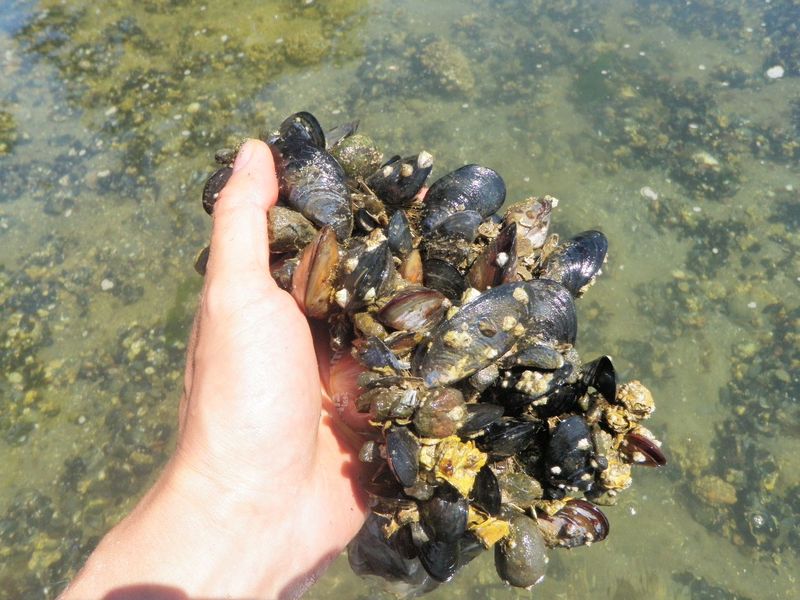 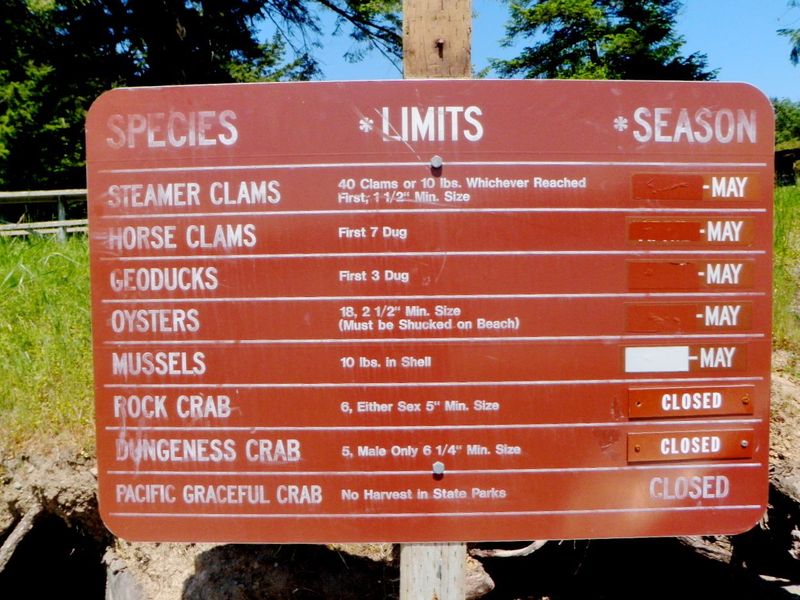 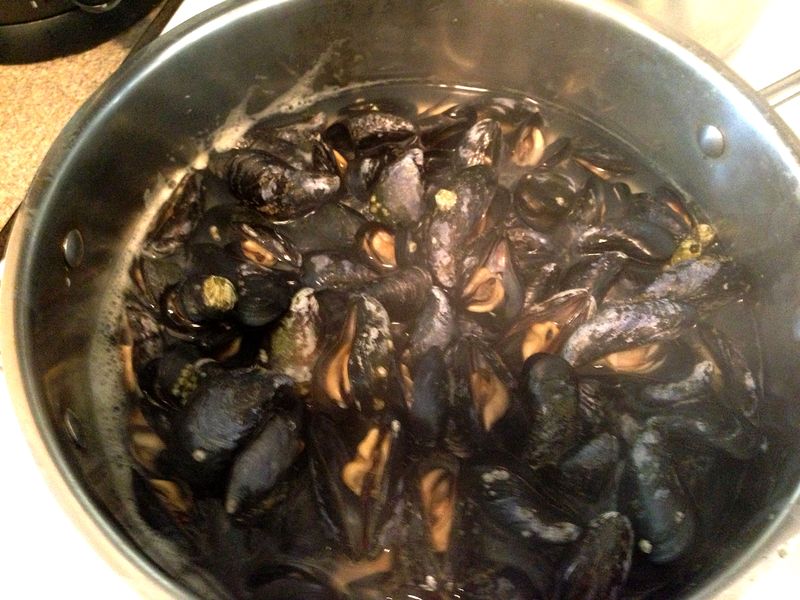 I also always refer to the Shellfish Safety Information site for beach closures due to pollution and biotoxins. Not surprisingly, the areas around Seattle and Tacoma are typically closed to shellfish harvesting due to pollution. Biotoxins such as the one that causes paralytic shellfish poisoning (PSP) can even occur in the San Juan Islands, despite the much colder water and strong currents. The risk of PSP varies depending on the species. Mussels accumulate the toxin faster than other species, so it acts as a good indicator species. Clams accumulate the toxin at much higher levels and take longer than mussels and oysters to clear the toxin. Concentrations of PSP usually start going down in October and November, but clams can still be toxic an entire year after an algae bloom. This is important to know because some beaches on the Department of Health map appear to be closed (indicated by the red color), but they are actually only closed to clams and are still open for mussels and oysters. Hope Island is one of my favorite destinations in the South Sound. It has pristine beaches but is easily accessible from Boston Harbor north of Olympia. I discovered yesterday that it is also a good site for finding mussels. Beds of mussels are located on the south east gravel beach right next to the entrance to the park. These are the smaller Foolish mussels (Mytilus trossulus), and only grow to 3 inches long, as compared to the larger California mussels (Mytilus californianus) you find on the coast which grows to 6 inches. 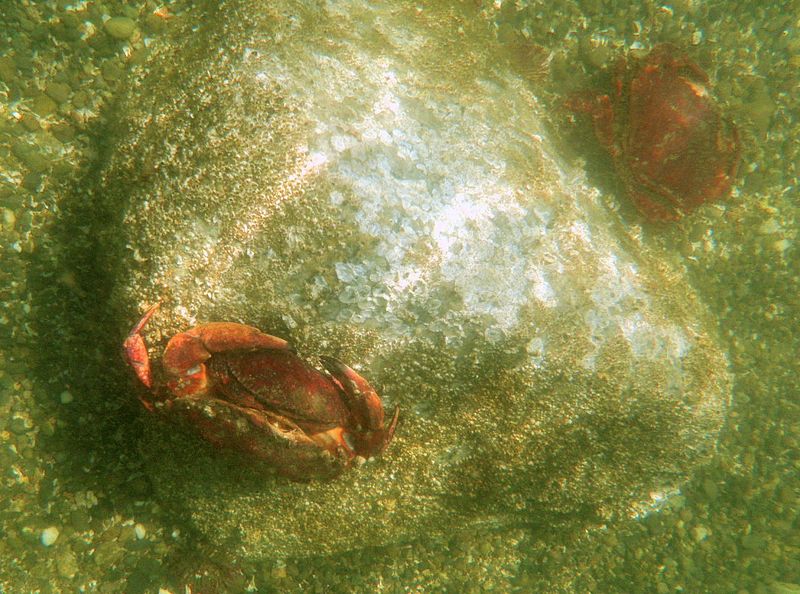 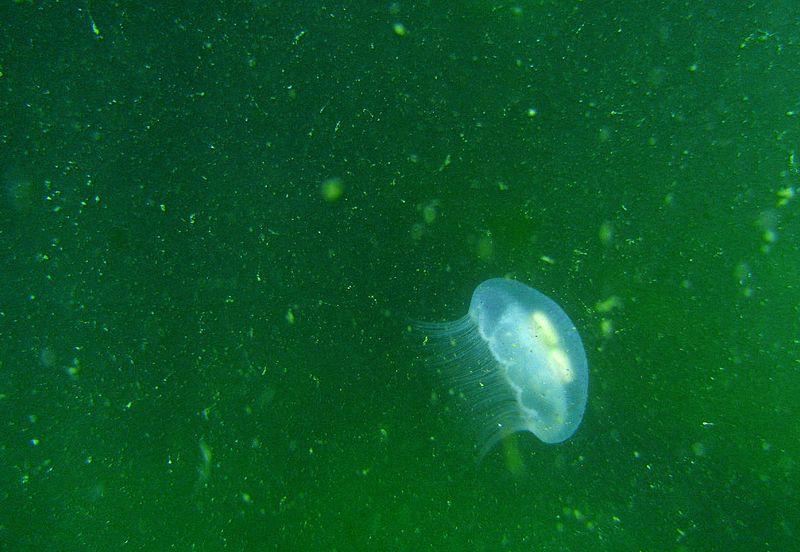 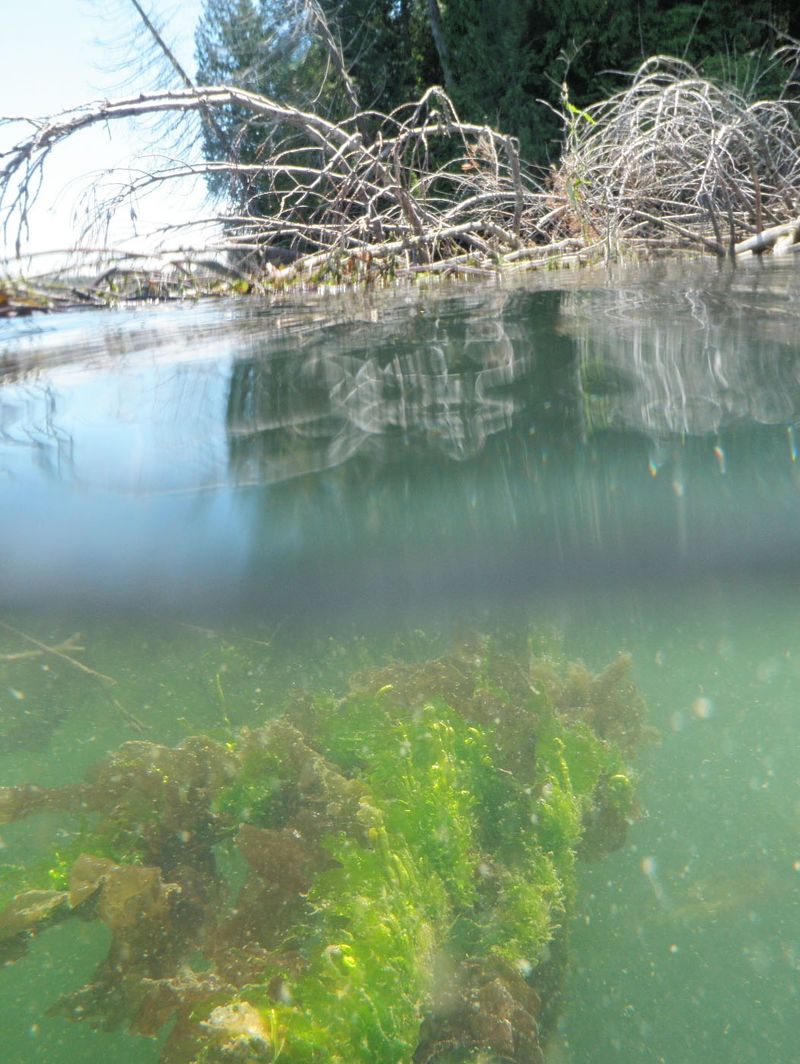 The distance to Hope Island is 2.85 nm, 7.11 nm round trip including circumnavigation of the Island.

Before going, check the currents in Dana Passage.

SUPping at the Northwest Paddling Festival 2013

If there is one take away message from the Northwest Paddling Festival this year, it’s that stand-up paddle boards are hotter than ever! The variety seems to be growing, with more manufacturers joining the game and coming up with more designs, including the faster racing displacement-type hulls with the piercing bows, and inflatables. Prices have gone up too. High end, lightweight and fast boards made out of exotic composites have pushed the upper limit way up. And it’s not as easy to find a decent, cheap, used SUP on Craigslist anymore either. 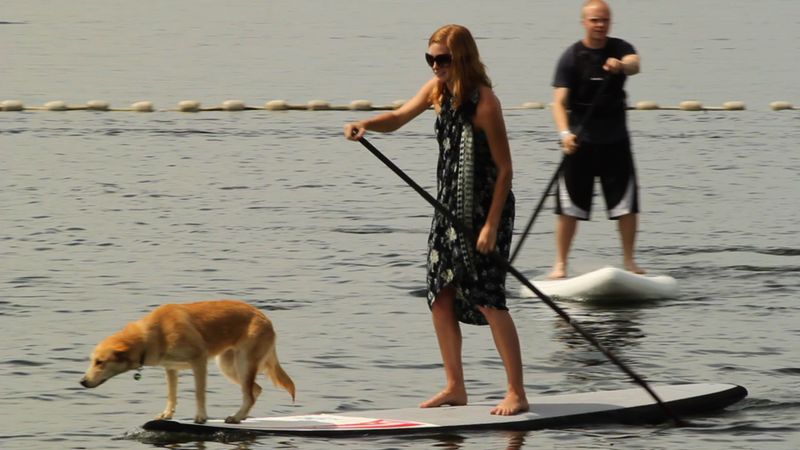 Everyone loves SUPs! They are great for dogs! And kids! Personally, I am attracted to the simplicity of being able to carry my board under my arm to the water and going for a quick paddle, without bothering to put on a sprayskirt and drysuit. Who needs it? Especially during an unseasonably warm day like we had at the Festival (82°F!) And as far as wearing a PFD goes, I got plenty of floatation leashed to my ankle! No need to practice wet-exits, complicated self-rescues, or learn how to roll. That makes it a lot easier to learn than kayaking (but also less satisfying, I might add). 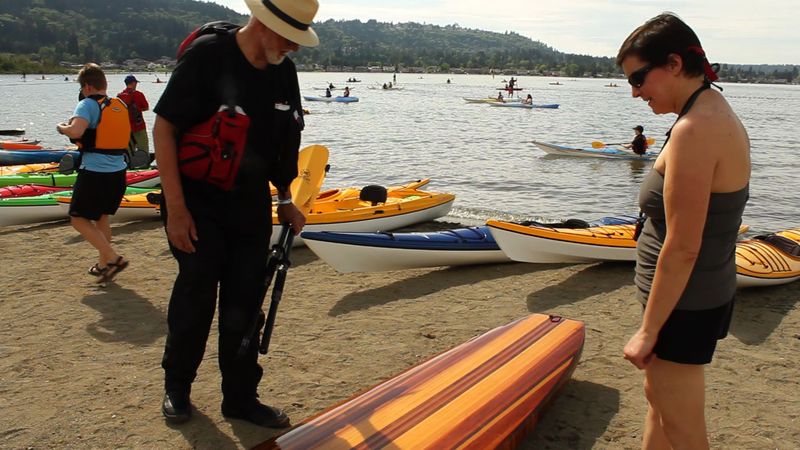 Still conspicuously absent were any homemade wooden paddleboards. Katya and I brought her cedar strip board and set it down on the beach to show it off. We were mostly fishing for compliments before we went off paddling in the lake, but it was also part of an experiment I wanted to conduct. I’ve developed a hypothesis, that certain people are simply blind to wooden boats. I think it falls outside of their perception. It's like they are presented with information that just doesn't fit into their worldview and they don't know what to do with it.

The blindest demographic of all seems to consist of attractive young women, especially ones wearing bikinis. They are like the kittens in the classic 1970 Blakemore and Cooper study, where scientists raised kittens in an experiemental environment consisting only of horizontal stripes. They kittens grew up completely blind to vertical lines and when removed from the experimental environment, kept running into chair legs. In contrast, older people are more likely to see and comment on a wooden board or kayak. The demographic most likely to stop and admire a wooden board appears to consist of older men, especially the ones with a lot of facial hair and a background in engineering. Our observations at the Paddling Festival provided overwhelming support for this hypothesis. If you happen to own a small wooden boat yourself, I challenge you to set it out on a crowded beach one day and see what happens for yourself. 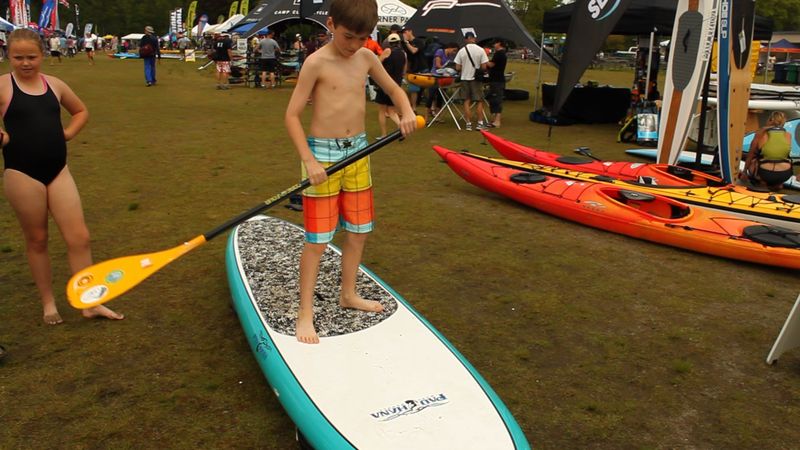