Behind the Scenes: The Making Of "Rodeo Hole!"

The idea for this video was to cover the Wenatchee River Festival. Whitewater rafting and kayaking can be spectacular and also easily visible from land, so I thought it would be a perfect subject for a new video. Since I had taken my first whitewater kayaking lessons on the Wenatchee three years ago, I knew the area and had a rough idea of what to expect. I wanted to hit the clinics, races, and especially the playboating competition, while shooting from the river bank and maybe from one of the bridges on highway 2. We had to find out where these events were going to be, and whether they could be accessible from land, and then take some time early in the day to scout out the area. I didn't arrive with a detailed plan but instead just showed up and started shooting, hoping to meet some interesting characters who are willing to talk on camera. We were very fortunate to run into Adam McKenney, owner of Leavenworth Mountain Sports. Our interview with him introduces the location and event.

The playboating competition was scheduled to be held at Rodeo Hole, but some kayakers were telling us that maybe conditions were better at another wave called Turkey Shoot. We had to wait until later in the day to know for sure. The guy who seemed to know the most about what was really going on was the festival shuttle driver. He would drive kayakers back and forth from the festival HQ in Riverside Park in Cashmere to event locations in a van with a trailer attached for kayaks. Coincidentally, the Professor Paddle Ball, another loosely organized whitewater kayaking festival, was scheduled for that weekend, so because of that and in addition to all the tourists who came out to go rafting on a beautiful, warm weekend, there were quite a few more people on the river than usual.

Unfortunately, the bank above Turkey Shoot is not easily accessible. To get to it you would have to park on a narrow shoulder of a busy freeway (which is illegal, by the way), then climb down a steep bank to the water. It is also visible from across the river on private land, but we were told that the view from there is not great, so we decided to just check out Rodeo Hole and wait and see if people would show up at the scheduled time for the competition.

After about 2:30 PM, a bunch of kayakers showed up. We assumed they were part of the Festival but they could have been with the Professor Paddle Ball or just a bunch of friends out on their own. We never really knew for sure. Some spectators showed up too but no one seemed to know anything about the competition. In any case they put on a good show and we got some great shots! 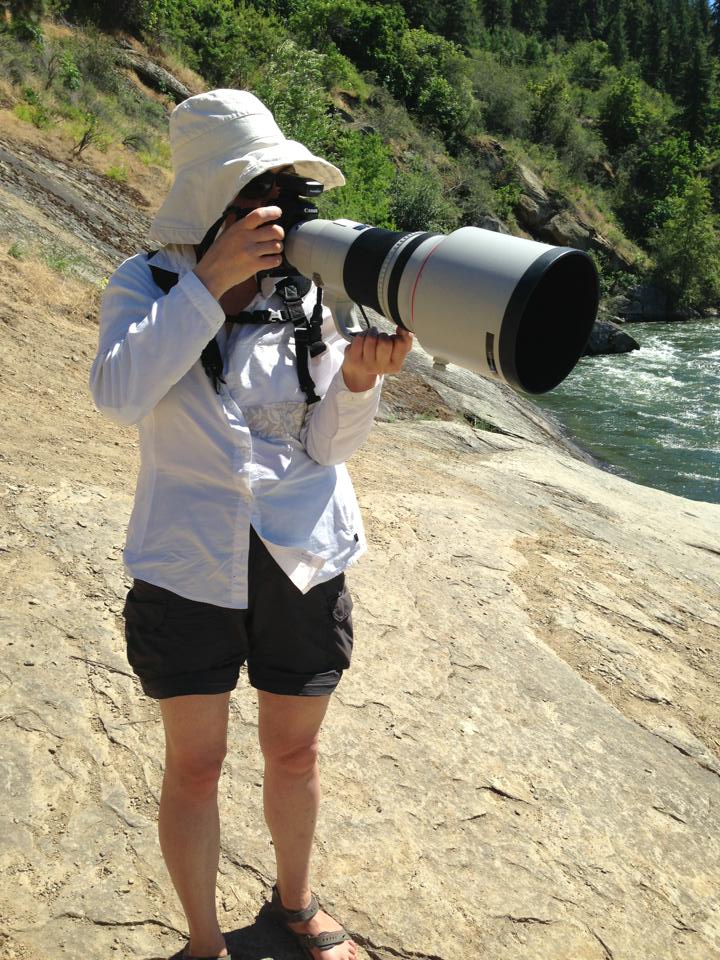 Above Rodeo Hole is a high sandstone bank that gives you a great view of the action. It was a little steep so Katya did not use a tripod. I used my monopod which was essential for stabilization with a long lens. We just happened to be shooting as the sunlight hit the water at the right angle. Earlier in the day the sun cast deep shadows over everyone's faces, but later on it reflected off the white foam, which acted like a big reflector. Looking through the viewfinder I was totally amazed with how well peoples' faces were illuminated!

I have converted totally to using DSLR for videography. Although I still love camcorders for their ease of use, fast autofocus, compactness, long battery life, and image stabilization, you really need the large sensor of a DSLR and interchangeable lenses to get that cinematic look, plus you can get them with both time lapse and slow motion capability. DSLRs are not really designed for video and have their own issues of course, such as poor image stabilization, slow and wandering autofocus, poor viewfinder, poor ergonomics, short battery life, and an alarming tendency to overheat during a long shoot. A DSLR kind of forces you to return to traditional cinematography: careful setting up of your shots, use of tripods, manual focus and manual exposure settings. Since everything is manual anyway, I can use old film lenses, such as Katya's Soviet-era prime lens that I like to use for interviews. 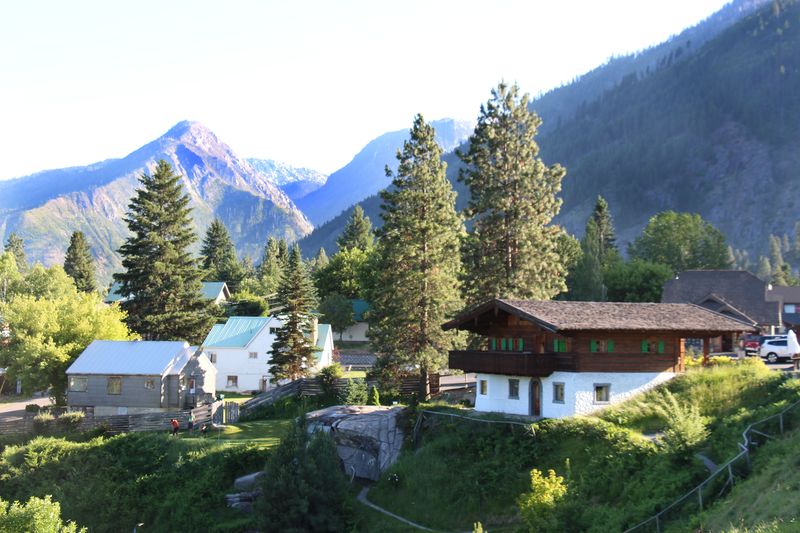 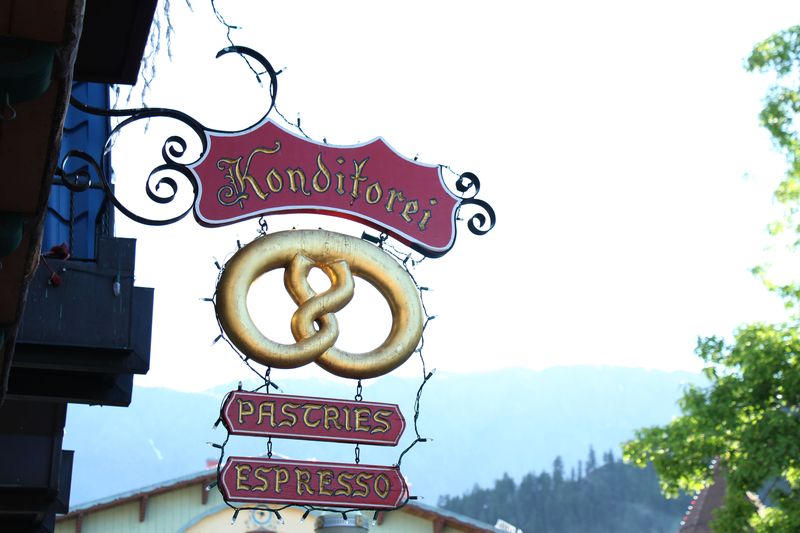 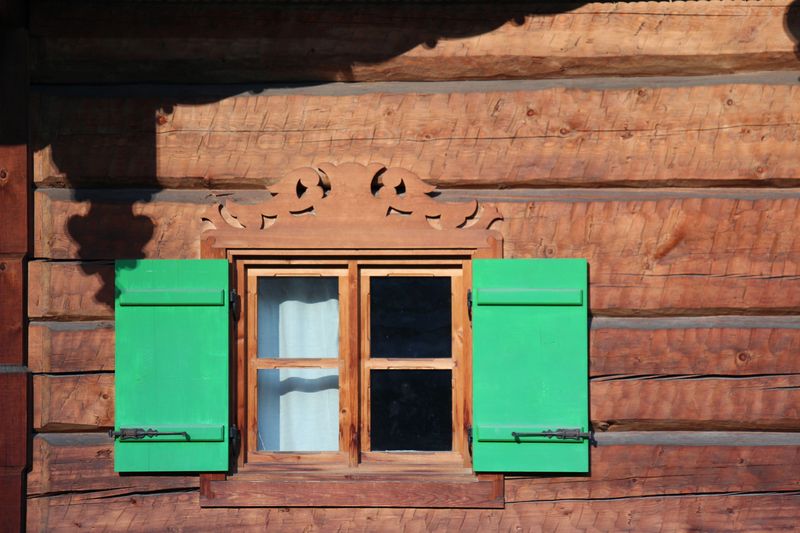 Leavenworth is a such a hoot: a town dressed up like an alpine Bavarian village, in the mountains of Washington! Even all the motels and gas stations are dressed up with painted wall murals, and all the signs for commercial enterprises such as Starbucks and the Union 76 are in a classic German typeface. Old guys in lederhosen stand around the central park and accordion music is constantly piped in around the main street. The horse-drawn carriage rides and festive atmosphere really reminds me of Disneyland. If you visit during the summer, I highly recommend stopping by the Icicle Brewing Company and, watching the theatrical presentation of The Sound of Music in their outdoor theater.

Interestingly, there are at least a couple other Bavarian villages in the USA, including Frankenmuth in Michigan and Helen, Georgia. As far as I know, though, they are not great whitewater destinations. 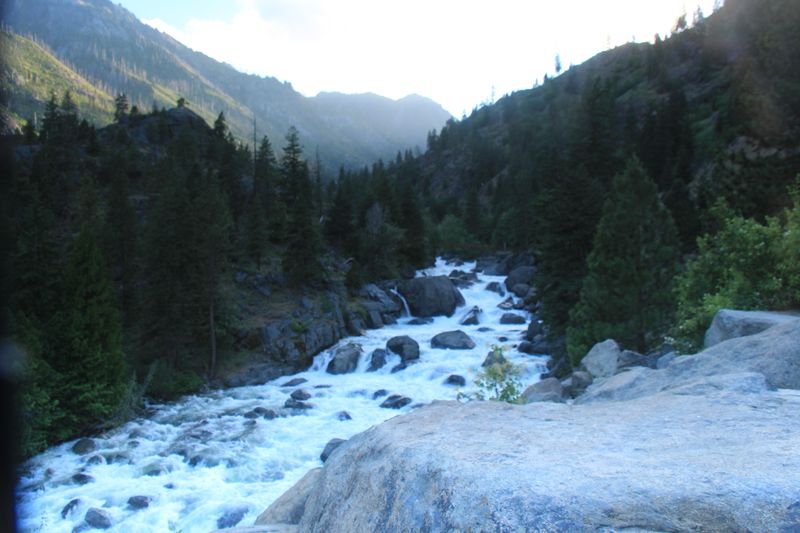 The Philippines: The Shrine of Our Lady of Manaoag

Our Lady of Manaoag from Baby Seal Films on Vimeo.

Our Lady of Manaoag is a miraculous church with a 400 year long history of renowned miracles and pious events. According to the legend of its origin centuries ago, a farmer was walking through a field when he heard a woman's voice. He looked around and saw the Virgin Mary with a rosary in her right hand and the child Jesus in her left, standing in a cloud veiling a treetop. The man fell to his knees before the apparition, who told him where she wanted her church to be located. He told people of his vision and soon a church was built on the spot where the lady appeared. A town quickly flourished around it, and was called “Manaoag”. 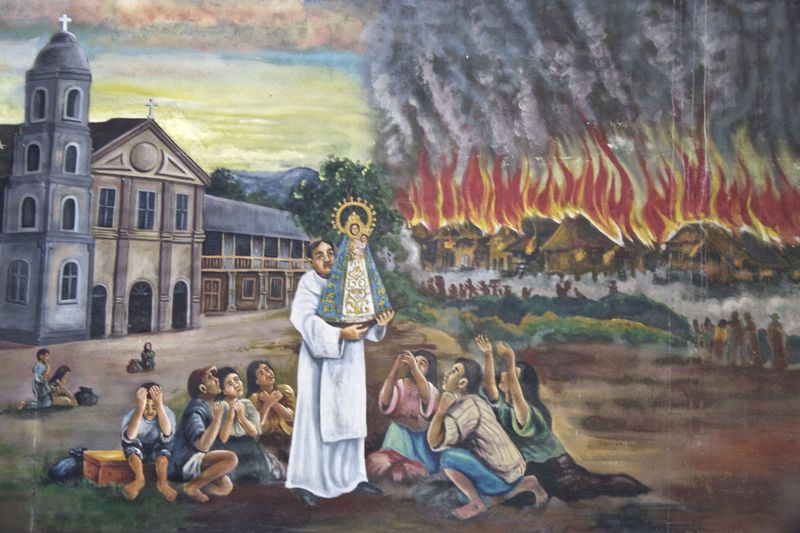 Painting depicting a fire that destroyed the village of Manaoag. 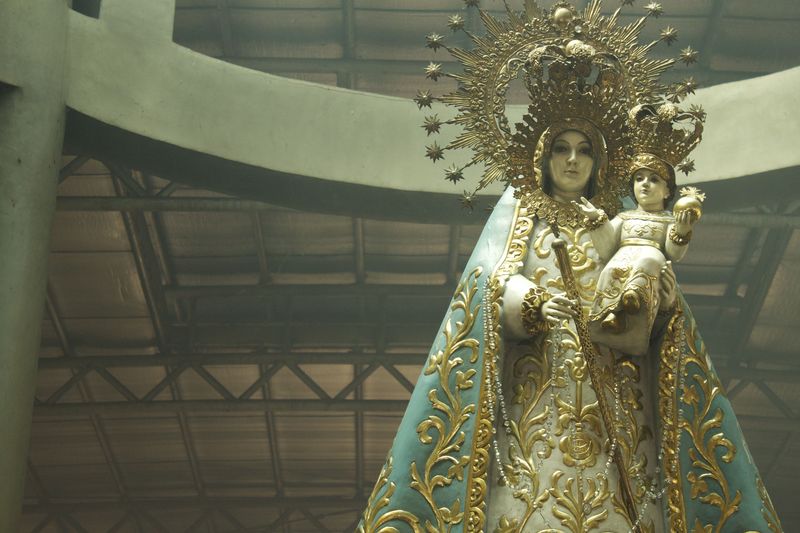 Replica of Our Lady of Manaoag, in the Candle Gallery.

"Our Lady of Manaoag" actually refers specifically to an  ivory statue of the Blessed Virgin Mary, brought from Spain via Acapulco in the early 17th century to the Philippines by Padre Juan de San Jacinto. Now located in the shrine in the church, the image is one of the most venerated Marian images in the country, and is thought by believers to possess healing powers as patroness of the sick, the helpless and the needy.

In the early days of Spanish colonization, animist mountain tribes attacked the village of Manaoag and set the buildings on fire with flaming arrows. Although the entire town was burned to the ground, the church was miraculously preserved. In 1898 revolutionaries burned the church down, but the image narrowly missed destruction, because it had been abandoned in a storage room behind the church. Similarly, during WWII the Japanese bombed and utterly destroyed the town, but the church remained intact (for the most part anyway: the plaza and façade were moderately damaged). A bomb fell right through the roof and landed on the sanctuary, but miraculously didn't explode. Six million Filipinos died in thel war, but the church was spared! 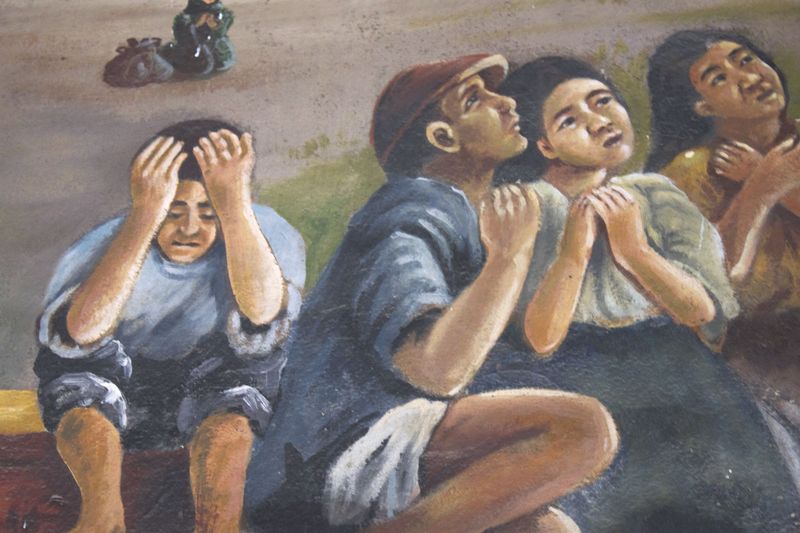 Detail from the fire painting.

Pope Benedict XVI granted the Shrine of Our Lady of Manaoag “a special bond of spiritual affinity through which the visitors of the Marian Shrine are assured of the same blessings of the Lord and the entitlement to a plenary indulgence equal to that received when visiting a papal basilica in Rome.”

People come from all over the country on pilgrimages to Manaoag. Religion in this country is alive. Churches are crowded and relics are adored. People will stand in line for a couple hours just to get a chance to touch the gown of the bejeweled statue of the Blessed Virgin Mary, Our Lady of Manaoag. 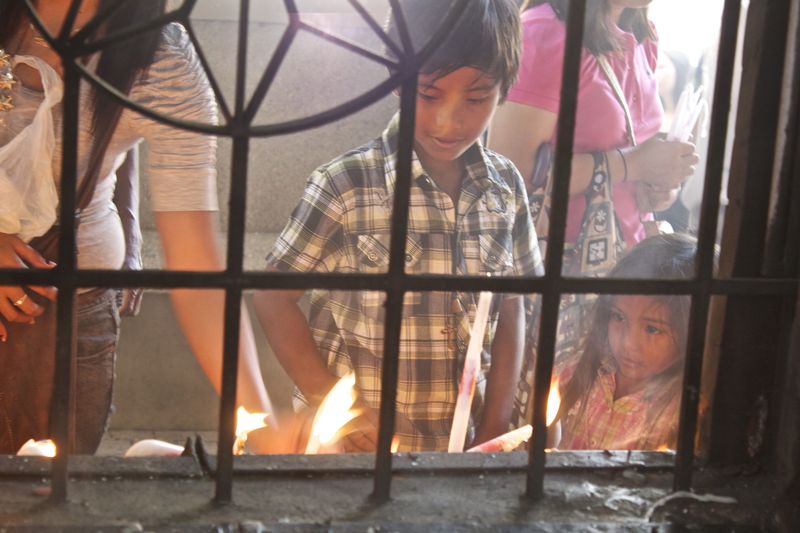 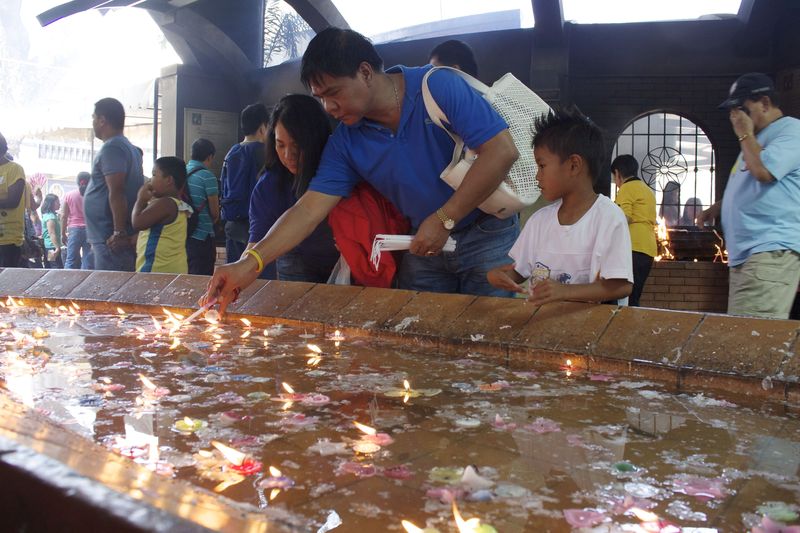 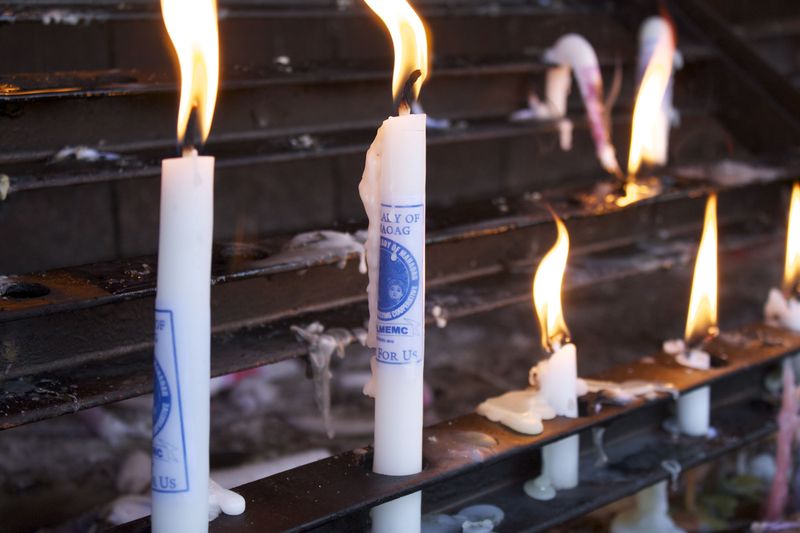 In the back of the church is another building called the Candle Gallery. You can choose to purchase from a wide variety of candles from one of the church run candle stands. Katya had been stung earlier in the morning by a jellyfish and was also feeling a bit run down from a cold, so she lighted a candle and recited the recommended prayer for good health, which was posted on the wall. On the van ride back up to Baguio, she suffered a severe bout of nausea and retching, which was followed by the worst migraine headache in her life, along with fevers and chills that lasted through the night. Although feeling quite worn out the next morning, her cold was gone! (Well, maybe not completely, but much better). If your belief is strong, you will experience miracles! 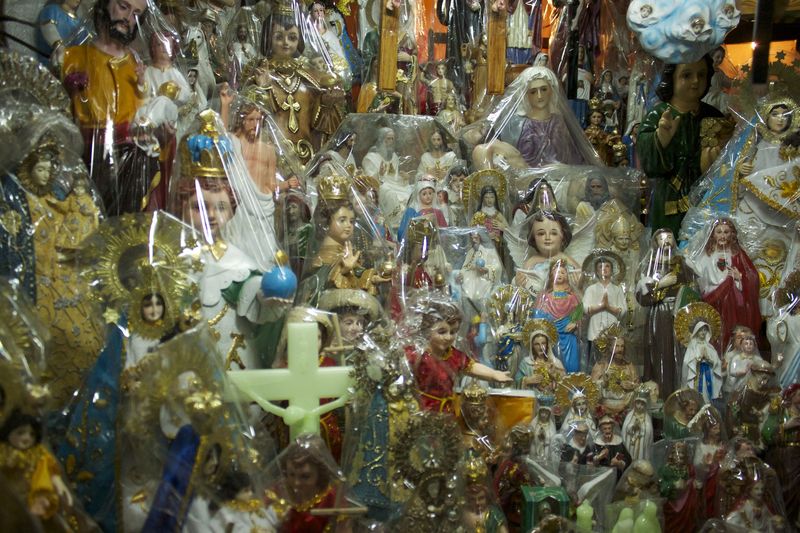 The Catholic Pantheon: a multitude of plastic statues for sale in the market surrounding the church.

Posted at 12:12 AM in The Philippines Medical Mission | Permalink | Comments (1)