The Dash Point Pirate
Home Archives Profile Subscribe
Indian Guide Tom Sewid Will Save You From Being Eaten By Bears
Tribal Canoe Journey 2013: The Resurrection Of Northwest Coast Canoe Culture Offers A Glimpse Back Through Time

The aboriginal people of coastal British Columbia used smoked clams as a standard of exchange. Clams were skewered on flexible cedar branches and hung from the ceilings of the cedar bighouses where the smoke from indoor fires would dry and cure them. Rings of smoked clams were traded for other goods such as bentwood boxes, bowls, baskets, blankets, canoes, etc. This might explain the origin of the use of the word "clam" as American slang for "dollar".

In addition to salmon, clams were an important food source for the First Nations people. This is obvious to anyone who has ever seen a coastal midden, which is essentially an enormous pile of clam shells. In the past, scientists thought that salmon was the staple of the coastal aboriginal diet and it was only relatively recently that this idea was challenged. It didn't seem possible that people could subsist on salmon year round, because the salmon run is seasonal and dried fish could not have lasted through the rest of the year. Additionally, some archeologists started to discover bones of smaller fish such as herring, smelt and anchovies by sifting through middens using sieves with a smaller mesh than had ever been used before. The discovery of clam gardens also was evidence of the large role clams played in the native diet. Drawing from a wide variety of food sources protected the aboriginal people against starvation when the salmon run was late or would fail. 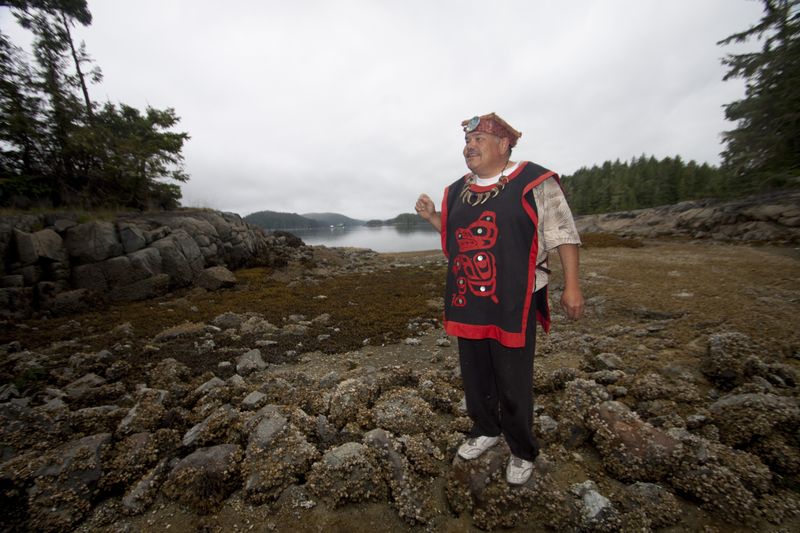 The existence of low rock walls along beaches in British Columbia in the intertidal zone had been known for some time but their origin and significance remained a mystery among non-natives. These walls are ubiquitous in the Broughton Archipelago, and have been found all along the Pacific coast, from Sitka, Alaska to Saanich Inlet in British Columbia. Some are monumental, measuring up to 2 meters high and 1.5 km long. Some scientists to questioned their human origin, proposing instead that they were naturally formed by kelp attaching to rocks and floating them toward one end of the beach at high water, driven by wind and waves, where they dropped and collected in piles resembling walls. It was only in 1995 when a geomorphologist conducting aerial surveys of the Broughton Archipelago determined that they were of human origin. Finally, archeologists consulted Kwakwaka'wakw elders who had known what they were all along: they had even worked on the clam gardens, knew their Kwak'wala names and shared their oral histories.

Clam gardens, or lo'hewae, as they are known in Kwak'wala, are formed by clearing a beach of rocks and boulders as clams are harvested. The rocks are used to build low walls running parallel to the beach in the intertidal zone. This forms terraces which raises the level of the beach and creates flat areas where the water can pool -- a perfect habitat for clams. The existence of ancient clam gardens adds to the evidence that the aboriginal First Nations people actively managed their marine food sources, and practiced sustainable aquaculture for at least the past 2000 years. 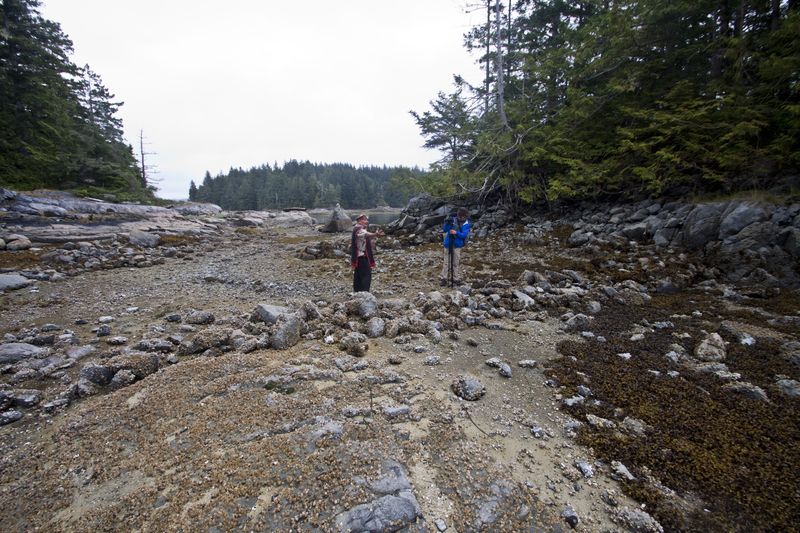 Andrew and Tom. The low rock wall and flat beach of a clam garden is clearly visible. Photo © Katya Palladina